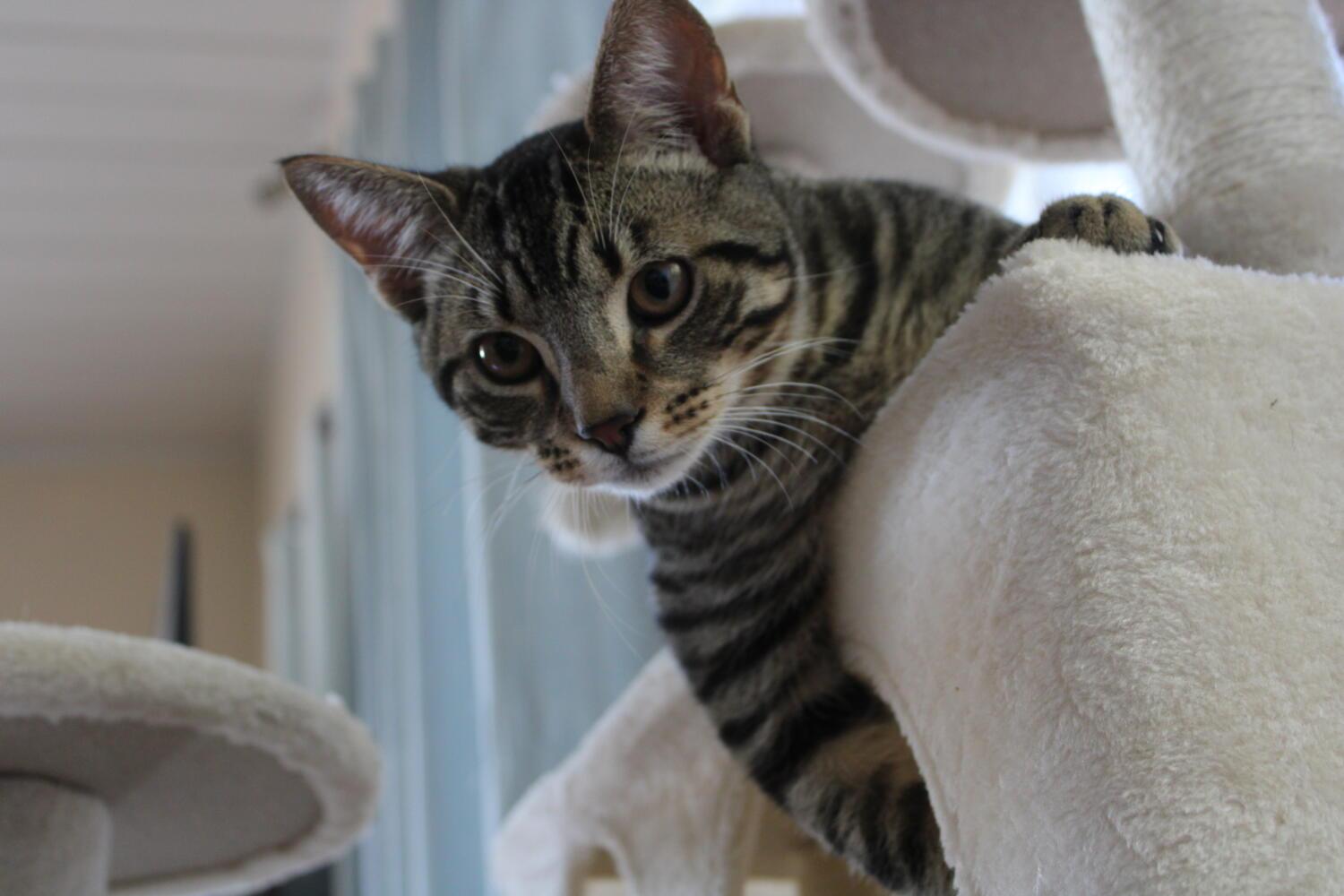 CAT PATROL — One of Leo’s favorite spots in the house is the cat tree. From the highest position, he is able to watch over the entire living room, monitoring each of my family’s activities. Photo: Andrew Xue

OPINION: The great catastrophe: My experience living with daily allergies

It starts with a tingle in my nose; the same feeling you get when you are about to sneeze. I choose to ignore it, but minutes later, as the circulation of air in my nose stops, I can’t help but feel an incoming waterfall. Sprinting to the bathroom to grab tissues, I realize upon looking in the mirror that my eyes have become watery, and my nose resembles Rudolph the Reindeer’s.

According to an anonymous opt-in survey by Verde of 226 Palo Alto High School students collected from Sept. 7 to Sept. 14, nearly 73% of respondents indicated that they would not get a pet they were allergic to and 90% of students do not live with a pet they are allergic to. I, on the other hand, have had the lovely opportunity to see Leo every day for the last three months.

It makes sense that most people who have pet allergies would never choose to live with a pet they were allergic to. After all, dealing with sneezes and a runny nose while you eat, shower and do homework is simply not ideal. But not only have I grown used to it, but I also don’t think the experience is as bad as it seems.

While most high school students are woken up the shrill ring of an alarm, or maybe a knock on the door from their parents, I am awoken by a series of disruptive noises and the aggressive shuffling of my blankets, followed by tiny, yet surprisingly powerful, paws poking my leg.

At the young age of 4 months old, Leo has already developed the power to push my bedroom door open to wake me up. After slipping through the tiny opening he makes in the doorway, Leo climbs the sides of my bed frame, causing a huge ruckus that aids him in his journey to get my attention. He immediately starts grabbing and poking at my blanket causing a great disturbance to my sleep; the combination of a sudden runny nose from my allergic reaction and several pokes to my leg is, in my opinion, a wonderful way to start the day. 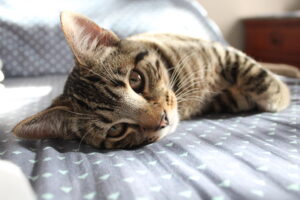 NOONTIME NAPS — Because Leo doesn’t really do anything on a day to day basis, much of his time is spent napping on my mom’s bed even though he has his own tent. Photo: Andrew Xue

But it gets even better. The bathroom is normally the one place most people can expect to go at least a few minutes without interruption, but by the time I’m out of bed and headed towards the bathroom, my cat is already there, waiting, as if he knew what my next move was going to be. There is nothing I can do to push him out so I let him stay there, staring at me while I commence my morning routine. He watches me when I brush my teeth, while I shower even while I poop — nothing is “TMI” for Leo.

On mornings where I have a fifth period prep, aside from getting whatever extra sleep Leo lets me have, I tend to spend the extra minutes of my morning petting my cat as I get ready for school. I know coming into close proximity with Leo is terrible for my allergies, but I simply can’t resist giving him a belly rub after he flops over right in front of me. Think of me like a lactose intolerant individual who can’t resist giving in to their ice cream cravings — except replace the ice cream cravings with the urge to pet my cat.

However, soon enough, petting my cat becomes my biggest regret. As I leave my house, the fading dopamine turns into dread, as I anticipate the incoming sneezes and runny nose; by the time I sit at my desk in 6th period math, I cannot stop sniffling. My allergies are thankfully masked by the voice of my teachers, but during a recent quiz we had, my constant sniffling broke the absolute silence of our class and attracted awkward glances from those around me, as I tried my best to look undisturbed. And even though students aren’t allowed to get up and move during tests or quizzes, I can’t help but notice that, with every sneeze, there are people around me who scoot a couple of inches in their chair, in the opposite direction.

By the time I bike home, the thoughts of my cat and the consequential allergic reactions have already slipped out of my mind, so I am always shocked to see him perched up on the cat tree as I walk in. Leo seems undisturbed by my entrance so I waddle over — approaching slowly and making no sudden movements — as I attempt to pet him. As I reach out my hand, he flinches, hops down from his tree and darts away. Why does he do that? Even after spending countless weeks in the presence of Leo, I still cannot comprehend how he can be so affectionate at some times, while so cold at others.

He watches me when I brush my teeth, while I shower even while I poop — nothing is ‘TMI’ for Leo.

Hours later, I head to the kitchen to make myself dinner and there he is, his head tilted whilst his gaze captures my every move. Ugh, it’s you again. I can’t help but recall that just hours ago, my cat thought I was a monster and tried to escape my grasp. I fling my hands to shoo him away, but instead of fleeing like last time, he creeps closer, like an explorer ready to venture through a jungle of ingredients.

His first target is the eggs. The snow-white outer shell seems irresistible to Leo, as he relentlessly pushes the eggs back and forth in an attempt to keep up with what he thinks is a rolling, circular toy. Next thing I know, while I am frantically preventing the eggs from falling onto our kitchen floor, Leo finds his way on

to our stovetop and into the cooking pan.

After securing the eggs in a place where my cat can’t reach, I pick up the pan, dump Leo out and head towards the sink to wash off any remnants of cat fur that could have stuck to the pan. Before I can even take three steps, I hear a thunderous crash followed by tiny clinks and the sound of my cat running away. I know exactly what happened. I turn around to find the plate I was going to use, shattered into thousands of pieces, and the culprit has already escaped the scene. 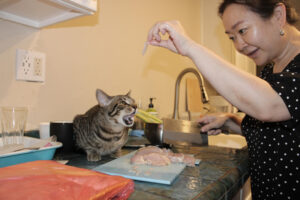 CHICKEN CRAZE — Aside from the daily meals Leo gets, it’s also a common occurrence for our cat to join us at the dinner table and in the kitchen. He loves feasting on anything my mom cooks; one of his favorites is chicken. Photo: Andrew Xue

Great. Another one of Leo’s messes that I now have to clean up.

To this day, my family has yet to drop Leo off at a local shelter. And we never will. My mom loves Leo so much that her bed has turned into his playground. My brother was the one who initially wanted a cat and can’t seem to stop taking pictures of him. And my dad has recently come to appreciate Leo’s company whenever they sit in the living room and watch sports on the TV.

When I think about it, in less than 4 months, Leo has made my family happier than I can ever recall, and ultimately, that is all I could ever ask for; the affection and warmth he spreads throughout my family will always hold a special place in my heart and is easily worth the trade-off of my allergic reactions. I can’t believe that I am saying this but, despite the pain you cause in my life, thank you, Leo.