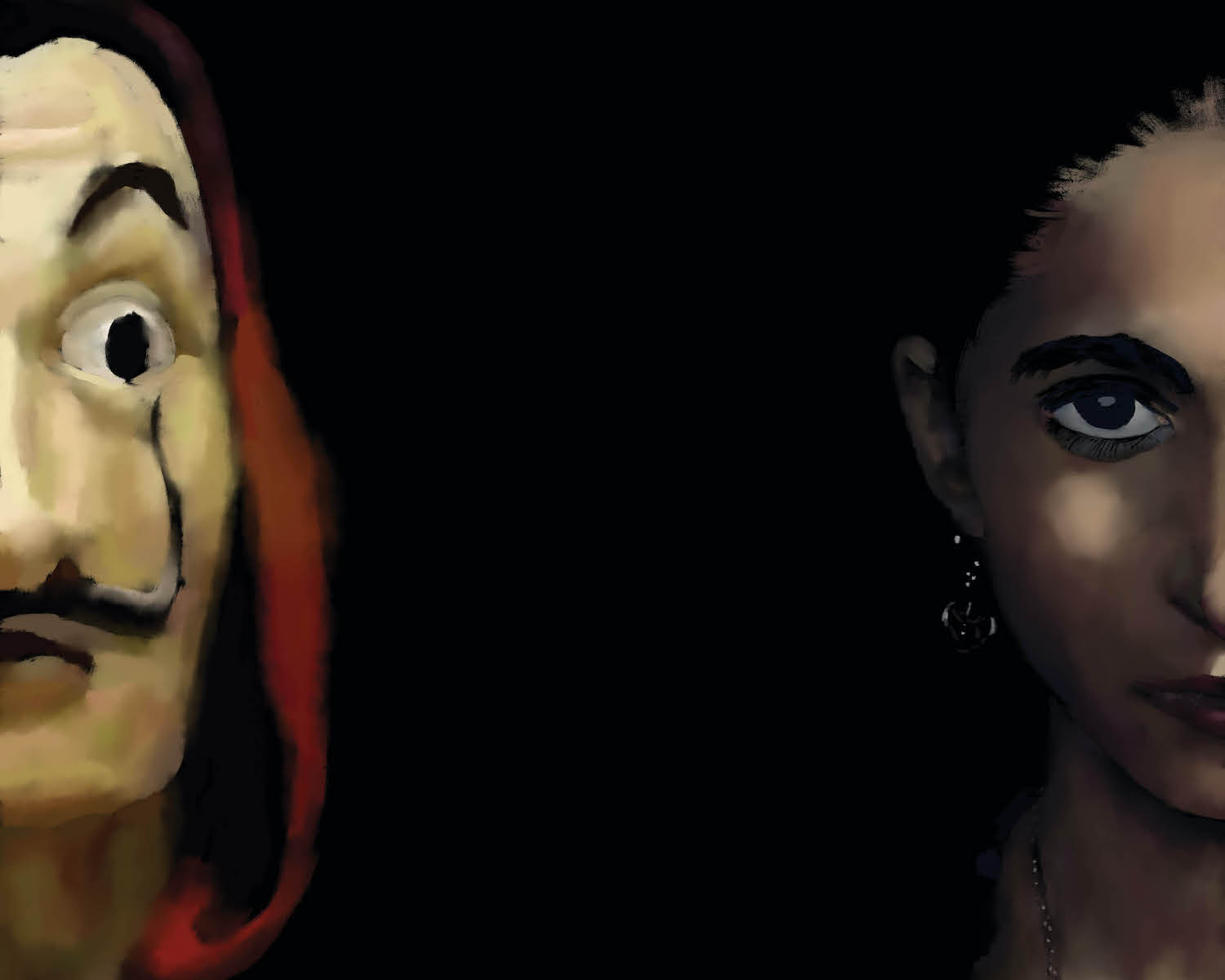 WHEN THE MASK COMES OFF — Nairobi (right) is a strong, feminist character. Like the others in her gang, she wears a plastic mask based on the artist Salvador Dalí and a red jumpsuit (left) in the show “Money Heist.” Art by Selena Cao

An oddball group of criminals are led by a shy but brilliantly intelligent man known as El Professor (Álvaro Morte), The Professor, as they plan and execute extraordinarily complex robberies in the center of Madrid, Spain. This is “Money Heist” — known to its Spanish audience as “La casa de papel,” The Paper House — a subversive Spanish thriller that just released its fourth season to Netflix viewers this April.

But “Money Heist” is much more than a crime thriller; it covers topics such as gender roles, patriarchy, sexuality and government corruption, and has produced symbols of resistance that are now used by activists all over the world. This is the binge-worthy show you have been searching for to occupy you during the long COVID-19 shelter in place, and you might even consider it educational.

“Money Heist: The Phenomenon,” a recent behind-the-scenes documentary about the show, discusses the unprecedented global response of viewers. The show’s Salvador Dalí masks, red jumpsuits and catchy “Bella Ciao” tune — an Italian protest folk song reimagined for the series — have been seen in protests across the world.

In October 2018, students in Rome donned masks and jumpsuits to protest the country’s new financial reform which, they argued, would jeopardize education, according to Getty Images. In Iraq, activists dressed in these outfits performed a tweaked version of “Bella Ciao” in an anti-government music video in November 2019, The Manila Times reported. According to the documentary, the outfits have also been used in political protests in Lebanon, Iraq, France and Chile.

The show’s Salvador Dalí masks, red jumpsuits and catchy “Bella Ciao” tune — an Italian protest folk song reimagined for the series — have been seen in protests across the world.

What sways the audience away from viewing the characters as criminals and rather as a symbol of resistance against government corruption is not just their charming personalities, but also how they commit their crimes: They steal the money from a mint, and therefore no private businesses or people lose out, and they do their best to share it with the public, all while minimizing harm to hostages.

The show brings out the inner rebel in people, inspiring viewers to constantly question the system.

Gender is always a topic of discussion in “Money Heist.”

The show does not shy away from patriarchal figures in denial of their existence; rather, it presents them in all their sexist glory, only to analyze their being detail by detail with the help of some savvy feminist characters.

Berlín (Andrés de Fonollosa), the designated leader inside the mint, repeatedly rapes and psychologically tortures a female hostage throughout the heist. However, Berlín is one of the audience’s favorite characters.

“There’s nothing better than a villain who also provokes feelings of empathy,” Álex Pina, “Money Heist” creator, executive producer and screenwriter says in “Money Heist: The Phenomenon.” “He’s a misogynist, a narcissist and a psychopath in many ways, but we could have a character like that in the series and the audience could freely decide whose side they’re on.”

“Berlín is not in an able condition, so from now on I am in charge myself. Let the matriarchy begin.”

Although the show lacks female representation, the few women included are complex and strong. Nairobi (Alba Flores), for instance, is a dedicated leader and a compassionate person. She is always ready to call Berlín out on his sexism in support of herself and the other female characters.

“Berlín is not in an able condition, so from now on I am in charge myself. Let the matriarchy begin,” Nairobi says in a particularly moving moment of the show.

The show’s Spanish take on love and friendship is also refreshingly affectionate compared to the often stiff portrayals of American cultural norms.

“For a long time, there was an unwritten rule that action films were inane and superficial and very dramatic, or emotional films were boring. So what we did was mix those two concepts,” Pina says.

“Money Heist” also serves as a reminder of the value of foreign cinema. English speakers too often close their minds to the somewhat obscure ‘foreign language’ category, and in doing so miss out on the opportunity to better understand other places and cultures.

People see themselves in the characters, who are the heart and soul of the production.

Not only did the show win an Emmy for Best Drama Series in 2018, but it was also IMDb’s second most popular TV show in the world for a time, according to the documentary. Everywhere, people feel a connection to this series.

It’s not that the plot of “Money Heist” is particularly relatable — how many people rob a mint on the daily? It’s that people see themselves in the characters, who are the heart and soul of the production. Whether you identify more with Helsinki (Darko Perić), a loveable sweetheart; or with Nairobi, a driven leader; or even with Berlín, a cunning manipulator, this show is for everyone, including you.