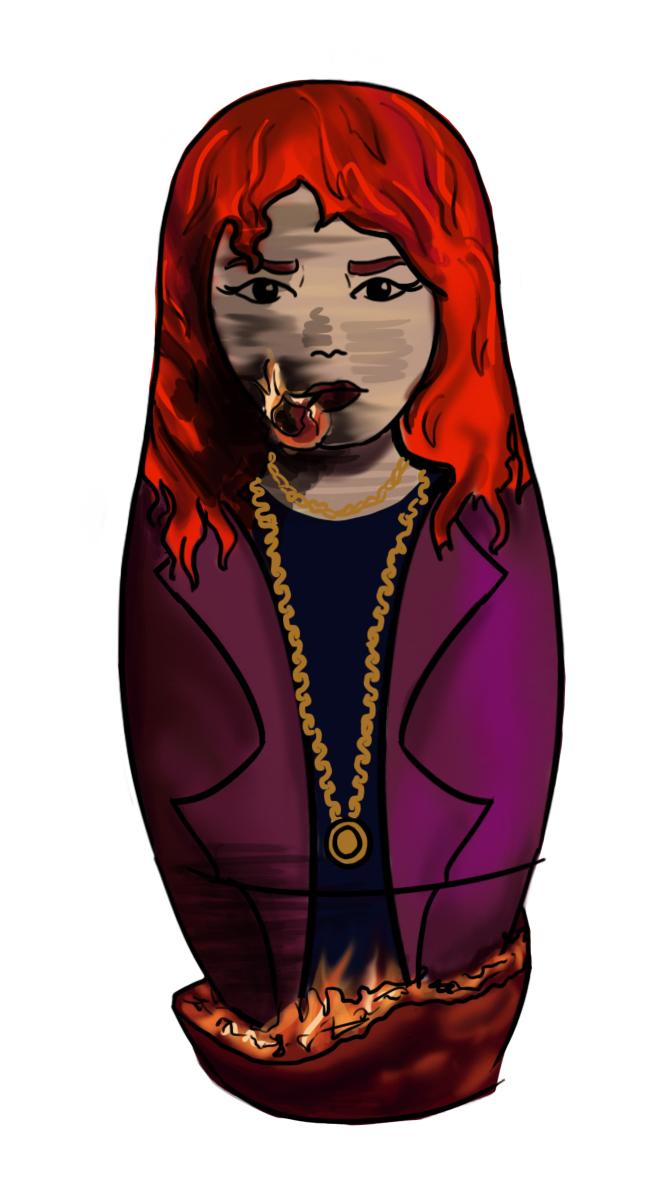 The rush of running water plays over a thumping beat as the camera cuts to a close-up of a woman staring directly through the screen. The title flashes in large, red letters: “Russian Doll.” As she turns off the faucet, the camera pans to reveal a dim bathroom adorned with a gold mirror; before it, she stands alone. The viewer becomes incredibly familiar with this scene, as it is where software engineer and birthday girl Nadia Vulvokov (Natasha Lyonne), the main character, returns every time she is reincarnated.

Comedy series “Russian Doll” relies on your typical “Groundhog Day” trope — one where the main character is forced to repeat a day until they resolve an issue or right a wrong. From “Happy Death Day” to “Before I Fall,” many films and TV shows have adopted this archetype over the last few years. Now “Russian Doll” is the most recent to join their ranks.

Released by Netflix on Feb. 1, “Russian Doll” is yet another streaming service original that has recently leapt to popularity. The eight-episode series received positive feedback from critics, with online news outlet Vox praising the show’s unconventional casting and its placement of men in traditionally female roles.

While this version is a little darker than “Groundhog Day,” with Nadia dying at the end of every day, rather than just going to sleep, the premise is the same — she is doomed to continue in this cycle, reliving her birthday party and the night that follows, until she fixes some issue with herself — perhaps lingering trauma from her childhood or simply figuring out what caused the loop.

Despite this slight twist, however, much of the plot is repetitive and lacks originality, particularly because of Nadia’s excessive number of incarnations. The audience expects that Nadia will be reincarnated many times throughout the show’s eight episodes, and the story is not very innovative. Although the writers attempt to keep the audience’s attention by teasing viewers with clues to the reason behind the time loop, after a few leads do not pan out, it is easy to lose interest in these hints.

Regardless of the lackluster story, the show has quite a few good jokes, and we found ourselves laughing despite the repeatedly grim plot of death. Nadia is crude and direct, leading to entertaining interactions between her and the other characters. As she grows increasingly frustrated with her predicament, Nadia becomes more unhinged and insensitive to others, resulting in dark yet humorous scenes.

At one point, Nadia becomes so angry at her friend, who she believes gave her a cigarette laced with drugs, that she takes a raw chicken and throws it on the floor, at which point the viewer does not know whether to be scared or entertained. In another reincarnation, she trips over an open cellar door in the middle of an argument on the phone, falling to her death. She immediately returns to the same place, only to fall into the same cellar. Although she dies, she instantly comes back to life, allowing the viewer to laugh at Nadia’s clumsiness.

“We found ourselves laughing multiple times despite the grim plot of death over and over again.”

The show also contains more emotional scenes which allow the audience to sympathize with Nadia. She is usually tough, brushing off her situation with crude jokes and messing around because she knows the day will just start over. But certain scenes offer a rare glimpse behind her steely exterior.

For example, while searching for the reason behind her time loop, she visits a Yeshiva school — a Jewish educational institution. When Nadia first meets the secretary, she is aggressive but becomes more solemn and subdued as they talk. She then asks what the prayer is for protecting someone in danger, and the secretary tells it to her, giving the translation “angels are all around us.” Their exchange reveals a crack in Nadia’s facade, portraying her genuine worry about the outcome of this time loop and whether she will actually get out of it alive.

Other shots depict Nadia’s brief moments of happiness, particularly when interacting with her cat, Oatmeal. Whenever she sees the cat, her face lights up and her worries drift away. Oatmeal burrows into her lap as Nadia looks into the distance. Despite her morbid circumstances, Nadia still manages to find joy in simple pleasures.

Lyonne depicts Nadia’s rough sentimentality perfectly. She switches seamlessly between a gruff, almost rude persona and that of a caring woman trying to make it through the night. She is obviously intelligent, but does drugs in her spare time and regularly uses profanity. This complex, candid character offers a refreshingly real depiction of hardship. Lyonne’s acting prowess also allows the tone of the show to switch in mere seconds, shifting from a touching scene where she spends the night with a homeless man to one where she sardonically reappears in the bathroom, complaining about her new death.

Each time Nadia reappears at the party, the same upbeat song plays, repeating to create a starker contrast with the dark reality of her situation. The show also uses sudden, loud grating sounds that startle the audience when a scene is about to change or something important is about to happen. This audio contrast keeps the audience on the edge of their seats, waiting for the next  change to signal an important moment.

Despite its dark motifs, Russian Doll is an entertaining watch, incorporating a wide variety of jokes without missing the authenticity that some comedies lack.  While Russian Doll’s plot may be monotonous at times, the show effectively combines wonderful humor with more serious themes of fear and vulnerability, keeping the audience hungry for more. Though a second season has not been confirmed, the show was pitched as a three-season series, so it is likely that fans of the show will see Nadia before her mirror yet again.