Chewy rice cakes topped with sweet red beans, long and stretchy noodles covered in savory broth, plump piping-hot dumplings — these are just a few of the decadent dishes enjoyed by people of East Asian descent around the world as they ring in the new year.

While most Western countries follow the Gregorian solar-based calendar, many Asian cultures traditionally follow a moon-based calendar, resulting in the celebration of the Lunar New Year in February. Lunar New Year is one of the most important holidays in East Asian cultures, and is met with large family gatherings, ceremonial gifts of money and feasts of traditional delicacies.

According to a Verde opt-in survey of 144 Palo Alto High School students conducted from Feb. 1 to Feb. 11, over 29% of Paly students celebrate Lunar New Year. Verde took a closer look at some of the ways students from three different countries eat traditional foods to celebrate the holiday, and sampled traditional New Year’s dishes from a selection of local restaurants.

Chinese New Year, also known as the Spring Festival, is a 16-day holiday traditionally dedicated to honoring ancestors and coming together as a family.

Junior Julian Kobayashi, while having both Chinese and Japanese heritage, historically celebrates Chinese New Year with his immediate family by going out to eat at a traditional Chinese restaurant. However, due to COVID-19, Kobayashi and his family have altered their plans for this year’s celebrations.

“A lot of the restaurants we like to go to have been moved to takeout,” he says. “We are going to order takeout and just eat at home instead.”

Red symbolizes good fortune and happiness in Chinese culture. According to an ancient legend, a demon would terrorize villages and their livestock around the New Year. So, because the demon was afraid of the color red, it became a New Year’s tradition to decorate houses in red banners, give money in red envelopes and eat reddish-tinted foods.

We sampled a traditional Peking Duck ($46) at the Peking Duck restaurant located on California Avenue.

We tucked the tender duck meat into discs of mantou, a sweet and savory bun, and enjoyed this quasi-sandwich with a sweet sauce and fresh green onions. The rich flavor of the duck, the doughy texture of the mantou and the sweet and salty tang of the sauce combined for a perfectly balanced entree.

QUACK OPEN YOUR MOUTH — Peking duck, from a restaurant of the same name, is a traditional New Year’s delicacy for many people of Chinese descent. “My family usually goes out to a fancy Asian restaurant … and [usually] … we like to eat duck,” junior Julian Kobayashi said. Photo: Jonas Pao

Korean New Year, also known as Seollal, is a three-day holiday. This festival is a time for Koreans to see their friends and family, and also pay respects to their ancestors. 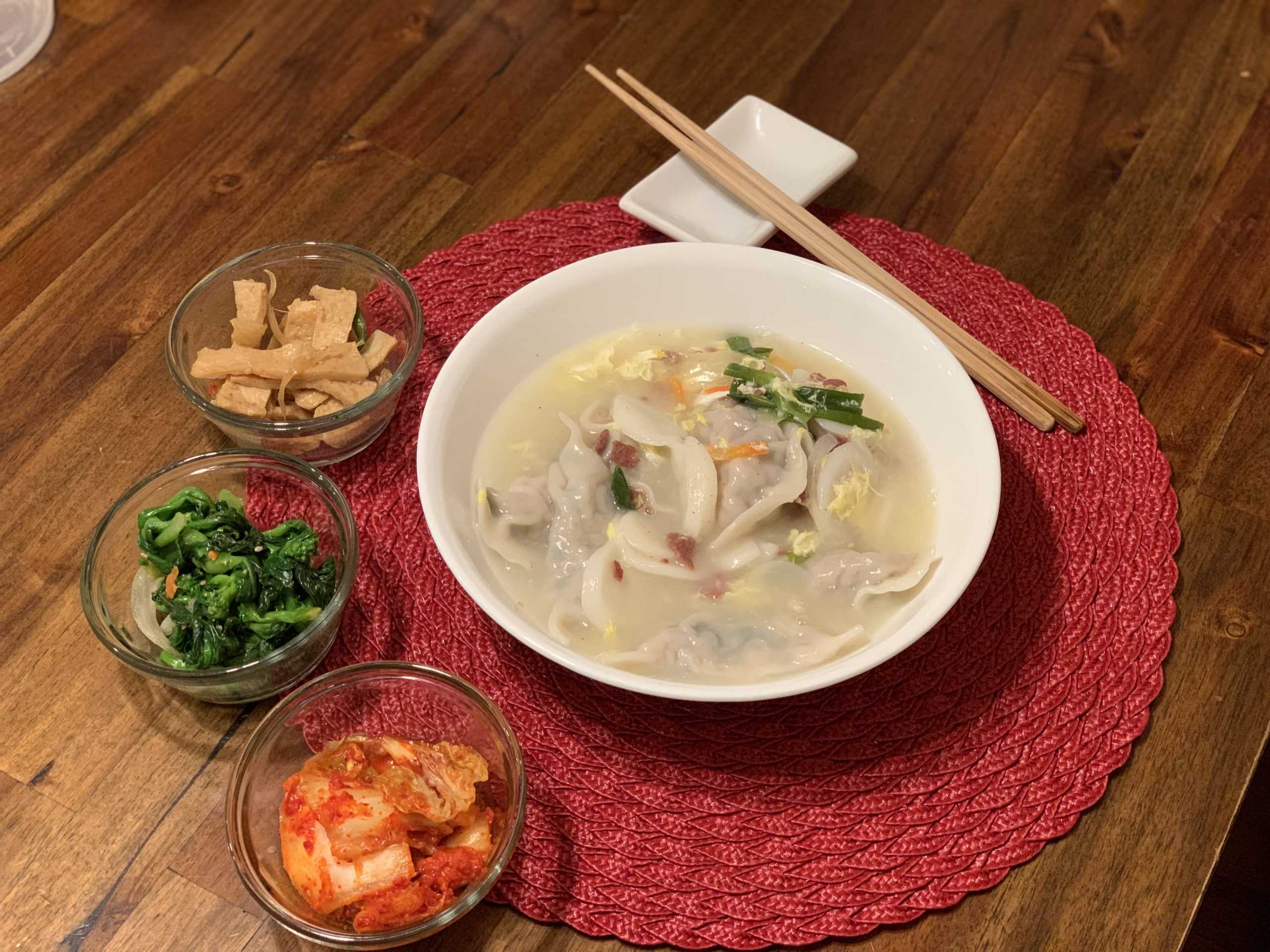 “The concept is that when you eat the soup, you grow a year older,” Jeong says.

Traditionally in Korea, birthdays are not as special as they are in the United States and instead, aging is associated with the New Year and the eating of a bowl of Duk Gook. Some Koreans even use the expression, “How many bowls of Duk Gook have you eaten?” to ask others their age.

The tradition of eating Duk Gook to mark one’s age is thought to have emerged due to the scarcity of rice in ancient Korea. People would save their rice for Seollal and have a collective birthday feast for the entire family.

The white color of the rice cakes in the soup represents purity, while their disc-like shape symbolizes prosperity.

We sampled a traditional rice cake and dumpling soup from Su-Dam Korean Cuisine in the Village Shopping Center in Los Altos.

The Duk Man Doo Gook soup ($11.99), packed full of soft and sticky rice cakes and plump pork dumplings, came together to deliver a savory, rich and complex taste. Tender meat and rich dumplings enhanced the salty flavor of the beef broth, and the kimchi, a spicy fermented cabbage condiment, added a delectable heat.

Japanese New Year was originally celebrated during the Lunar New Year like most other Asian countries, but cultural shifts have led some Japanese people to celebrate on Jan. 1.

Junior Kyoka Hiroshima typically celebrates Japanese New Year on Jan. 1 with her family by eating mochi, a type of chewy rice cake. The stretchy texture of mochi symbolizes longevity, and is a common sweet or savory treat eaten by Japanese people to celebrate the new year. While many Japanese-Americans buy their mochi at the store, Hiroshima’s family likes to go the extra mile.

“Not a lot of families do this, but my family likes to make mochi,” she says. “It [mochi making] is a pretty long process.” 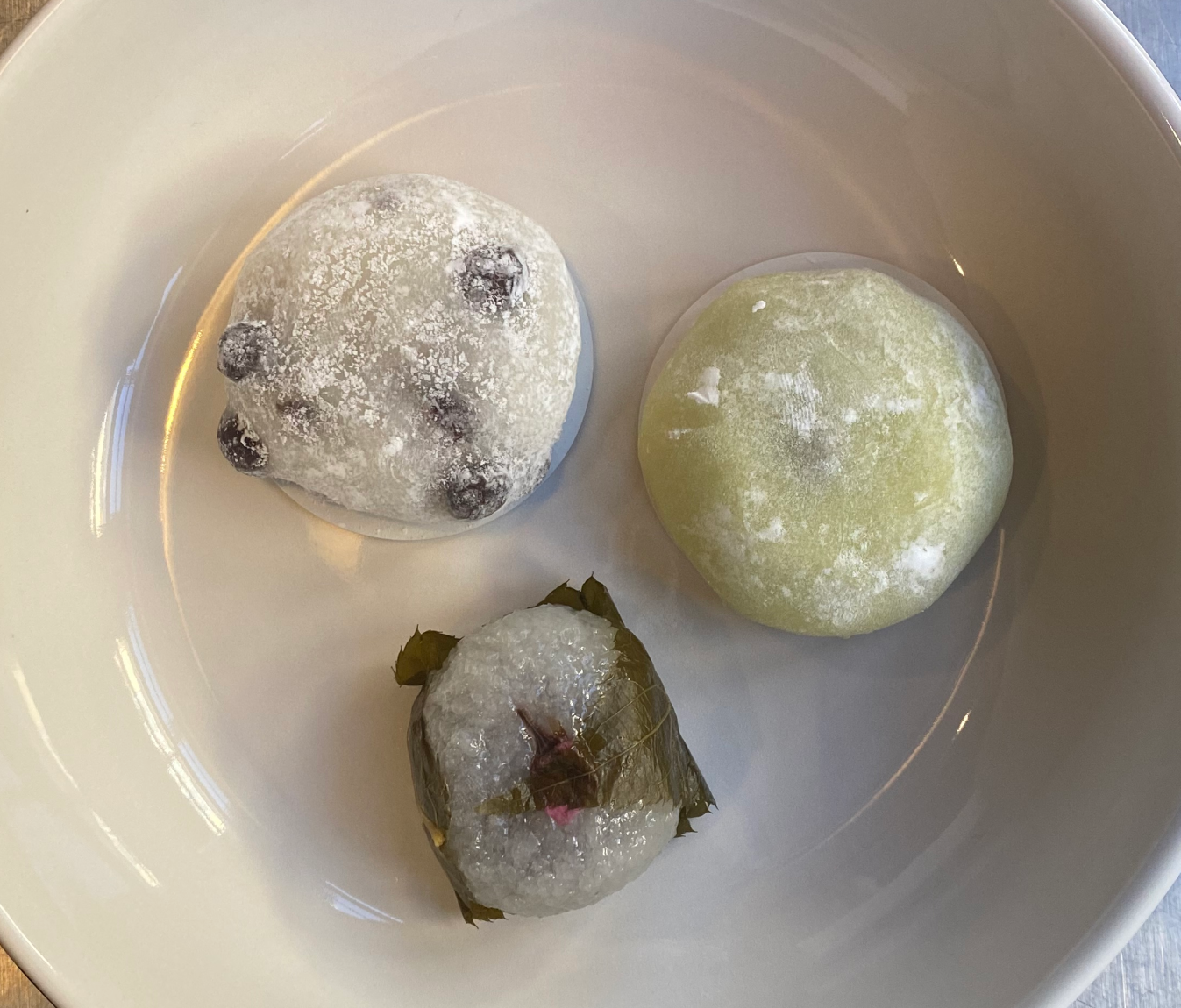 MOCHI MADNESS — Mochi, a traditional Japanese rice cake is a favorite food of many Japanese people during the New Year, and we sampled three varieties of this confectionary treat from K. Minamoto. “My favorite [New Year’s food] is definitely mochi,” junior Kyoka Hiroshima said. “There are a lot of different garnishes and … ways to eat it.” Photo: Akhil Joondeph

While mochi-making is laborious, Hiroshima enjoys this tradition as it brings her entire family together.

“We invite a lot of family friends over and we make mochi together,” she says. “My favorite [New Year tradition] is definitely that.”

The subtle flavor of red bean and creamy texture of chestnut encased in chewy mochi made the Kuridaifuku ($4.60) a very pleasant bite, though the chestnut was not particularly flavorful. Accentuated by the slightly oceanic flavor of salted cherry blossom, the Sakura Mochi ($5.10) was a perfectly balanced harmony of sweet and salty, with a wonderful chewy texture from the mochi. Intense red bean flavor permeated the Mame Daifuku ($4.60), and the grainy and slightly crunchy red beans folded into the mochi provided an interesting textural contrast to the soft rice cake.