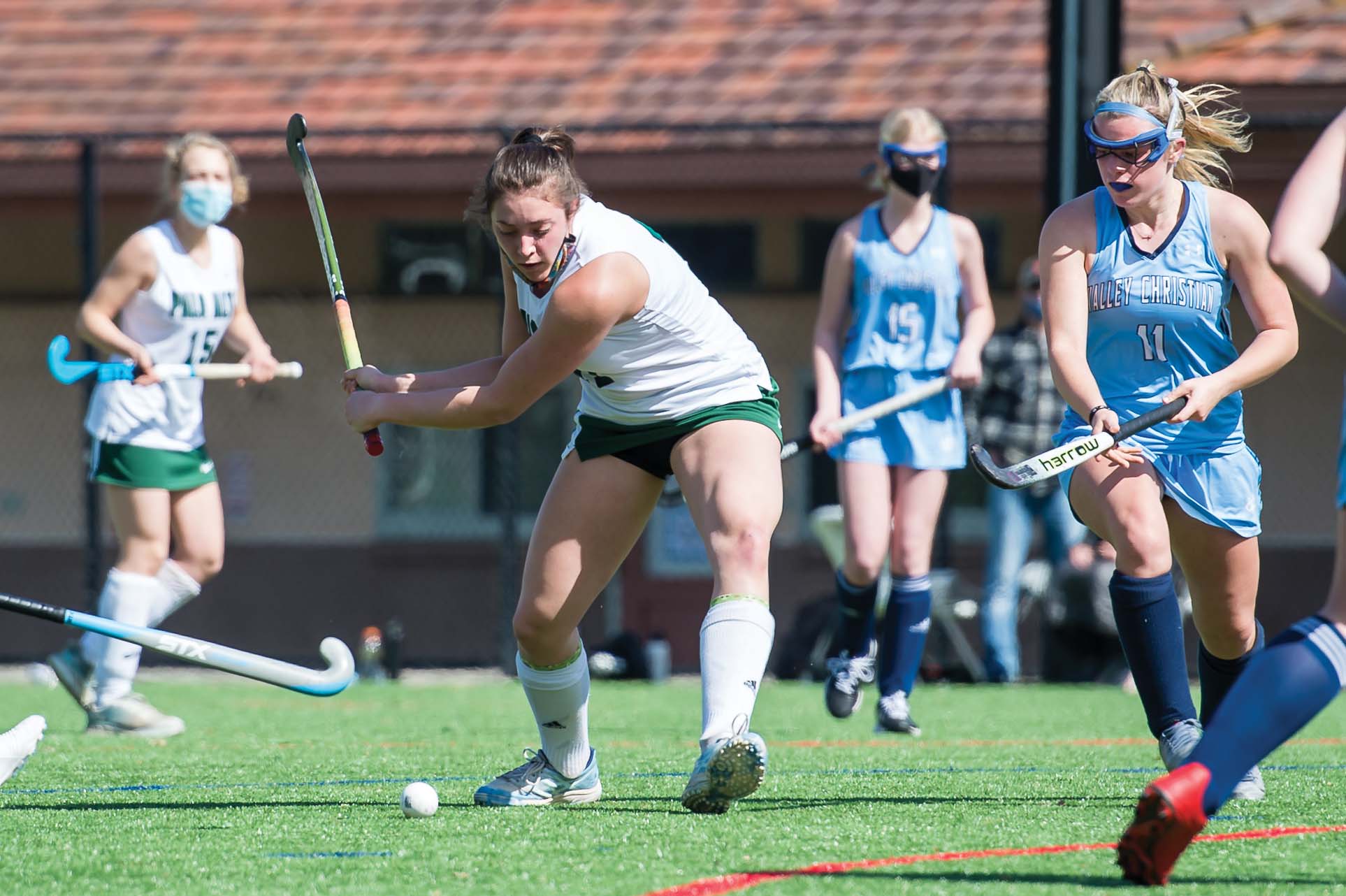 DRIBBLE AND PASS — Senior Alexa Gwyn sets up a pass for a fellow teammate in a home game against Valley Christian. The game was one of their eight wins this 2021 season. “Our chemistry imrpoved because we stopped being so focused on our own playing,” Gwyn said. “We started focusing on the way the team was playing as one, which was really awesome to see.” Photos: Jenna Hickey

Leaving their legacy behind: The journey of field hockey trailblazers

Dribbling the ball with her field hockey stick, Palo Alto High School senior Alexa Gwyn darts down the field to the opposing team’s goal. The video shows her teammates following and supporting her, working in tandem after years of playing together. She takes a deep breath, looks at the opposing team’s goalie and shoots, scoring the point. 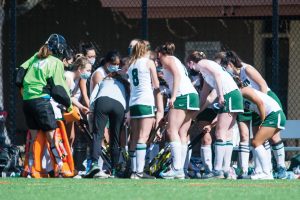 HUDDLE UP — The Paly Girls Field Hockey team meets before their big game against Valley Christian. Paly won, 5-0. “It’s just so awesome to look back at our first year and think about how we took our record of losing almost every game and basically inverted it,” senior Hallie Faust said.

When Gwyn moved from Australia in middle school, she was determined to continue playing her favorite sport.

“I’ve been playing field hockey since third grade,” Gwyn said. “So when my mom said that we might be moving to America, I told her that I would move only if there was field hockey because I loved it.”

Although there were club teams that Gwyn could join when she first moved, Paly did not have a girls field hockey team. With many costs for a coach, equipment and uniforms, the process to establish a team was complicated. However, the Athletic Department told her that they would consider her proposal if she could find students who were interested.

“I started a petition, and we got a bunch of people to sign it,” Gwyn said. “And then I started a club, and we got the A.D. [Athletic Director] involved.” Gwyn was not intimidated by the challenge and began the process of creating a team her sophomore year.

Soon an opportunity arose to introduce a new girls sport.

“Title IX states that if you introduce just a boys sport, you must also introduce a girl sport,” Gwyn said. “When boys volleyball was added, they needed another girl sport. And so we got to instate field hockey.”

During the team’s first season, few players had experience in the sport. However, senior Hallie Faust said that the lack of prior exposure made it easier to enjoy being a part of the team.

“Without so many high expectations and so much pressure and competition, the whole sport was much more enjoyable,” Faust said. “It was a relief to learn alongside others rather than feel like I had to catch up to everyone else.”

Like Faust, senior Madeline Lohse said she believes the lack of experience was beneficial in uniting the team during their first season.

“Working with a team with so many people that have never played before was comforting in a way because everyone was on the same boat,” Lohse said. “Overall, I think it made it … more community-like in the beginning.”

“It was a relief to learn alongside others rather than feel like I had to catch up to everyone else.”

More than a score

Throughout the years of learning and playing together, the team has evolved into a close-knit community.

“We’ve grown so much as a team, not only on the field but also off the field,” Faust said. “There’s a special bond with the group since we all were fairly new to the sport and it’s great to see how much closer we’ve gotten over the years.”

The players’ hard work, dedication and teamwork paid off in the 2021 season, which was their best season in three years with an 8-1 record.

“It becomes really obvious when a team’s improving,” Gwyn said. “You see it in the scoreboard, but also in the chemistry of the players. We knew where each other were at every point in the game and that’s why I think we won a lot of our games.”

Gwyn said a major contributor to the team’s success and camaraderie has been Head Coach Jenny Crane, a former field hockey player at the University of California, Berkeley.

“Her focus was less on winning, and was way more on character,” Gwyn said. “She says that if we win a game, but you’re really rude to the other team or aggressive and pushing other kids around, she doesn’t count that as a win. I think in her doing that, she taught us valuable skills about what it means to be a team.”

While Faust and Lohse are not planning to continue playing field hockey after high school, Gwyn will be taking what she learned at Paly to her team at Vassar College.

“I think one reason why I chose Vassar is the coach,” Gwyn said. “It’s a collegiate team — of course they want to win. But, he said that he builds his team off of character, and I immediately thought of Jenny.”

“We knew where each other were at every point in the game and that’s why I think we won a lot of our games.”

Even though Faust has played her final game and said goodbye to her fellow teammates, she will continue to root for her team.

“I really look forward to hearing about all the great things the team will do in the future,” Faust said. “I feel so grateful to have been a part of the inaugural team.”