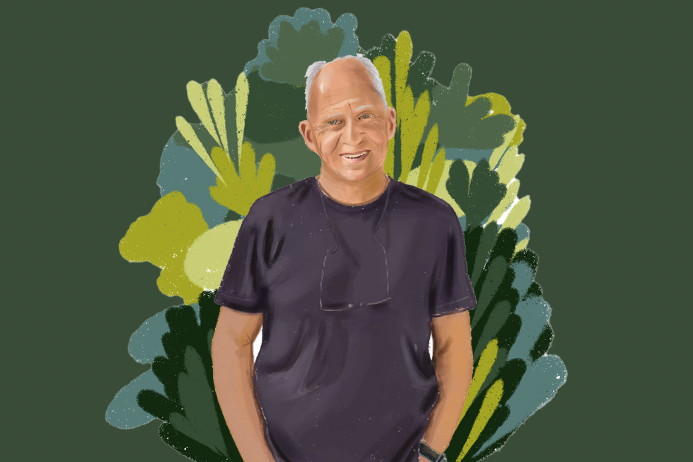 “He was a true leader — thoughtful, insightful and committed to making things better,” Friedland said. “Paly was made a much better place by his presence. And he will be missed.”

A supportive instructor, mentor and friend to many, Toma made a lasting impact on much of the Paly community.

Toma spent 27 years at Paly as a math teacher from 1994 until his retirement in 2021, and as the instructional supervisor for the Math Department from 2007 to 2016.

Toma is survived by his daughter, Emma Toma, who attended Paly.

A teacher, a supporter

Many of Toma’s former students remember his strict teaching style but agree that he nonetheless always supported and cared about them.

“Although his class was rigorous, the lessons I’ve learned from him I’ll never forget,” said freshman Aleksey Valouev, who was in Toma’s Algebra 2 and Trigonometry in eighth grade. “Beyond just teaching math, he has taught me valuable lessons in work ethic and perseverance, which have had a huge impact on my life today. His lighthearted yet professional personality and manner of teaching had a lasting impact on all of his students.”

“You could see by the way he taught his class that he loved his students more than anything else. He was someone who made sure that every student was learning.”

Toma’s love for teaching was apparent in his constant encouragement during his lessons.

“You could see by the way he taught his class that he loved his students more than anything else,” said senior Sam Duong, who was in Toma’s Algebra 2 and Trigonometry class during his sophomore year. “He was someone who made sure that every student was learning.”

His support extended beyond his math class; Duong appreciated Toma’s effort to alleviate stress on students.

“He was well aware of the pressures students felt being surrounded by other overachieving students and made sure he was fostering an environment that didn’t add to the pressure,” Duong said.

A colleague, a mentor

To many fellow teachers in the Paly Math Department, including math teacher Daniel Nguyen, Toma was more than a mere co-worker — he was a confidant.

“He comes off as very stern but deep down, he was a total softie and was always happy to help people and always had very high standards for us teachers,” Nguyen said.

Toma offered help to not only students but also fellow teachers. In fact, he was the one who helped Nguyen acquire a job at Paly and through subsequent challenges.

“He was almost like a guardian angel saving me,” Nguyen said. “He would guide me through difficult situations [he experienced] as a teacher.”

A friend, a family member

For others such as math teacher Natalie Docktor, Toma was like family.

Docktor met Toma in 1994, when he was first hired at the Paly Math Department. Since then, she developed a close relationship with Toma, walking during their breaks and eating lunch together.

“He was a very dynamic guy,” Docktor said. “We used to talk about everything we were doing inside the classroom but also outside the classroom. We became very close friends. We knew each other before either of us were married and had kids.”

Docktor described the Math Department as a family for its members.

“We would get together at Christmas, the beginning of the year, end of the year parties, and all of our kids would come,” Docktor said. “So our kids kind of grew up together too. Radu was a part of the Math Department family.”

“He was my friend. He was my colleague. He was someone I could go to with any issue I had about teaching.”

Docktor remembered Toma’s passion for adventures through sports and traveling. Toma had traveled to over 80 countries and was excited to add even more countries to the list after his retirement.

“He wanted to enjoy it, and it wasn’t even a year ago,” Docktor said. “So this [his death] just comes as a total shock. This was just tragic. This was so tragic.”

Toma will be missed by his family, colleagues and students alike.

“He was my friend. He was my colleague. He was someone I could go to with any issue I had about teaching,” Docktor said. “Radu was just a really great guy. He was there for all of us, and he had a good perspective on life. I’m gonna miss him.”