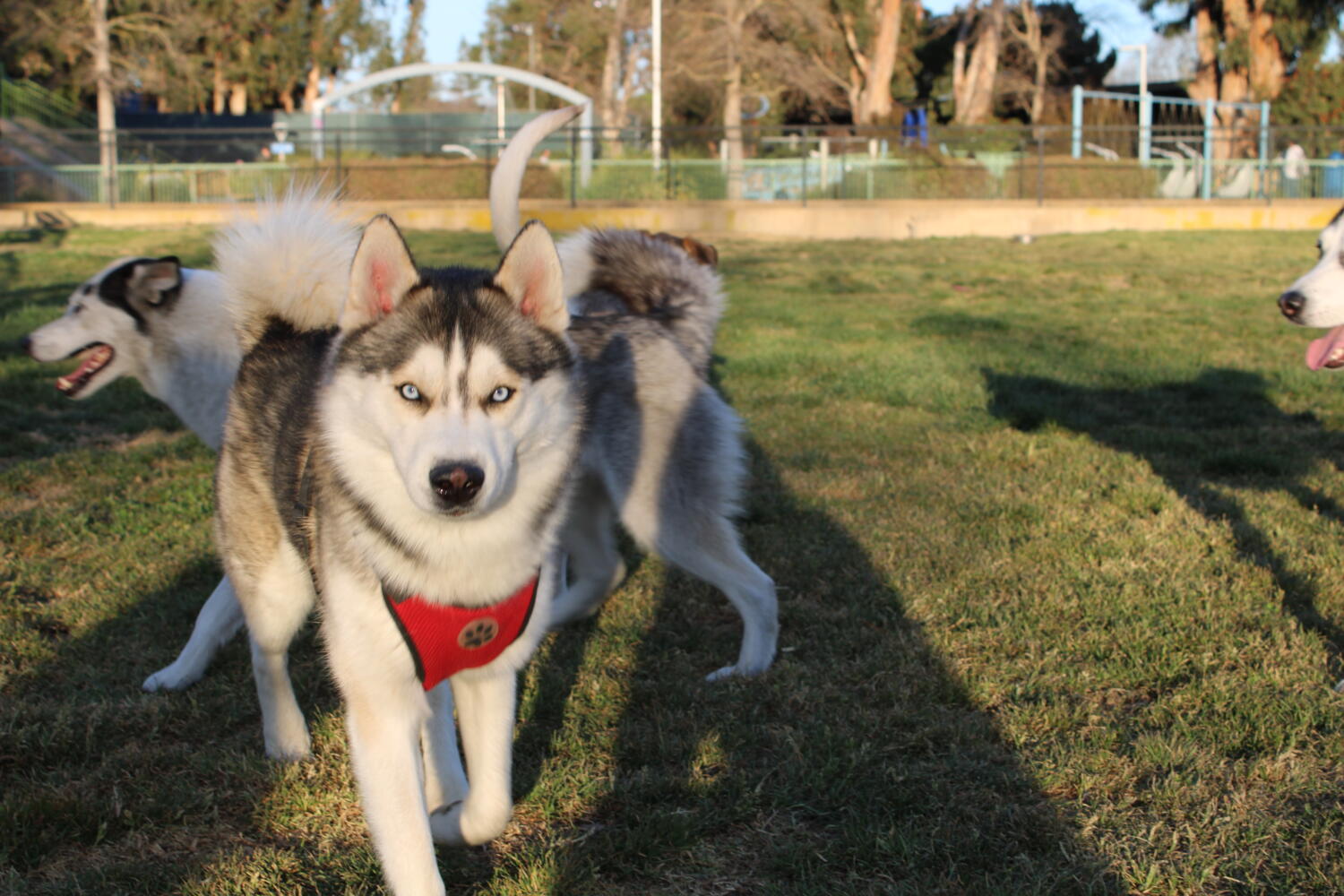 THE ONE WITH OCEAN EYES — Instagram-famous dog, Lambert, pauses to look at the camera during an outdoor escapade with his playmates at the Mitchell Park dog park. Photo: Palina Kuzmina

The warm sun beats down on the park and the crisp air fills with the sound of dogs barking and people laughing. The dogs travel in a pack, tackling each other — the chase for the ball has begun.

For many, dogs are an integral part of living in Palo Alto. According to an anonymous opt-in survey by Verde Magazine of 236 Palo Alto High School students, 40.9% said that they own a dog. A popular destination spot for many dog owners is the Mitchell Park dog park. The park is a great place for residents to walk their dogs, as well as build new connections. According to retired police officer and Palo Alto High School parent Allen Vugrincic, the dog park creates a community for the owners as well as the dogs.

“Especially with COVID … it’s social for them [the dogs] and it’s social for us [the owners],” Vugrincic said. “We didn’t know each other before the dog park, but now it’s like we hang out every day because we spend so much time here.”

Intrigued by the ubiquity of dogs in Palo Alto, we surveyed dog owners on the degree to which their dogs reflect their personalities. Here is what we found.

“It’s becoming clearer and clearer the longer we have him … I think he’s very much a reflection of me,” Salata said. “As much as I try to be low energy, I need to be active and to go out and have adventures and do fun things and get exercise [like Lambert].” 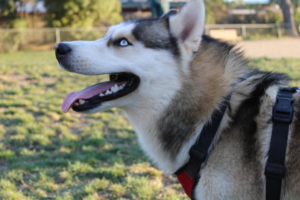 PLAYING IN THE PARK — Alaskan husky Lambert stops to take a breath while playing with other dogs at Mitchell Park.

Salata recalled a moment she shared with Lambert on her most recent trip to Lake Tahoe.

“There was a little bit of snow and [Lambert was] running around through the mountains and playing by the lake,” Salata said. “And there was this moment where we were sitting by the lake. And we had this quiet moment where [Lambert] just leaned on me. And it was this gratitude moment. And he was so happy.”

Salata adopted Lambert during the pandemic and said this would not have been possible otherwise.

“I’d always wanted a husky … and had the pandemic not happened, I most certainly would have been working in an office and would not have had the time to be able to be at home and be a good dog parent,” Salata said.

Salata also enjoys sharing her relationship with Lambert through social media and has gained a large following of 14.4k on her Instagram account @lambert.the.husky.

“It’s a fun, creative outlet,” Salata said. “And I try to just capture what he brings into our life with all of the humor and silliness and sweetness, and just kind of share that with people.”

Although Salata has only had Lambert for a little over a year, she said she cherishes the bond she has built with him, and can appreciate the similarities they share. 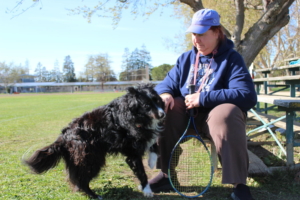 THE CURIOUS ONE — Border collie Fern rushes to retrieve her tennis ball to her owner Elan Winkler during playtime in the park.

Elan Winkler, a Palo Alto resident, said that she enjoys the company of her Border Collie, Fern, as they have similar personalities.

“She’s a little reserved, she’s quiet, she loves people, she especially loves kids,” Winkler said. “So I think she does [reflect me].”

“Fern and her littermates were found abandoned in a field when they were about six weeks old,” Winkler said. “And this family took her and one of her littermates and kept them for about six years. And then they had two children and decided two dogs and two kids were too much. So they gave her up.”

“[Fern is] incredibly smart, she knows a ton of vocabulary, loves to play with her ball,” Winkler said “We have at home what we call her big red ball, with ropes coming out of it. She’ll let you take it. She’ll bring it to you.” 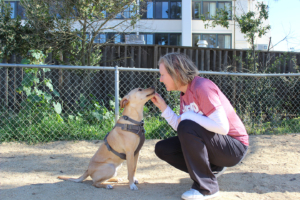 THE CHEERER UPPER — Accountant and dog owner Vivian Martin said she feels that her dog Buzz always has a way of cheering her up.

“He has an attachment to us and loves us so much that when we feel down, he makes us happier,” Martin said. “And he takes joy in the same things that we do. I think he sort of mirrors our life in a way.”

Martin said she remembers when Buzz was a puppy and would cuddle up with her and her family on the couch.

“He takes joy in the same things we do. I think he kind of mirrors our life in a way.”

“When he was little, he used to sit in our laps and when he sleeps, he sleeps

in the shape of a croissant,” Martin said.

A pleasant memory Martin recalled of Buzz is her daily greeting when she returns from work.

“[Buzz] sits on the edge of our couch and waits for us to come home,” Martin said. “And so when we come in, he stands up on the couch and he wags his tail crazily — just such a nice way for us to come in because he’s so happy to see us.”

Martin said she feels that Buzz’s unconditional love always cheers her and her family up.

“He makes me smile, he makes our kids smile, and if you have a bad day, you come home from school, you didn’t get a good grade on a test, Buzz doesn’t care; he just wants you anyway,” Martin said.