Stories have the amazing ability to whisk us into another realm. They open doors we didn’t know existed and guide us through worlds both foreign and familiar. We only have one pair of eyes through which we see the world, but these stories give us thousands of different perspectives.

The Walt Disney Company has been bringing these tales to life for 96 years with the film-makers molding characters that capture our hearts and make us fall in love. We all have some part of Disney that we hold dear, be it movie nights, playing dress-up or the churros at Disneyland Park.

But now, many argue that rather than nurturing that affection, Disney is taking advantage of it, as the corporation rolls out one remake after another and advertises a new streaming service.

Disney started as a company founded by brothers Walter “Walt” Disney and Roy Disney in a quest to create something new. The company’s creativity gifted us the classics we’ve come to love: movies where princesses meet dwarfs, mermaids meet sea witches and beasts meet talking spoons.

Understandably, Disney’s goal as a company is to make a profit, but their original priority was innovation. In fact, Disney initially struggled with financial issues as Walt Disney pushed to continually improve the quality of the films.

The company has since grown into the Disney of today: a corporation that holds an influential position as the owner of many of the major film companies that dominate our screens such as Pixar, Marvel Comics and Lucasfilm. Because of this, Disney movies have a profound impact on our culture, and changes in the company engender changes in our society.

Disney has the power to share new perspectives and challenge stereotypes, as was done with gender roles in “Mulan” and “Frozen” by making the main characters, Mulan and Anna, the true heroines of their respective stories instead of the classic damsel in distress. Similar to the way they explain the importance of honesty, courage and respect in “Pinnochio,” Disney can, and has, used its films to spread new messages about morals as well.

There is still so much more material Disney could create, but with the recent line of live-action remakes, such as “The Lion King” and “Aladdin”, and with “Mulan” and “The Little Mermaid” in the works, people are divided over whether Disney is breathing new life into old stories or snuffing out the magic of the originals.

“It is disappointing because growing up, every movie I would see would be this new, creative story. I feel like Disney is getting kind of cheap by just remaking their old ideas.”

“Their stories are really interesting and fun and exciting and it [Disney] was a big thing for me as a kid — it was a big part of my childhood,” Hickey said. “And now that they’re doing remakes it’s kind of just disappointing.”

For some, the remakes are simply frustrating as they don’t seem to bring anything new to the table. Yet Disney continues along this path which many attribute to the fact that the remakes are a guaranteed way to rake in money.

“Typically remakes already have a set target audience who will be expected to see the film and bring in ticket sales,” Paly Film Composition teacher Alanna Williamson said. 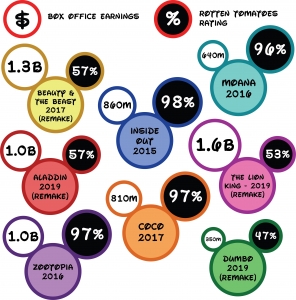 Looking at box office sales, this does seem to be the case. Remakes including “The Lion King,” “Beauty and the Beast” and “Aladdin” each brought in over a billion dollars internationally in box office earnings, with “The Lion King” being the highest at 1.6 billion. Recent originals “Inside Out,” “Coco” and “Moana” brought in 860 million, 810 million and 640 million respectively. But there is more to consider than money. These originals had Rotten Tomatoes ratings in the high 90s while the remakes were in the 50s, showing the more positive response to the originals than to the remakes.

Sophia Cummings, a Paly sophomore, points out that the magic of Disney comes from innovation and, in a remake, this essential aspect is lost.

“It is disappointing because growing up, every movie I would see would be this new, creative story,” Cummings said. “I feel like Disney is getting kind of cheap by just remaking their old ideas.”

However, what some see as a crutch, others view as an opportunity for growth and reconciliation.

Paly junior Andy Wang believes that there are benefits to remaking movies decades later, when initial audiences have grown and cultural settings have shifted.

“The remakes bring back nostalgic feelings of when we watched them when we were young,” Wang said. “And at the same time, they provide viewers with a more modern interpretation.”

Remakes give Disney the opportunity to right past wrongs with plot modifications that cut out the cultural insensitivity and sexism that is evident in some of the company’s original films. Examples include the description of the Middle East as “barbaric” in the original “Aladdin,” and Disney princesses being portrayed as little more than pretty faces awaiting a princely rescue.

“The remakes bring back nostalgic feelings of when we watched them when we were young. And at the same time, they provide viewers with a more modern interpretation.”

Disney is also able to increase the diversity of characters within the new films. For example, Halle Bailey, an African-American singer and actress, has been cast as Ariel in the upcoming live-action remake of “The Little Mermaid,” and in the remake of “Beauty and the Beast,” Disney introduced Lefou, Gaston’s sidekick, as the first openly gay Disney character.

“I think remakes can be an awesome way to retell stories in a way that includes marginalized voices that may have been intentionally or accidentally left out of the original narratives,” Williamson said.

In addition to incorporating underrepresented perspectives and careful editing of original plots to make them more culturally sensitive, the remakes show off the amazing technology Disney has developed in the years since its original classics.

“We now have the capabilities to make previously only imagined situations possible with real actors, so things don’t have to be animated to be fantastical,” Williamson said.

“The Lion King” remake shocked many with its life-like animation. Some like Williamson believe that this realism helps bridge the gap between remakes and the movies on the screen, helping to invite that magic into our own world.

The happiest place on Earth

While there was debate over the remakes, the Disney dilemma extends beyond this single issue.

In his creation of Disneyland, Walt Disney hoped to create a magical place for people of all ages to experience his stories brought into our world. Today, however, that experience comes at a steep price. The cost of admission rose in early 2019, with the price of a one-day adult peak ticket rising from $135 to $149 and with the annual pass, granting access to both Disneyland and Walt Disney World, increasing from $1,579 to $1,949. Prices were raised across the board, illustrating the trend of Disney increasing money making efforts.

Disney will also be opening up yet another source of revenue through a new streaming service, Disney Plus, which will become available in November. The platform will provide access to much of Disney’s domain, including Marvel, Pixar and Star Wars movies, as well as the animated classics.

This isn’t necessarily a bad thing, as the service will come at a relatively cheap price of $6.99 a month. However, it means that access to the companies’ products will be restricted since they will be pulled off of other streaming platforms.

The Disney of our parents’ generation is certainly different from the Disney of today, which calls into question what lies in its future. Perhaps the classics will be all but forgotten, overshadowed by hyper-realistic remakes. Perhaps Disney will take on even more industries, expanding beyond film, beyond amusement parks, beyond streaming, into whatever domain it wishes to conquer. Or perhaps Disney will return to its roots of whimsical storytelling.

It is up for debate whether Disney’s new direction is for the better or worse. However, the power of film is undeniable. In the right hands, movies can be hugely beneficial for those who watch them — and Disney, with an exceptionally impressionable youth audience — is no exception.

“I think one of the main goals of filmmaking is to help people feel less alone,” Williamson said. “Narrative, characters, diegetic worlds, all of these look for ways to help the audience either relate to their own personal experiences or experience something they’ve always wanted to, beyond their everyday lives.”

Avengers Endgame: The Avengers assemble for an epic contribution to the Marvel cinematic universe