Avengers Endgame: The Avengers assemble for an epic contribution to the Marvel cinematic universe

In May 2008, “Iron Man” hit theaters. It was the first of 22 movies in the Marvel Cinematic Universe and kicked off what would become a multibillion-dollar franchise. After 11 years of Hulk smashing, shield bashing and box office cashing, the heroes assembled for the last time in “Avengers: Endgame,” perhaps the most anticipated movie of all time. How the directors, Anthony and Joe Russo, along with the cast members, were able to pull off such a monumental task is a testament to Marvel’s consistency in making great movies.

Every single installment of the MCU’s 22 movies has topped the box office on opening weekend. Some movies like “Infinity War,” which made $257,700,000 domestically on opening weekend, and “Black Panther,” which made $202,000,000, especially stand out. It is even more impressive when one considers how risky these projects are; Marvel is creating movies for an audience that is very protective of their favorite characters. 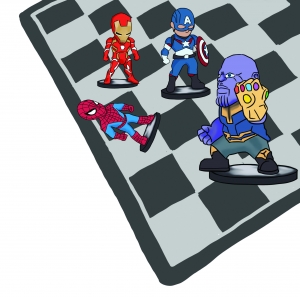 The most recent, and final, addition to the Avengers saga follows the heroes as they face the aftermath of the movie’s prequel, “Avengers: Infinity War.” “Infinity War” ended on a cliffhanger after Thanos, an evil warlord, uses the Infinity Stones to snap half of the universe out of existence. The title, “Endgame,” is a reference to chess. In a chess match, the endgame is the stage where most of the pieces have been taken off of the board. This is why the Russo brothers decided that it was an appropriate name. After the events in “Infinity War,” only a small band of heroes, including the six original Avengers (Captain America, Iron Man, Thor, the Hulk, Black Widow, and Hawkeye), is left to figure out how to bring their hero friends and the rest of the universe back to life.

Based on the general response to “Infinity War,” Marvel knew how excited viewers would be to see “Endgame” and therefore decided to only include scenes from the beginning of the movie and from previous films in their trailer. This move was successful in building suspense because it kept the audience in the dark for the many plot twists to come. At the same time, the trailers for the movie gave viewers just enough of a taste of what was to come to capture their interest.

By the time “Endgame” was released on April 26, the hype surrounding it was at an all-time high. Long-time fans and theorists were predicting what was going to happen, and opening-weekend tickets sold out weeks before the release date.

After viewing it, we agreed that these high expectations were met, and even exceeded, in classic Marvel fashion.

While the characters attempt to traverse a post “Infinity War” landscape, Marvel spends a considerable amount of time advancing story arcs, which is rare for an action movie. The fact that the film took the time to develop the characters makes moments later in the movie much more meaningful. Competing egos, as well as grief from the previous events, create interesting interactions and shifts in dynamics within the original band of Avengers. “Infinity War” is one of the rare action movies that not only provides audiences with over-the-top, epic action scenes, but also with heart-warming and emotional moments.

One of the major triumphs of the film is the stunning visual effects. In some movies, like the “Incredible Hulk,” the special effects were unrealistic, and as a result, it took away from the enjoyability of the film. In “Endgame,” however, the computer generated and live-action elements blend together seamlessly, and the camera angles fully immerse the audience into the extremely well-choreographed action. 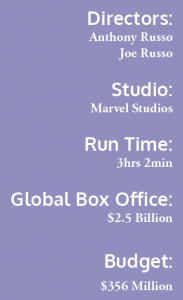 Apart from progressing the story of “Infinity War,” “Endgame” pays homage to events and themes from past movies. The movie includes countless easter eggs and callbacks to previous Marvel installments, which create many special and nostalgic moments for long-time fans. It also included what might be the last Stan Lee cameo. Many scenes and lines only make sense to fans who have watched the previous Marvel movies, so while it is not necessary for people to have seen the installments prior to “Endgame,” it would definitely make the experience more enjoyable.

The movie starts out a lot slower than “Infinity War,” which is appropriate considering the events that transpired in the previous movie. “Endgame” spends a significant amount of time showing the after-effects of the snap on both the heroes and the rest of the world. Doing this makes a lot more sense than if the movie just jumped straight into the action. Fans do not have to worry, however, because the movie is still jam-packed with the intense action Marvel has become known for.

One of the best aspects of the movie is that it leaves the viewer with a sense of closure. Character arcs are completed and loose ends are tied up — the complete opposite of the open-ended conclusion to “Infinity War.” While Marvel’s heroes will most likely continue to make appearances on the big screen, “Endgame” will definitely be regarded as the end of an era. Fans can expect to see many different heroes emerge and take the place of the old ones, symbolizing the new generation picking up where the previous one left off.

The movie runs for three hours, which is long even by Marvel standards. Due to this, we definitely recommend going to the bathroom and getting enough food before the movie, so as to not miss any of the action-packed adventure. Even though it is a long film, once the lights dim and the theme music swells, the three hours will fly by in a snap.