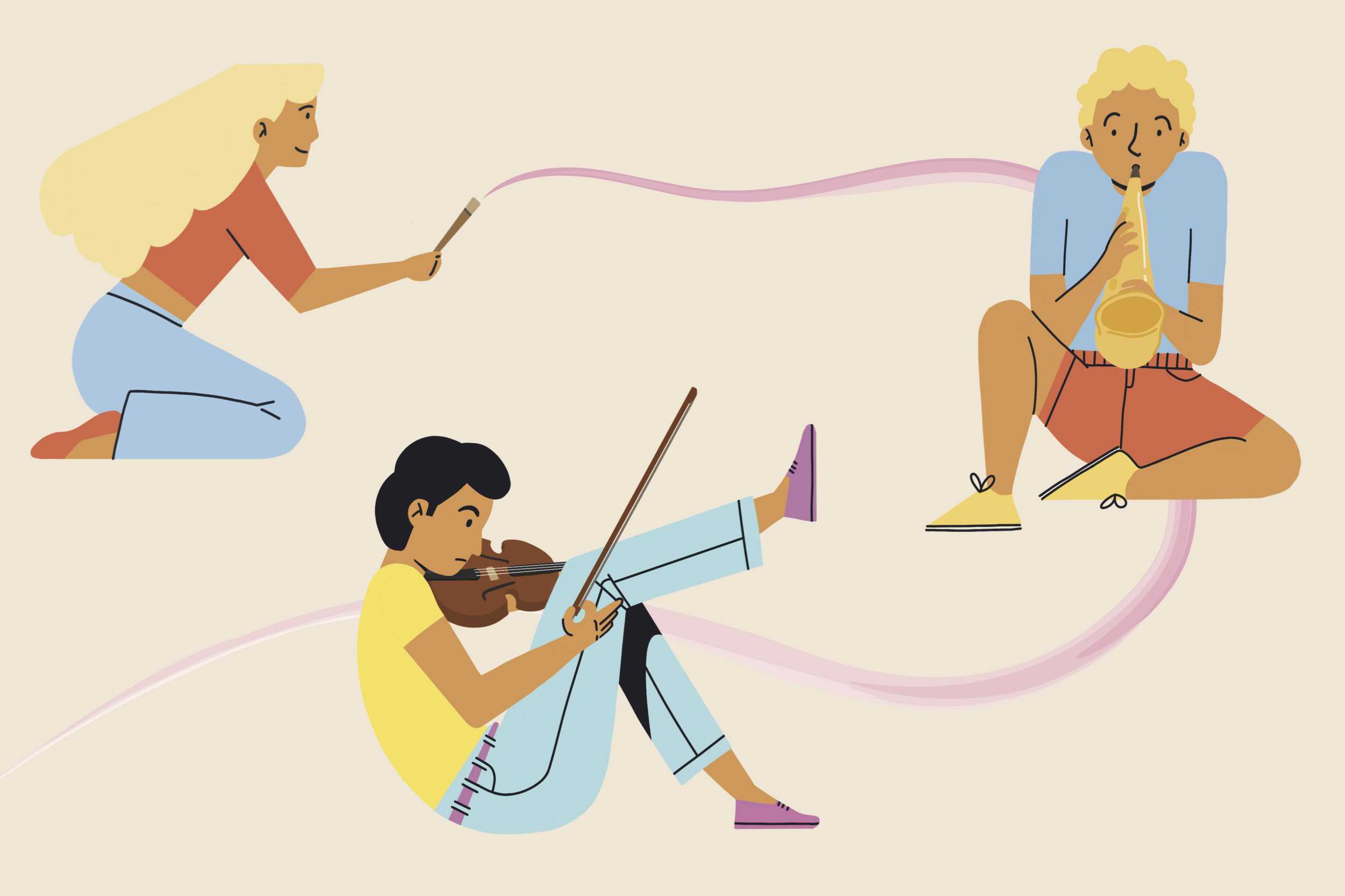 Thirty students’ faces pop up on a black screen, each in their respective rooms with an instrument in hand. After a moment filled with the plucking of strings to find starting notes, and the sound of air conditioners and passing cars, the angelic “Somewhere Over the Rainbow” floats through the speakers. This is Palo Alto High School’s “Spring ‘Virtual’ Concert and Senior Celebration 2020,” and perhaps what most performances will look like in the school year.

Across all departments, COVID-19 and the resulting campus closure have caused extreme shifts in the student experience. However, few classes have been hit as hard as the Visual and Performing Arts programs. Classes like theater, band and sculpture rely on a close sense of community, along with materials and equipment provided by Paly. Despite these difficulties, VAPA teachers and students are determined to make this year valuable.

“We just made a decision this year that [no matter what], no way we were not going to teach,” said Kate McKenzie, the Advanced Painting & Drawing and AP Studio Art 2D Drawing & Design teacher.

The whisk of a brush. A finishing touch. Stepping away from the canvas, the completed masterpiece comes into view. This year, visual art classes mostly operate the same way, only with a more hands-off approach. Students generally check into Zoom for attendance and then sign off to work on their projects, whether it be on kitchen tables, converted desks or outdoor work stations. Compare this with the colorful crowd that once filled the art rooms, and it’s definitely a different atmosphere.

Junior April Wu, who is currently taking AP Studio Art 2D Design, misses the frequent progress check-ins with her teacher but finds that the new format has provided her with other opportunities.

“It’s kind of nice having freedom in a way, because then I can kind of do things my own way and see where I would go without supervision,” Wu said. “It’s more of an exploration kind of thing.”

Subjects such as ceramics, painting and glassblowing heavily rely on physical materials and tools, as well as an appropriate workspace. Yet with supply cabinets locked up and classrooms collecting dust, teachers and students are searching for creative alternatives.

Take, for example, Paly’s celebrated glassblowing program, which has been discontinued while students remain at home. To carry on their craft, according to senior Andrew Guillet, some glassblowers go to Public Glass, a glassblowing studio in San Francisco. However, the commute and restrictive time slots make the process inconvenient and less enjoyable.

“It’s kind of nice having freedom in a way, because then I can kind of do things my own way and see where I would go without supervision. It’s more of an exploration kind of thing.”

Despite these immediate challenges that come with online learning, some unexpected and interesting changes have surfaced. To McKenzie, recent student work has gained a new depth due to newfound struggles and stories.

“The work that I saw coming in was so emotional and so strong,” McKenzie said. “That does come out in really powerful ways in art that I don’t get in the classroom.”

Straying from the stage

A final sob. Thunderous applause. With a bow, the curtains close on another successful show. Students, staff and families have long enjoyed numerous onstage performances, ranging from the serious “Tartuffe” to the silly “The 25th Annual Putnam County Spelling Bee.” Due to distance learning, however, Paly’s plays and theater classes have changed dramatically.

Theater students are currently focusing on voice work, which includes creating character voices, dialects and accents — skills that can be  easily developed over Zoom. It’s also less challenging to learn about history and playwriting when computers — which usually aren’t available in theater rooms — are guaranteed in front of every student, according to Sarah Thermond, the Theater and Stage Technologies and Design teacher.

However, as senior Kristen Liu puts it, theater is an art that relies on physical interaction, so the in-person experience is almost impossible to emulate.

“It’s so weird because we’re not standing up and seeing each other, we’re just sitting and reading the script,” Liu said. “You just don’t get the full effect.”

Although this aspect of theater is diminished, Thermond is working to maintain the sense of community that guides the performing arts.

“I like doing a lot of warm up activities and improv exercises because those tend to generate laughter,” Thermond said. “I think once you’ve been in a class where you’ve laughed with your peers and they’ve laughed with you, you tend to feel closer to them.”

Always vital to the theater process, Stage Technologies and Design students coordinate key elements such as lighting, sound, backdrops and props to create settings for each show. Now, rather than managing this separately, the students will work with actors to transform their homes — a task that has new opportunities with Zoom.

“In a way I get to experience more jobs, I get to see more things because it’s very easy to tune in to something now,” junior Olivia Gee said. “You don’t have to be there physically, so if you want to be at a rehearsal you can just pop in.”

No matter the direction they take, theater is bound to be new and exciting with the upcoming “Mystery, Murder, & Monsters” show, which includes three performances from Nov. 6–13.

Bows fly off strings. The audience holds its breath. As the conductor signals the last note, resolving harmonies ring through the hall. Like theater, the band, orchestra and choir programs cannot have their regular stage performances. Unfortunately, Zoom performances aren’t a viable option for them either due to audio lag, as musicians cannot play in time with each other. Music ensembles and technology usually don’t mesh well, according to senior and orchestra student Noah Holbrook. 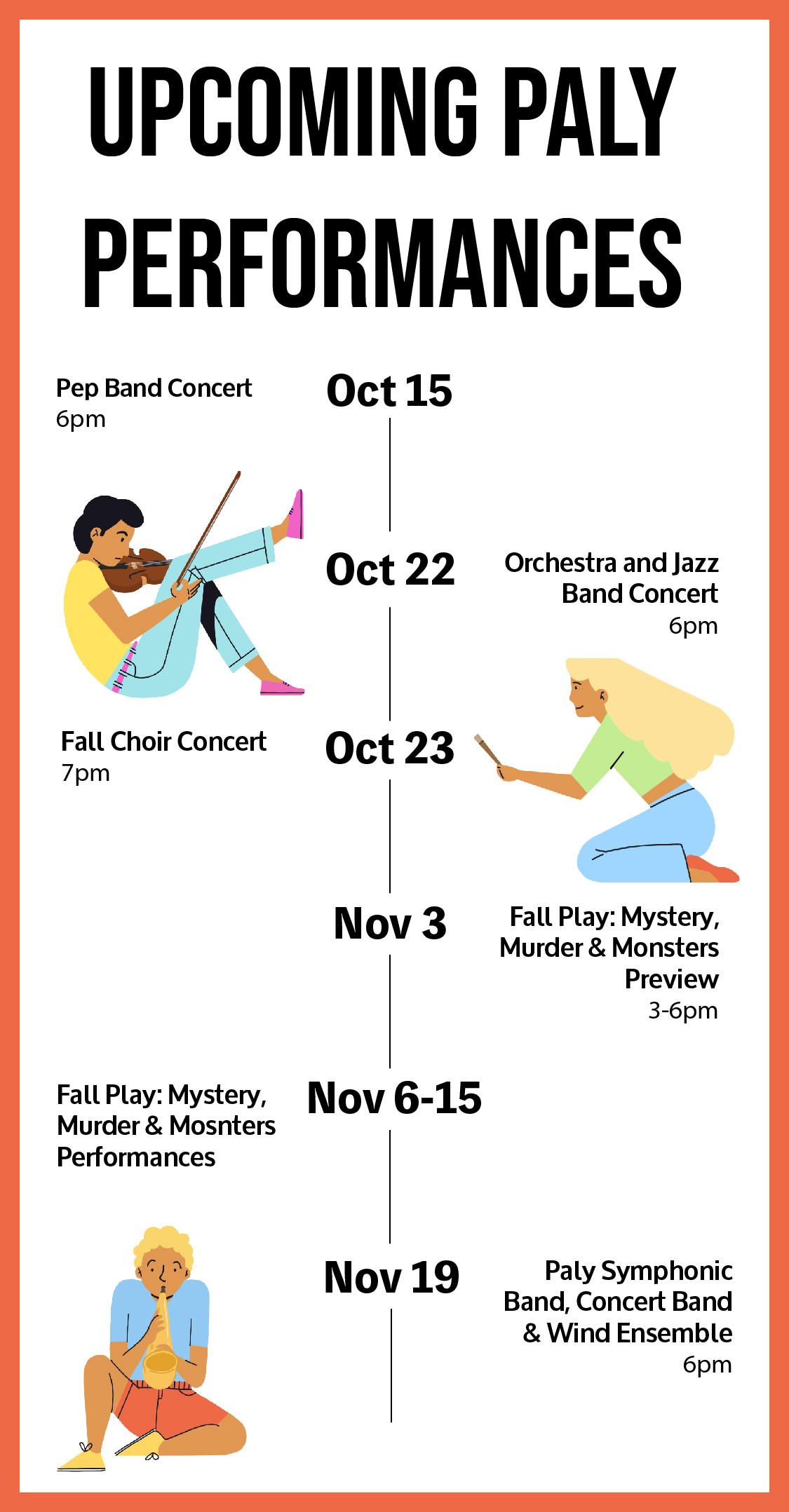 “You have like 50 students and they all have to get on to these new platforms,” Holbrook said. “Invariably you know, through no fault of their own, someone’s tech won’t cooperate.”

When the only functional way to make music is with click-tracks — audio used to synchronize players — and piecing together individual recordings, students miss out on the feeling of playing together in an ensemble.

“It’s one thing to hear a bunch of recordings all put together, and it’s another thing to hear it as you’re doing it and to be able to adjust and feel the music,” senior and choir student Ben Norton said. “I think it really does make a difference in the musical decisions you make and the final product.”

Across the district, teachers are finding ways to encourage more involvement; students are learning to use apps to create their own music videos, and in choir, students have the options to learn about vocal health and the history of vocal music.

Jeffrey Willner, the Instrumental Music teacher, has explored technology more due to the shift to online learning. In particular, he plans on using Smart Music — software that aids in creating and evaluating students’ recordings — even when classes transition back to in-person.

“I’m a boomer, big time, you know,” Willner said. “And so it’s forced a lot of us older people way into using this tech more than we did [before].”

As music students learn to apply technology, visual arts classes look for workspaces and materials while theater prepares to perform online. The arts may be drastically different and may not live up to the classes they were before, but for now, students and teachers  will have to get creative in finding ways to create.