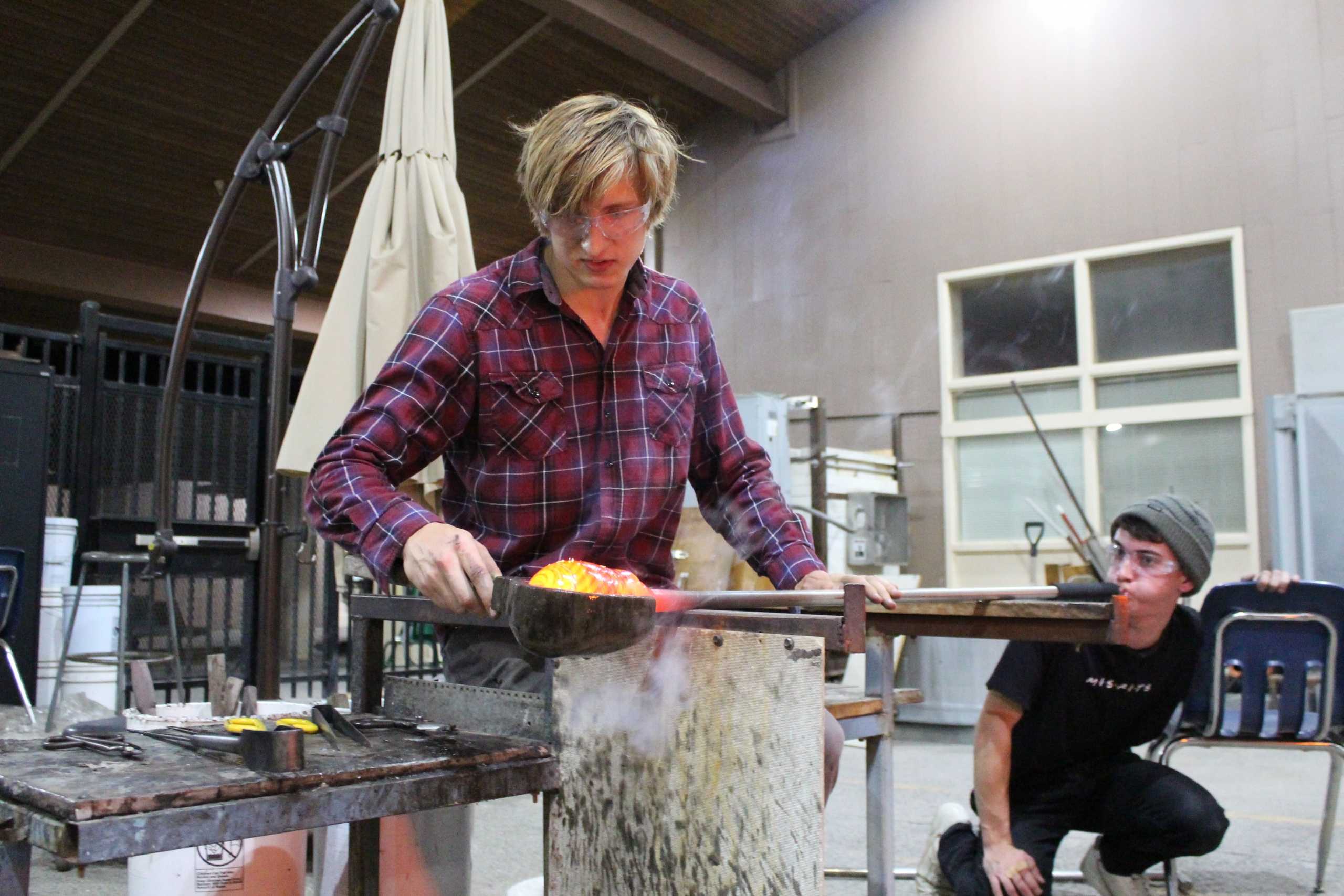 LASER FOCUS Glassblowing instructor Martin Ehrensvard helps a student shape their most recent project. “I hope I can be the teacher that cared about me when I was here,” Ehrensvard says. Photos by Zoë Wong-VanHaren

Palo Alto High School junior Andrew Guillet sculpts his glass vision by deftly rolling the molten substance at the end of a metal, rod-like blowpipe against a metal table by alternating hands on the blowpipe at a steady pace: a method known as marvering. He diligently keeps the glass in constant movement in pursuit of a perfectly symmetrical shape, at times inserting the glass into the forge’s glory hole to reheat it. To many, the intense heat is overwhelming, but Guillet is energized by the flames which create his spectacular pieces.

Outside room 105, he is surrounded by other Palo Alto High School students and staff making their own pieces. Periodically, his Advanced Ceramics and Sculpture classmates will help him with his piece, torching sections of it to keep them warm or adding pieces of glass. By the end of the period, a two-foot-deep black vase — the result of an hour of focused marvering, heating and torching — emerges from a burning furnace.

Behind it all is Martin Ehrensvard, Paly’s resident glass master, who runs the glass studio. Ehrensvard acts as a mentor to students like Guillet, and is a constant presence in the studio. From guiding beginner glassblowers to providing technical pointers to more advanced students, Ehrensvard dedicates his hours to mentoring and assisting them. His mentorship instills inspiration in his most passionate glassblowers, who may go to purse the craft later in life.

Guillet is one of a handful of students who was inspired by Ehrensvard and jumped at the chance to partake in Paly’s coveted glassblowing program. Paly is one of only five high schools in the United States to have glassblowing equipment and a developed program. Steve Ferrera, the current ceramics and sculpture teacher, credits former art teacher David Camner for introducing glassblowing to Paly twenty years ago, which was also made possible by support from the community. The department has since grown into a community of over 100 students per year.

Camner’s influence has not left Paly completely. His passion has been carried through the years by Ferrera and Ehrensvard.

“A big part of it was because David Camner was super passionate about it [glassblowing],” Ferrera says. “So he made it happen through just hard work and sheer will and perseverance.” 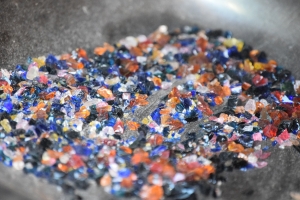 CREATIVE COLORS Students use a variety of colored glass pieces to create their different sculptures, from glass pumpkins to goblet-shaped cups. “The creative aspect allows me to be myself and control what I make,” junior Jack Compton says.

Ferrera currently teaches Ceramics and Sculpture and Advanced Sculpture at Paly, and his influence extendsmuch farther than the classroom. In his own time, Ferrera enjoys working on his own personal pieces which he displays to his 40,000 followers on Instagram and sells on his eponymous online store.

Though he currently focuses on silicone and resin art pieces, Ferrera shares a love for glassblowing as he works alongside many of his students.

“It’s very relaxing while you’re heating something up,” Ferrera says. “It’s also really cool to see the students work and make pieces. You have to invest a lot into glass pieces, both physically and emotionally.”

With 30 students in each of his art classes, it is almost impossible for Ferrera to work with all of them at once, in both the classroom and outside with the glassblowing equipment. This is Martin Ehrensvard’s territory as manager and overseer of the glass studio.

“You have to invest a lot into glass pieces, both physically and emotionally.”

Ehrensvard, who graduated from Paly in 2014, discovered the school’s glassblowing program during his sophomore year and dedicated his time to perfecting his glass-working techniques, staying late on school nights and coming in on weekends to work. After graduating, he spent the next few years traveling around Europe and apprenticing in some of the world’s most successful glassblowing studios, including Mohl & Drivsholm Glass in Denmark and Berengo Studio in Italy. 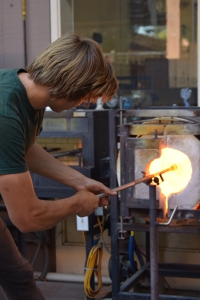 FORGED IN FIRE Martin Ehrensvard heats glass in the furnace. He teaches students the necessary skills for glassblowing, while also creating and selling his own pieces. “Glass is a very hands-on thing,” Ehrensvard said.

“I saw the whole process from start to finish, including how they built the boxes … [and] how they ship them away,” Ehrensvard says. “As long as you’re in the presence of someone who is successful and you pay attention, you can learn a lot.”

After working for professional glassblowers, Ehrensvard gained knowledge of both new techniques and the business of art shows. As he continued to dedicate himself to his internship, he began to take on bigger responsibilities, handling top-of-the-line pieces worth tens of thousands of dollars.

“That’s what I craved the most right out of high school, because people have told you what to do for so long, but they didn’t trust you with something really important like that,” Ehrensvard says. “So I would try hard to get those missions.”

Ehrensvard helps Ferrera’s students  bring their own glass pieces to life, teaches them valuable techniques and uses Paly’s equipment to create his own work for his online store.

In 2018, his pieces garnered the attention of a Canadian glassblowing competition featured on Netflix’s “Blown Away,” who encouraged Ehrensvard to apply. Though appreciative and excited upon receiving the invite, he ultimately declined.

“[If I got in], I would be competing against people that have been glass blowing for over 30 years,” Ehrensvard says. “They were also filming the show between September and November, and that’s when Paly would need me the most.”

From teacher to student

Glassblowing techniques don’t just require time and energy to perfect. They also need a guiding hand from someone who is able to pass down knowledge and technical skills. As Ehrensvard helps students with their glass pieces, he introduces them to the techniques and skills that he has learned through his experiences. 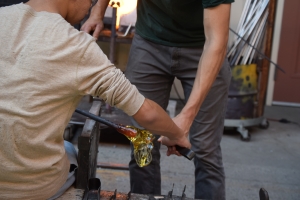 TEAMWORK MAKES THE DREAM WORK Martin Ehrensvard helps a glassblowing student smooth out the rough edges of his piece. “You have to trust your team to get a good end result,” junior and Advanced Ceramics student Andrew Guillet says.

“He’s a great influence because he’s a great glassblower, but he’s also encouraging and tries to help everyone to get as good as they can at glass,” junior Eli Crystal says.

Glassblowing students look up to Ehrensvard not only because of his talent with glass, but also his motivational attitude that allows students to persevere through the challenges of working with hot glass.

“He pushes me to do more difficult techniques and perfect the things that I do,” junior Jack Compton says.

Whereas some may be conservative with what they know, Ehrensvard values the discussions he has with his students who share the same passion as he does.

“It’s a fun thing when you’re talking about something passionately with someone else, and you’re smiling and they’re smiling,” Ehrensvard says. “It’s a positive cycle.”

“It’s a fun thing when you’re talking about something passionately with someone else, and you’re smiling and they’re smiling.”

Ehrensvard believes the universality of glassblowing and art attracts many of the most dedicated artists.

“Art makes people smile, and we fulfill an important role in society because we make people’s everyday lives more colorful,” Ehrensvard says. “[I tell] my students to figure out what matters to them and how to communicate it, and find people who can teach them to do that.”

Drawing a fine line: Young artists battle with the concept of censorship for the first time