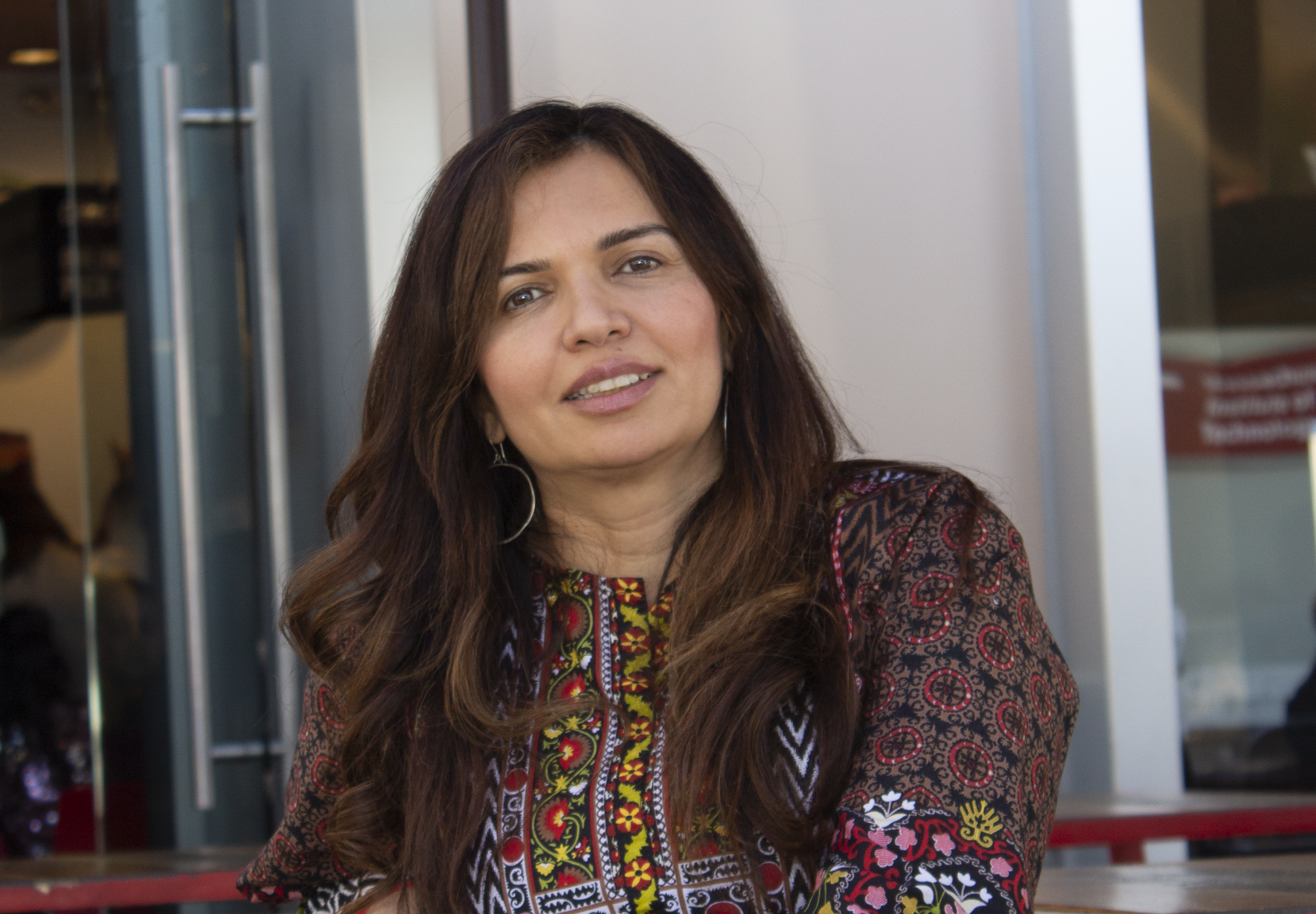 COOKING WITH KHAN Zareen Khan, owner of Zareen’s, sits in front of her Pakistani-Indian restaurant at its California Avenue location. “This job is so rewarding because people come up to you and they’re so happy and they love the food,” Khan says. Photo by Zoë Wong-VanHaren

“I was sitting here

working, and I saw an older Indian-Pakistani lady with no English and her daughter-in-law, they were eating some really authentic gola kabab and sheermal,” Zareen Khan, owner of Zareen’s, fondly recalls. “And I saw this Caucasian Stanford [University] professor sitting eating chicken tikka masala. Then I saw that they started sharing food across the table and they were talking, even though they didn’t understand each other’s language. It was so cool, right? Like this 75-year-old grandma trying to explain to her how she could try the gola kabab and the sheermal. And then she’s trying it, and enjoying it, and they’re like talking in sign language or a little bit of broken English.”

Khan owns the Pakistani-Indian restaurant Zareen’s, located in Mountain View and Palo Alto. Zareen’s is one of Palo Alto’s hottest eateries, with its line permanently extended past the outdoor seating. Zareen’s has been recognized as a Michelin Guide Restaurant in 2017, 2018 and 2019 for its “well-spiced” samosas and “juicy and caramelized” chicken shami kababs.

Behind the awards Zareen’s has accumulated is Khan: a genuine restaurant owner who, through her food and passion, has managed to bring many groups of people together. This includes the community of customers that visit the restaurant, the tight-knit community among her own staff and the broader international community where her food connects people with Pakistani-Indian culture.

Khan grew up in Pakistan, where she studied business before moving to America. However, she said she had been pigeonholed into the business career path and found no satisfaction from it, so she decided to start from scratch.

Khan began by picking up odd jobs that interested her, such as teaching cooking classes and catering for restaurants.

“There have been times when I felt like, ‘What the hell am I doing making $5 an hour from cooking classes?’” Khan said. “But then I figured that this is what I want to do and I’ll continue to do it.”

In 2014, Khan was able to open her own restaurant. At Zareen’s, Khan shares the same joy of authentic Pakistani-Indian cuisine that she cooked in those past classes, only now to a larger audience.

“I think what makes this place unique is that you won’t see just one kind of people here,” Khan said. “That kind of gives it that melting pot feel.”

This welcoming attitude percolates beyond the restaurant’s atmosphere. To Khan, not only is the well-being of her employees a priority, but their happiness and satisfaction as well: “Happy workers make good, happy food” is a mantra she often tells herself.

In 2017, Khan purchased a Menlo Park house which she uses to provide discounted housing for many members of her staff — an arrangement that shows her commitment to her staff and the food that leaves her kitchen.

“I figured that I can help them by giving subsidized rent, and they can help me by being consistent and showing up to work and not being late,” Khan said. “It’s a nice place they share together so they become like family.”

“She’s a person with a lot of vision, a vision different than anybody else’s.”

With her unique management style and wide range of strong beliefs and experiences, Khan has certainly left a lasting impression upon her staff.

“She’s a person with a lot of vision, a vision different than anybody else’s,” Zareen’s employee Maria Mendez said. “I notice that the way she gets involved in her business is totally different to any other business person I’ve dealt with before.”

Perhaps one of Khan’s most defining characteristics is her drive to give back to the community and to support what she believes to be right. For example, each year on Mother’s Day, Khan works hard to recognize every woman in the community.

“I personally make some small dessert to give to all the women who come here,” Khan said. “They like it, you know, they appreciate being appreciated.”

Along the walls of the Palo Alto Zareen’s are messages of female empowerment expressed through art such as poetry, comics, quotes and, on one wall, a vibrant mural. The mural depicts a woman, Qandeel Baloch, who was a victim of honor killing — a murder that occurs when a male family member kills a female family member who they believe has tarnished their family’s reputation. “It really affected me because on her death anniversary they made this mural in Karachi, Pakistan and the next day the religious police came and whitewashed it,” Khan said. “So when I found out about it, I go, ‘Ok, she’s gonna live on my wall.’”

From her genuine relationships with her employees to her activism regarding women’s rights, Khan brings together several communities through an influential Pakistani-Indian restaurant: Zareen’s.