What Happens When We Accept Torture: Why the Stanford Prison Experiment Still Matters 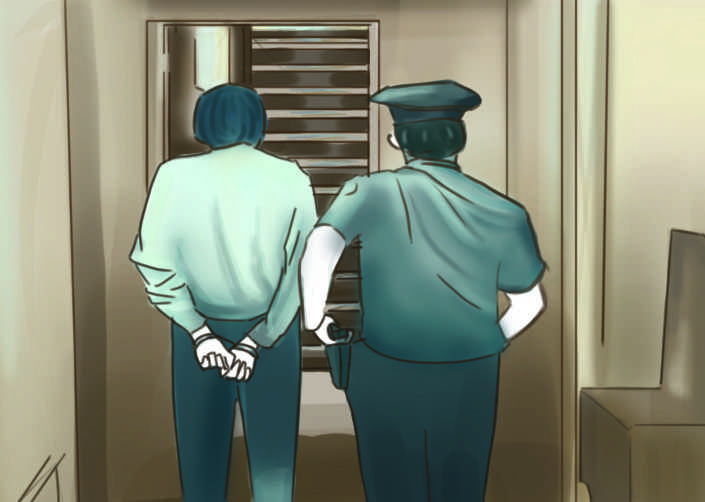 FORMALLY CHARGED Participants who were assigned the role of prisoner were arrested without warning early on a Sunday morning, being formally booked in the local police station before being left blindfolded in a holding cell. Art by Annie Zhou.

Thin beige walls stand mere feet from each other, forming the narrowest of corridors, and from the basement of Stanford University’s Psychology Department, no evidence exists that the warm summer sun is still shining brightly outside. A deafening silence resonates within the eerily lit passage as stale air cycles throughout
the hall, and the extraordinarily low ceiling challenges visitors to overcome the claustrophobia that overwhelms them the second they step foot on the linoleum floor.

This section of the department was the location of the study now known as the “Stanford Prison Experiment,” just a few miles from the equally infamous “Third Wave” experiment at Cubberley High School.

The study was led by Philip Zimbardo in 1971 with the goal of gaining a better understanding of human nature. The results were astounding: both the college students who were assigned positions as guards and those who were assigned positions as prisoners completely assumed their roles after minimal prompting, prisoners adopting a sense of vulnerability and guards becoming hostile and cruel without hesitation.

To many at the time, the experiment was simply a chilling story. However, now — 45 years later — the study is still relevant in relation to issues in the upcoming presidential election, especially the question of whether people can be swayed into committing acts of torture.

Both sides of the political spectrum

Both candidates in the 2016 presidential election have expressed strong opinions about the implementation of torture. The Republican presidential candidate, Donald Trump, is a staunch advocate of this form of physical punishment.

The Trump campaign failed to respond to a request for further comment on this stance.

Conversely, Democratic presidential candidate Hillary Clinton has long opposed the use of physical abuse as punishment.

“Another thing we know that does not work, based on lots of empirical evidence, is torture,” Clinton said during a speech at Stanford in March.

Amy Rao, a member of Clinton’s National Finance Team and a former Palo Alto High School parent, expands on this, saying “Clinton is totally against torture. There’s no gray area. Once we torture someone, we can’t even use that information in court.”

With Trump adamantly supporting the use of torture, the issues brought up by the Stanford Prison Experiment have become pertinent once again. Given that abuse in prisons is already an issue, Zimbardo’s findings suggest that should the maltreatment of perpetrators be promoted by an authority figure, the results could be drastic.

Psychology of the experiment

TOTAL CONTROL As the experiment progressed, even the most basic of needs, such as going to the bathroom, became privileges which could be revoked at any time. Art by Annie Zhou.

In the Stanford study, there was no clear distinction between the participants until the roles of prisoners and guards were arbitrarily assigned. Yet as the days stretched on, the students fell deep into their characters, and guards humiliated and dehumanized prisoners with every interaction.

According to the facilitators of the experiment, their goal was to convey the experience of someone living in an oppressive environment rather than to precisely simulate a real prison.

As stated by Melinda Mattes, one of Paly’s Advanced Placement Psychology teachers and a former student of Zimbardo’s, the reason the Stanford experiment is so demonstrative of human nature and the way it manifests itself in prisons is because of its careful construction. However, she admits that there were some flaws in the experiment.

“One of the errors he [Zimbardo] made in the study was that he was too involved in it,” Mattes says. “He was the first to admit that it probably wasn’t ethical. They had to release a guy [early] because he had a mental breakdown.”

Zimbardo’s then-girlfriend — now his wife — Christina Maslach, Berkeley professor of psychology, was the first to question the ethics of the experiment.

“I just was getting kind of sick to my stomach,” Maslach says. “This is just awful the way they’re treating each other. All of the people who were around, they weren’t bothered at all. I was the only one. They were teasing me almost; it was like, ‘What’s the matter, can’t you take it?’”

According to Mattes, it is probable that the others did not think to question the ethics of the simulation because they were all — Zimbardo included — too closely involved. She says that it often takes an outsider to objectively evaluate a psychological experiment.

For more information on the Stanford Prison Experiment itself, please follow the following link: http://wp.me/p2Mca9-2YH

Stanford law professor Larry Marshall claims that the experiment was an accurate representation of the way the prison system functions in the United States.

“[It] was only a few days but still it showed the perverseness of the system,” Marshall says.

More than anything, it was the brutality of the guards that he found to be resemblant of the actual system. Although instructed not to harm the prisoners, the guards’ superiority consumed them. They resorted to battering and tormenting the other participants in the experiment. Similar abuse is a reality for many real prisoners.

“That is one of the horrors of the prison system; the degradation and the dehumanization in a system that isn’t too careful,” Marshall says. “There’s a real swath of guards who are absolutely just power hungry, abusive even, to the visitors and lawyers … [These guards] know nobody’s watching, and nobody gives a damn.”

Marshall does not claim that all, or even most, prison guards are like this; however, he says that if nine out of 10 guards are perfect, just one is enough to make the climate awful for inmates.

According to Mattes, immoral actions such as the abuse of prisoners by guards are not necessarily caused by the innate badness of the perpetrator.

“It’s not that we are inherently evil or inherently good; it’s that a situation can influence our behavior pretty dramatically,” Mattes says.

This idea, that humans are so radically influenced by situations, has worrying implications when a topic such as torture comes up. According to Zimbardo’s research, when a situation changes, many individuals adapt to fit that situation. Should something as ethically problematic as torture become less stigmatized, many individuals, even if previously against torture, could be swayed into accepting the practice. Prior to the prison experiment, many of the participants, both guards and prisoners, described themselves as pacifists, and very few — if any — were outwardly aggressive. However, they still acted so violently that the experiment had to end prematurely.

The question of whether people would follow illegal torture orders has been asked  many times during the course of the election process, and unfortunately the results of the Prison Experiment point toward yes.

“I was just following orders” has been a common excuse in the past, most famously used by Nazis after their defeat in World War II. Nazi lieutenant colonel Adolf Eichmann wrote in 1962 that he and many others had been “forced to serve as mere instruments.” He claimed that the soldiers did not hold moral responsibility because they merely did what they were told to do; the fault lay, rather, with the leaders who originally issued the orders. In a situation where a figure of immense authority issues an order to use torture — even though it is illegal — the intensity of the situation could very well overwhelm a person’s values, swaying even the most moral of people to commit drastic acts.

Both Mattes and Maslach make claims that everyone is heavily affected by the situation in which they live, and when society changes its standards about a contentious issue — in this case, torture — events similar to those which transpired during the prison experiment have the potential to repeat. The key difference between the situation in the experiment and the changing stance on torture is that one was a simulation, taking place in a controlled setting with just a few select participants, whereas the other has real, tangible implications, and exists on a national scale.

“The message is that, whoever we think we are, whatever we think we’d do … the power of the situation to affect our behavior … is something we all need to really think about,” Maslach says.