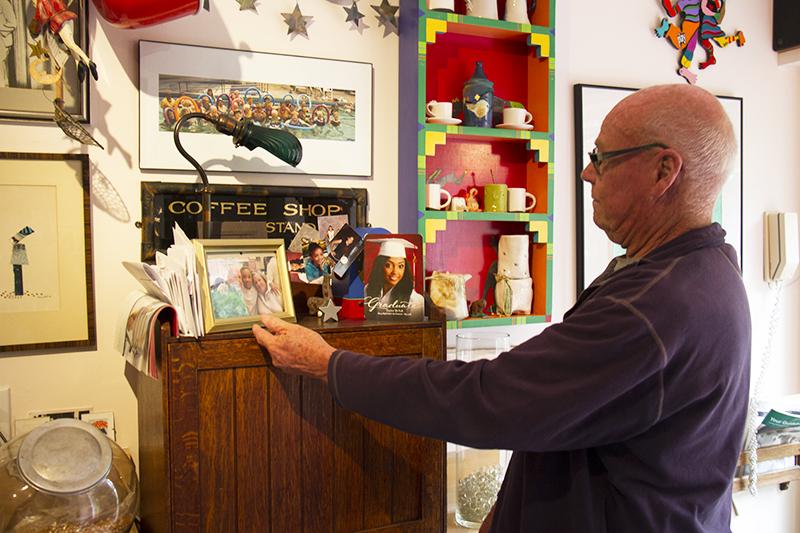 The Third Wave: Timeline of events

Following the inability of his sophomore contemporary history class to understand how Hitler rose to power, Cubberley High School teacher Ron Jones began his social experiment “The Third Wave,” in order to demonstrate Hitler’s rise to power in WWII. Just before school started on Monday, he cleaned the classroom, straightened the desks, and wrote the slogan “STRENGTH THROUGH DISCIPLINE. STRENGTH THROUGH COMMUNITY. STRENGTH THROUGH ACTION.”

When his students arrived at the bell, Jones introduced a new set of rules. Students had to be seated at attention—feet flat on the floor, backs straight, hands flat on the desk—at all times. When the students needed to answer a question, they were required to stand up, address the teacher, and speak in three words or less. The students had to be in their seats before the second bell rang. Jones drilled his students to enhance efficiency in the class, including having the students practice getting in their seats before the bell rang. He concluded the day by having his students chant the slogan.

Because Jones meant to have the experiment only last one day, he was very surprised when he came to class and found all his students seated at attention with curious expressions on their faces. Intrigued, he continued the experiment, naming it “The Third Wave” after the surfer folklore that the third wave is always the strongest one.

Jones introduced a class salute—arms raised and bent at the elbow, hand forming a C—and mandated that all members of the Third Wave must salute to one another in and outside of class.

“I loved that because I’m kind of a mischievous kid,” Hancock says. “And I wanted to have fun and mess around. And so I was attracted to that. Maybe I could figure out something that we can do and have some fun and mess with it before it’s over.”

Jones conscripted the service of the members of a car club, many of whom were also in Jones’ senior civics class, to help him enforce rules and act as his bodyguards. Since he believed that someone was always out to physically hurt him and take his power, Jones needed other people to protect him from danger.

“These guys were not all nice guys,” Hancock says. “They would beat you up in real life. Back then when the hippies were just starting, these guys would beat up hippies… They called themselves the Executors. They really enjoyed being the toughs in school, and they had their jackets and the whole bit.”

That day, Jones assigned each student a membership card and told the class that three of the cards had randomly been marked with “X”s. Those with Xs belonged to a secret police force, which was to report any suspicious behavior and any anti-Wave sentiment to Jones.

Members of the Wave were also assigned specific jobs. One job was to memorize the names and addresses of everyone in the class.

Eerily enough, the Third Wave began to evolve beyond Jones’ classroom and take a life of its own. Participation increased from other classes and grade levels due to the recruitment efforts of his students. By the end of the day, his students had brought in about 200 participants from all over the school to be ‘sworn in’ and admitted to his class.

On Thursday, Jones received reports from half his students turning in others for improper salutes or alleged plots. He had created an atmosphere of distrust; students could not speak freely, not even with their closest friends, because they would not know what impact their words may have on their future in the experiment. In the morning, Jones held a hearing to try all those convicted of anti-Wave activities. He would read off a name, explain what crime was committed, and let the class decide whether to banish or keep the member. More often than not, the class would chant that the person was guilty and should be banished.

Hancock himself had been tried for crimes against Jones. To this day, he still does not know who turned him in. However, fortunately for him, his friends stood up for him, which prevented him from being banished.

“I was tried once for hanging out with nefarious characters,” Hancock says. “In this case, some of my friends said, “He’s okay,” and I got to sit back down. Some of the kids who did not speak up on their behalf, who didn’t have the courage to help them, they were tried, convicted and sent out.”

Later, Jones admitted that the names were randomly and spontaneously picked while he stood in front of the classroom talking, and were specifically people who had been turned in by others.

However, the experiment was slipping out of Jones’ control. He then announced that the Wave was part of a nationwide new political party springing up in thousands of high schools across America, and the presidential candidate would be revealed the following day at a noon rally. The Vietnam War had been raging on, and the nation was bitterly divided between Democrats and Republicans. Students felt the need for change, and quickly found the new “party” as a savior to the issues in America, and rallied all for it.

“He had a curtain closed up by the windows and he dims the lights and he says, ‘I got news for you,’” Hancock says. “This isn’t a game. This is real. There’s a 1025 other classrooms in the united states doing the same thing that we are. And the Third Wave is the beginning of a new political party in the United States. We know the Republicans and the Democrats can’t run things and they’re killing our brothers and sisters in Vietnam, and we’re going to run the country better than them, and we’re starting a whole new party. You are the vanguard of this new political party. And in a few days, the new national leader of the political party will leave the political party that he is in now, and announce to the country this new third political party… The trials was to get the kids out that aren’t serious. You guys are the special ones.’”

Jones held a noon rally in the auditorium. He arranged for his bodyguards to escort those possibly targeted by members of the wave and planted fake reporters at the scene. Despite the heat and stuffiness of the room, the students sat at attention in chairs, all facing a blank television screen. For a while, there was nothing displayed. Students began to feel restless, and after another stretch of time, a few began to leave.

Finally, a film began to play on the screen about Nazi Germany, ending with a picture of Adolf Hitler. On that note, Jones stepped out from behind the curtain and told everyone that the entire week was staged. The Third Wave was not in fact a political movement, and was rather a social experiment. He further explained how easy it is to manipulate groups of people into bowing to the will of a central authoritarian figure, and connected it to Hitler’s rise to power.

Upon hearing this, students slowly began to realize the weight of Jones’ words. Some began to cry, others got up and exited the room, but the majority were dumbfounded.

“We weren’t really rebellious kids turning on the establishment quite yet,” Hancock says, “But the Vietnam War was beginning to get our attention, and other activities around the community were. So that’s part of why it succeeded: we were still obedient, and he took advantage of that.”