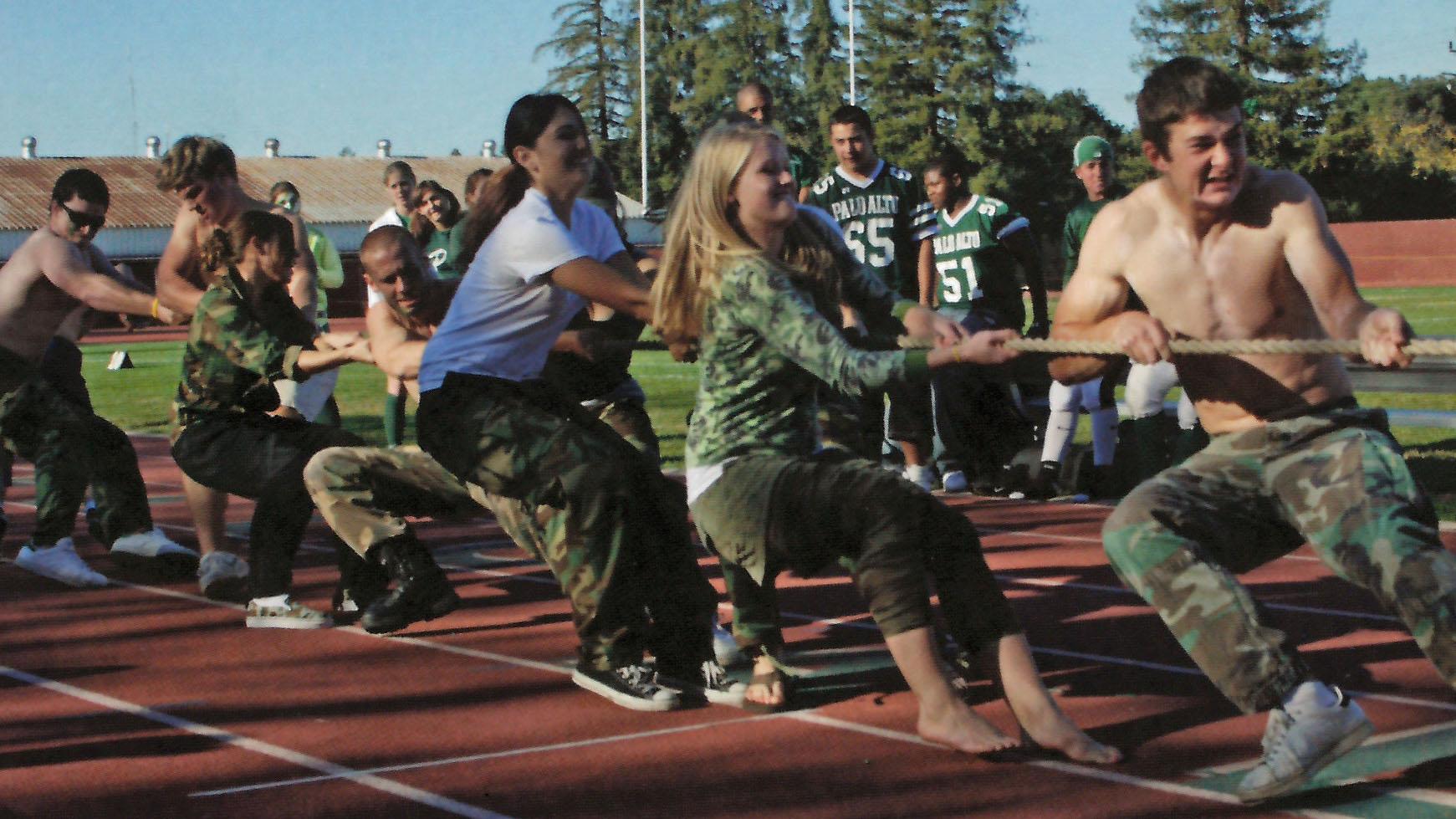 The trouble with traditions: Exploring Paly’s controversial past with school spirit

After 12 years of school, senior year marks the end of students’ first chapter in life. At Palo Alto High School, this means a year filled with classic traditions: camouflaged clothing, Spirit Week victories, future planning and heartfelt goodbyes. With Paly’s history spanning just over a hundred years, countless traditions have come and gone while others are still celebrated today. These traditions, however, have not existed without controversy and debate, and many argue they should be scrapped entirely.

On the first day of school, the senior tradition of wearing camouflage-patterned clothing makes its annual debut. In a sea of freshmen, sophomores and juniors, seniors emerge dressed in identical camouflage pants, a symbol of their final year of high school.

According to math teacher and Paly alumnus Arne Lim, camouflage was a Spirit Week theme one year for the senior class. Since then, seniors have continued wearing camouflage, expanding the tradition out of Spirit Week and into other significant dates in the school year, such as the first and last day of school, as well as some football games.

This tradition, however, has become a recent topic of debate due to the pattern’s original function as war attire. Senior Class President Frida Rivera says she felt conflicted over participating in the long-standing tradition, but ultimately decided to wear camouflage on the first day of school.

“I’m not a particular fan of it [camouflage] because I think it’s representative of war and guns,” Rivera says. “But I felt like I wasn’t in a position where I should be preventing other people from continuing this tradition, especially since I’m the Senior Class President.”

Rivera says it is up to each individual to decide whether they want to wear camouflage, and she respects individuals who choose not to follow that tradition.

“I’m not a particular fan of it [camouflage] because I think it’s representative of war and guns.”

The final day of Spirit Week, where students are encouraged to dress in green in white to show school spirit, has created mixed opinions with many seniors opting to wear camouflage instead.

Another longtime Paly senior tradition is Egg Wars, a night where seniors and juniors face off by throwing raw eggs at each other. Egg Wars takes place off-campus, at a location chosen by members of the senior class. It is not an activity endorsed by the Paly administration or the Associated Student Body, but students participate regardless. No real winner is announced, since the night often ends with the police showing up to threaten arrest. Despite this, many students believe Egg Wars is a rite of passage for upperclassmen — a kind of class-bonding activity.

One such person is Paly alumna Jane, whose name has been changed due to her participation in illegal activity. Jane attended Egg Wars in both her junior and senior year at Paly.

“It was fun because it had a sense of camaraderie,” Jane says. “But it was never really worth it.”

Though Jane felt a sense of community, she ultimately decided that the event was a waste of her time. One issue Jane had was people failing to respect the implicit rules. For example, students brought items such as firecrackers to throw alongside the eggs or freezing eggs.

Despite Egg Wars being considered as a classic senior tradition, it is not a harmless one. Besides the potential injury for students participating in the event, those living in the area near Egg Wars also face property damage. Residents wake up to cracked egg shells and yolks splattered on sidewalks, houses and even cars. Dried egg yolk can strip paint off of cars and stain exteriors, resulting in thousands of dollars of damage. The broken eggs left in parks chosen for Egg Wars can also harm the health of children, dogs and wildlife.

In 2009, a notorious Egg Wars incident enveloped Paly in controversy. On Oct. 27, students had moved Egg Wars to Henry M. Gunn High School after being kicked out of Stanford University by campus police. Students then left Gunn covered in cracked eggs, which were found the next morning by Gunn students who were still mourning the recent loss of a student to suicide.

According to a 2010 Palo Alto Online article, the Oct. 27 Egg War damaged Gunn’s new track, scoreboards and pool deck, requiring a professional cleanup at a cost of $3,200.

The actions of the estimated 200 participants led to a major crackdown back at Paly. The school’s administration halted a lunchtime rally and announced the termination of Spirit Week along with a detailed investigation of students suspected of participating in the event. Soon after, administration handed down a mass suspension to all students they found to be involved, which led to a sit-in of the Tower Building. The suspensions were later rescinded due to community backlash.

Just before the Class of 2020 entered Paly as freshmen, former Principal Kim Diorio began cracking down on the decades long tradition of streaking on campus. According to a 1996 article by The Campanile, streaking as a tradition began in the early 1990s, when a student ran naked across the football field during a rally.

Paly alumna Esme Stotland from Paly Class of 2019 recalled that during her first Spirit Week at Paly, a student ran across the field completely nude and covered only by a mask.

“We all just thought it was funny,” Stotland says.

Hall, on the other hand, found the tradition to be offensive and problematic to children, parents and teachers alike.

Streaking effectively came to an end in 2016 when Assistant Principal Jerry Berkson enforced suspensions for all who participated in the tradition. Various issues, such as religious concerns, sexual harassment and overall disfavor from students were publicized to the student body to prevent any other attempts from occurring. The crackdown was successful, and according to Berkson, Paly has not seen a streaker in three years.

As certain senior traditions fade away, new ones are being created. In the past few years, traditions like painting the senior deck, senior no-pants day, the wall of college rejections and the paper toss on the final day of school have found their way into Paly culture.

As seniors celebrate their last year of high school, underclassmen and juniors wait in anticipation for their senior year filled with camouflage and domination. Throughout Paly’s history, many traditions have blown through campus. Although some have been controversial, it can be argued that the best part of Paly culture is the class-uniting activities, creating an outlet for fun in the midst of high school stress.

So fresh so clean so 2019: Seniors reminisce on the past four years