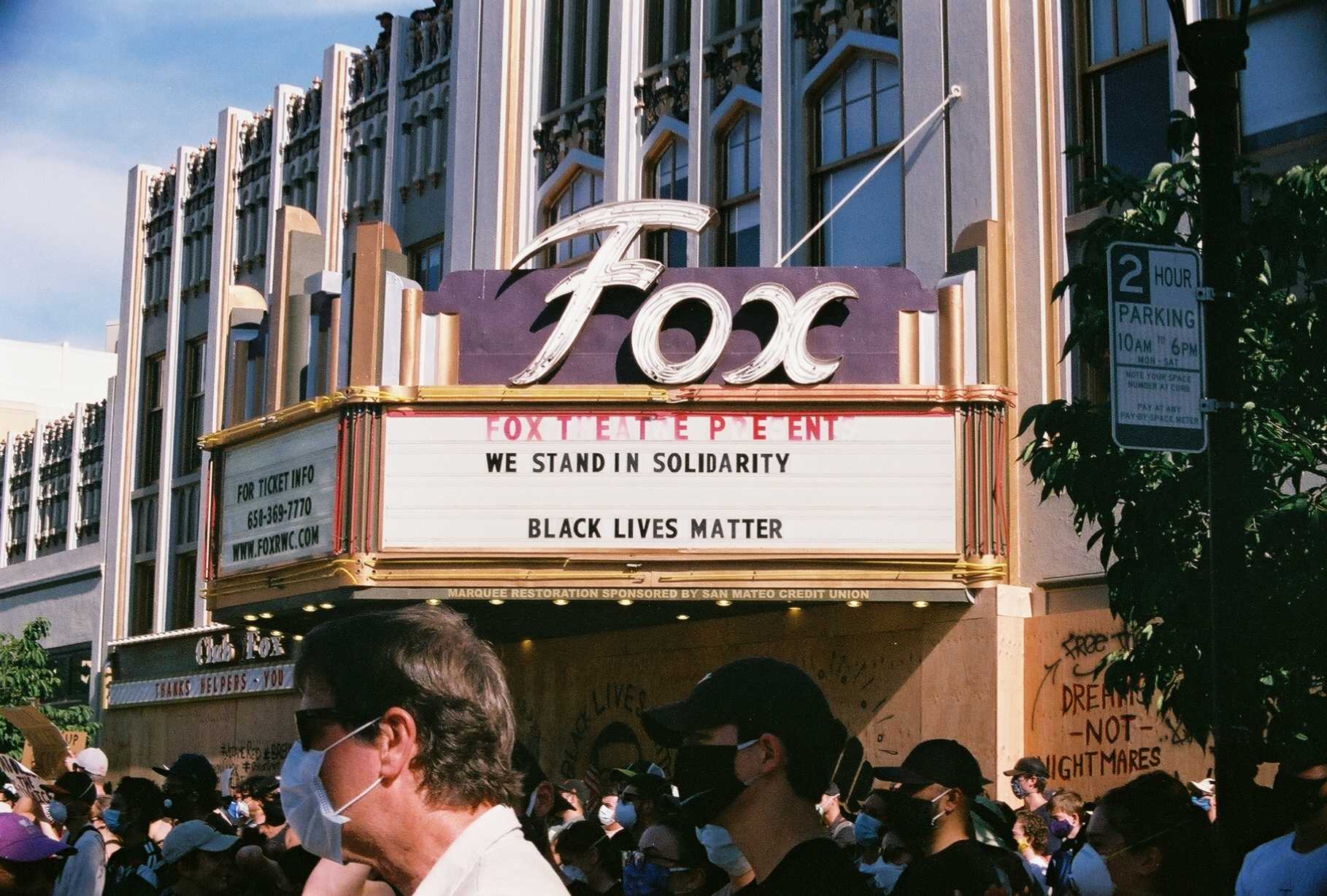 ACTIONS SPEAK LOUDER — This past summer, numerous Black Lives Matter protests were organized through social media and held across the Bay Area, including a rally held in Oakland. “While it [posting on social media] is a step in the right direction ... people really need to take the next step of organizing in their community,” said Juliana Griswold, co-president of Paly’s Leftist Club. Photo: Audrey Joachim

The video flickers to life, revealing Palo Alto High School senior Ryan Yeung standing center screen and solemn-faced amid a wall of blue and orange text boxes. He wastes no time in recounting the story of a teen boy who saved hundreds during the Parkland School Shooting, illuminating the actions of this unknown hero with nothing more than blocks of text accompanied by the melancholy chorus of The Fray’s iconic “How to save a life.”

Yeung is one of countless students using social media to spread awareness and advocate for change. His activism-based TikTok account, theforgottenstories.project, has gained a large presence on the platform with a goal to spread the word of lesser-known social justice cases and stories.

The increased popularity of the Black Lives Matter movement, sparked by George Floyd’s death in May, fueled the recent growth in social media activism. Almost overnight, feeds that previously documented daily life overflowed with video clips of Floyd’s arrest and petition links to bring justice to his case.

According to an opt-in Verde poll of 290 students conducted in September, 53.9% of students participated in social media activism this spring.

Students reposted informational posts on racism, linked resources for others to learn more and take action, and organized and publicized protests through their social media accounts bringing many people out of their homes and onto the streets.

Over the course of a few months, users began focusing on other issues such as the Yemen crisis and the explosion in Lebanon.

“It’s definitely helped me gain new resources and websites to help donate for a cause or support a petition,” junior Arohi Bhattacharya said.

Since the rise of BLM, social media has become a cornerstone of activism, forever changing the standards for digital content.

Fascism is characterized by totalitarianism, extreme social conservatism and brutality. It cannot be combatted by peace alone. No justice, no peace. 📷: Wikipedia commons #ACAB #antifa #nojusticenopeace 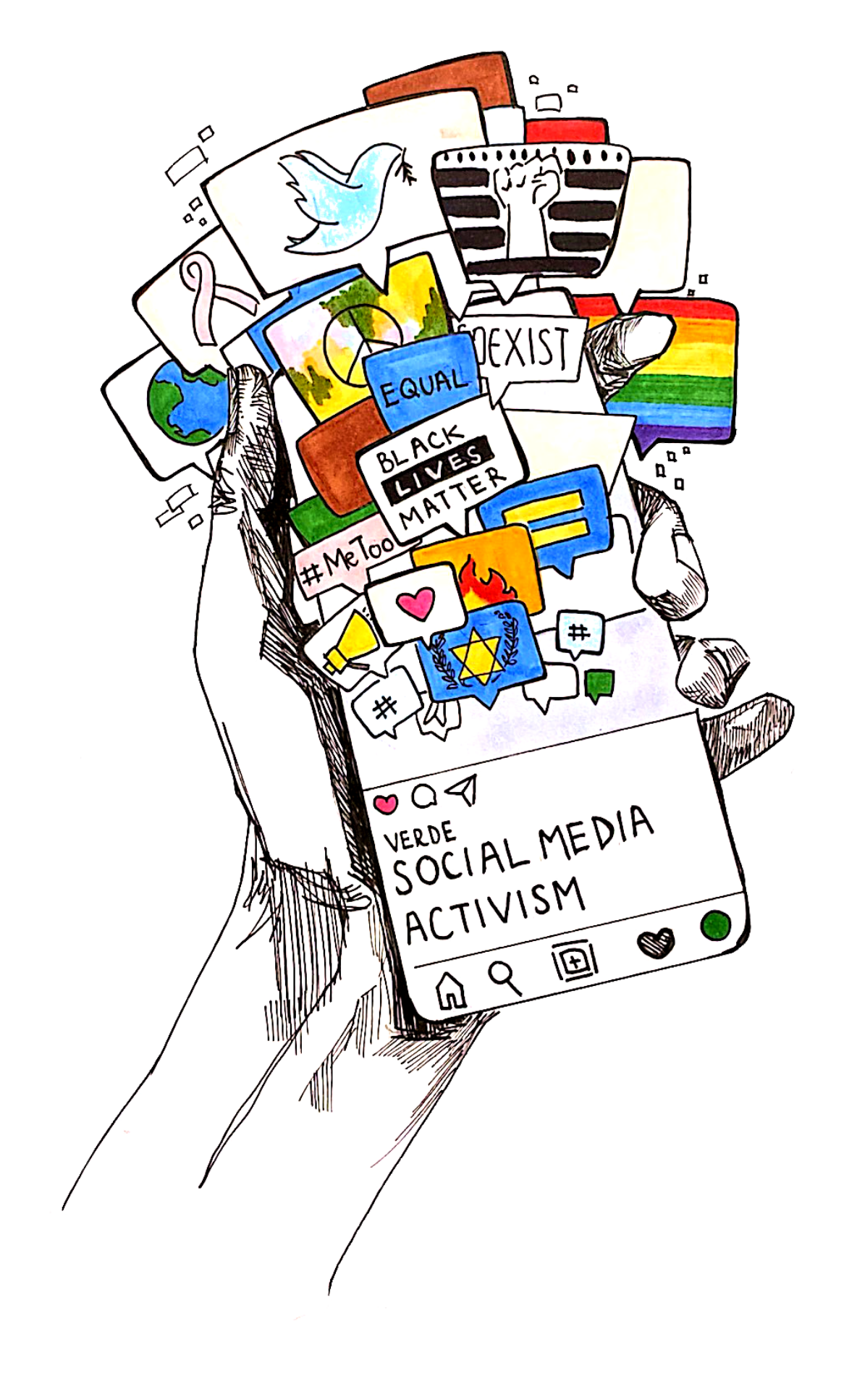 As the popularity of the BLM movement and other social justice movements continue to skyrocket on platforms such as Instagram, TikTok and Twitter, more users are questioning if the number of students reposting these issues online accurately reflects the number of those dedicated to these causes.

“I would say there are way more people reposting than getting involved,” Yeung said. “It is a lot easier to press a few buttons and act like you care than spend genuine time on the cause.”

Activists worry that the recent explosion of social media activism promotes posting and reposting as forms of battling systemic inequality, resulting in less incentive to actively work towards reform.

“While it [posting on social media] is a step in the right direction to making people care about what’s happening, people really need to take the next step of organizing in their community,” said Juliana Griswold, co-president of Paly’s Leftist Club. “Systemic change won’t come from social media posts and likes.”

Online, it can be difficult to determine where active participation ends and trend seeking begins. As BLM and other human rights topics sweep the media, a simple repost of these issues rewards minimal effort with maximum gratification.“So many people have begun to treat human rights like a trend,” Barrett said. “They commodify the movement for likes, followers and social capital.”

As social justice issues are rendered hashtags and retweets online, students and activists worry that social media’s trend-obsessed culture undermines the strength of causes they advocate for.

“I would say there are way more people reposting than getting involved.”

Blackout Tuesday is a frequently cited example. The global movement in May sent millions flocking to social media, each posting a single black square in protest of racial inequality and police brutality. However, the trend quickly received backlash for clogging the Black Lives Matter hashtag with a sea of black tiles, preventing users from finding useful resources on the topic. Furthermore, the bandwagon nature of the movement was widely characterized as shallow and performative. Hundreds of users jumped on the trend to share their black tile without contributing any further efforts to advocate for the BLM movement.

“A lot of people did it because everyone else did, maybe without realizing the real purpose or meaning,” senior Emma Wu said. “But it was also cool to see that level of solidarity, and hopefully people spent the day learning about Black culture, history, and experiences from Black voices.”

As social justice advocacy continues to dominate the media, students grapple with subsequent questions that begin to arise: does the online circulation of social justice posts qualify as activism? Is social media advocacy fueled by a desire to validate ourselves or to spark real change? Are online movements being utilized to initiate reform or to earn a few quick followers?

“I think that the general viewpoint [of students] is supportive of social activism, but I think that it’ll take more than a week or month for real change,” Wu said. “We’ll have to see how people really feel especially when social activism isn’t trending.”

black lives matter. this is not a trend. this is a movement that calls for serious action. i’m always skeptical of social media trends because they run the risk of framing the BLM movement as a trend. there’s nothing inherently harmful about sharing this black square, it’s important to express solidarity, but just remember that saying “i stand with you” and throwing in a hashtag is literally the bare minimum of what you can do. don’t use this as an excuse to become complacent and inactive. the goal of #blackouttuesday is to disconnect from work, reconnect with your community, and amplify black voices. link in bio for ways to take action. ♥️

Those who use social media are likely familiar with the numerous educational posts that provide information about an issue. It is easy to read a list of facts and accept them as truth, but it is more difficult to catch the falsehoods in a constant flood of informational posts.

A big risk that comes with social media activism is the spread of misinformation. A well-known example of this concerned the lack of Palestine’s label on Google Maps in July.

Uproar ensued as users accused Google Maps of removing Palestine from the map when it was never there to begin with.  According to Express.co.uk, the United States does not recognize Palestine as an independent state, so Google, an American company, does not recognize it either.

When people repost information without doing the appropriate fact-checking, they end up spreading false information rather than educating people. With the perpetual flow of new information, it is important to check the facts before taking action.

“I don’t generally use the specific resources that people provide on social media … but rather use it as a base for myself to do research on the topic and find reliable sources and petitions and etc. to sign and advocate for myself,” Bhattacharya said.

[UPDATE]: THIS POST CONTAINS FALSE INFORMATION AS PALESTINE WAS *NEVER* PUT ON WORLDWIDE MAPS. However we have to spread awareness on this issue. Because maps develop to our national consciousness. We NEED our voices to be louder this time. Use your voice. Use your power. This is a revolutionary year, and we will fight for the needed change to bring Palestine on the maps. #FreePalestine

It’s no secret that in recent years, the political climate both on social media and across the country has become increasingly polarized and fraught with tension. The wide variety of opinions among social media users contributes to a diversity of ideas online, but conversations on these platforms are often more talking than listening.

“As long as people can have civil discussions about politics and listen to the other people’s points of view to understand where they come from, online interactions can be positive,” Griswold said. “But I don’t think this is usually the case.”

Threads of heated political debates turned personal attacks are often difficult to avoid when navigating the waters of social media activism. Student activists describe becoming the targets of threats and hate speech online as a result of their political opinions.

“I have gotten hate and judgment from others,” Yeung said. “I’ve been called many racial slurs in comments, personal messages and when going live on TikTok.”

Despite the negative comments activists often attract on social media, many consider their causes to be worth the risk.

“I’ve been able to see a lot of the impact I have made through personal messages of how they learned so much from my account, and how they learn more from my videos than their history or English class,” Yeung said. “These experiences make all the work my organization and I put in extremely rewarding.”

Despite risks of conflict and performativism, social media platforms continue to provide one of this generation’s most widespread tools for advocacy, enabling students to organize movements and rallies pushing for reform. As online activism continues to grow, so do opportunities for movement builders to spread initiatives for change.

A peace of their minds: Students define their activism