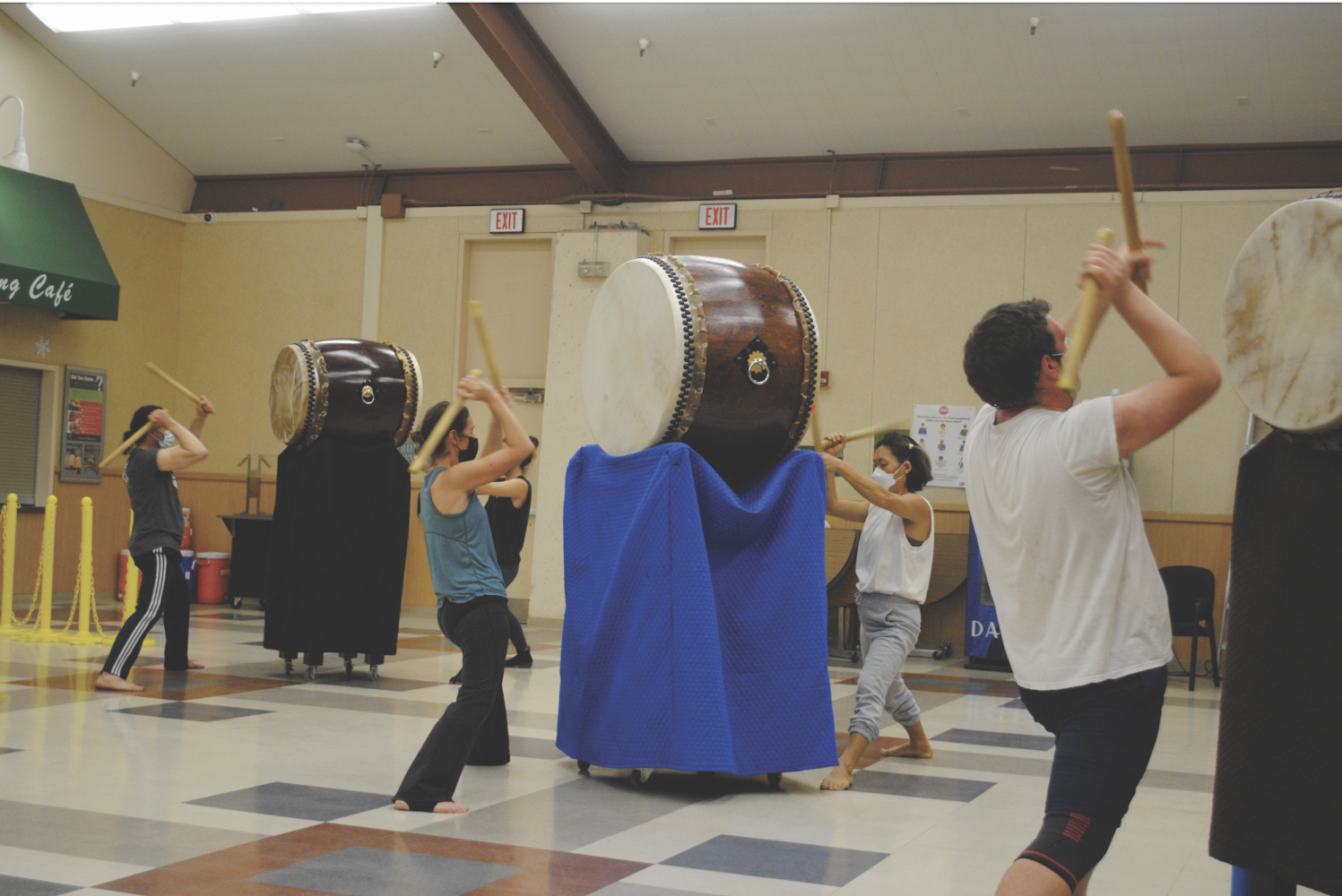 Crouched down with her arms raised high above her head, Pilar Beccar-Varela swiftly shifts her body weight forward to beat a large raised drum, filling the air around the Palo Alto High School Student Center with the booming rhythmic sound of Taiko. In unison with her four ensemble mates, Beccar-Varela lets out a dramatic shout and begins to speed up the tempo of her playing, building up to a rousing finish.

Taiko, a distinctive style of Japanese drumming, is an art form that is rapidly growing in popularity, according to Stanford Taiko. During Taiko performances, artists stand playing a set of massive upright drums, mixing in energetic body movement and enthusiastic whoops.

Originating over 2000 years ago, Taiko was first performed during religious festivals and as a method of communication. With various types of drums lifted on wooden stands — ranging from the muffled sounding Shime used to play fast rhythms to the higher-pitched Hirado drums that accompany folk singing — Taiko has transformed from a form of accompaniment to a fascinating performance art form in recent years.

The art form of Taiko first arrived in the United States in the 1960s, and a small community of Taiko drummers began to form in the Bay Area. This community has since grown, with groups including San Jose Taiko, Drum Revolution and Stanford Taiko performing frequently at local events and festivals.

“Taiko is very new as a musical instrument,” Sumii said. “In only the last 40 or 50 years it’s become popular, but before then, Taiko wasn’t the instrument to perform.”

When Taiko student Beccar-Varela first saw a Taiko performance at a theater in Berkeley, she was immediately captivated.

“Within the first 30 seconds I started to cry and I was like, I need to do this,” Beccar-Varela said.

The Japanese drum also caught the attention of Matt Adelman, another Drum Revolution ensemble member, when he discovered the instrument at his university orientation. After finding Sumii’s Drum Revolution program, Adelman grew to appreciate the tiring, yet captivating, art.

“I love the brain-body synergy of thinking really hard about rhythms but also being exhausted at the same time,” Adelman said. “You’re getting both the mental and physical parts of it all coming together.”

However, with Taiko being an extremely strenuous activity, Adelman said it takes practice to adjust to the different stances and unceasing body movements, especially for beginners.

“Being able to play for even three minutes is very difficult,” Adelman said. “When I was [teaching] the class for the beginners, the thing that really got them was doing one minute of just continuous play.”

“I love the brain-body synergy of thinking really hard about rhythms but also being exhausted at the same time.”

For many beginners and seasoned performers alike, Taiko gives them a personal insight into their strengths and capabilities, as well as a unique musical experience.

“[I learned] that I’m capable of more than I thought I was in terms of just being able to push myself and keep going even though your arms feel like they’re going to fall off,” Beccar-Valera said.

After years of weekly practice and dedication, Sumii’s group of musicians can withstand three-hour sessions of grueling, yet gratifying, drumming.

“My favorite part of class is sound uniformity,” Sumii said. “If we can create a uniform sound that’s really good … it’s a good feeling.”

As the Taiko community inside the Bay Area continues to grow, Sumii hopes that he can spread Taiko to younger generations as well.

“There are many college Taiko groups, but no high school Taiko groups,” Sumii said. “I’m hoping someday in the near future I could create a Palo Alto High School Taiko class.”

Drum Revolution will be performing at the Palo Alto High School Performing Arts Center on April 2.