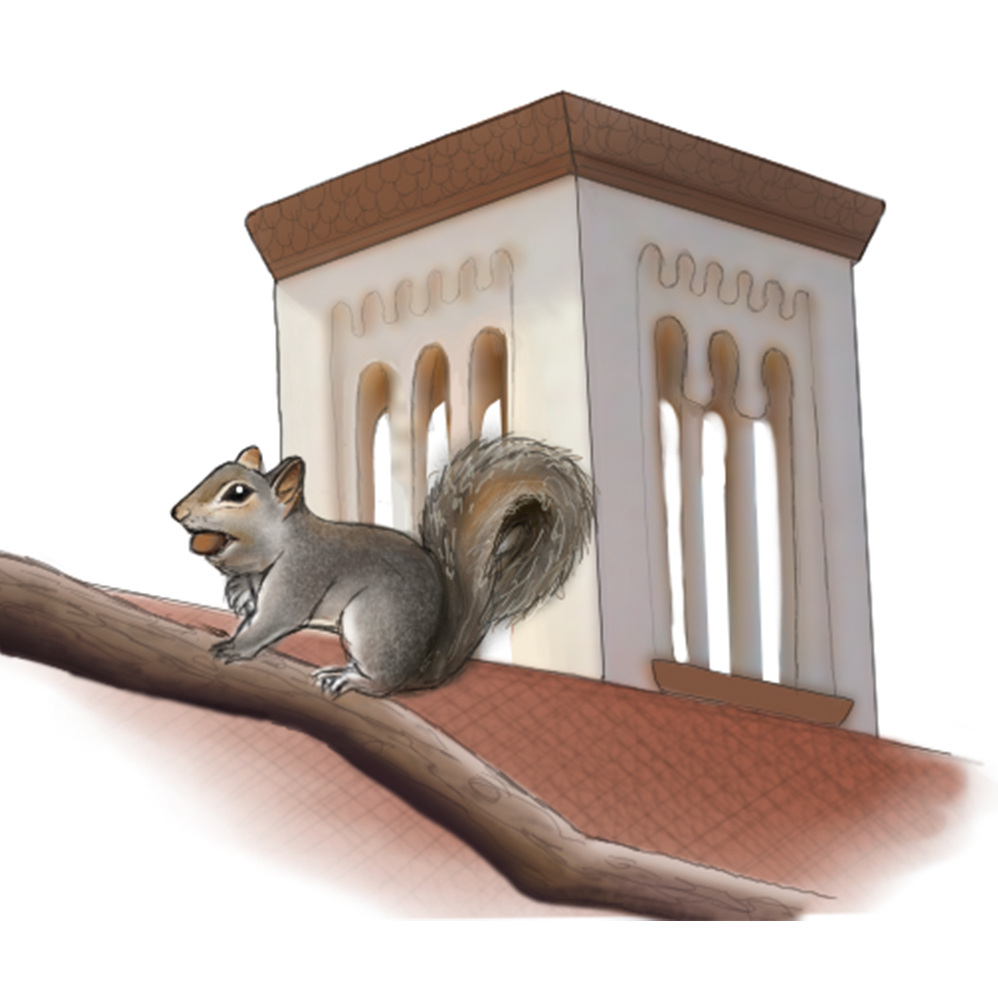 Opinion: The secret lives of squirrels: Observations of my favorite campus critters

Fully engrossed in a game of chase, a squirrel scampers from another squirrel up a scrawny tree, leaping onto a weak branch. Almost in slow motion, the branch begins to give way, and the creature falls back first into the grass below. Immediately getting back on all fours (and undoubtedly embarrassed), the squirrel hurries away into the bushes.

Since I began attending Palo Alto High School, I have paid close attention to the swift and surprisingly aggressive squirrels that seem to reside in the school’s ecosystem. My interest in Paly’s squirrels — animals I like to call “bush-tailed squigglers” because of their puffy, S-shaped tails — began freshman year as I spent many class periods gazing longingly out classroom windows which were perfect for squirrel watching

Though finding squirrels was a great cure for my boredom, these bush-tailed squigglers were often hard to locate, possibly concealed within a network of tunnels and aerial tree pathways above campus to avoid noisy crowds. If only squirrels would allow themselves to come out of their hidden places and embrace Paly’s vibrant school spirit — I think fur and senior camouflage go quite well together.

But last year, the campus became a barren free range for squirrels to play all day, every day. Due to COVID-19, students were scarce and the squirrel population thrived (unlike the students holed up in their houses). The campus was a great squirrel habitat, with acorn-filled oak trees, shady bushes and few predators (unless you count freshmen).

If only squirrels would allow themselves to come out of their hidden places and embrace Paly’s vibrant school spirit — I think fur and senior camouflage go quite well together.

As one of the first students on campus last spring, I had many encounters with squirrels in walkways as they dove into trash bins, chased each other in between buildings and on one frightful occasion, fell out of trees like tumbling fruit.

With students back on campus, a squirrel’s day is packed with adventure — between dodging lumbering football players and gathering food to survive for the winter.

Intrigued by the lives of my furry co-habitants on campus, I set out to watch them around the Tower Building and library and document their daily routines. This is what I found:

Squirrels are usually very busy in the morning, looking for food while sticking to specific territorial bounds. It appears that grey and black squirrel groups often don’t mix. Most of the time, grey squirrels can be found near the Tower Building while black squirrels gather near the language building. The rivalry between black and grey squirrels has yet to be determined, but I have been on the lookout for an organized acorn war between the two clans (outside of Paly’s property and after school hours, of course).

At midday, squirrels are still digging for acorns, seeds and insects. In the fall, squirrels look to be gathering their winter supplies, and I have seen them hiding food on the Quad — perhaps preparing for the squirrel equivalent of the Student Center’s “restaurant.”

At dusk, the number of squirrels that can be seen on campus seems to increase, even though squirrels are not nocturnal animals. They use this time to peacefully scavenge for food without the looming threat of students and staff. Squirrels are finally safe from any human commotion and settle into their nightime routines. Unlike Paly’s daytime inhabitants, squirrels aren’t preoccupied with lengthy skincare routines — not concerned with acne and body odor. Instead the squirrels wind down by enjoying the cool night air.

Being fully committed to this story, I spent a Friday night observing squirrels at Paly. Nocturnal life for a squirrel is quiet except from the few (probably APUSH students) who are still awake. The vibrant buzz of the late afternoon is long gone by then, and I am guessing most squirrels have gone to sleep, tucked into their earthly beds. The singular squirrel I saw appeared to be wandering around in the dark, probably on its way to a meeting to secretly plot the downfall of the student body.