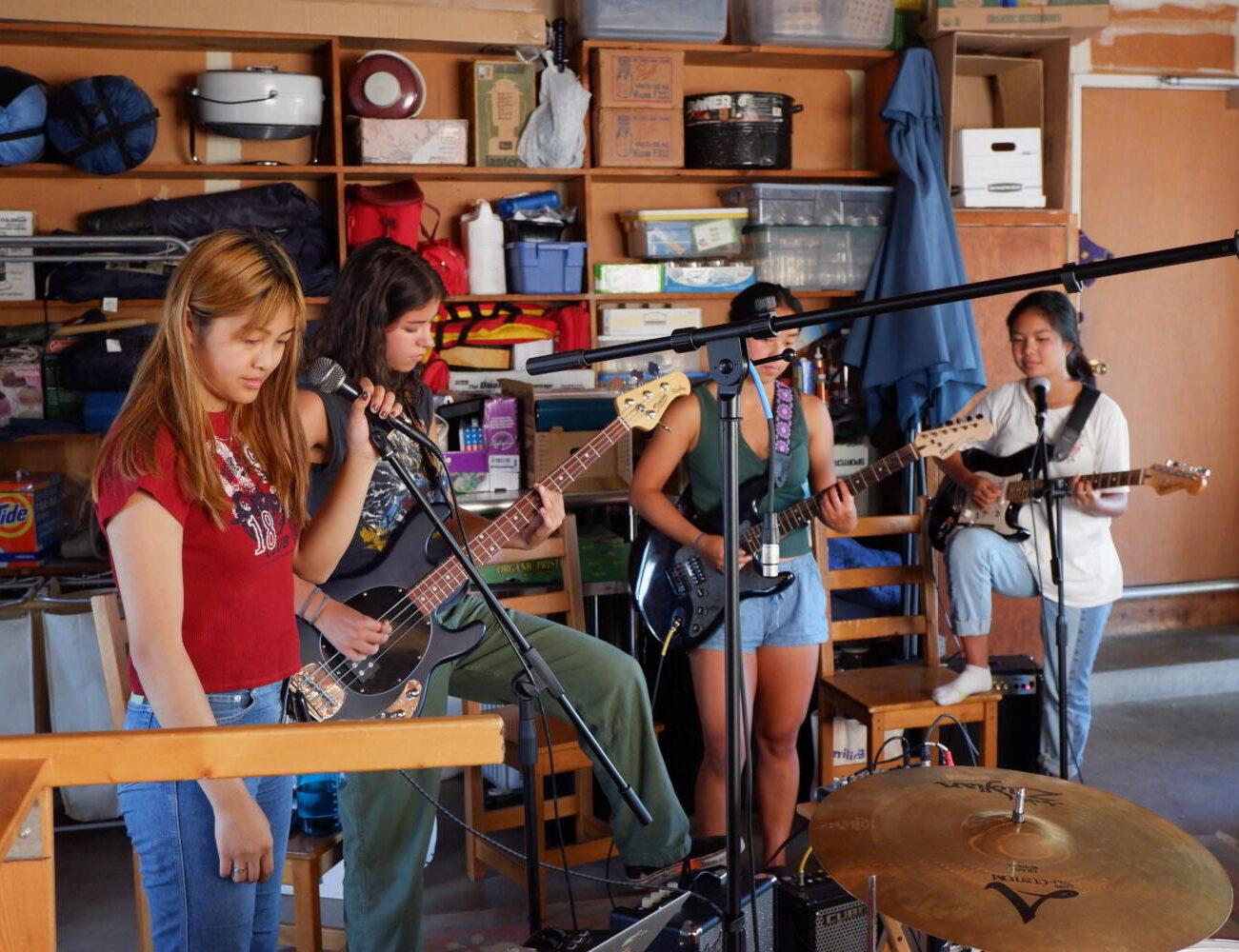 SUNBEAR ON THE STAGE — One of Sunbear’s specialities is their ability to switch between instruments and be flexible with what parts they play during a particular song. According to bassist Sedona Silva, being able to switch parts like this requires time, dedication, and most importantly, practice. “There’s more teamwork involved than actual sports,” Silva said. Photo: Ines Legrand

Palo Alto High School senior Sedona Silva presses play on her thrifted cassette player, and with a soft click, the gloomy garage lights up with the resonant, crackling opening notes to the Talking Heads’ “This Must Be the Place.” As the music fills the empty space, the five members of Sunbear, a Paly band, set up their instruments, plugging guitars into amplifiers and raising microphone stands. The sound of excited laughter soars over the low drone of their machinery. The energy in the room is unmistakable, and as the members begin to tune their instruments over the hum of the cassette player, the group’s chemistry is evident.

Sunbear, an up-and-coming Paly band, is made up of five female seniors: Vienna Liu, Charlotte Noroian, Hannah Yau, Tara He and Sedona Silva.

After years of playing together informally and joking about starting a band, Sunbear was born in Jan. 2021 when the band members began practicing consistently.

According to Liu, quarantine was the paramount factor in the formation of the band. The combination of extracurricular cancellations and the transition to online school opened up more free time for the band to practice.

“It [the pandemic] has brought us together,” Silva, the band’s bass player, said. “We … [were] allowed to make a little bubble with our band and still practice together.”

“It [the band] helps me progress in my own instrument because I can set goals with the other members.”

While isolated at home, each of the band’s members developed their individual musical skills. However, they found that playing as a group allowed them to improve these skills at a much faster speed.

“It [the band] helps me progress in my own instrument because I can set goals with the other members,” Noroian, the band’s drummer, said. “That helps me, and it’s cool to be able to play with other people.” 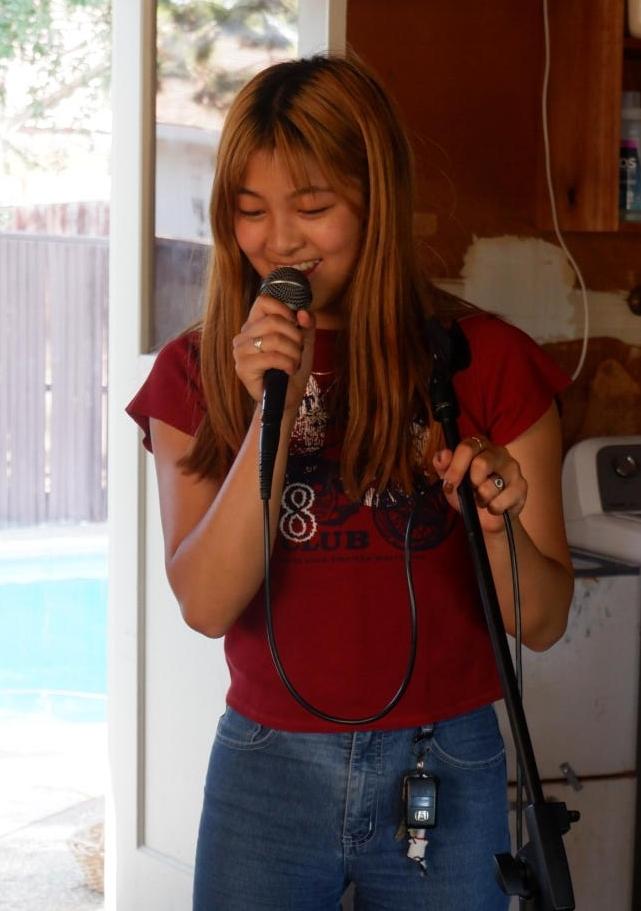 READY FOR REHEARSAL — Paly senior and Sunbear vocalist Tara He tests out her mic. According to He, Sunbear’s chemistry makes their band effective. “We all like each other,” He joked. Photo: Ines Legrand

Over the past few months, the band has mainly played a set-list of covers. The band cites many different artists as their musical influences, spanning multiple decades and genres. However, the majority of the music the band plays falls into a blend of alternative rock and indie styles, including an emphasis on sounds from the 1990s.

According to Liu, the first song the band ever played together, “Santeria” by Sublime, has become a “Sunbear Staple” at each of their gigs.

Although covers often showcase the artistic expression of others, the members of Sunbear put their own spin on the songs they perform.

“It’s been really cool to work out how and when we’re going to end one of our covers,” Noroian said. “We’ll make different musical endings, and we even added an intro so that it would flow from the last song we played into the next one.”

“Reworking is cool because making those adjustments allows us to be creative within the boundaries of what someone else has made.”

Noroian believes that these musical embellishments enable Sunbear to personalize their songs while still respecting the framework of the originals.

“Reworking is cool because making those adjustments allows us to be creative within the boundaries of what someone else has made,” Noroian said. “It adds our group’s own sound to what would otherwise be a copy-and-pasted cover.”

While Sunbear has only played covers in the past, the five members are working on writing original music in hopes of performing it soon.

“When we write our own original music, we’re influenced by alt-rock bands like the Strokes,” Silva said. “We are also inspired by bands from the 90s and 80s, like the Pixies and the Breeders.” 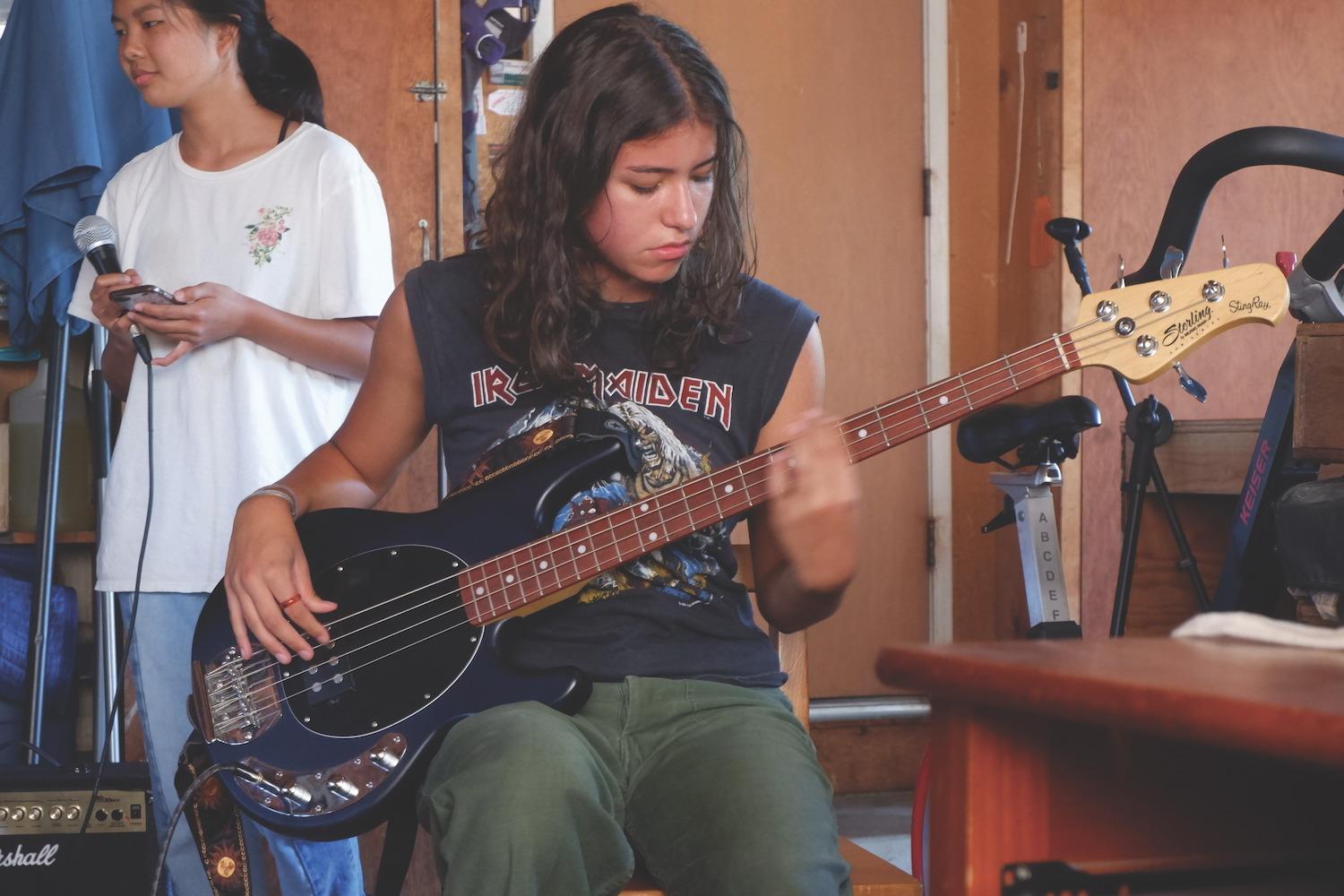 TUNING UP — Paly senior Sedona Silva tunes her bass before one of Sunbear’s rehearsals. While Sunbear meets every weekend to practice, the rehearsals aren’t all business. “We’re just having fun,” Silva said. “We don’t take it too seriously.” Photo: Ines Legrand

Through being an all-female band, the members of Sunbear say they feel as though they have obtained a unique perspective and additional opportunities in their musical aspirations.

“It has set us apart from other bands, because it’s a male-dominated industry,” Silva said.

However, Silva says the members of Sunbear do not feel their gender is a central part of the band’s identity.

“Being an all-female band isn’t really what defines us,” Silva said. “I don’t want it to be like, oh, like they’re a girl band.”

The band emphasizes the importance of normalizing being all-female in the music industry instead of over-highlighting it. In the end, Sunbear wants to be known for its creativity and unique sound, regardless of its members’ gender.