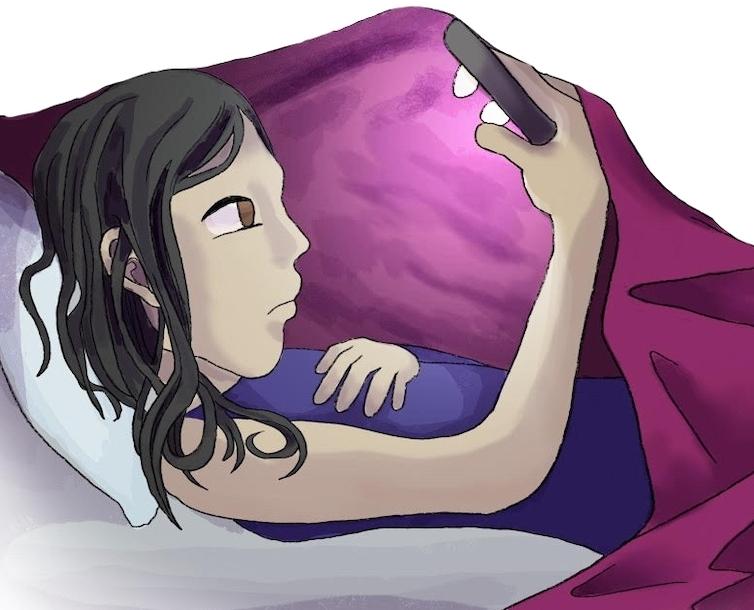 From bragging about who got the least sleep the night before to drinking triple shot lattes every morning, the Palo Alto culture revolves around sleep deficiency.

Palo Alto High School junior Trisha Razdan tends to get about five hours of sleep a night, but a recent pile-up of commitments only permitted her to get two.

“I left an AP Chem [Advanced Placement Chemistry] lab to the absolute last minute and I had a volleyball game that night so I got home late,” Razdan said. “Of course, I also had a math quiz that day. Needless to say, I didn’t do amazing on the quiz and was just so tired the whole day.”

Sleep deficiency among Palo Alto students like Razdan is common — the norm, even. Between balancing school, extracurriculars, a social life and sometimes even a job, sleep falls lower on student priority lists. Throughout the years, sleep culture in Palo Alto among generations has seen differences as well as consistent trends.

Sleep insufficiency has become so common in Generation Z and Millennial students that some say students are shocked at the idea of someone getting the recommended eight to 10 hours of sleep. Verde conducted a survey in September 2019 that collected data from 187 Paly students in randomly selected English classrooms across all four grades. According to the survey, 70.8% of Paly students claim that they do not get enough sleep on an average school night.

“People don’t really think it’s that big of a deal if you don’t get a lot of sleep because everyone is pretty used to it,” freshman Kellyn Scheel said. “A lot of my friends actually don’t have very good sleep schedules.”

Fiona Barwick, who has a doctorate in clinical psychology and is the director of the Cognitive Behavioral Sleep Medicine program at Stanford, has noticed that certain aspects of modern-day culture have turned sleep into an accomplishment rather than a given.

“When sleep is working, we don’t even think about it,” Barwick said. “It’s a totally passive process.”

Instead, students find themselves choosing between getting a sufficient amount of sleep or finishing their homework, as extracurriculars and academics take up such a big portion of the day.

“A lot of us in the area are overachievers and with that status comes a lot of work to do, school-wise, sports-wise and extracurricular-wise, so I think the way a lot of us manage these activities is by sacrificing the amount of sleep we get,” Razdan said.

According to the survey, 85.8% of Paly students say homework is the leading cause for their lack of sleep, with extracurriculars in second place and difficulty falling asleep in third. On the contrary, students’ sleep deficiency in other generations seems to have happened of their own accord. This is in stark contrast to the reasons behind sleep deficit in previous Bay Area generations.

“When I stayed up late it was to hang out with friends or my boyfriend who was in college and had college hours,” class of 1989 Paly alumna Mary Cudahy said.

While students themselves are sleep deprived, more attention is being brought to the issue, seen through recent scientific studies, advisory lessons and day-to-day conversation. However, these trends are notably different from those of past generations as told through Palo Alto Generation X alumni.

“It [sleep] wasn’t a big issue, so we never even really talked about it,” class of 1984 Henry M. Gunn High School alumna Chris Kanazawa said. “No one ever talked about not getting enough sleep.”

Both Kanazawa and Cudahy say that sleep was rarely talked about by teachers, parents or friends. An absence of conversation about sleep deficiency leads to a general lack of awareness.

“People will report their sleepiness but then it will eventually plateau. We don’t even realize how impaired we are.”

With the present-day rise of sleep deficiency, this discussion can help students gain more knowledge about its damaging consequences. According to Barwick, getting less sleep than recommended for over two weeks is roughly equivalent to total sleep deprivation for three days in terms of daytime performance.

“People will report their sleepiness but then it will eventually plateau,” Barwick said. “We don’t even realize how impaired we are.”

Sleep deficiency has many detrimental effects on the body. The brain’s frontal lobes are targeted, which impacts executive functions such as the regulation of emotions and the ability to reason and problem solve.

Paly students are coming up with ways to cope with sleep deprivation, and a popular method is for students to consume caffeinated drinks, which contributes to Paly’s “coffee culture.”

“It’s gotten to a point where I drink so much [coffee] that if I don’t drink enough then I get really bad headaches and I just can’t function,” junior Alli Miller said.

With Town and Country Village just across the street, coffee becomes an easily obtained solution to staying awake and alert throughout the day.

“I don’t think I would get coffee during the day as much because it would be really hard to go out of my way to get coffee,” junior Malia Wanderer said. “I think Paly’s proximity to Peet’s allows me to make a coffee run during the last minutes of lunch if I have time.”

“I think Paly’s proximity to Peet’s allows me to make a coffee run during the last minutes of lunch if I have time.”

Coffee consumption also seems to have been typical in previous generations at Paly due to its convenient location. However, to Cudahy, the motives behind the activity had less to do with battling sleep deficiency, as it served more as a social activity with her friends.

“I got coffee at Douce France every day and was not alone,” Cudahy said. “Coffee was a big thing.”

The effects of tech

An important lifestyle change students can make to improve their sleep is to reduce screen exposure before bed. Barwick said that students should stop screen usage ideally two hours before bedtime, but even one hour would suffice. The Verde survey, however, concluded that 63.2% of Paly students put away their screens only moments before they sleep, affecting their natural sleep cycle. 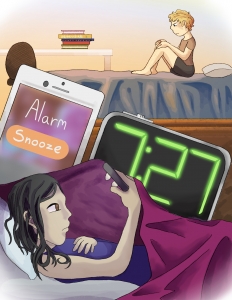 Barwick explained that melatonin — the main sleep-inducing hormone — increases a couple of hours before bedtime, peaks around mid-sleep and then comes down a bit before waking up. The emission of blue light, produced by screens, suppresses and delays melatonin production, which ends up preventing one’s body from properly reacting to sleep cues.

The accessibility of technology has proven to be a prominent change from generation to generation. Screens were not as readily available, so blue light consumption was not as big of an issue, nor were the distractions that technology brings to teens.

“I think it [technology] definitely has made a difference — we didn’t even have computers. All our homework was handwritten, and so we didn’t have screens,” Kanazawa said. “We didn’t have all the social media distractions and video games that come on your phone or your computer.”

The modern day sleep culture still makes sleep deficiency the norm, with kids comparing hours of sleep and prioritizing studying over rest. However, the overall awareness about the necessity of sleep in teenagers has increased in newer generations as the issue has become better recognized.

“We’re all big fans of people recognizing the importance of sleep and doing what they need to prioritize it,” Barwick said. “There have been efforts to get the information out there to inform the public, probably over the past 20 or more years, but I think it’s only been taking hold over the past five years.”

Don’t scrimp on sleep: The insidious harms of sleep deprivation

The beneficial nature of sleep experiments

The new deal for students: Refining the homework policy