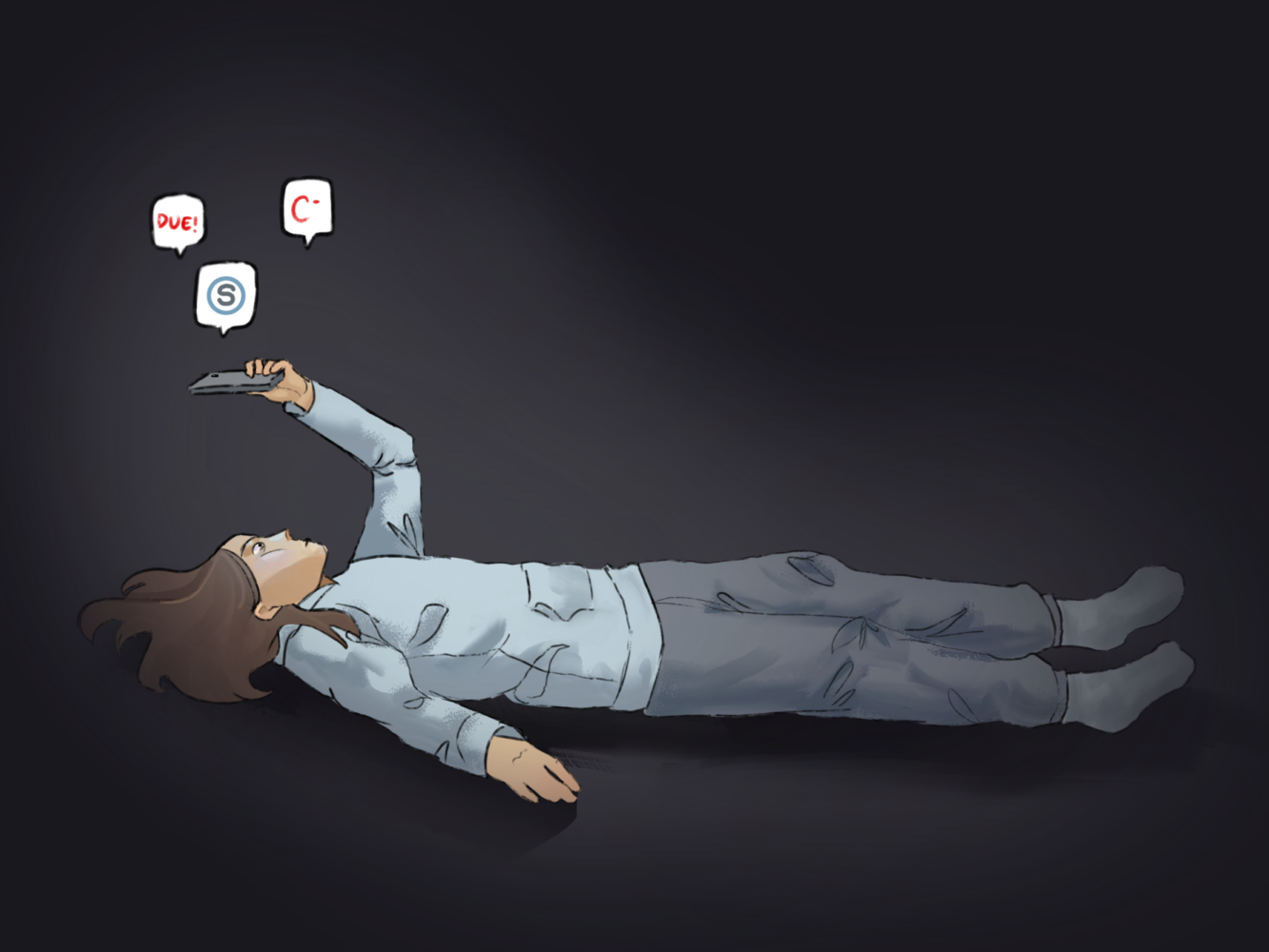 Settling for Schoology: Assessing the takeover of online school applications

Surrounded by friends, Palo Alto High School freshman Lavanya Serohi was having fun and relaxing at a birthday party when her phone pinged with an incoming notification. Seeing it was from Schoology, she quickly turned her phone off, making the decision to ignore it and get back to the party.

The intrusion of school into social lives and free time by online school applications like Schoology and Infinite Campus is something familiar to many Paly students. An anonymous opt-in survey by Verde of 250 Paly students collected from Nov. 1-3 had nearly 86% of respondents indicate that they had school-related applications on their phone. However, only 28.8% of students surveyed believed that school apps added to their stress at any time, although 92.2% reported that they used these platforms anywhere from one to six hours per day. Furthermore, an overwhelming majority, 97.6%, agreed that school-related apps are convenient.

Junior Lukas Pahlm is one of many students at Paly who has the Schoology app on his phone, easily accessible at any moment. Pahlm said he keeps his notifications off.

“With the iPhone app, you can change your settings so you don’t get notifications from them. It’s your own choice if you want to do that, whatever is best for you,” Pahlm said.

New to the Palo Alto Unified School District this year after moving from Sweden, Pahlm used an online school application different from Schoology at his old school.

“My application at my old school was pretty terrible too,” Pahlm said. “So I’d say they’re pretty much equal.”

“I like having my assignments due in-person in the morning because it gives me more flexibility.”

The default due date of 11:59 p.m. on Schoology is a stressor for Serohi.

“Due dates [online] kind of freak me out,” Serohi said. “Late at night [due date times] are worse [than earlier times] because then I don’t get enough sleep.”

Furthermore, having access to grades instantly from anywhere can be challenging, as Sophomore Susanna Aufrichtig said.

“Even if I don’t have my computer, I can just check it [test grades] immediately on my phone,” sophomore Susanna Aufrichtig said. “If I didn’t perform well on a test, it can kind of weigh me down.”

Before school applications, the only option for teachers would be to have students hand in assignments in-person at school.

“I like having my assignments due in-person in the morning because it gives me more flexibility,” junior Audrey Guo said. “[Then] I can work on it in the morning if I had a particularly bad day before.”

After weighing Schoology’s imperfections and the prospect of no online school applications, Pahlm prefers the benefits of Schoology, adhering to the consensus of Verde’s statistics survey.

“I think it would be in one way more stressful [to not have any online applications] because on Schoology you can see exactly what the assignment is if you didn’t quite hear what your teacher said or something like that,” Pahlm said. “It’s good to have an online way to organize all that.”

A return to in-person school this semester has led some students and teachers to reevaluate their usage and relationship with online platforms like Schoology and Infinite Campus. Paly librarian Sima Thomas began posting more frequently to the library’s Schoology page in the spring of 2020 after school shut down.

“I felt very alienated and I missed being here with everyone so I started throwing stuff out there [on Schoology] and like sharing book lists and little thoughts,” Thomas said. “I was hearing from people in the community; I’d run into students around Palo Alto and families saying, ‘We love your Schoology posts,’ it was a nice feeling like I was reaching someone.”

Students and teachers both have experience with finding the balance between checking school applications too much or too little.

“I think with the concept of Schoology, the pros are that it’s a really nice way of broadcasting information,” Thomas said. “I think the downside is  if you’re not in the habit of checking it, you end up missing things.”

AP Literature and Humanities teacher Mimi Park sees the value of keeping a boundary between school or work and free time.

“As with anything technological, if we have too great of a dependence on it, or if we can’t separate ourselves enough, where we’re constantly checking whatever the app is, then that’s when it becomes kind of problematic,” Park said.

““I felt very alienated and I missed being here with everyone so I started throwing stuff out there [on Schoology] and like sharing book lists and little thoughts.”

Park decided to retain some of the practices that had to be adopted for the online school year, for instance, posting online versions of lectures.

“I realized that a lot of my students do better if they’re able to access that information again [on Schoology] on their own time,” Park said. “We don’t necessarily want to bring back everything that we did on Zoom now that we’re in-person, but there are certainly things that I think have helped me become a better teacher in terms of supporting my students.”

In addition, Park believes students could use some more practice with technological literacy that could allow them to use school applications more efficiently and effectively.

“Because of all that practice the last [online] year, I think more students this year are proficient at using Schoology,” Park said. “In years before, students had a hard time finding things; there were so many apps to keep track of.”

As for the worry that 11:59 p.m. deadlines could cause students to put off doing their homework until the last minute, late at night, Park is not too concerned. Nearly 40% of Verde’s survey respondents indicate that they wait until the last minute to complete their school assignments frequently or very frequently.

“To be fair,” Park said. “I think that regardless of whether they were handed in [as a physical copy in-person] or not, if a student was gonna be late with an assignment, it was going to happen regardless, right?”