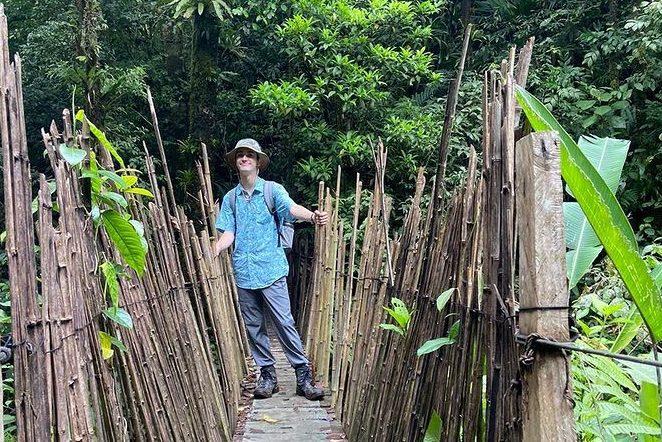 RAINFOREST TREKS — Senior Jack Compton stands on a bridge in Cloud Forest Reserve in Monteverde, Costa Rica, taking a photo via self-timer. When not in online school, he often takes hikes with other high school students at the campus where he lives. Photo: Jack Compton

After closing the Zoom screen on his computer at the end of 3rd period, Palo Alto High School senior Jack Compton wanders out of his room into the humid air of the Costa Rican highland rainforest. Looking out at the impressive mass of trees shrouded in mist, he takes in the beauty of the scenery where he studies abroad.

Although online school presents many challenges to high school students, it introduces a new opportunity for those interested in experiencing new places while still attending their classes over Zoom.

In the past, if a Paly student wanted to study abroad, they would have to transfer to a school in their new physical location. Now that Paly, along with many other schools across the nation, has transitioned to distance learning due to the COVID-19 pandemic, classes are accessible from anywhere in the world with a strong Internet connection.

Looking past his computer screen, junior Kip Saxon glances out his window at the starry night sky. While most of his classmates are just waking up, Saxon attends his Paly Zoom classes at night due to the time difference that comes with being halfway across the world.

Saxon relocated to Dresden, Germany, for the whole school year to take part in a soccer program he hopes will take his skills to the next level.

“Soccer isn’t as popular in the U.S. as it is in Europe, so I get a lot more recognition here,” Saxon says.

In Germany, Saxon plays soccer with boys his age from all around Germany and the United States while continuing all of his Paly classes — in addition to a German course through the soccer program.

“It’s definitely hard to focus when you have a test at 11 p.m., but I’m dealing with it pretty well right now.”

His average day consists of going to German class in the morning, soccer practice in the afternoon and then Paly classes from 8 p.m. to midnight because of the nine-hour time change. According to Saxon, the shifted schedule was challenging to get used to.

“It’s definitely hard to focus when you have a test at 11 p.m., but I’m dealing with it pretty well right now,” Saxon said.

One of Saxon’s favorite parts of being in Germany is getting to play soccer with a new group of people.

“Some of them know enough English to communicate, but it’s a unique experience in the way that there may be a language barrier but your passion for the sport and the friendships that you built from that are not hindered by that barrier,” Saxon said.

Culturally, Saxon also sees many differences between playing soccer in the U.S. compared to Germany, such as the juxtaposition in atmospheres before and after games. For example, in the U.S., club soccer players rarely use locker rooms to change before games — they simply meet on the field in their soccer gear.

“Here [in Germany] we have locker rooms that we come to 20 minutes before practice to change and get ready together,” Saxon said. “Also with away games, many parents are less invested in their children’s activities so here [in Germany] they take you in a van altogether.”

One drawback to the study abroad experience Saxon has faced is being physically away from his friends in Palo Alto. Although it’s not the same as staying local, Saxon has found technology to be a great method to connect with his friends back home.

“We get on calls sometimes and play video games together but it’s a little tough because of the time difference,” Saxon said.

Saxon’s experience abroad has motivated him to consider attending college in Germany.

“If I get proficient enough in German, I could potentially come here for college and not have to pay $40,000 to attend college in the U.S. because it is free in Germany,” Saxon says. “I’m definitely looking into that as an option for my future.”

While usually focused on college students, the program expanded to high school students during the pandemic to provide an opportunity to experience new countries.  The program’s goal to provide an engaging experience and change in perspective motivated Compton to attend.

“I once did a rain cleanse by myself, where I sat out in the rain for a good half an hour and just let the rain fall on to me.”

Compton, who returned to Palo Alto after two months, resided on a campus with four bungalows and a farm alongside 10 other teens and seven staff members largely from the United States. The area is located on Cloud Forest Reserve, a protected forest with high biodiversity, heavy rainfall and a persistent sheet of clouds.

“There’s a lot of wildlife too, like different insects and beautiful hummingbirds that we get to see every day,” Compton said. “I once did a rain cleanse by myself, where I sat out in the rain for a good half an hour and just let the rain fall on to me, and that was pretty cool.”

As Costa Rica is only one hour ahead of California and the CIS campus has a stable internet connection, Compton says it wasn’t difficult to adjust to attending school, and he was even able to sleep in another hour in the morning due to the time difference. He didn’t need any accommodations in his classes, except for AP 3-D Art and Design.

“I’m doing independent work in my art class because I don’t have clay or different supplies that I would regularly have at home,” Compton said. “One of my plans [was] to paint the side of a building as one of my projects.”

A significant difficulty of studying abroad is missing family and friends back home;  however, Compton did not find this to be an issue.

“I call my family every single day when I’m here, just to see how they’re doing and connect with them,” Compton said.

Compton had intended to take a gap year since before the pandemic, and still holds out hope that he will be able to do that.

“I want to gain way more experiences before I really start studying,” Compton said. “I’m probably going to be traveling in Europe, but I’m also thinking of maybe coming back here to CIS Costa Rica and staying here — working on the farm and all that. They even just had a new baby cow, who we get to take care of. Everybody is super, super welcoming, and it’s a really great place here.”

Our gap in knowledge: We can’t learn everything from school