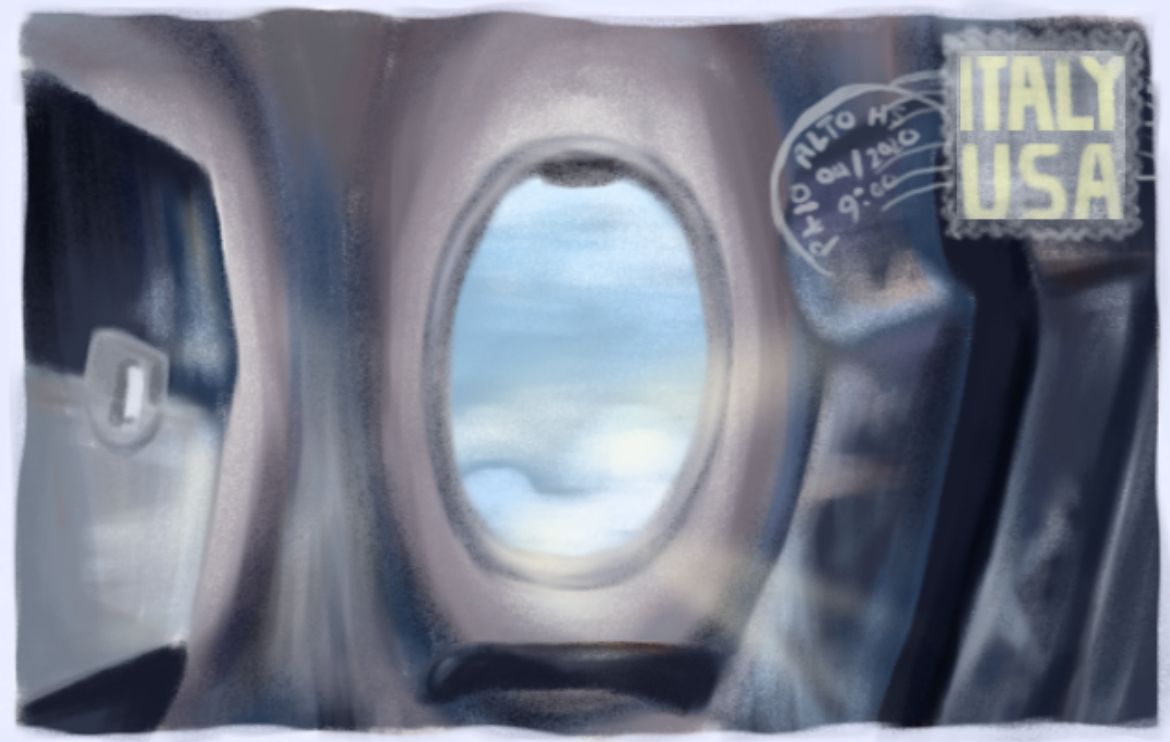 THE VIEW FROM THE WINDOW – When their senior year was cut short, Palo Alto High School exchange students Vanessa Zenelhoxha and Marco Simeone flew home to Italy. “At the airport in Italy, our temperature was checked and we were asked by a policeman about our plans once we would have gotten home,” Simeone said. Art by Xiaohan Li

Red-eye flights and globs of hand sanitizer, sleep deprivation and globetrotting travel plans. These have been the experiences of exchange students trying to make their way home after their study abroad experience was cut short as a result of the novel coronavirus. Palo Alto High School seniors Vanessa Zenelhoxha and Marco Simeone experienced two weeks of uncertainty after Paly closed its doors, before they were informed by their travel programs that they would be flying back to Italy. Verde reached out to these seniors and documented their travel experiences from Palo Alto to Italy.

For Vanessa Zenelhoxha, along with hundreds of other Palo Alto High School students, her time at Paly ended abruptly with the announcement of campus closure on March 13. In anticipation of Paly soon being shut down, Zenelhoxha, an Italian exchange student who has been attending Paly for her senior year, skipped the second half of the day to visit San Francisco. She consequently missed the frenetic buzz that went around campus when the decision was officially made.

“Everything happened so fast that I didn’t even realize it,” Zenelhoxha said.

She was at home with her host family when she heard that Paly had closed down for the foreseeable future. Four days later, she received an email from her exchange program saying that she was going back to Italy.

“Everything happened so fast that I didn’t even realize it.”

In the emotional moment in which Zenelhoxha told her host mom, Amy Hald, that she had to leave, Hald reassured Zenelhoxha.

“She was like, you know, that bedroom will always be your bedroom in our house and you always be like a daughter for us,” Zenelhoxha said. On March 26, Zenelhoxha left for the airport.

The United States branch of the American Field Service, the international youth exchange program that had facilitated Zenelhoxha’s study abroad experience, coordinated the travel plans of hundreds of students from around the country. Zenelhoxha and others from her area would meet in San Francisco and fly to Chicago to meet up with the larger AFS group before departing for their respective countries.

Due to mounting travel restrictions, the airport terminal in San Francisco was practically empty. Clutching masks and hand sanitizer, the AFS students felt the giddy rush that burgeons in large groups of teens with minimal supervision.

“In the airport, we were singing the Italian national anthem and a lot of people were just standing and looking at us like, ‘Oh, they’re Italian, maybe they have corona,’” Zenelhoxha said.

Once the students landed in Rome, the increase in protocols surrounding virus safety was immediately apparent. While Zenelhoxha was traveling in the U.S., she frequently saw people who were being cavalier about social distancing. In Italy, everyone wore masks and were much more serious about adhering to health guidelines.

When she arrived at her home in Reggio Emilia, Zenelhoxha self-quarantined for two weeks in her bedroom. She used that time to study for exams she will have to take to resume her education in Italy. She will be entering her fifth and final year of Upper secondary education,  which is roughly equivalent to the last year of high school in the States.

When not cramming for tests, Zenelhoxha has taken the time to reflect on her experiences in Palo Alto.

“I really felt free, I felt no one was judging me,” Zenelhoxha said. “It’s something that I really appreciate, because here [Italy] it’s so different. I’ll miss that a lot.”

Although the news of school shutting down was an unusual experience for every Paly student, it was especially strange for senior Marco Simeone, who was completing his high school education in Palo Alto, over 6,000 miles away from his hometown of Martina Franca, Italy. Two weeks after the school closures in Santa Clara County were announced, Simeone traveled from San Jose to New York City for a layover, then took another flight to Rome, and from there returned to his hometown by bus. The entire trip was a two-day event and along the way he was met with various precautions instilled by the coronavirus outbreak.

“At the airport in Italy, our temperature was checked and we were asked by a policeman about our plans once we would have gotten home,” Simeone said.

Not only was he met by airport safety control, but he was also met with his family.

“I couldn’t hug them as soon as I saw them because of the necessary precautions we had to respect especially at the airport,” Simeone said. “But once at home, after a long shower, I could hug them. It was certainly an emotional moment.”

After having his experience cut short at Paly, Simeone was subject to the uncertainties of online school in Italy.

“In Italy, I was reinstated with my classmates in my original class,” Simeone said. “There’s no difference between the regular learning at school and the learning from home. Teachers have been assigning and making us take the same number of tests they’re used to, so it doesn’t change much but the location.”

Simeone says his time in America was the greatest experience of his life. He was able to see the differences between the American and Italian school system.

“I’m really grateful about the way this journey developed, and even if it lasted two months less than what was planned, I couldn’t be happier.”

“I think that the education system in the U.S. helps the students a bit more in order to help them achieve whatever they want to do by not rushing their process,” Simeone said. “In Italy, we are more helped by our parents and our connections than by the school system.”

Simeone learned life-long lessons from his exchange year at Paly, and his experience exceeded the expectations he had of an American school at the beginning of the year.

“Experiencing a different lifestyle makes you understand how other people live, makes you clear your mind of all the prejudices you might have concerning something or someone and makes you think twice before acting in a certain way,” Simeone said. “I’m really grateful about the way this journey developed, and even if it lasted two months less than what was planned, I couldn’t be happier.”

Editors’ note: Source Vanessa Zenelhoxha’s last name was misspelled in a previous version of this article and has since been corrected. Verde Magazine regrets this error and any confusion it may have caused. All story corrections can be found under the ‘Corrected Stories’ tab.

A whole new world: Hosting an exchange student can be its own adventure