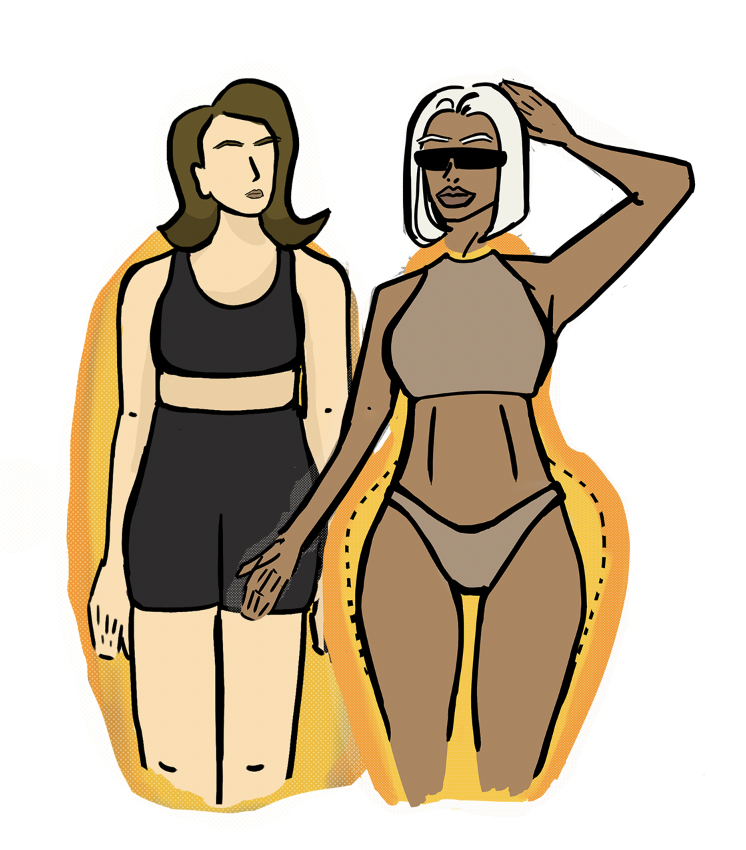 Opinion: Would you get a BBL?: big butts, cheugyness, society and unattainable images

Has anyone noticed that Kim Kardashian’s butt has gotten smaller recently? Because I have.

A little backstory for those who don’t know: Since their hit reality TV show “Keeping Up with the Kardashians” aired in 2007, the Kardashian’s bodies have been frequently featured in celebrity magazines. This brought in “new curvaceous body ideas” according to a CNN Health article titled “The history of the ‘ideal’ woman and where that has left us.”

The Kardashian clan have proudly showed off their unnaturally proportioned waists and behinds to the world ever since.

Their rise in popularity shifted the then-current “ideal body shape” of the 90s from the skinny “heroin chic” to the curvy Kim Kardashian look; out were the washboard abs and thigh gaps that had once ruled Tumblr, and in were the large behinds and a small waists.

According to a 2017 report by the Aesthetic Surgery Education and Research Foundation, one to two out of 6,000 BBLs resulted in death.

The “heroin chic” body was only attainable for certain women with a specific genetic makeup.

Although simply loving your curves seemed attainable for many, what was captivating about this new body image portrayed in the media was the almost unnatural hip-to-waist ratio.

This led some to seek out surgery to gain a body shape similar to the Kardashian sisters, more specifically, Brazilian butt lifts — more commonly known as BBLs.

This enhancement doesn’t come without risk, however. The BBL has the highest death rate of all cosmetic procedures, according to the American Society of Plastic Surgeons. According to a 2017 report by the Aesthetic Surgery Education and Research Foundation, one to two out of 6,000 BBLs resulted in death.

Despite the risk, people are still seeking butt enhancements. According to Business Insider, from 2015 to 2019, the percentage of BBLs performed increased by 90.3% with over 40,000 BBLs completed in 2019. The surgery also became more accessible to the average American: The average cost of a BBL dropped from $5,507 in 2018 to $3,329 in 2020, according to the same Business Insider report.

So, why are the Kardashian’s butts now getting smaller?

I think celebrities and other affluent people feel that too many people are spending massive amounts of their income to attain something that could be easily obtained by affluent people and need to constantly be hopping from one unobtainable thing to the next. How were the Kardashians going to cope with normies (like us) having the same body type as them?

The simple rise and fall of the Gucci belt shows how something once unattainable and unknown by the general public can become attainable for the average person and therefore fall out of favor — or cheugy.

Have you ever heard of the word cheugy? According to The New York Times, cheugy describes “someone who is out of date or trying too hard.” Dubbed by Hallie Cain on Tik Tok in 2021, she lists the Gucci belt as one of these items of clothing that can make someone cheugy.

So how did a simple luxury designer belt become synonymous with minion memes, pumpkin spice lattes and home decor found at Target? Simply put, too many “ordinary” people had the ability to purchase it. Most of the people during this time with enough extra money to spend on an almost $500 belt were these “girlboss millennials.”

The simple rise and fall of the Gucci belt shows how something once unattainable and unknown by the general public can become attainable for the average person and therefore fall out of favor — or cheugy.

Back to Kim Kardashian and her (now deflating) butt.

On Aug. 3, Kim Kardashian shared a body scan with her 327 million Instagram followers showing that her body fat percentage had gone down from 25% to 18.8% in the past year alone.

Personally, I think that her butt has gotten smaller, not that I spend a lot of time looking at butts — you can go take a look for yourself.

Regular people save up and spend massive amounts of income in order to purchase things that are easily accessible to influential people, which makes them feel ordinary. This causes them to quickly get rid of, deny the existence of and then obtain the next ideally unattainable thing.

Us “peasants” shouldn’t drain our bank accounts to get something that celebrities temporarily have. They will never allow having similarities to us and you will always be wasting money on things you can’t grasp. Save your money and ignore them.