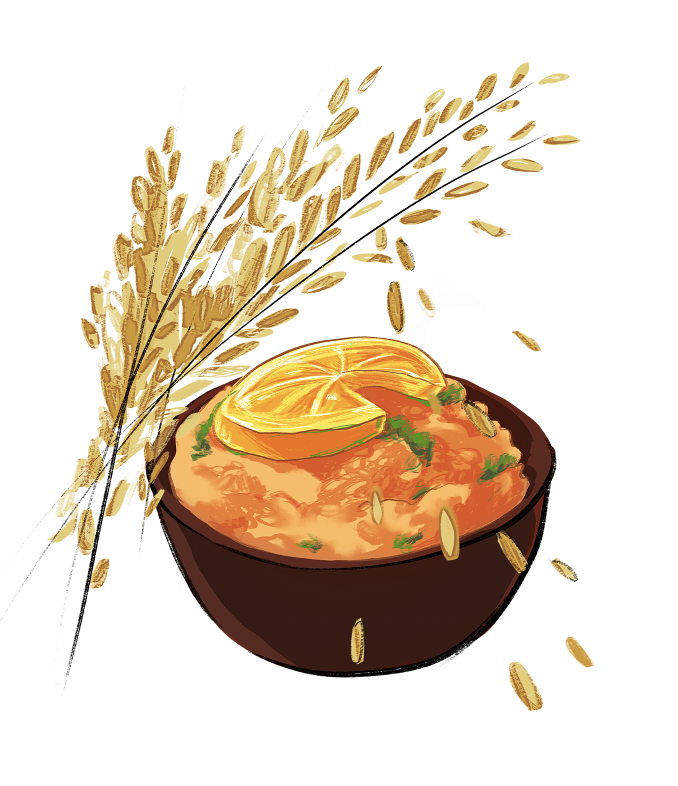 In Chinese, if you say you’re going to eat dinner, in a literal translation, you say that you are going to eat rice — or 饭. Rice is an essential part of Chinese culture and growing up, rice made an appearance at every meal I ate. Only recently did I notice that it was a staple for many other cultures as well, even if, in their dishes, the rice was almost unrecognizable to me.

I always ate rice with a spoon, occasionally with chopsticks or a fork, but never without utensils — until very recently. Sitting at an Indian restaurant with my friends, I was eager to try something new and fortunately my friend was willing to share some of her culture with us. We ordered chicken biryani, a dish served in a small metal bowl filled with basmati rice tinged yellow from a variety of spices, and succulent pieces of roasted chicken.

Once I got a portion on my plate, I was instructed to keep my left hand clean and handle food only with my right. Watching my friend carefully, I made a quarter sized mound of rice, picked it up with four of my fingers and then, using my thumb, pushed it into my mouth.

My first attempt was quite laughable — only a few grains of rice actually arrived in my mouth.

Rice cooked in different manners and with different spices create entirely different dishes, but they are bound together by a common grain.

Despite this challenge, I had tried something that many people do on a daily basis and this feeling of curiosity of other cultures only expanded. I felt refreshed after eating the same grain I had consumed my prior 17 years of existence in a new way. Previously, my friends’ and my consumption of the same grain was different in the way that we used to eat it. Now that I had the ability to eat rice in the same way as her, I felt closer to her.

Deep down, I realized, we are all the same, but there are small exterior differences that can cause rifts between people. Rice cooked in different manners and with different spices create entirely different dishes, but they are bound together by a common grain.

In my adventures scavenging the Palo Alto High School student population, hoping that one person would say anything of value about rice, I received many rather dry responses such as, “Yeah, I eat it like three times a week,” “Rice is rice,” or “That’s also a track and field acronym.” In these deep, dark moments of borderline despair, I remember something I saw in a certain someone’s Instagram bio. Several years prior, I recalled seeing someone labeled “rice enthusiast.” In these desperate times, he seemed like my lord and savior.

Most of us have something in common — we all eat rice. Something so mundane as a grain, has such power to unite a community.

I spoke with junior Jonathan Chen, seemingly the only person who mirrored my enthusiasm. Chen has been a self-proclaimed “rice enthusiast” for the past four years. When asked about the origins of this label, he simply stated that it was because he had previously seen rice as something that only Asians ate, but he no longer feels this way.

Most of us have something in common — we all eat rice. Something so mundane as a grain, has such power to unite a community. It’s almost comforting to try new foods and find similarities between them and the food of my own culture. In such polarizing times like these where many try to break communities apart, it’s good to know that there’s something that can bring us together at the same dinner table.