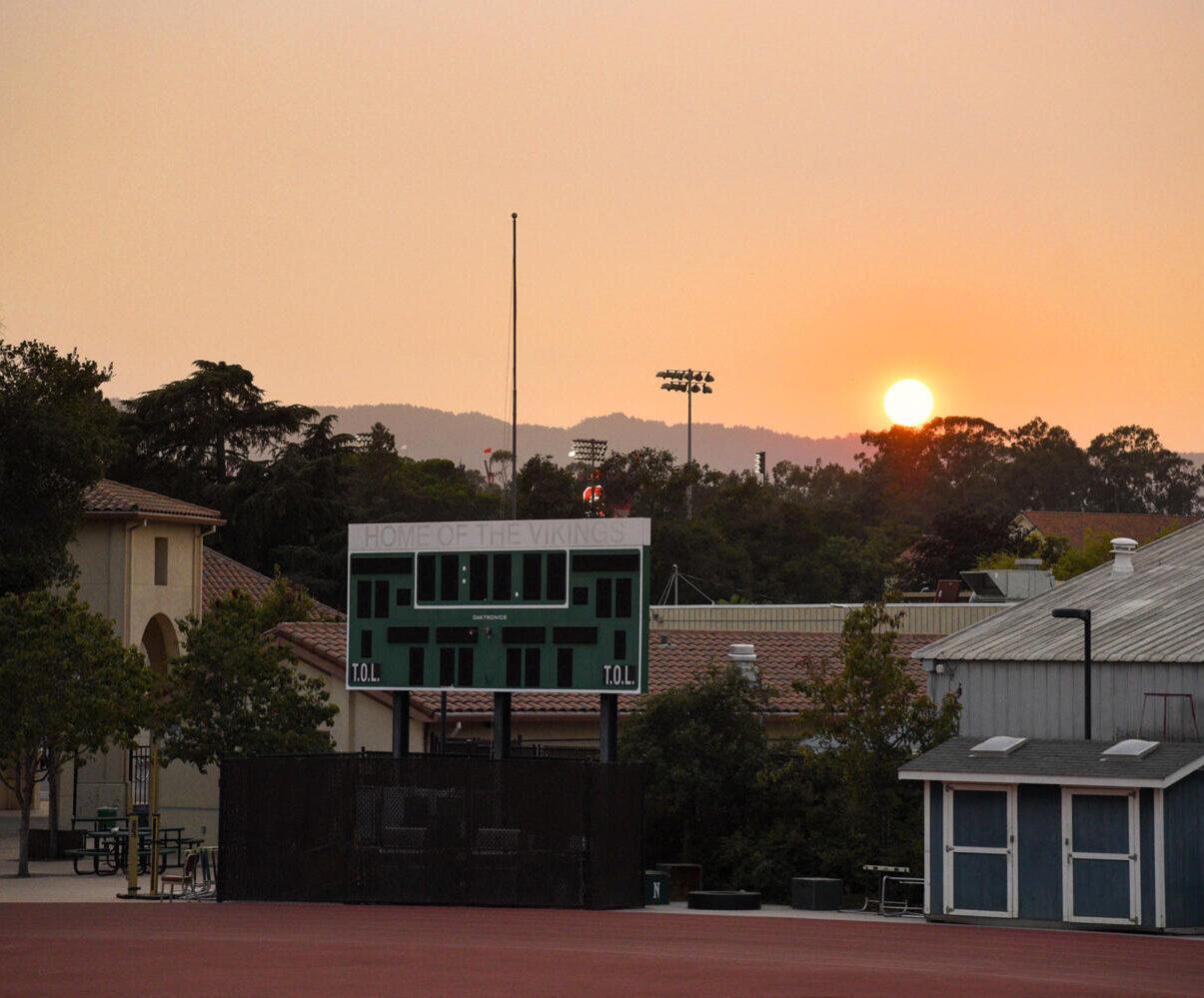 SMOKY SKIES — The bright orange sun sets over Viking Stadium under a hazy sky. Though hundreds of miles away, the recent Norcal fires have extended their reach to Palo Alto. “The smoke travels so far that everyone is affected by it,” junior Finley Craig said. Photo: Emily Yao

Lost in the flames: Fires’ impact on our community’s psyche

Senior Maia Johnsson recalls how she was sitting at her dining table, scrolling through her phone, when her mom approached her with alarming news — fires in Lake Tahoe were steadily making their way toward her family friend’s home.

“It was hard for me to comprehend what was going on, because it hit so close to home,” Johnsson said. “I was quite taken aback.”

Whether there’s smoke in the sky or yet another social media infographic, students are always reminded of the constant stream of ongoing tragedies. Many have found themselves stuck in a frustrating position — feeling the psychological burden of their inability to change the unfortunate situation that seems so close, yet so far. 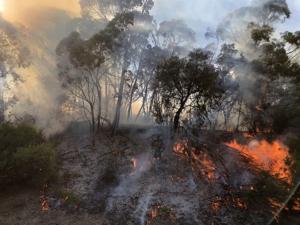 RAGING FLAMES — A blazing Daly City wildfire scorches the surrounding brush. Recent wildfires have caused much anxiety to the members of the local community. “The wildfires are getting worse and they are becoming more frequent,” junior Ella Rosenblum said. “I think that is a concern to everyone.” Photo: Kyla Schwarzbach

The great exposure to tragedies through social media leads to questions about the possible long-term impacts on students, especially a buildup of stress and sadness. According to a recent BBC survey of young people worldwide, two-thirds of participants reported experiencing sadness, fear and anxiety concerning the issue of climate change. Additionally, 91.2% of Paly students think abundant exposure to tragedies like natural disasters through social media has affected their generation’s psyche, according to an opt-in survey by Verde Magazine of 248 Palo Alto High School students conducted Sept. 13 to Sept. 16 via a digital form published on Schoology pages and Verde social media.

From a psychological standpoint, AP Psychology teacher Melinda Mattes said she is unsure how this constant exposure to tragedies will affect teens long-term.

“It [exposure to tragedies] can be motivating,” Mattes said. “Or it can be pretty demoralizing, and you can come to just accept that’s the way it is.”

According to Mattes, while some may use this exposure to fuel change, others may lack the motivation to create change.

“Even though the fire is so far, it feels so close, because the smoke is everywhere.”

Mattes also expressed concern for how difficult it must be to see the world through the polarity of social media.

“On social media … everything is very extreme,” Mattes said. “And if that’s the information you’re taking in then you start to view the world that way which I have to imagine can be hard.”

However, Mattes said she keeps an optimistic outlook on this generation’s future, comparing it to times before social media use was widespread. She said she hopes students who use social media will be more inclined to advocate for issues such as climate change.

“When I was in high school, we would kind of talk about the environment, but … it wasn’t important because we didn’t really see many reasons,” Mattes said. “But now, you see reason after reason, day after day.”

While more students may be more driven to advocate for climate change solutions in the future, some, such as senior Siddhant Amberkar, are currently figuring out how to live in an age when scrolling past tragic news is a common and daily occurrence.

“In a sense [it’s] desensitizing because there’s nothing you can do about it,” Amberkar said. “So at a point you kinda just have to ignore it and just live on with your life.”

Despite Palo Alto’s physical distance from major wildfires, residents are still impacted by them in various ways. Amberkar hiked in the Big Basin redwoods just two weeks before wildfires burned a considerable portion of them to the ground in 2020.

“That [the Big Basin fires] is pretty devastating especially because these are a lot of the wonders of California … that are being destroyed from the fires,” Amberkar said.

“You always hear about natural disasters and natural causes destroying people’s lives but now it’s people that we know, places that we’ve been to … it just hits really close to home.”

Students like Amberkar have felt trapped while helplessly watching the fires enclose on familiar locations as a constant stream of new reports or fire containment updates crowd their social media feeds, rendering these tragedies inescapable.

“When it happens, you think of what can you do — and it’s not like you can stop the fire yourself,” Amberkar said.

For junior Finley Craig, this fall’s smoky skies were a scary reminder of the protrusive presence of the seemingly distant fires.

“Even though the fire is so far, it feels so close, because the smoke is everywhere,” Craig said.

Forest fires have decimated locations more personal to Craig this year than in years prior.

“When I was in high school, we would kind of talk about the environment, but … it wasn’t important because we didn’t really see many reasons. But now, you see reason after reason, day after day.”

Being the place where her parents first met and got married, Lake Tahoe holds a special significance to Craig and her family.

“When it [the fire] gets closer to Tahoe, it feels close to home,” Craig said. “I know all of these forests that, now, my picture of them is different than what they look like because they’re now all charred.”

With the quickly changing landscape, Johnsson said she is worried about possibly being unable to recognize familiar places she used to love, despite how often she has visited them over the years.

Because of this, Johnsson said this year’s Tahoe fires have impacted her on a more personal level than fire seasons in years prior.

“You always hear about natural disasters and natural causes destroying people’s lives but now it’s people that we know, places that we’ve been to … it just hits really close to home,” Johnsson said.