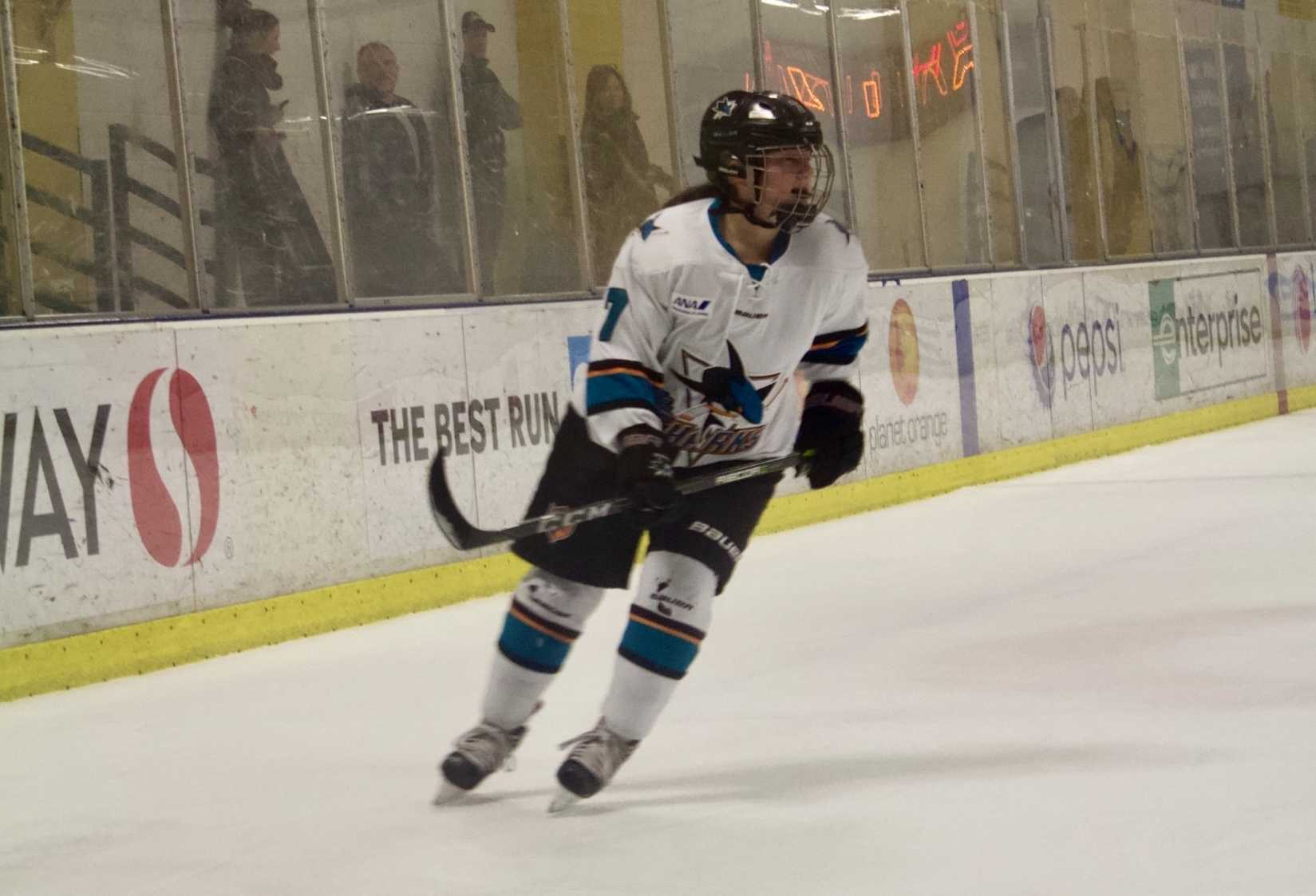 SPEEDY SKATING Palo Alto High School senior Jessie Arons plays for the Junior Sharks in an intense hockey game at a rink in Fremont. The game was challenging but Arons keeps her mindset positive. "I try focusing on the game, and I try not to worry about other things," Arons says. Photos by Mia Baldonado

It’s a typical Saturday evening at Solar4America Ice in Fremont. The growl of blades on ice echoes through the spacious rink, accompanied by shouts from surrounding spectators. Parents stand stiffly on the freezing bleachers, fighting the cold with puffer jackets and layers, not even flinching when players slam into the plexiglass walls directly in front of them.

Jessie Arons is a Palo Alto High School senior and a long-time ice hockey player for the San Jose Junior Sharks team. Introduced to the ice by her hockey-fanatic mom, Arons began with skating lessons at the age of four before transitioning to ice hockey at the age of six.

“The year before last, I would go help her [Aron’s Mom] coach, but now it’s busy — it’s hard to go,” Arons said. “Years ago, we went to do this hockey camp together in Colorado, which was really fun. And every once in awhile, we’ll do a scrimmage together.”

Her mom’s love of hockey transferred to Arons, encouraging her to continue the sport even though ice hockey is relatively uncommon among high school students in California. Up until age 14, Arons played on a co-ed team, but as the sport became more competitive, the teams divided by gender.

“When you get older, the boys get really big and so it’s harder to play against them,” Arons said.

Unfortunately, Bay Area girls’ ice hockey teams are scarce: the next closest team to Arons is located in Los Angeles. Including Arons’s team, there are a total of six girls’ and womens’ ice hockey teams in California. This has led to many long car rides, both to weekly practices in San Jose and far-away games. Each year, Arons estimates that she attends six or seven tournaments. In 2019, this included locations such as Boston, Chicago and Wisconsin.

“On the East Coast there’s high school girls teams and there’s a million rinks, but at the same time, it’s cool to play here because it’s really unique.”

While playing hockey in the Bay Area has its unique challenges, from the commute to rink accessibility, its lack of popularity makes Arons a one of a kind.

“On the East Coast there’s high school girls teams and there’s a million rinks, but at the same time, it’s cool to play here because it’s really unique,” Arons said.

The limited size of the hockey community in general, which is reinforced by the long hours that the team spends together, has established special bonds among players. Arons refers to her teammates as her second family.

These connections extend past the team, as Arons and her fellow players reach out to the broader community. At least once a year, the team participates in a one-day event called “Girls Give Hockey-a-Try,” in which each player is assigned to coach an elementary school girl interested in the sport. If they like it, they can officially try out for the Junior Sharks team. 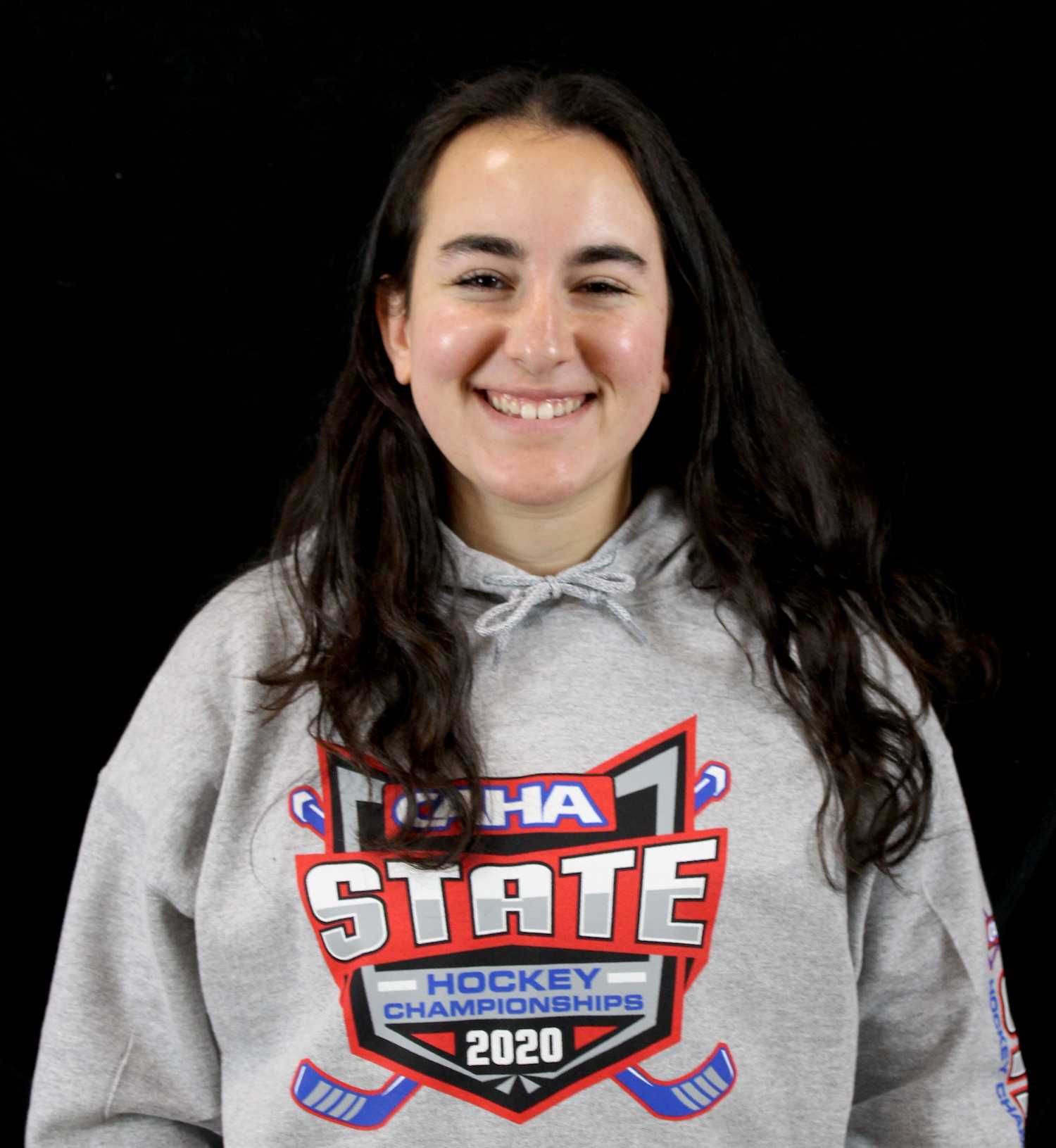 HOCKEY WINS Jessie Arons, a Palo Alto High School senior, won the California Amateur Hockey Association state championship with her team, and reflects on the amazing, rewarding experience. “For me it’s not just scoring yourself but like helping your teammates to achieve too,” Arons said. “I really like that, like the team sport aspect of it.”

“The little girls are so sweet and cute and just helping them learn how to play … it’s just fun,” Arons said. “You’re out there with your other teammates too, and everyone’s helping this tiny little girl skate around.”

Arons’s teammates and the memories she made helped her persevere through times of struggle. During her first season of Paly field hockey, Arons tore her ACL, forcing her to stay off the field and the ice for six months. Arons’s commitment to hockey was tested, but her love for the sport prevailed, as she made it back in her skates this season.

Despite her struggles, Arons never lost sight of her goals. Ever since she started playing seriously, collegiate ice hockey has always been an ambition of hers. As of January, Arons has committed to Lawrence University, where she will pursue ice hockey on the Division 3 women’s team.

“I’ve just been playing [ice hockey] for so long; it’s a big part of my life,” Arons said. “It’s weird to think of me not doing it.”

New team on the ice: An outlet for Palo Alto hockey players