The theater on ice team practices their edging at a 7 a.m. in San Mateo. Photo by Maraleis Sinton.

As the sun starts to rise in the early morning sky, we open the glass doors into the San Mateo Bridgepoint Ice Rink and a rush of cold air sweeps onto our faces. Skaters, dressed in jet black leotards, spin in graceful circles to the slow melody of “The Prayer” by Celine Dion. Beyond the rink walls, parents sit back, many wearing boots or slippers to stay warm. Bagels, fruits and muffins sit on a nearby table, waiting for the skaters to return from their morning class. A coach’s voice echoes through the building as his arms direct a team of skaters. Among them, two local students blend into the beautifully synchronized crowd.

Twins and Palo Alto High School sophomores Bella and Heather Davies were just five years old when they first tied up their skates and ventured onto the ice. From birthday parties at Winter Lodge to a third place victory in the Nations’ Cup International Competition, the Davies twins have fallen in love with the sport.

“Sometimes when you don’t land jumps, or it’s taking a long time, you feel like ‘I’m never going to land this, it’s impossible… maybe I should just quit,’” Heather says. “But then when you do land the jump, it’s worth it because it’s so satisfying.”

“Sometimes when you don’t land jumps, or it’s taking a long time, you feel like ‘I’m never going to land this, it’s impossible… maybe I should just quit.’ But then when you do land the jump, it’s worth it because it’s so satisfying.”

While some consider ice skating to be a calm wintertime activity, competitive figure skating is far from relaxing. The sport demands year-long physical and mental perseverance. The Davies twins are part of a team that specializes in theater on ice, a subset of figure skating that utilizes sets, music and costumes to tell a story.

“It’s a great division of skating because you really get to support each other,” says San Fransisco Ice Theater coach Louis Vachon. “Competing singles is quite challenging [because it has] triple jumps, so this [theater on ice] gives an outlet for skaters that can’t do all these hard jumps, but are loving skating and still want to do it.”

Just like any other sport, the team has traditions that bring them together.

“Before we get onto the ice, we always rub our coach’s bald head — he has a lucky head and every time we do that, we get on the podium,” Bella says.

The misconception that ice skating is “not a real sport” frustrates the twins, and they hope that people will come 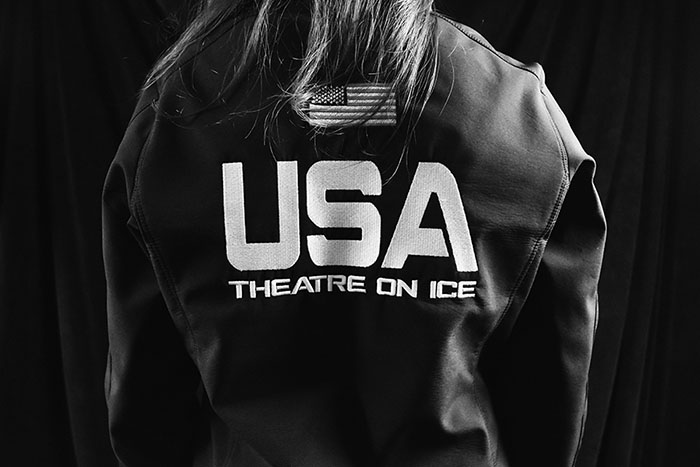 to appreciate the stamina and technique it requires.

Between practices at the rink and cross-training at home, the sisters are fully dedicated to improving their performance.

“We wore weights around our ankles around the house to make our legs stronger,” Bella says.

Through skating, the twins have gained confidence and perseverance that they plan to carry with them in the future.

“They’re both a little bit on the shy side, and I have really seen them both open up and become more outgoing performers with the team,” Vachon says.

The assistant coach, Paige Scott, recalls the time when Bella and Heather blossomed while working on a show as the lead roles.

“The story revolved around these two girls, and it was difficult to get them to smile, to show the act of surprise and wonder,” Scott says. “It was a constant push. But then the day of the performance, out comes this inner actress. They really brought their characters to life.” 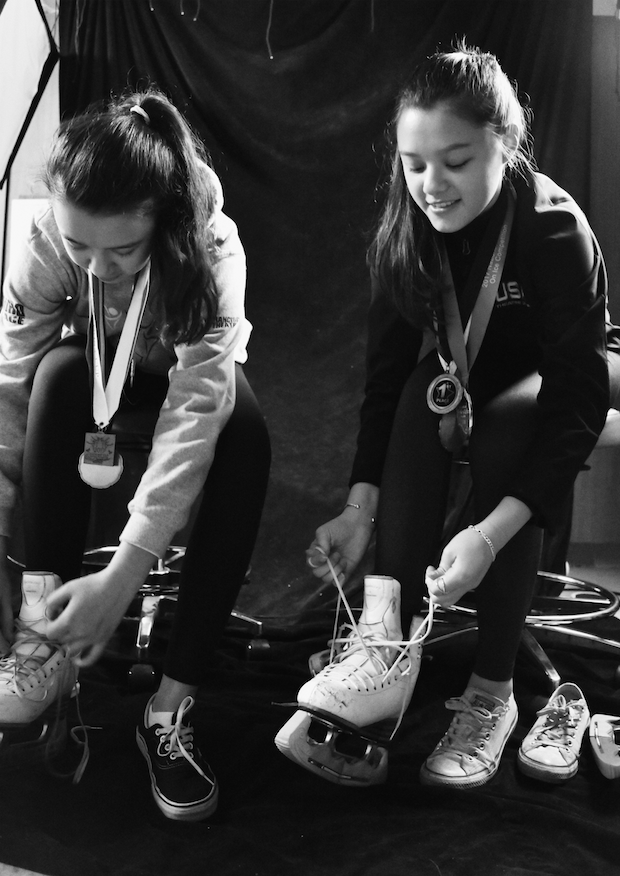 As a member of Team USA, Bella wears the team jacket with USA Theatre on Ice’ sewn into the fabric. Photo by Maraleis Sinton.

The countless hours that Bella and Heather have spent together on the ice have brought them even closer than they were before they started skating together. Their sense of competition and support for one another has strengthened their relationship.

“We watch each other during practice and give each other tips,” Bella says. “We keep each other going.”

With the ambitious goal of defending the team’s national title and reaching the world stage this upcoming season, Heather and Bella have a lot of work to do, and they continue to train with intensity and passion every day. As a warm smile spreads across her face at the thought of skating, Heather says, “I don’t want to ever stop.”

From the five years that Bella and Heather have spent with the San Francisco Ice Theatre,  they have gained a different perspective on teamwork and commitment as athletes and as individuals.

“We’ve learned what it means to work hard in order to achieve [our] goals,”Bella says. “It has brought us many friends who’ve helped us become better skaters and better people through ice skating.”