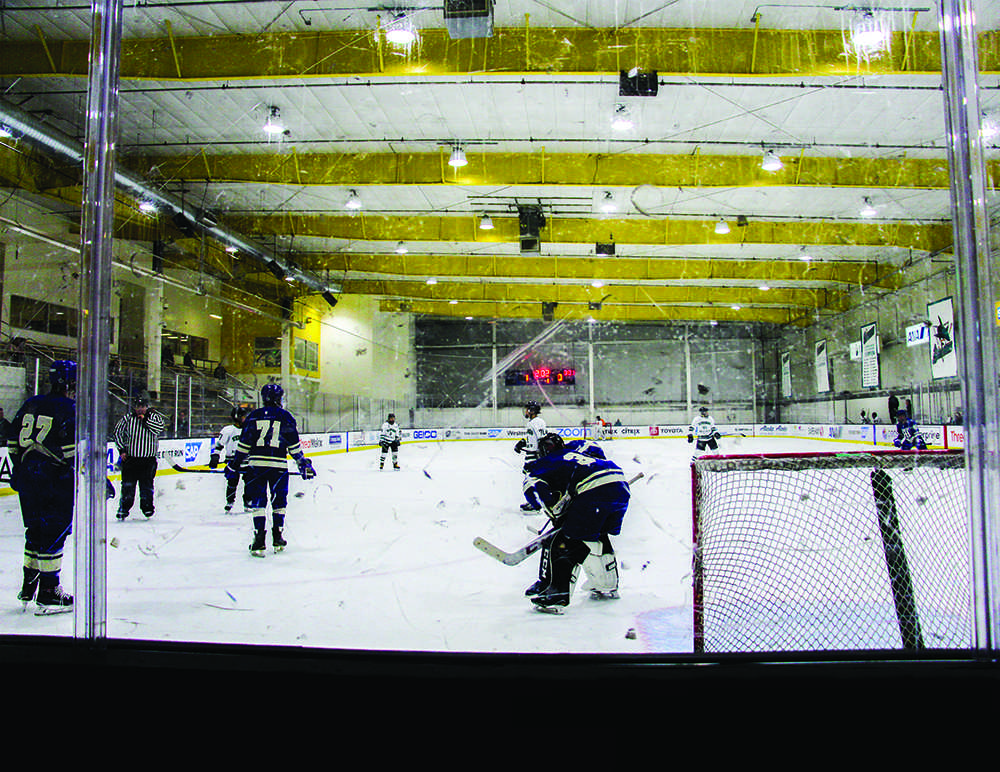 New Team On The Ice: An Outlet For Palo Alto Hockey Players

The sound of enthusiastic tapping fills the air as the pomp of the national anthem draws to a close. As fans take their seats, the starting five players from the Palo Alto Vikings and Tahoe Prep glide across the ice to their positions. The few remaining Vikings sit down on the bench, while the Tahoe Prep players cram into theirs.

The game against Tahoe Prep is tough — the Vikings are outnumbered and under-equipped, which makes it all the more thrilling for head coach Craig Janik when the team ultimately wins. As he congratulates the players and celebrates with their parents, he can’t help but contain his smile.

“Our guys had to play very smart and very efficient to be able to play a solid three periods,” Craig says.

With only 14 players on the roster, the team struggles to field enough players for the games, leading to fewer options for substitutions and longer playing time for those on the ice. Recruiting new players is also a challenge, since the team isn’t officially sanctioned by Paly. However, the hardest step — getting the team started — is already over.

The makings of a team

The idea of an ice hockey team in Palo Alto is pretty unusual, as the California climate does not freeze local bodies of water and there aren’t many ice rinks in the area. However, for founding student and junior Stanley “Stosh” Janik, this was not a deterrent.

“The team started as a mutual idea between my father and I,” Stosh says. “I’ve played hockey for almost half my life and was introduced to hockey by my father, who is an enthusiastic advocate for the sport.”

Since ice hockey is not part of the California Interscholastic Federation, the governing body for high school athletics, teams are rarely recognized as school-sanctioned varsity sports. As a result, the hockey team was not approved as a school sport by the Paly administration. So, the team joined the Sharks High School Hockey League.

Though the team is technically considered as a stand-alone entity, they still feel like full-fledged members of the Paly sports community.

“The players all consider themselves representing Palo Alto High School even though it’s not any kind of official thing,” Craig says. “But in their head that’s how they think about it.”

The next major hurdle they faced happened before the team was even created: they had to be able to field a team. Though they succeeded this season, a 14-player team is relatively small and it is unclear how they will fare next season. Seven team members are freshmen, three are seniors and the goalie is a homeschooled student provided by the league.

“We have a very, very skilled team, but we just have a small team,” Coach Craig says. 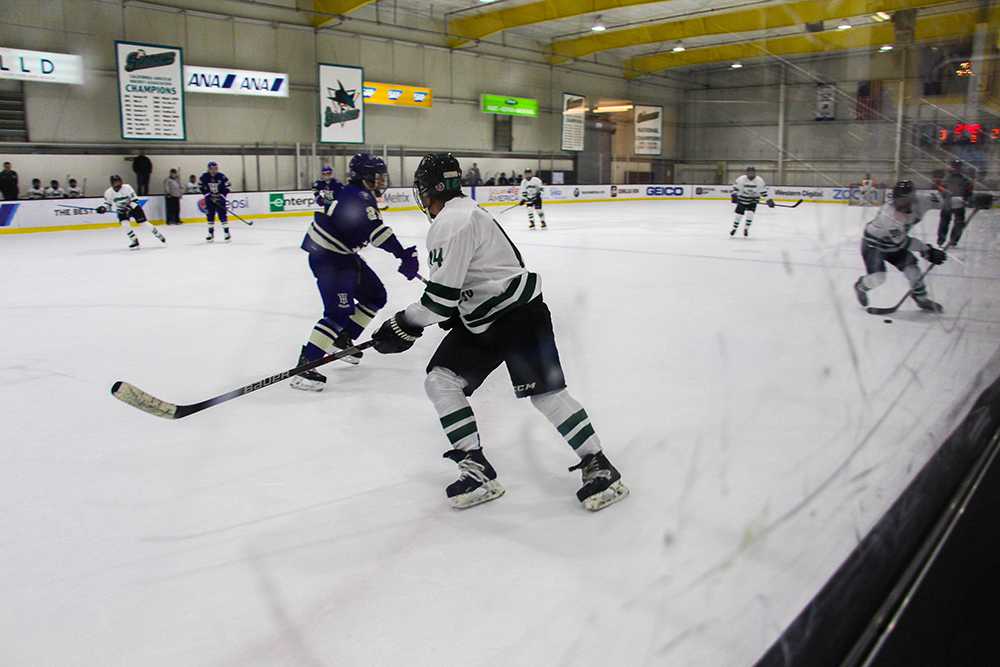 Senior Ethan Geller skates inside as senior Anthony Georgiadis carries the puck into the attacking zone.

The hockey team opened the season with an emphatic 9-2 victory against Pioneer High School in San Jose, followed by a tight loss to Willow Glen, a draw against Valley Christian and close losses to St. Francis and Los Gatos High School.

Spanning from October to March, the hockey season consists of 12 games. This season, the Vikings will play two games at the SAP center in San Jose, the arena used by the San Jose Sharks. The other 10 will take place at Solar4America Ice, an arena located near the SAP center.

“Playing at the SAP center is awesome, not just because of the quality of the stadium but also because we get to meet players for the [San Jose] Barracuda and watch the games afterward,” Stosh says. “It’s definitely a little intimidating to be in the professional-size rink, but I can usually shrug it off and play my best.”

The Vikings performed exceptionally well their first season as a team; but victories aside, their main goal has been to learn to play together as a team and on the ice.

“The season so far has been great,” Stosh says. “We’ve been holding our own in the league and winning fairly often … The games are fast, fun, clean and skilled.” 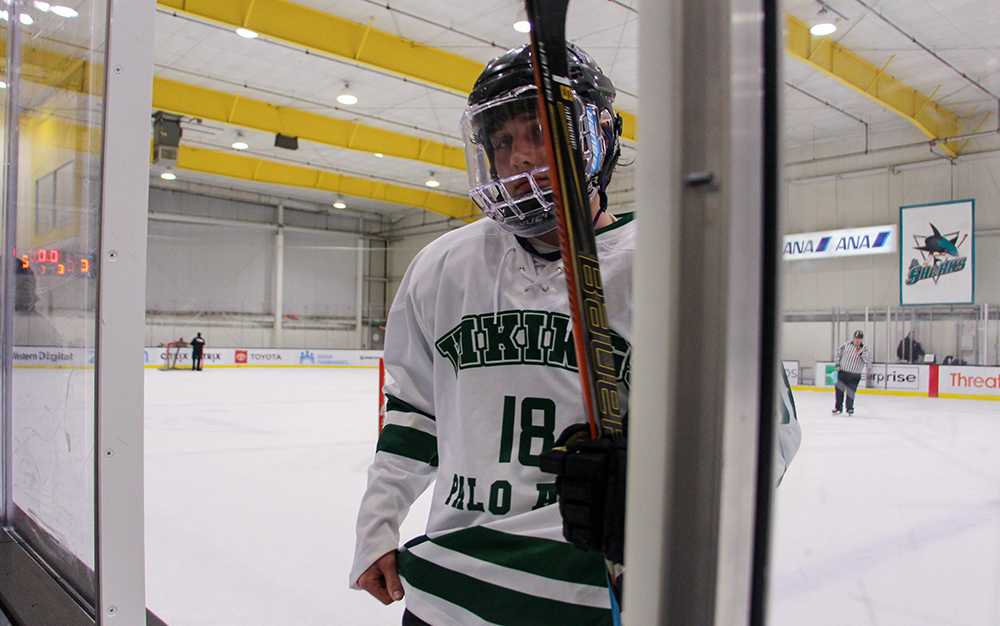 Sophomore Charlie Sullivan exits the ice after the Vikings’ 5-3 win against Tahoe Prep on Jan. 29.

Looking to the future

Despite its meteoric rise, the team’s future has yet to be determined, as only the National Hockey League can fully transform ice hockey into a varsity sport.

“These kids are incredibly dedicated to athletics, eating healthy, getting to practice, working out, getting their school work done and it’s a shame that it’s not treated as a varsity sport,” says Anthony Schweitzer, father of Benjamin Schweitzer, a freshman on the team.

Senior Anthony Georgiadis hadn’t played ice hockey since he moved from Chicago four years ago. When the team was created this year, he leapt at the opportunity to play again — varsity sport or not. It has been a successful season thus far, and Georgiadis has even higher hopes for the future.

“My assumption is that they’re [the team] going to get pretty good, especially by the time that all the freshmen are seniors,” Georgiadis says.

Craig is optimistic, especially about his short-term goal of making the play-offs and long-term goal of giving ice hockey players attending Paly the opportunity to play for their school. Schweitzer, too, wishes to see hockey become Paly-affiliated.

“High school hockey is a lot … more fun for the kids compared to club hockey, and school spirit is pretty important to them,” says Schweitzer. “So they get to play with a little more pride.”