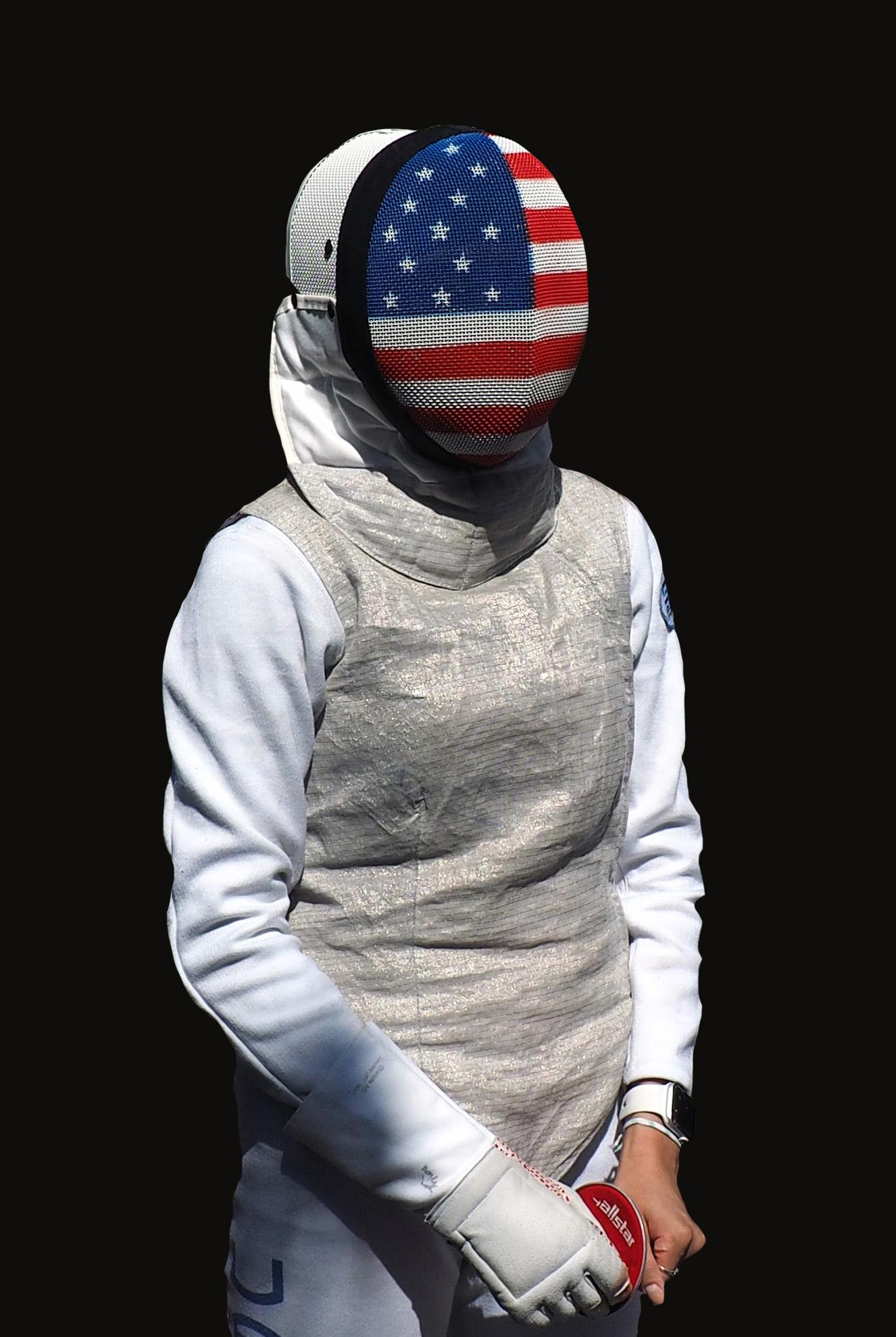 FIERY FENCING — Evelyn Cheng wears the U.S. fencing mask, which she received by becoming a member of the Cadet World Team. “It’s an honor to represent the USA at the World Championships, as it has always been one of my dreams,” Cheng said. Photo: Audrey Joachim

After a brief pause to size up her opponent, Palo Alto High School senior Evelyn Cheng launches forward. Her actions blur together as her speedy crossover footwork forces her opponent to the back end of the fencing strip. Her rival attempts to parry the attack, but Cheng disengages around her blade — within a mere second, Cheng strikes her opponent and the point is over.

This eight-second clip from the 2020 Fencing Junior Olympics displays a sliver of Cheng’s talents as a world-class fencer. She ranks eighth in the world for her age group and participates in both national and international competitions almost every month. In the past, she has traveled to places such as Manchester, England; Cabrières, France; Mödling, Austria; and Rome, Italy for fencing. However, due to COVID-19, Cheng is now unable to travel.

“I really miss the competitions — like once a month being able to travel to some random state in the U.S. and see my friends from other states and just competing with them,” Cheng said. “It would just be one weekend; I would just fly there, compete and then just fly back.”

Practices remain somewhat similar to what they were before COVID-19, as fencers already wear fencing masks and gloves while fencing, according to Cheng. Her club lets players practice in small groups during a three week period before rotating. However, practices carry less weight since there are no competitions to train for.

The most significant change brought about by COVID-19 affected Cheng’s future plans. Ever since her brother committed to Stanford University as a fencer, Cheng’s dream has been to follow in his footsteps.

“Now that I have won [the Junior Olympics], it just makes me think I can achieve more than what I previously thought I could.”

Her early commitment to recruitment to Stanford meant that she had to decline offers from other schools. However, Stanford decided to cut 11 varsity sports including fencing, due to recent financial difficulties. In spite of all of this, Cheng is excited about her future, as she recently committed to a different Division 1 school for fencing.

“It was just frustrating because I already turned down other Division 1 offers just so I could go to Stanford,” Cheng said. “But over time, I moved on from the situation, and I’m really grateful to be recruited by a different university.”

COVID-19 is just one of many challenges that have been thrown in Cheng’s path — her journey to fencing dominance took years of dedication and hard work, but also an unwavering belief in herself.

How it all began

Cheng began fencing in fifth grade when she wanted to join her older brother in the sport. She went to tournaments with the intention of supporting him instead of focusing on her own matches.

“I used to be his biggest cheerleader,” Cheng said. “When I was really bad I’d honestly just go to competitions and I’d be so happy to cheer for him.”

Her brother not only had a role in bringing her into the sport, but he also inspired her to perform better in competitions.

“A lot of people say that me and my brother fence really similar. So in terms of just fencing-wise and my style, he was a role model,” Cheng said. “And he got really good results and so I wanted to match up to that as well.”

According to Cheng, she initially struggled to keep up with the elite fencers in her class; however, her transition to Silicon Valley Fencing Center has drastically improved her skill in large part due to her new coach Aleksei Murugin.

After watching Cheng fence at the club, Murugin saw her fencing potential and promising style right away — he chose to coach her and has worked to foster her growth ever since.

“Initially it was her fencing style that caught my attention,” Murugin said. “I noticed her because of her dynamic footwork, blade work and a brave attitude. She was fun to watch.”

The two of them work together not only on Cheng’s techniques but also on the emotional aspect of the game, which she initially struggled with. Given that it is such a high-intensity sport, fencers must maintain their composure in order to achieve solid results. In moments where Cheng panics, Murugin helps to calm her nerves.

“He’s definitely my favorite one [coach] because he’s the most dedicated,” Cheng said. “He believed in me when no other coach did, and he put so much effort into helping me.”

Cheng made her way to the Junior Olympics last year, participating in the cadet women’s foil event and placing 66th. In February, Cheng won the national competition, earning her a spot on the world team and raising her national ranking from 22nd to third in her event.

“It felt really good because I’d never won a national competition,” Cheng said. “Last year at that event, I did really poorly so to get first the next year really shows how much I improved.

Looking forward, Cheng aspires to achieve greater levels of success. While she made the Cadet World Team, which is 17 and under, Cheng’s goal in the upcoming years is to make it to the Junior Team, which is 20 and under.

“Now that I have won [the Junior Olympics], it just makes me think I can achieve more than what I previously thought I could,” Cheng said.

Recruitment rescheduled: Junior athletes on the effects of the coronavirus pandemic

The Noyman brothers: Setting a high bar for intense athletes