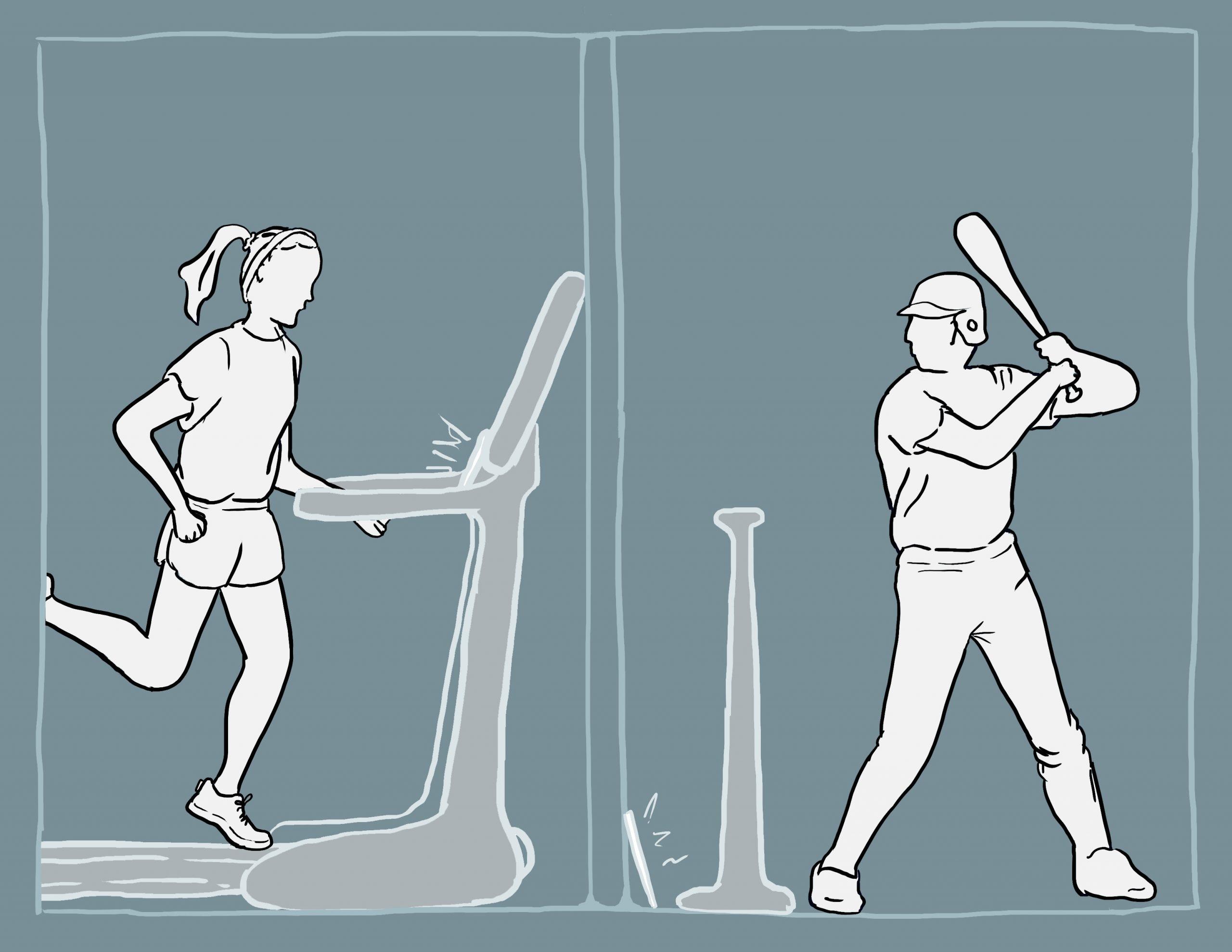 Recruitment rescheduled: Junior athletes on the effects of the coronavirus pandemic

When driving past Palo Alto High School on a typical spring afternoon, it is common to see the athletic facilities filled with action. The softball and baseball fields ring with the cracks of bats, and on the lacrosse field, athletes run up and down tossing the small rubber ball. Members of the track and field team can be found circling the track, doing reps on the long jump pit and high jump mat, or throwing shot put and discus. In the pool, cheers and splashes from swimmers ring out.

But now, the fields are ghostly quiet and the pool is covered. Athletes have not been allowed to use the facilities for over two months as a result of the campus shutdown due to the novel coronavirus.

In high schools nationwide, athletes have had their spring sport seasons cut short, allowing fewer opportunities for athletes to showcase their skills to college coaches. Although nearly an entire season has been stripped away, leaving many disappointed, these athletes are focused on using this time to improve and train for future competitions.

To examine the impact of COVID-19 on the recruitment of Paly athletes, Verde dove into two spring sports that have been adversely affected: track and field and baseball.

First, national invitationals and meets were postponed. Then, cancelled. Local invitationals were called off soon after. Still, many Paly track and field athletes remained optimistic as events were struck from their calendars, their optimism buoyed by their league meets that remained scheduled.

Eventually, those meets too, along with practices, were canceled. Tracks were fenced off and the shelter-in-place order forced athletes to find alternative ways to get their workouts in, running at parks or nature trails or through city blocks.

While most athletes can still train, disappointment persists as they reflect on the abrupt ending to their season.

“I was really disappointed because my last three years have been building [and] leading up to this and to have that get destroyed is really hard,” junior track and field athlete David Evans said. “I was in really good shape and I was ready to hit the times I had set for myself.”

Athletes looking to participate in college track have also had crucial recruiting opportunities stripped away. Unlike other sports such as basketball and football, where coaches fly to big-name tournaments to watch top athletes play, runners need to record remarkable times at meets to get their foot in the door with college scouts.

With meets being canceled this year, athletes no longer have the chance to officially hit their target times. Though not ideal, students like Evans must find other ways to demonstrate their growth and showcase their speed.

“I was really disappointed because my last three years have been building [and] leading up to this and to have that get destroyed is really hard.”

“If hitting the times means doing it unofficially in a time trial, so be it,” Evans said. “But I get to show colleges that I can do it, even if an unofficial time doesn’t have as much pull as an official time.”

With track resuming looking more and more unlikely by the day, Evans has changed up his workouts and begun preparing for cross country in the fall.

“I’ve switched back to more of a base training routine where I’m pushing more mileage since I probably won’t have a track season,” Evans said. “Building up a good base and endurance is really important, and I still want to run these times, but I’m just going to have to do it later.”

While uncertainty stemming from the novel coronavirus has left athletic schedules in flux, Evans is determined to be prepared to step back on the track, whenever that day comes.

“This is my chance to improve and get my times up so I’m ready when I finally get the chance to race,” Evans said.

Before the cancelation of school and all related activities, including athletics, Paly’s baseball team was on track for another successful year. They were nearly undefeated, with the only loss coming in a close game against Valley Christian High School, one of the best teams in the state. However, with the cancelation of the baseball season, players were stripped of a promising season and, for some, their last chance of recruitment.

Junior Callum Olsen is a pitcher on Paly’s baseball team and aims to play college baseball, although he has yet to commit. For Olsen, this season was his final opportunity to show off his skills to colleges. 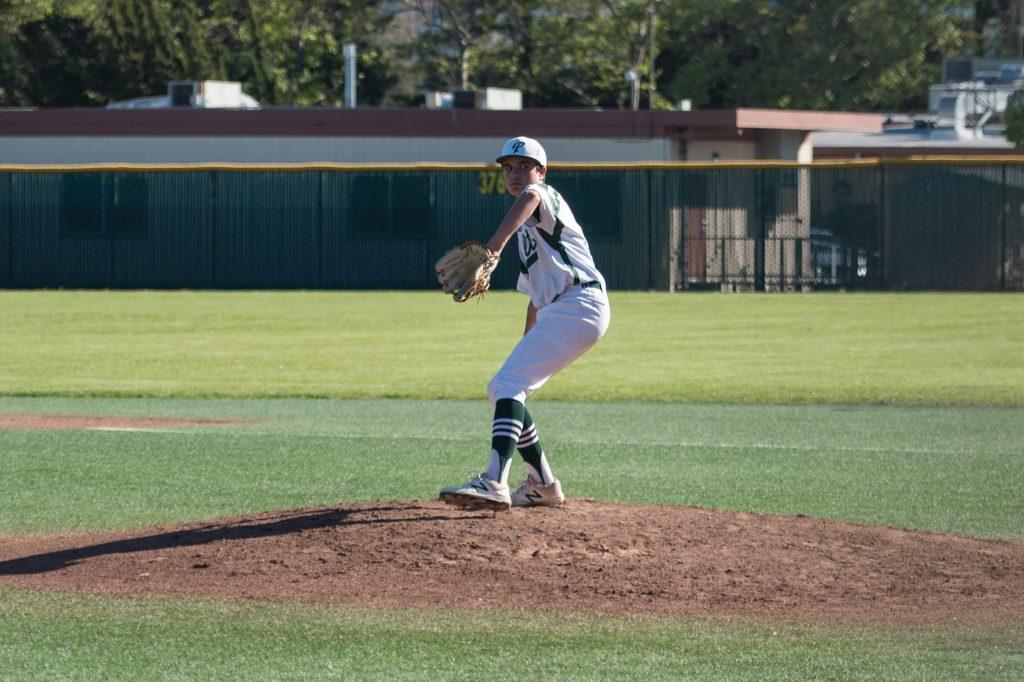 PITCHING PERFECT — Junior Callum Olsen stares down the plate as he delivers a pitch to an opposing batter from Cupertino High School. “I’ve been working out with this private pitching coach I have in Campbell,” Olsen said. “So if anything, my training has gotten better, [because of] just a lot more time on my hands.” Photo by Jenna Hickey

Due to the coronavirus, the chances of high school players making it to the college level are much slimmer, even for those who have already committed. College athletes who lost their senior season in the wake of the virus will retain eligibility next year, which decreases the amount of offers going out to current high schoolers and also decreases the amount of playing time for incoming student athletes.

“The MLB [Major League Baseball] draft this year was shortened by 25 rounds, which means a lot less college guys are going into the MLB,” Olsen said. “There’s gonna be a lot of guys sticking around instead of moving on.”

While underclassmen have more time to showcase their skills, Olsen and other juniors who are looking to be recruited are missing out on crucial opportunities to play.

“I’d say for all those juniors it was a really important season because it’s junior year, you’re starting to do applications,” Olsen said. “I think we just kind of got screwed … Now everything is up in the air.”

Although the high school season is important, participating in summer baseball is also considered necessary for recruitment.

“I think summer ball in terms of recruiting is more important than the high school season,” Olsen said. “At tournaments during summer ball, scouts are specifically going to those tournaments, whereas in high school you’ll occasionally get a scout at your game.”

Since the shelter-in-place order is indefinite, Olsen and other baseball players across the country are unsure of whether or not these summer baseball camps will be open. .

“They canceled the Cape Cod League, which is like a super big college summer league,” Olsen said. “If they cancel college baseball, there’s a 99% chance that we’re getting canceled too.”

Although the recruitment process itself has come to a halt, the cancelation of school allows Olsen to continue honing his craft and perfecting his pitching.

“I’ve been working out with this private pitching coach I have in Campbell,” Olsen said. “Every day, there’s me and one other guy going, then it can be anywhere from three to five hours that we’re there each day. So if anything, my training has gotten better, [because of] just a lot more time on my hands.”

Because of the increased training time, Olsen remains optimistic about his chances of recruitment.

Putting sports on a pedestal: Why school sports are not flexible enough