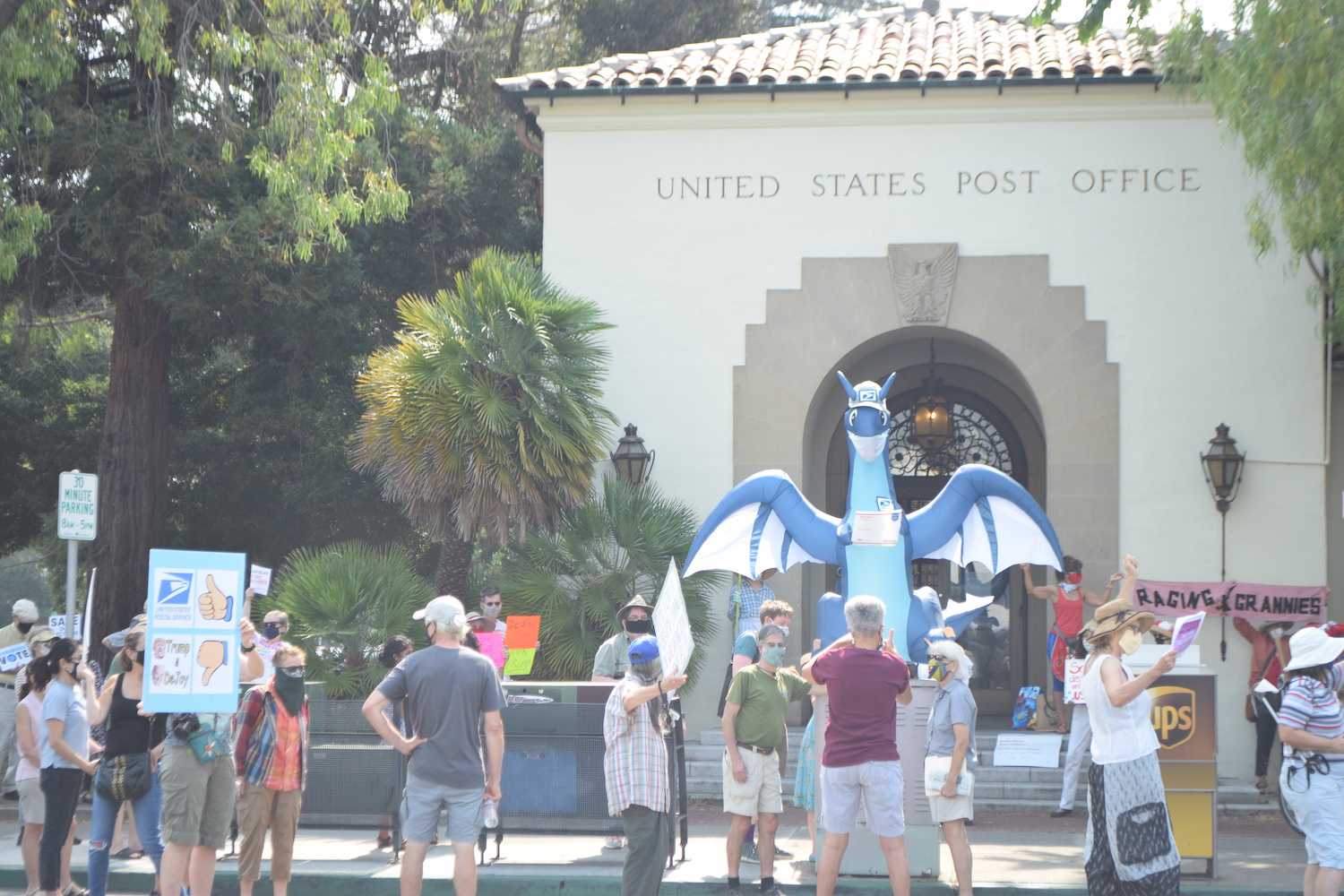 POSTAL PROTESTING — Palo Altans express their frustrations with the U.S. Postmaster General this morning in front of the Downtown Palo Alto Post Office. “We need the USPS, it's an essential public function underwritten in the Constitution, and this is an urgent problem, so let's take action,” the organizers wrote on their website. Photo by Avery Hanna

Supporters of the U.S. Postal Service gathered in front of the Downtown Palo Alto Post Office this morning to defend the agency, which has been suffering under changes implemented by U.S. Postmaster General Louis DeJoy, according to event organizers.

Changes such as reducing post office hours have contributed to USPS’ faltering ability to efficiently and effectively perform its job, an issue which has been recognized by DeJoy himself. Facing a presidential election just months away in which a record number of Americans will vote by mail due to COVID-19, the agency’s plight has taken center stage, with the House passing a bill today to boost funding and block changes.

Images on social media of USPS mailboxes being removed from streets throughout the country further fueled public outrage. DeJoy explained at a Senate Hearing that they were removed because they were no longer needed and the decision was not a political move.

They’re legit taking the mailboxes off the street. Cheating 101. pic.twitter.com/hkXcV5vtBH

“I hope that people realize that this is something that needs to be done, that the mailboxes get put back and that people can vote by mail in the upcoming election,” said Palo Alto High School sophomore Katie Dorogusker, who attended today’s protest.

The reinstatement of removed mailboxes and mail sorting machines was not the protesters’ only demand. According to the event’s website, protesters were calling for the resignation of DeJoy, on the basis that his leadership has put USPS under threat by jeopardizing mail-in voting, prescription and paycheck deliveries, and public jobs. They also voiced opposition to President Donald Trump and Senate Republicans who have blocked funding for the agency.

The rally, organized by Palo Alto Action for Justice and the Raging Grannies had around 100 participants despite smoky skies from wildfires burning across the state and COVID-19 concerns. Similar protests took place across the country. Of those who came, many brought signs with messages including “Save the post office. Save democracy” and “Stamp out fascism.” Attendees were encouraged to wear masks and practice social distancing.

“People need to be mindful that … our democracy is under threat and a big reason is that the U.S. Postal Service is being underfunded and attacked,” rally attendee Wendy Hafkenschiel said. “It makes me feel good inside to be around people that are feeling the same way and [feeling] the urgency.”

Letters, stamps, chats: Past meets present in the post office