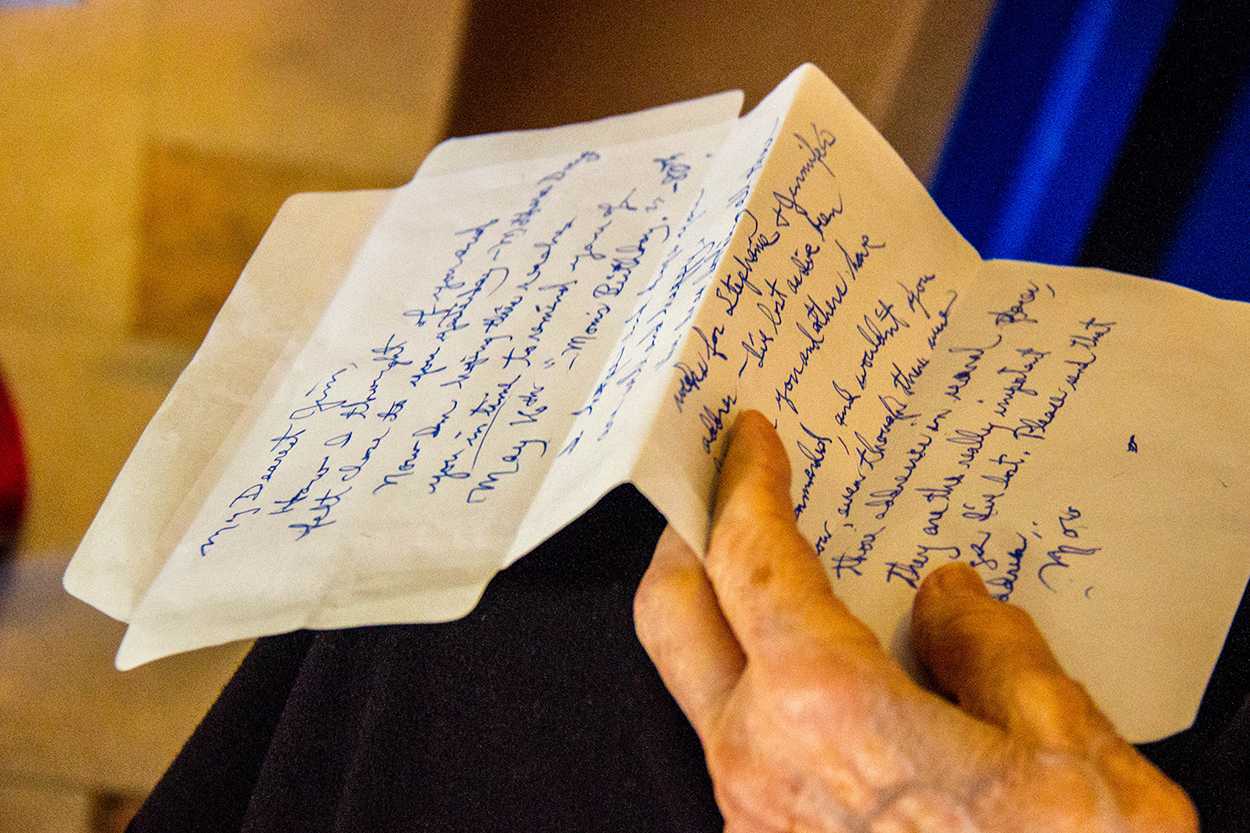 Letters, Stamps, Chats: Past meets present in the post office

When we walk into the Hamilton Avenue post office, a quiet peace permeates the place. People calmly wait, single file, as packages are scanned at the counter and taken one by one.

Late-afternoon sun streams through the windows, creating a lazy, relaxed atmosphere. People of all sorts come and go, shipping their packages off to all corners of the world. A mother calms her child in a stroller while trying to fill out paperwork, and a young couple mulls through a stack of multicolored packages, finally settling on a cheery heart-studded one.

A mother in a purple knit jacket fills out paperwork for her four brightly wrapped presents. She speaks softly in a foreign language to her young son, who turns the card cart around. Over at the desk, two women and one man clothed in pale blue uniform shirts, work at scales and cash registers. A woman in a wheelchair with an Anna Eshoo campaign sign on the back rolls up to the desks to inquire whether it’s legal to be in a post office with campaign signs. A man goes up to the desk and is informed that whatever he is looking for will happen “next month.”

We stand next to the windows awkwardly, pressing into the iron detailing of the window as people rush by, eager to get out of the post office. It’s difficult to find people who are willing to take time and speak to us, but even in the harried atmosphere, there are a few people who stop, eager to talk and hit the pause button on life, even if only briefly.

In the corner of the building, an elderly lady bends intently over a letter, scrawling in messy cursive on a thin graying paper. Doris Dahlgren, 79, is writing to her son Jim, who lives in Spain and is the concertmaster of a renowned orchestra. Dahlgren and her son usually connect over the phone, but after a few weeks of not hearing from him, she decided to send him a letter reminding him of her upcoming 80th birthday and Mother’s Day.

Dahlgren looks up from her letter and smiles as we approach her. As we ask her if she’s willing to be interviewed, she launches into a speech about her life — the abridged version, we later learn — and then, 20 minutes later, asks us what we’d like to ask her about.

An artist, a student, a political volunteer, an activist for mental health — the list of Dahlgren’s proffesions goes on. The “Anna Eshoo for Congress” campaign sign that hangs off the back of her wheelchair betrays her political affiliation, and as she speaks she informs us of the neurological conditions that forced her into a wheelchair.

She was born in 1936 in the throes of the worst of the South Dakota dust bowl. Her family, who were farmers, owned 400 acres, a fact she remains proud of. As a child she went to see the Wizard of Oz, and saw the twister rip apart Dorothy’s house with some trepidation.

“They thought it would be good to take me to see Dorothy in “The Wizard of Oz”,” said Dahlgren. “Good God! There was a real dust storm and it lifted our whole house. We had to go into the root cellar where the top could have been taken off and we could have been sucked up too.”

Her family later moved to Oregon, where she completed high school, noting that she was often motivated to do well in school as authority figures were invoked.

“You had to learn these songs otherwise you would go to hell,” Dahlgren says. “And if you went to hell, you burned forever.”

As she begins to talk about mental health and art, often diving headlong into interesting tangents, a younger woman walks up to the package station and starts rifling through for two large boxes. When Dahlgren notices two colorful canvases in her hands, she immediately begins to inquire about the art, which we discover is headed to the woman’s friends who are getting married on the East Coast soon.

Pavita Singh is a young graduate who holds a master’s degree from Yale in public health. Also intensely interested in mental health and outreach, she lives in Palo Alto with her family. Her childhood was spent in multiple locations across the U.S. as her father’s work changed from computer science and neurobiolgy to healthcare, and finally to venture capitalism.

After being hospitalized for an anxiety attack during college, Singh developed an interest in mental health, and decided to pursue it as a career. She currently volunteers with suicide prevention programs and hospitals around the area.

Deciding to explore areas outside her professional discipline, Singh signed up for painting classes this past January, and what started as an area of exploration has soon morphed into a deep passion. Though she finds her interest in art immensely different from her career in medicine, she says that they exhibit a lot of overlap. 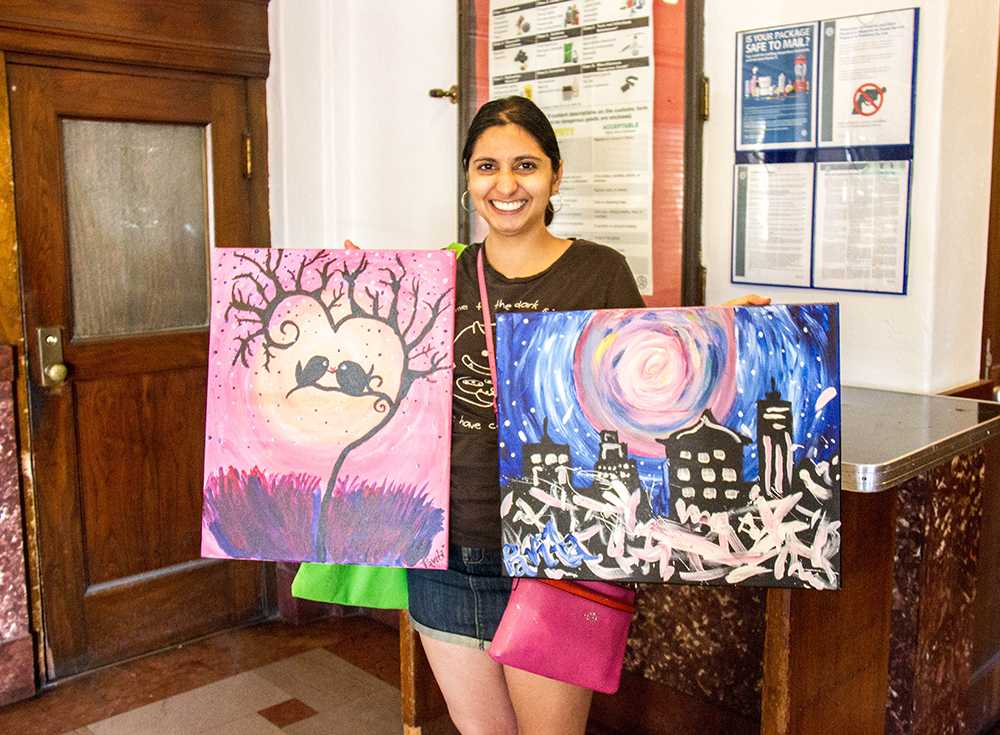 Singh holds her paintings, which will be sent to friends living on the East Coast

“I’m trying to try to find a way to integrate the two [art and mental health],” says Singh. “I find art very healing and therapeutic. One thing I love about public health is how interdisciplinary it is … it really encompasses so many different areas  of our lives, so I’m always looking for interconnections.”

When we return to the post office the next day, we spot two men wearing business attire walk in confidently, laughing and joking around with each other. The two seem like familiar colleagues, friends even, and when we approach them we discover that one of the men works for the other. Bryan Cohen, who owns two small businesses, has come to pay some bills.

All throughout the interview, Cohen is hastily filling out the paperwork for his mail, and he seems to be rushing to finish. When we approach him, he examines his watch and agrees to an interview under the condition that it will only last for two minutes.

Cohen, who grew up in the Bay Area and attended the University of San Francisco, is currently the sole owner of Pinnacle Consultants and Laundroland, which was an investment to pay for a college kid’s education.

The two colleagues continue to jest throughout the course of the interview; when we ask  in what capacity Cohen works with his colleague, his colleague responds with jokingly with “He says he works for us but he really doesn’t.” Cohen quickly responds with a witty “I just show up and get a check,” and the two bend over laughing.

When we reach our two-minute limit, he says “You can have one more question — go ahead.” We decide to tap into his obvious business prowess and wealth of experiences by asking for advice for aspiring businesspeople.

As time elapses, customers of all ages and sorts come and go, sending off their letters and packages to people around the world. Hundreds of connections are formed by way of a service that is becoming rarer and rarer with the boom of internet communication. Regardless, post offices remain a gathering place for multitudes of people and an important cornerstone of American culture.