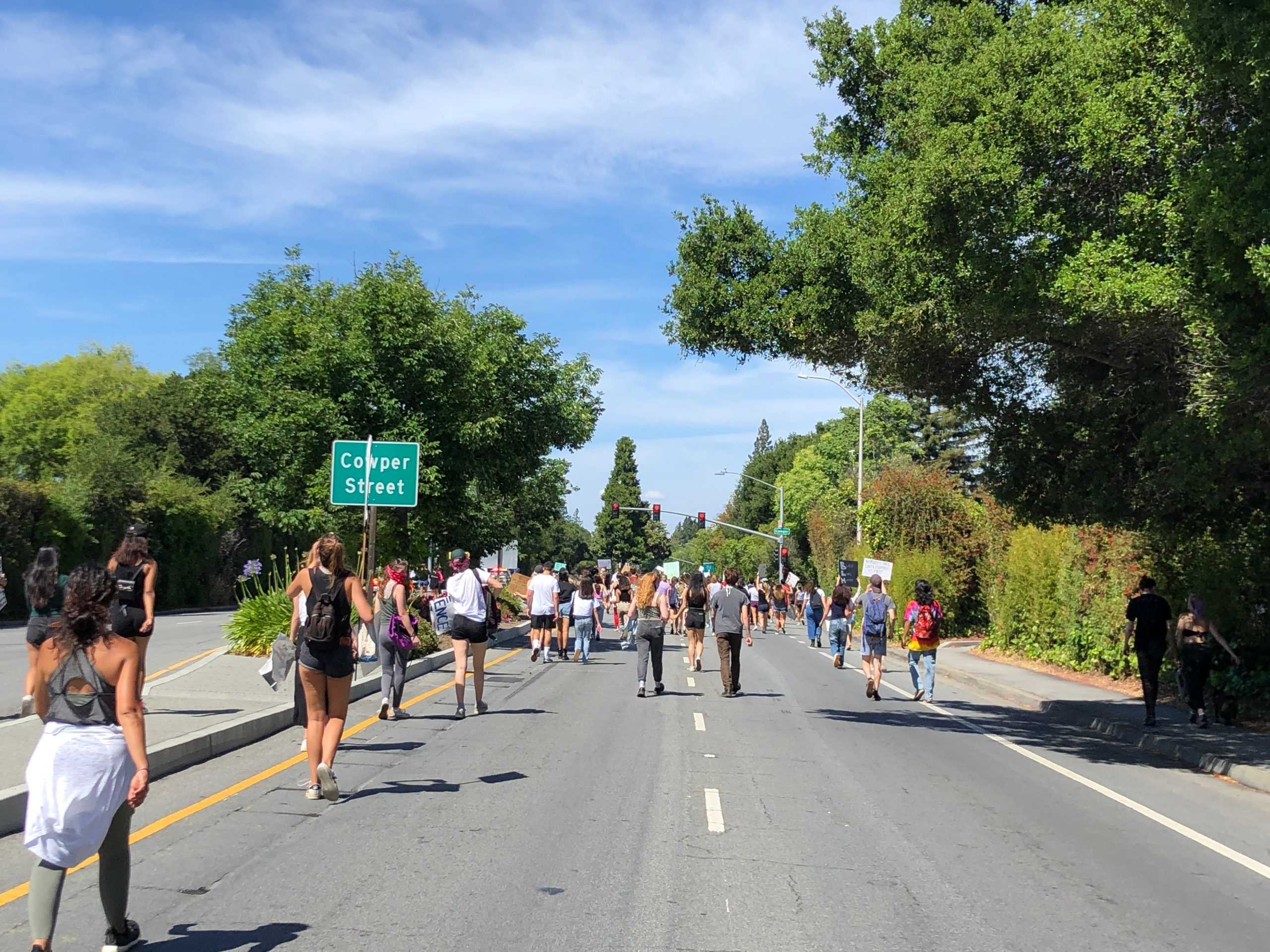 PROTEST PROGRESSION — Protesters march down Oregon Expressway on June 1, blocking traffic. “Taking part in a protest that gathered wide attention but was led by teenagers showed the community and the world that our generation will continue to fight for human rights, peace, and change in the law enforcement system,” Palo Alto High School junior Dani Colman, a participant of yesterday’s protest, said. Photo by Miles Breen

Update: City Manager Ed Shikada issued an order terminating the 10-day curfew as of Thursday, June 4 at 5 a.m. The City of Palo Alto press release states that the curfew was lifted in response to reduced overnight criminal activity.

An 8:30 p.m.-to-5 a.m. curfew order has been implemented in Palo Alto, effective tonight until June 11, following incidents of looting and other illegal activity in the Bay Area.

The order states, “During the curfew, no person shall be upon the public street, road, sidewalk, alley, park, plaza or other right of way, anywhere within the jurisdictional boundaries of the City of Palo Alto.”

A violation of the curfew is considered a misdemeanor and may result in fines or arrests imposed by local law enforcement, according to the City of Palo Alto news release on June 2. Exemptions to the order include emergency personnel like police officers, peace officers and firefighters, as well as utility workers, authorized representatives of any news service, anyone experiencing homelessness and people traveling to seek or provide medical care.

The announcement published on the City of Palo Alto website assured residents that this measure is not intended to limit peaceful protests, and is meant solely to prevent illegal behavior.

“The City of Palo Alto protects our right to protest and to voice anger and disappointment in response to the murder of George Floyd in Minneapolis on May 25,” Palo Alto Mayor Adrian Fine said. “People are understandably outraged about racism and prejudice in our society. We encourage you to support your neighbors, family, friends, and local businesses as appropriate, and we appreciate your support during this challenging time.”

While local demonstrations have remained peaceful for the most part, incidents of break-ins, vandalism and suspicious activity have been reported, according to the declaration of the curfew.

“Planning is underway for additional organized criminal activity that could very quickly threaten harm to persons and property, and that such activity is imminent,” the declaration of curfew stated.

Palo Alto High School students are among those who have been taking part in protests. Yesterday, students gathered at the Palo Alto City Hall at 2 p.m. and made their way to U.S. Highway 101 where they blocked traffic on the northbound lanes. Along the way, protesters also blocked traffic on Oregon Expressway and they eventually returned to City Hall in Downtown Palo Alto.

“It’s also important that some of us recognize our privilege, and stand with our brothers and sisters who are impacted, even if the issue does not affect our lives directly,” Paly junior Dani Colman, who participated in Monday’s protest, said. “The marches had the purpose of just that. By coming together as a diverse community, we were able to demonstrate unity, and reinforce the idea that none of us are free until all of us are.” 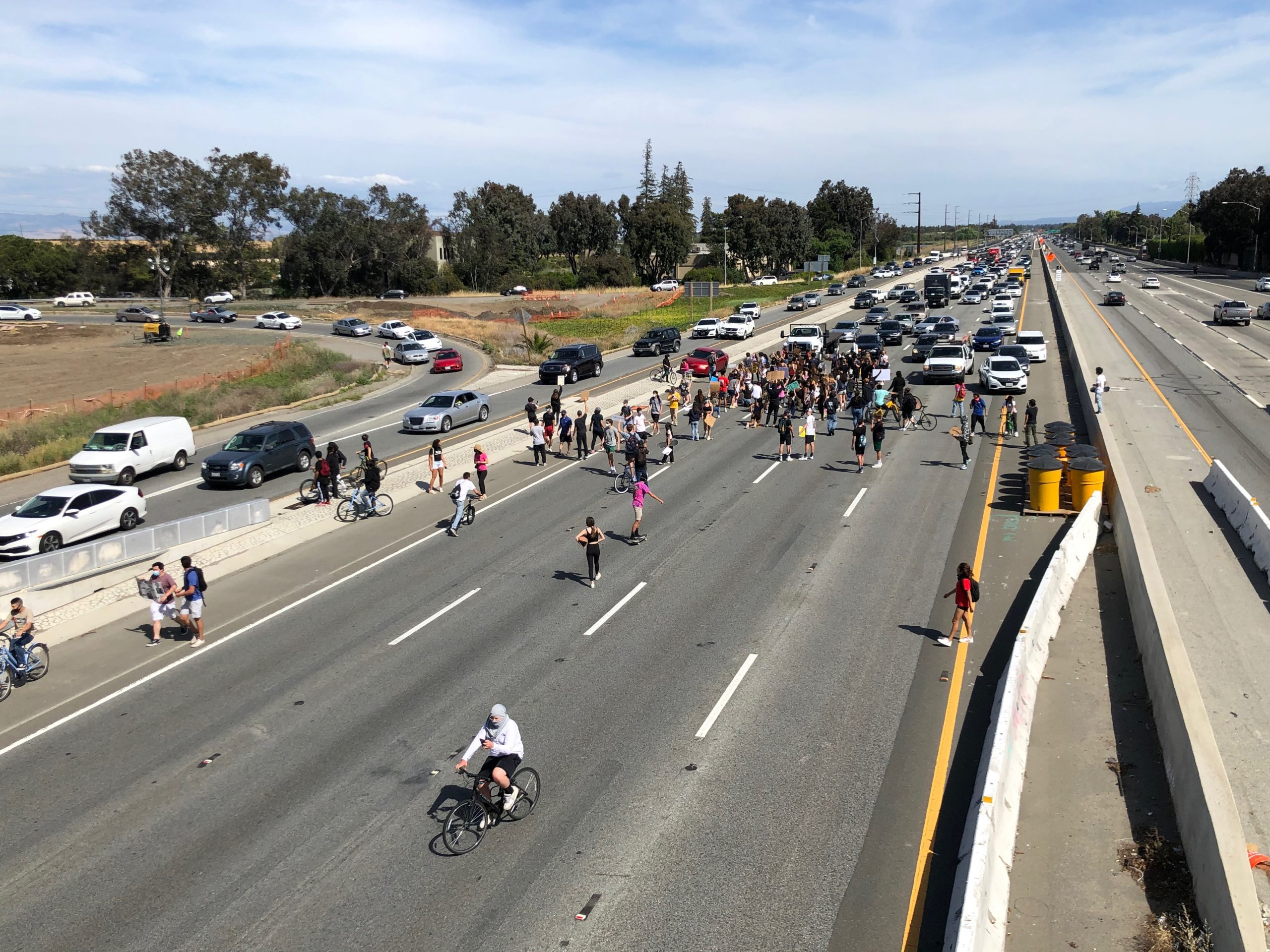 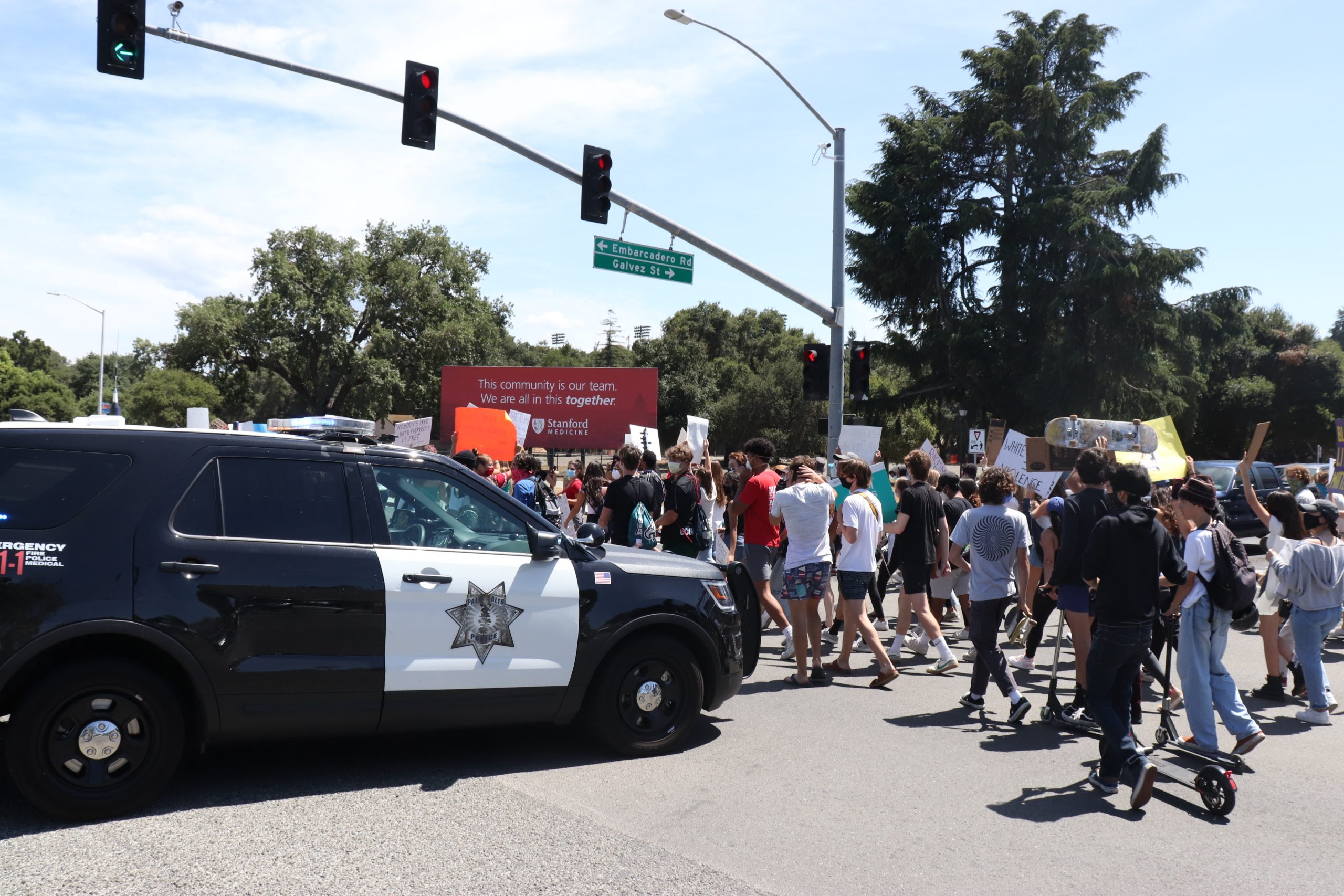