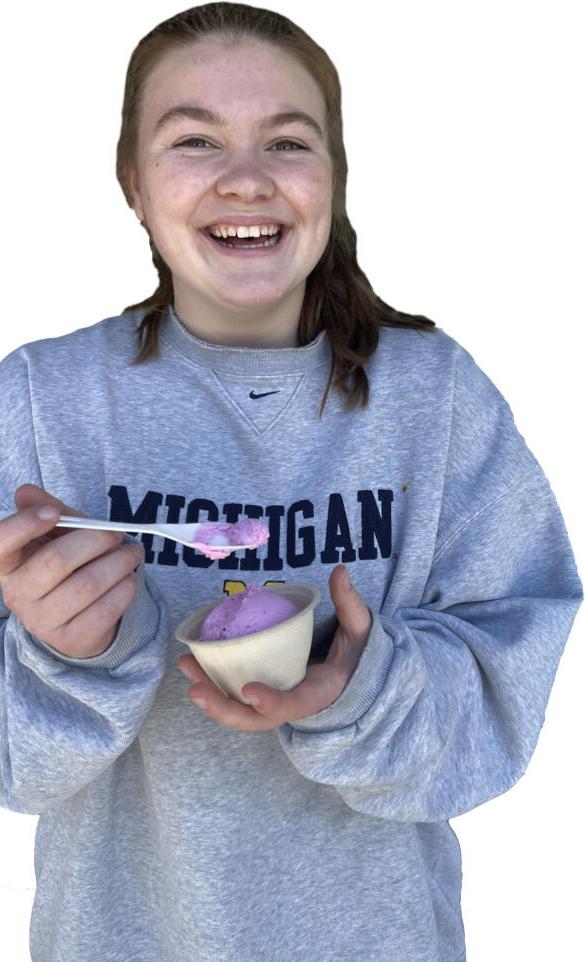 Chilly, sweet and savory treats : Around the world in summer snacks

As the summer heat creeps into Palo Alto, its residents seemingly have endless options for refreshing snacks. Verde tried and reviewed different snacks from around the world, we tried South Korean bingsoo, Indian pani puri and Italian gelato. 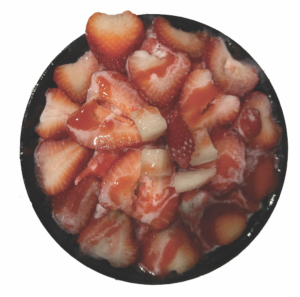 Sophomore Sophia Kim remembers times from her childhood connected to this cool dessert.

“When I was younger, my parents were always busy so we rarely ate out, but when we did we would sometimes go to this Korean plaza that had a shaved ice dessert place in it,” Kim said. “We’d usually get two to share — one patbingsu with mochi and the other with fruit. I remember enjoying it after a nice meal during the spring or summer months.”

The bingsoo from local Korean dessert cafe Sul & Beans had strawberry syrup between layers of shaved ice and was topped with sliced strawberries, a strawberry syrup drizzle and a couple pieces of mochi. This dessert was balanced by the textures from the finely shaved ice and the slices of fresh strawberries. The coolness of the ice and the freshness of the fruit balanced out with the sweetness from the syrup.

After eating a majority of the bingsoo, however, the ice shavings started to melt and the syrup became too sweet — there almost became a slush at the bottom of the bowl. Overall, however, bingsoo is perfect after a heavy meal and is best shared with at least one other person. 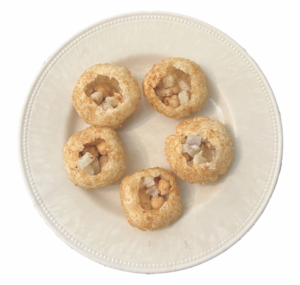 Pani puri is a common Indian street food that consists of potato, chickpea, onion chili powder and chaat masala filling contained within a crispy thin shell — the puri. It is also filled with mint and tamarind flavored water, the pani, and is consumed in a single bite.

Junior Shaivi Sanchorawala reflected on the significance of the popular food in her own life.

“Pani puri has been a comfort food in many Indian households for so long, as well as a great afternoon snack,” Sanchorawala said. “The pani is spicy but refreshing on a hot Indian summer day and the puris add the crunchy and exciting part of the snack.”

Eating this snack was an entire procedure; it first began with watching the vendor poke a hole in the fried puri and fill it with the potato-chickpea-onion mixture. When it was time to eat the pani puri, around a tablespoon of flavored water was ladled into the shell.

The addition of the flavored water started the race against time to get the vessel into my mouth before it leaked down my arm or spilled onto the table. When chewed, the tanginess from the tamarind, the mild spice from the filling and a slight sourness from the flavored water could all be tasted. Overall, this snack is a refreshing bite with the right amount of tang and the perfect mixture of textures. 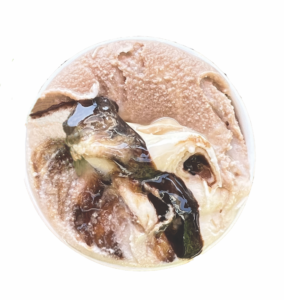 Though its literal translation from Italian to English is “ice cream,” gelato — a frozen custard dessert — and ice cream are not the same. Often compared to ice cream, gelato is denser and stored at a higher temperature, giving it a more intense flavor.

“It [gelato] reminds me of Italy and the countless summers I’ve spent there, just walking around Rome and eating gelato,” Landolfi said. “All the different flavors means it has a variety that makes it never boring, so you can really eat it whenever.”

Verde ventured to Gelato Classico, a nearby gelateria, and tried two flavors, tiramisu and creme brulee.

When scooped with a flat spoon, the gelato stretched and had visible small granules of sugar and ice. The flavors melted on the tongue and were more intense than regular ice cream because the granules of ice were noticeably smaller.

The tiramisu gelato had a deep coffee flavor that packed a punch with every bite, while the sweet chocolate sauce offset the bitterness of the coffee.

The creme brulee gelato, on the other hand, was soft and sweet on the tongue — with an overall smooth and creamy flavor.

Eating the two flavors together was the perfect harmony of sweetness, bitterness and coolness.