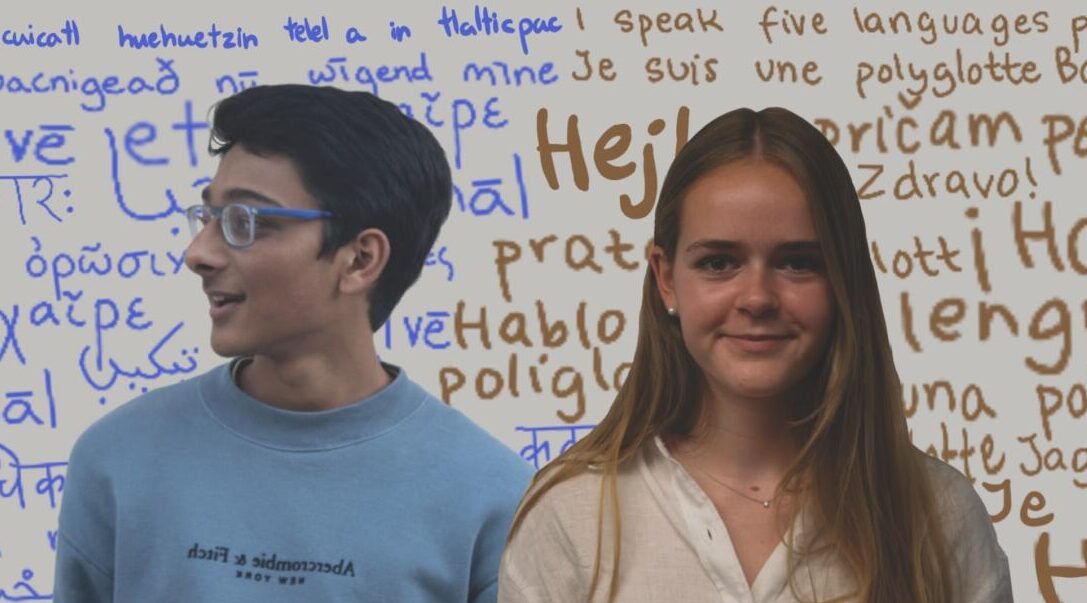 A love for languages: Polyglots reflect on linguistics experience

Multilingua. بوليجلوت. बहुभाषी.πολῠ́γλωσσος.  बहुभाषग्रन्. Polyglot. Regardless of what language you use to describe one, a polyglot is an individual who is capable of “speaking or writing several languages,” according to Merriam-Webster.

While many at Palo Alto High School are multilingual, a few determined students like junior Lea Muminović Hadžić and senior Neil Rathi have taken the next step in becoming true polyglots.

Paly junior Lea Muminović Hadžić said she does not remember a time when she was not a polyglot. Hadžić is fluent in five languages: Bosnian, Swedish, English, French and Spanish — that is, if you leave out American Sign Language, which she picked up for fun in the early months of the COVID-19 lockdown.

“In Europe, it’s a lot of small countries with a lot of different languages, it’s not forced to learn a lot of languages but it becomes necessary, and something people want to do.”

Hadžić credits her ability to retain language to starting young; it is commonly known that the younger an individual is, the easier it is for their brain to absorb and retain languages. Her advice to those learning languages is to go beyond simply studying grammar.

“Sometimes just studying the technicalities and grammar can get very nitty and gritty and very tedious, and sometimes you lose interest,” Hadžić said. “So I think it’s important when you’re learning your language to really do things you love — read books, watch movies.”

For example, social media usage — in particular, running a Selena Gomez fan page on Instagram — was essential to Hadžić’s process of learning English.

“I didn’t do it [run the fan account] for the purpose of practicing a language but looking back now, I realized that even though I started learning English [at home], my English came from being on social media,” Hadžić said.

Having a grasp on not one, but five languages comes with perks in and out of the classroom. Upon learning about the Louisiana Purchase in AP U.S. History, Hadžić took her education of the subject one step further.

With five languages under her belt, Hadžić is sure that her languages will aid in future endeavors as well.

“Whether I want to work with business or policymaking, I’m sure I’ll have so many doors open,” Hadžić said.

Senior Neil Rathi took a Latin class with the intention of simply satisfying school credits — and then promptly found interest in the field of linguistics as a result, even founding Paly’s Linguistics Club.

“There were really interesting parallels between Latin and Hindi,” Rathi said. “That was kind of what got me started into being interested in language.”

For the most part, learning languages is a self-driven project for him. Rathi was always exposed to Hindi through his family but never was able to properly converse with them. When learning Hindi, his main strategy was jumping into those Hindi conversations

Similarly to Hadžić, Rathi has seen new languages open doors for him to explore foreign topics at a deeper level.

“Languages have, within them, this very distinct storytelling tradition,” Rathi said. “When I learned Latin, I was able to learn a lot of new stuff about Roman history and Roman military tactics. When I learned Greek, I was able to start reading about Greek philosophy.”

Rathi hopes speaking these languages will preserve elements of culture that cannot be expressed in other languages.

“Each of these languages carries this entire new body of literature that sometimes isn’t translated and sometimes even if it is translated, it doesn’t really do justice to translate it,” Rathi said. “In Greek ‘eudaimonia’ (εὐδαιμονία) is roughly ‘happiness’ but it comes with this connotation of luck so it more closely translates to ‘luck-derived happiness.’”

Beyond English, Latin and Hindi, Rathi emphasized the importance of  picking up historical, and in some cases, “dying,” languages.

“There are currently 7,000 languages and some estimates say that like in the next 100 years, half of them will be extinct,” Rathi said. “So it’s really important just to protect those languages because they contain so much history of different cultures and places.”