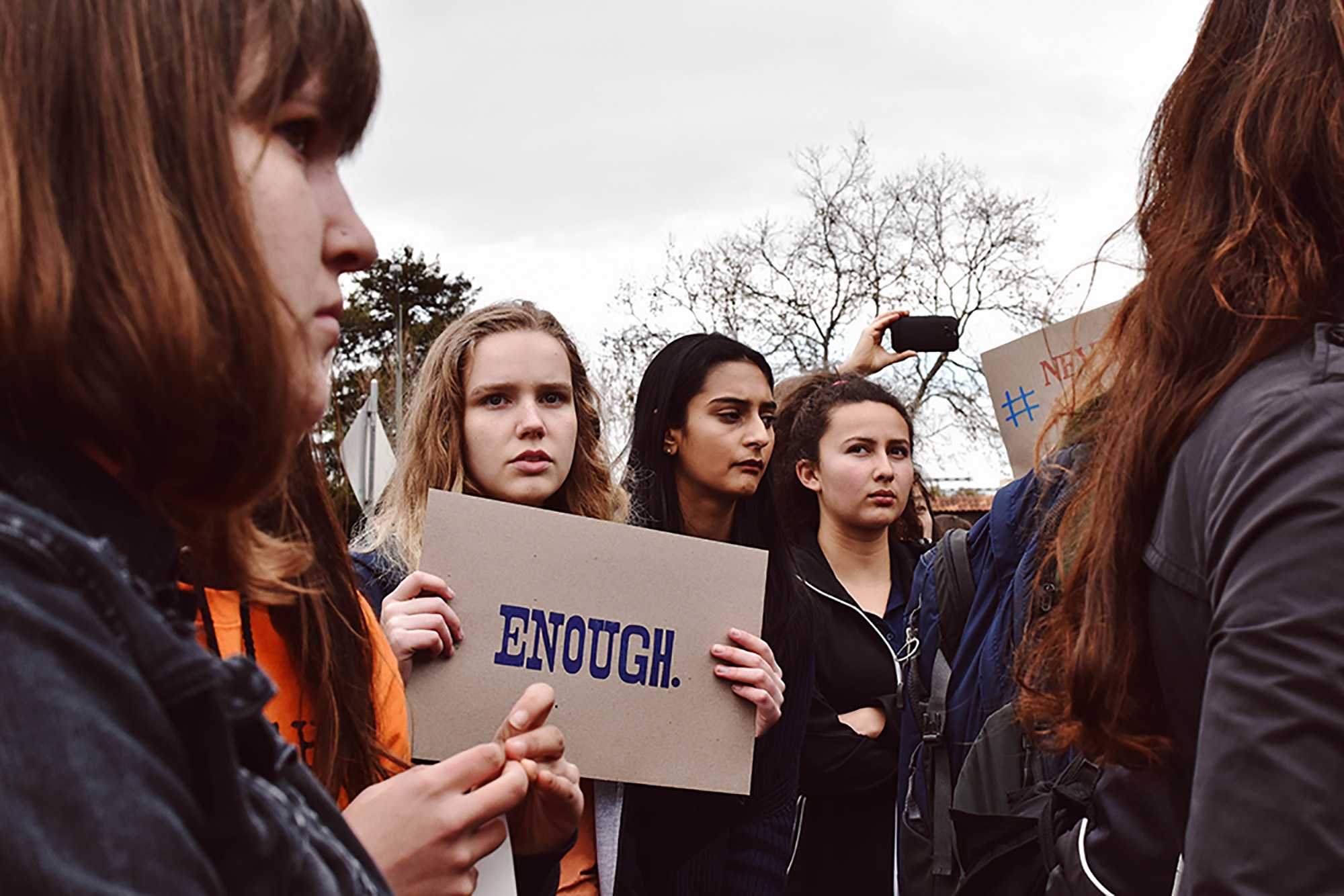 The protest unfolded from a couple of cardboard boxes. Student organizers pulled out neon orange t-shirts with #EnoughIsEnough printed on the front, and as the crowd swelled in size, the orange color began to permeate throughout. Mumbling spread through the crowd, first in confusion but then in anticipation. 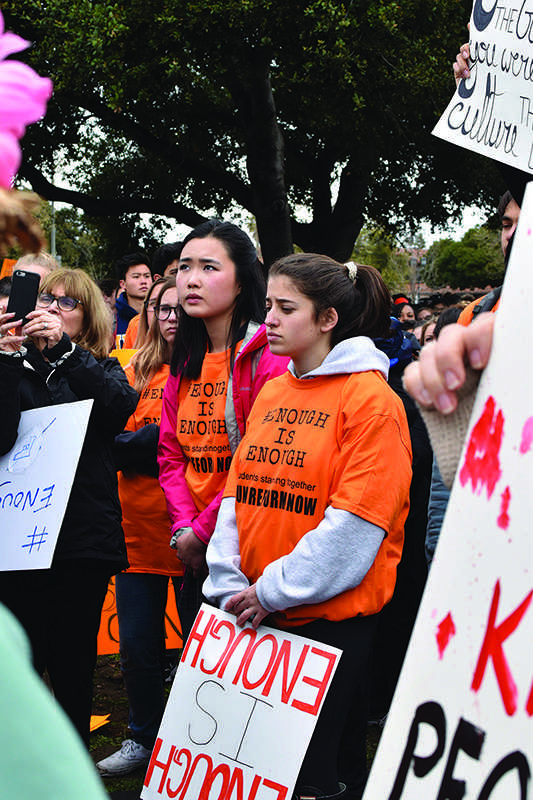 LEST WE FORGET Palo Alto High School students Vivian Feng and Noga Hurwitz stand solemn- ly as the walkout pro- ceeds. One purpose of the event was to hon- or the memory of the 17 students and three sta that died in the Stoneman Douglas attack.

“Enough is enough,” their hashtag read. So they walked out.

After the Florida shooting at Marjory Stoneman Douglas High School, students from around the country, including Palo Alto, called for gun reform at the national level.

The National School Walkout on March 14, planned to last exactly 17 minutes — one for each victim of the Florida shooting — brought Palo Alto High School students together in a show of solidarity with the victims.

With additional marches planned on March 24 and April 20 (the 29th an- niversary of the Columbine High School Shooting), students are up in arms about the nationwide apathy towards and failure to adequately respond to gun violence. rough political action and protest, they’re making themselves and their message visible — and not just through their brightly colored shirts.

All the other kids

Nearly a thousand students participated in the march, thanks to intense planning by a team of ery leaders — seniors Louisa Keyani and Naomi Moresi, as well as junior Warren Wagner, who is also a staffer on Verde magazine.

Keyani’s decision to lead the walkout came after seeing how her peers at Stoneman Douglas reacted.

“I feel like a lot of the times after school shootings they’ll be in the news and will go away,” she says. “To see the group of students get up and start taking immediate action made me feel like this is a very pivotal moment in history.”

“I feel like a lot of the times after school shootings they’ll be in the news and will go away. To see the group of students get up and start taking immediate action made me feel like this is a very pivotal moment in history.”

“Whenever a major emergency or event happens, there is a very visceral response from the global community,” she says. “ There are ‘we’ve got to change something’ vibes. It is in that state that I returned to California.”

Another student, junior Zoe Sid, was in charge of reaching out to local schools and media stations. She coordinated with the Castilleja junior class president to in form them of Paly’s protest plans.

“Our school, along with Castilleja, is trying to make a huge statement along with the other high schools around the nation,” she says.

Sid says that she decided to join the movement after talking to her neighbor, a Google employee who provided her with a new perspective on the power of digital communication. Once he got her thinking about the in uence that activism can have, she decided it was time for her to join in.

“He is always telling me how influential media can be,” she says. “It got me thinking that just one hashtag or a picture from a person can start an entire trend around the globe.”

The morning of March 14, Castilleja students and the Raging Grannies, a group of elderly women activists, joined Paly students as the walkout came to life on the corner of Embarcadero Road and El Camino Road. The atmosphere was both somber and triumphant. Some students listened to peer speakers discuss gun control and the importance of voting. Others demanded change with signs reading ‘Protect people, not
guns’ and ‘I will be next.’ Reasons for standing on the concrete were as diverse as the demonstrators themselves.

For freshman Owen Longstreth, the walkout signed a call to the federal government to prevent further tragedy.

“We’ve had a lot of school shootings over the years,” Longstreth says. “I feel like it’s a really big problem that needs to be addressed. They [the Trump administration] have been doing a really terrible job.”

Others, like junior Bakari Spencer, focused on the victims of the recent shooting. “I’m here because it’s a good cause, and I want to commemorate the guys that were lost,” Spencer says.

Sophomore Gracia Hmelar, on the other hand, regarded the walkout as a demonstration of the power of student activism.

“Standing up and showing that we are not just going to stay quiet and silent about it [gun violence] and let the adults do the work is really important,” Hmelar says. “It seems like we are doing more than they are right now.”

The event was not contained to students and elderly activists. Palo Alto Weekly reporters also came to the scene, as did spectators. 26-year-old Joel Siapno, a nurse with the Palo Alto Unified School District, came out of both curiosity and solidarity.

“I kind of wanted to see the student population that is ready to come out and support [the movement] and it’s good to see people standing up for something,” Siapno says.

“I kind of wanted to see the student population that is ready to come out and support [the movement] and it’s good to see people standing up for something.”

For Hurwitz, the movement is a non-partisan call.

“For me this is not a issue of gun safety … which speaks to everyone regardless of opinions on [the] Second Amendment or policies,” she says. “It’s a matter of engaging every single student and faculty behind the idea that students should not be fearful to go to school.”

Shouting down the walls

Besides using their voices for chanting, students are using this movement as a springboard to get more involved in the political process. Sid was only a participant in the schoolwide Peace March of November 15, 2016. But after leading the charge on March 14, she encourages her fellow students to become politcally active as well.

“They can use their right to vote and they can speak out about it [gun violence],” she says. “Post on social media and just try to spread the news as much as possible.”

One of Keyani’s main messages is for students to register or pre-register to vote. She says besides being quick and easy, regis- tering to vote holds signi cance.

“We are the next voting generation,” she says, before adjusting her statement. “We are the people who will be voting in the next elections.”

Up in arms: leaders of walkout hope to galvanize student body