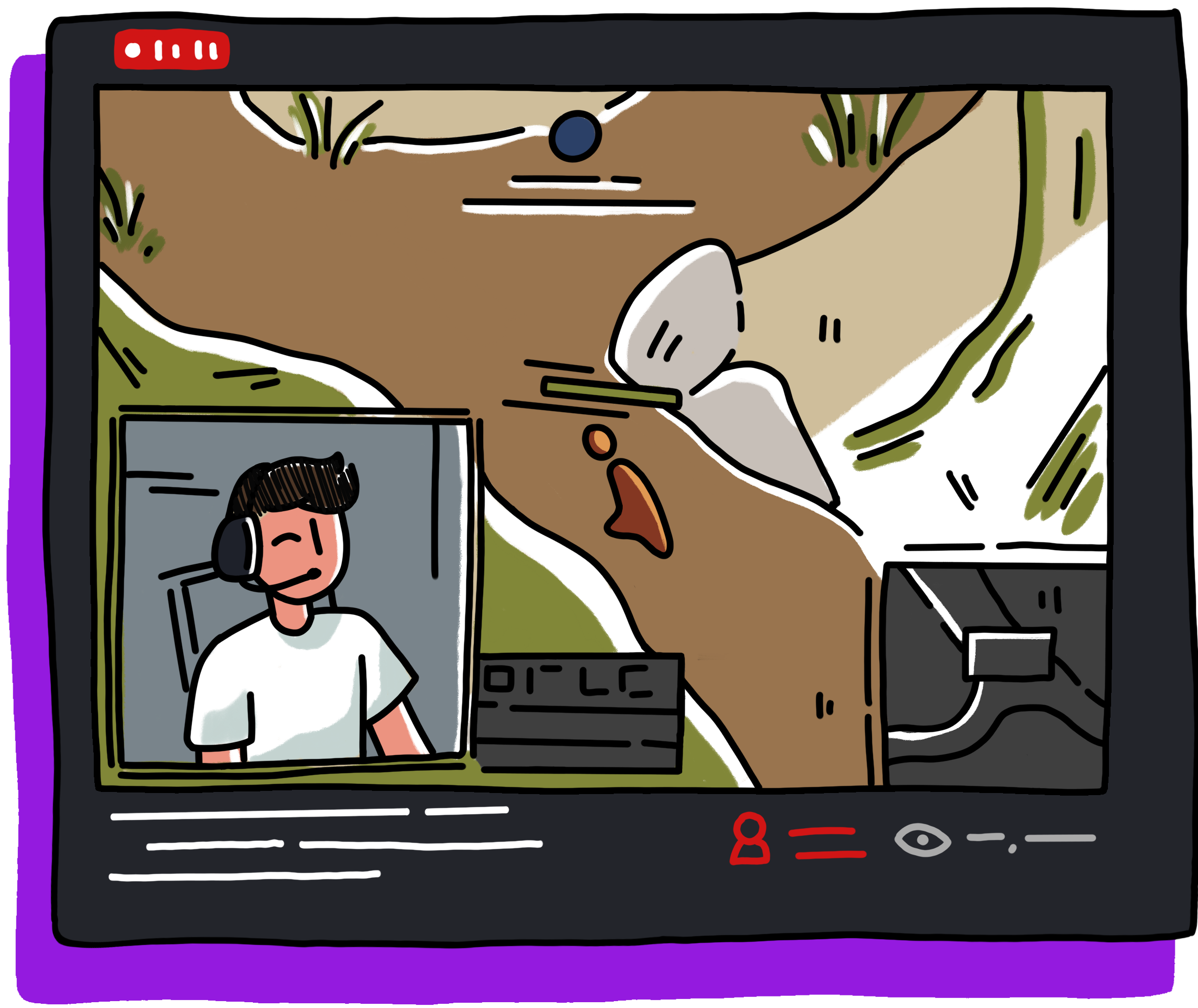 “On the first day of school, I streamed my reaction to the opening video,” Palo Alto High School senior Enzo DeMarinis says. With the uncertainty and excitement of a virtual first day of school, DeMarinis decided to share the experience over Twitch. “I ended up receiving around 57 viewers. It was amazing to have so many people watching me at once and I hope that in the future I’ll be able to constantly have that many viewers at once.”

Twitch is a leading live streaming platform that is used mainly by gamers who broadcast their gameplay to viewers. Popular titles such as “Fortnite”, “Among Us”, “League of Legends”, “Minecraft” and “Grand Theft Auto V” are among the most streamed and watched.

According to junior Alan Alvarez, an ardent Twitch viewer, the allure of the platform lies in its capacity to allow interactions with the streamers he watches and join a community of like-minded individuals.

“There are communities built around streamers, specific video games, or even specific groups of streamers that play together, and everyone has a great connection,” Alvarez says.

Since global COVID-19 lockdowns began in early 2020, the number of Twitch viewers has grown exponentially due to an increase in expendable leisure time. Public figures like Rep. Alexandria Ocasio-Cortez have even used the live streaming service to fundraise and encourage voter turnout.

“COVID-19 has definitely allowed me to use Twitch a lot more than I used to, and that’s just because these streamers are giving people a lot more content than most other platforms,” Alvarez says.

While many students spend their free time watching streamers, a few ambitious students like seniors Justin Laxamana, Matthew Clark, and DeMarinis have taken the leap to start channels of their own.

Laxamana first learned about Twitch in elementary school before the live streaming platform took off, and created an account a couple of years ago for the primary purpose of  streaming “League of Legends.”

“I figured that if I could stream and have a sense of self-achievement while playing the video game, it would make it worthwhile.”

While other streamers may prioritize the number of views, followers, and subscribers they pull in, Laxamana sees it as a passion project and a way to ensure he is making the most of his gaming time.

“One of the things I was guilty of was playing a lot of games, but not making sure that the time I spent on those games were well-worth,” Laxamana says. “I figured that if I could stream and have a sense of self-achievement while playing the video game, it would make it worthwhile.”

Laxamana does not dedicate a fixed amount of time to streaming each week and is instead flexible with his schedule. When he has leisure time, he will usually watch another player’s stream in the background.

“When I’m absolutely doing nothing, I can just watch someone stream as some white noise behind me,” Laxamana says. “Not that I get too interested in what they’re doing; it’s just to have some white noise there.”

Rather than streaming video games like the majority of creators on Twitch, Clark streams his piano playing. He had heard about the platform years ago, but only recently began streaming during COVID-19 in order to maintain social connections with his peers through the chat function.

He has since joined a small but thriving community of fellow non-gamers on Twitch.

“I’m not a huge streamer,” Clark says. “I mostly stream for fun just because it’s a way for me to have a more consistent schedule.”

Clark enjoys sharing his talent on Twitch because it allows him to post more casual content and piano pieces that don’t need to be edited.

“If I want to upload something onto YouTube, I want the songs that I play to be polished,” Clark says. “Whereas if I’m playing on Twitch, it doesn’t really matter how polished the songs are. It’s mainly for fun. I have the freedom to mess up a lot without it mattering too much.”

DeMarinis is an active gamer who has enjoyed considerable success on Twitch, racking up a total of 2,500 non-concurrent views for his streams.

“Currently, I’m kind of a variety streamer, but my main two games are League of Legends and CS:GO,” he says. “For a period in time, I was also doing IRL [in real life] streams. When I had a job at a small store on University Avenue, I would stream myself working there quite often.”

“Twitch has been an amazing platform to share my passions with the world, and I look forward to continuing once I graduate.”

Like Alvarez, DeMarinis enjoys the chat feature on Twitch that enables him to converse with members of the gaming community.

“I love being able to interact with other people while I play games or live my life,” DeMarinis says. “Chat can also be super supportive which is always great.”

From DeMarinis’ standpoint, Twitch has overtaken YouTube in the gaming world because of the convenience that comes with finding content to watch.

“It’s much easier to find a Twitch stream that you want to watch than a YouTube stream because YouTube streams aren’t exactly promoted as much,” DeMarinis says. “They are only really promoted to people who are already subscribers of that channel. A Twitch stream can be found if you go to the game category, so it’s a lot easier.”

Having developed a love for Twitch, DeMarinis plans to stream more often after high school — during the summer and beyond.

“Twitch has been an amazing platform to share my passions with the world, and I look forward to continuing once I graduate,” DeMarinis says.