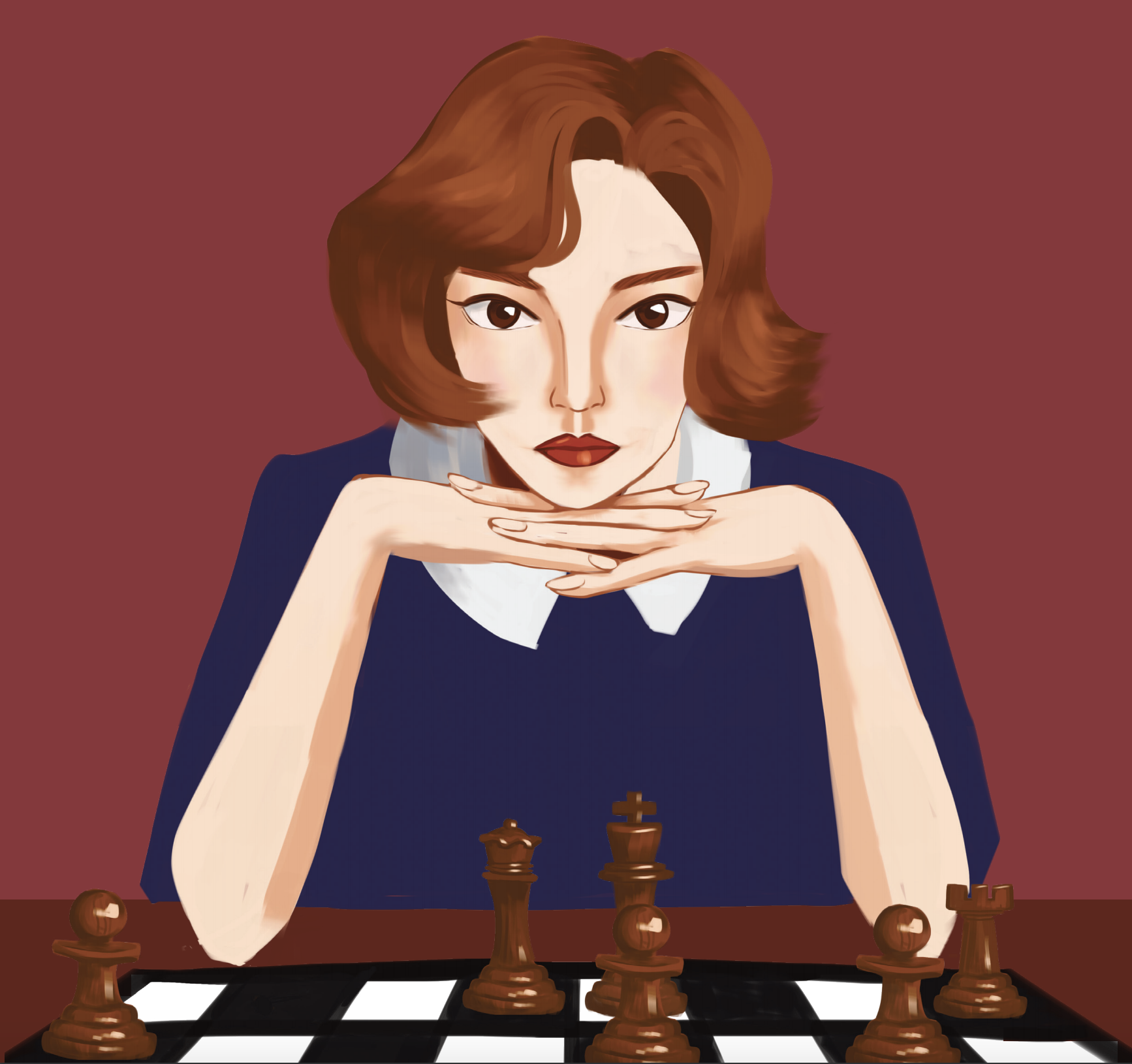 Green tranquilizer pills tumble out of a ceramic toothbrush holder into the palm of a 9-year-old girl with roughly cut bangs. She swallows them dry, and the dark shadows on the ceiling begin to morph into the pattern of a chessboard. A looming stone pillar — the queen — materializes, hanging upside down from the ceiling, quickly followed by the remaining 31 chess pieces. Flashing in and out of existence, the pieces dance across the board as the girl plays out the Scholar’s Mate, also known as the 4-move checkmate. The maneuver repeats, faster and faster, as the girl gazes at the ceiling, captivated.

This is a scene from “The Queen’s Gambit,” a Netflix Original miniseries released on Oct. 23. Created by Scott Frank and Allan Scott and based on a Walter Tevis novel of the same name, “The Queen’s Gambit” follows protagonist Elizabeth “Beth” Harmon’s (Anya Taylor-Joy) journey from an orphanage to competing in international chess tournaments.

Set in the United States during the Cold War era, Beth spends her younger years in an orphanage, discovering chess in the musty basement with custodian Mr. Shaibel (Bill Camp). However, Beth quickly outgrows Mr. Shaibel’s skill, and after she is adopted, she begins playing in state, national and international chess tournaments. As she learns new openings and attacks on the board with sharp intuition and instinct, she spends her nights perfecting her skills by projecting her imagination onto the ceiling. Yet as the young prodigy graces the covers of chess magazines and travels to glamorous cities for tournaments, her sinister battle with substance abuse lurks below the surface.

“The Queen’s Gambit” has exploded in popularity around the world with chess grandmasters and unfamiliar newbies alike. With consultants like Russian grandmaster and world champion Garry Kasparov, the 7-episode series maintains a realistic portrayal of the chess world with games adapted from real-life matches.

While mainstream media has long deemed chess to be a slow and passive strategy game, this show proves otherwise. Armed with fast-paced screen cuts and heart-thrumming music, even a silent game of chess is sure to get the audience’s adrenaline pumping. The camera is focused on the players and the players’ faces for most of the time rather than the board, an artful camera decision that adds life to the intense games.

What makes the show truly stand out is its refreshing take on female autonomy. Beth’s character is written the way male characters are traditionally constructed by male creators; she is ambitious and success-driven, surrounded by men whose primary purposes are to further her story, and is often likened to a Van Gogh-Esque “tortured genius,” a role almost solely occupied by male characters in television.

Furthermore, Beth isn’t confined to the nerdy chess player stereotype. She is unafraid to express her sexual desires and unashamedly pursues relationships, all without taking her eyes off the chessboard. In television, women are often characterized by their sexual lives in a way that dominates any other trait they might have. Beth’s character defies this norm; her romantic pursuits and ambition in chess are distinct, defining her as a strong character of her own right without the need for men to support her.

“The Queen’s Gambit” is an extraordinary story of struggle, independence and redemption.

Visually, the costume and set designers of “The Queen’s Gambit” capture a stunning portrayal of the 1960s. With Beth’s house decked out in brightly patterned wallpaper and floral bed sheets, viewers are transported back to the age of flamboyant grandmillennial-style decor.

A more subtle yet impactful design choice is Beth’s wardrobe; from checker-print pieces that resemble a chessboard, to expensive dresses straight from a high-fashion magazine catalog, Beth’s fashion choices solidify her position as a confident and powerful woman who is unafraid to express her femininity in a male-dominated field.

“The Queen’s Gambit” is an extraordinary story of struggle, independence and redemption. A young orphaned girl, against all odds, harnesses her intelligence to rise to the top of the highly competitive world of chess. Even after she blunders, turning to excessive amounts of alcohol and drugs to cope with loss, she finds her way back to her chess pieces for the endgame.

To anyone looking to explore the world of chess through a cultured and intricately detailed show, or simply those searching for a satisfying story with complex characters, “The Queen’s Gambit” is for you. And once you finish, you’ll be feeling the urge to take to the chessboard and pick up a pawn yourself.

“The Queen’s Gambit” is available as a limited series, and can be viewed on Netflix.