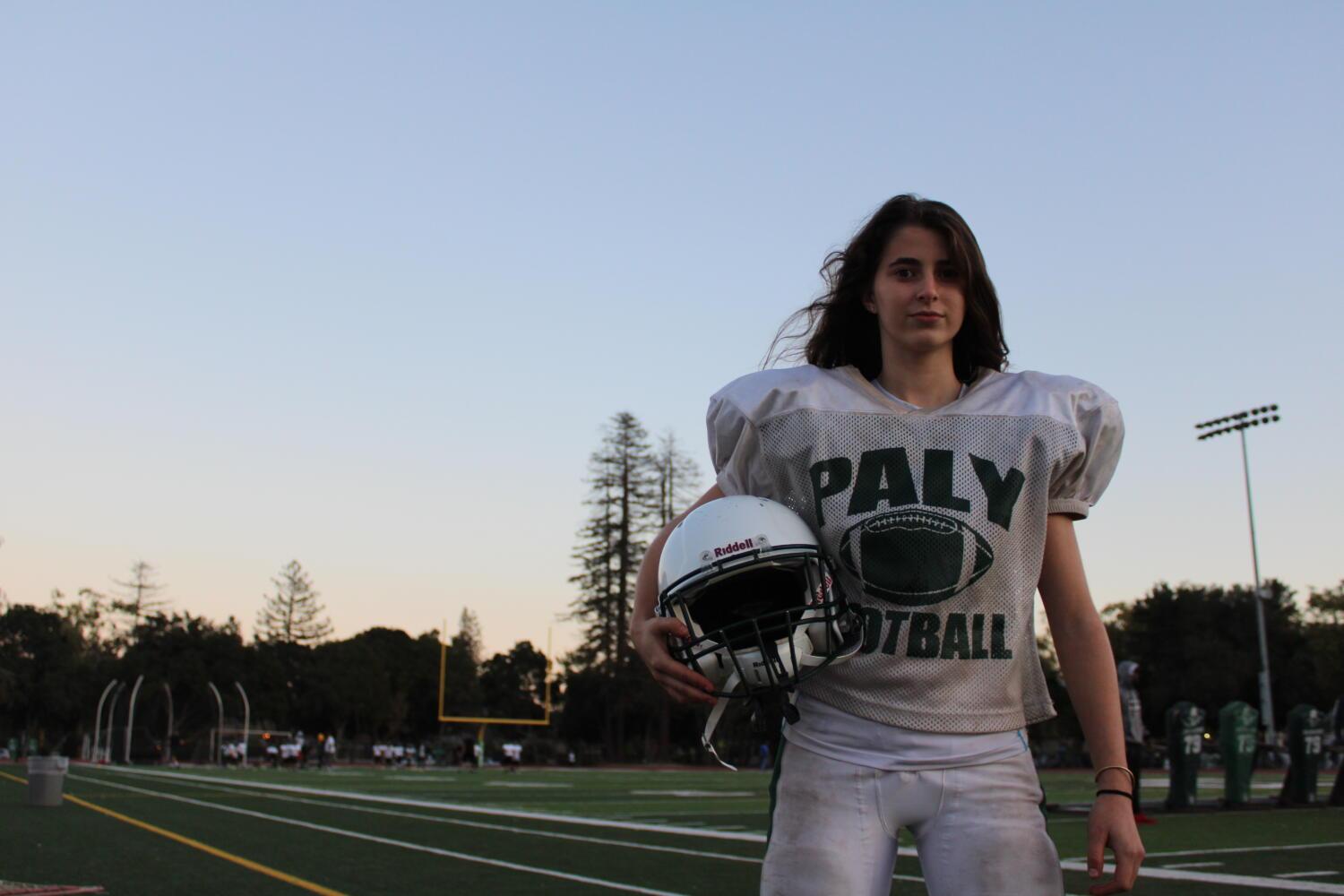 GRIDIRON GIRL — Palo Alto High School freshman Lara Saslow poses for a photo after her football practice. The team practices after school Monday through Thursday, and play games on Friday. “Girls wanting to do it [football] should definitely go for it,” Saslow said. Photo: Ines Legrand

It’s difficult to pick out Palo Alto High School freshman Lara Saslow from the sea of white football helmets lined up on the sideline listening to the coach. But once the whistle blows to end practice and the players begin to jog back to the locker room, she takes off her helmet and her long, brown hair spills out. Then, the stark difference between her and the rest of the Paly junior varsity football team becomes clear — she’s the only girl.

But it’s not until you speak to Saslow that you realize she’s not out of place. Rather, she’s exactly where she belongs.

When Saslow joined the JV team in August, she became the only girl to lace up her cleats for a Paly football team this year. However, her actions are just part of a much larger movement occurring in locker rooms and football fields all over America.

“She has friends on the team, she likes it, she comes to practice and she’s involved… There’s kids that have already quit, so she knows what it takes.”

In the 50 years since Title IX made it illegal for high school sports to discriminate based on gender, there has been a long-term trend of women joining previously all-boys football teams, and Saslow is part of it.

One of the movement’s biggest breakthroughs occurred during the height of the coronavirus pandemic, when Vanderbilt soccer-goalie-turned-kicker Sarah Fuller became the first woman to play in a Power 5 football game.

And while we have yet to see a woman make a National Football League roster, changes are also being made off the field at the professional level, with female coaches and referees becoming a common occurrence at NFL games.

Saslow doesn’t spend too much time concerned with the broad view, however. Her ultimate goal is not to make a political statement, nor to call attention to herself. It’s also not to help inspire generations of future female Paly athletes who are considering joining the football team — although there is no doubt that she will.

“At first, the team obviously noticed that I was a girl and different. I think now they’re used to that and just treat me the same as the guys.”

After finishing middle school, Saslow said she wanted to try out a new sport.

“I found out about football because of my friends,” Saslow said. “But then I just really enjoyed kicking.”

Saslow quickly discovered that kicking field goals was something she could practice easily and often, so she spent the summer training every day.

It was then that she decided she wanted to join the Paly football team once she started high school. Saslow’s family supported her desire to kick for the team, with their main concern being for her physical safety.

“Realistically, Lara is on the smaller end of the scale,” Scott Saslow, Lara Saslow’s father, said. “I think the concern was 100% safety related, not like, ‘Oh, you’re gonna get teased’ or, ‘The boys won’t accept you.’”

However, Lara Saslow’s family took comfort in the fact that there has been an increase in protection for youth football players, including improvements in the technology of Paly’s helmets.

With the added consideration that Lara Saslow would be mainly kicking and therefore would be less susceptible to frequent hits, the family agreed that it would be okay for her to play on the team.

Scott Saslow said that following the family’s approval, his first reaction was to see if the coaches would be open to letting a girl on the football team.

“[The team] is open to everyone. The hard part is making the decision to play.”

“I reached out to the coaches over the summer … and they were amazing,” Scott Saslow said. “They wrote right back and were so encouraging. … I was really impressed that the coaching staff were open to it and were really supportive.”

JV football head coach Jason Fung said that when he received Scott Saslow’s email, he was open to the idea of coaching Lara Saslow.

“[The team] is open to everyone,” Fung said. “The hard part is making the decision to play.”

When she first joined the team, Lara Saslow said that she was nervous about being the only girl on the team and the challenges that might come with it.

“At first, the team obviously noticed that I was a girl and different,” Lara Saslow said. “I think now they’re used to that and just treat me the same as the guys.”

According to Fung, Lara Saslow didn’t have any problems building relationships with her teammates.

“She has friends on the team, she likes it, she comes to practice and she’s involved,” Fung said. “She hasn’t quit yet, that’s a big one. There’s kids that have already quit, so she knows what it takes.”

Lara Saslow said that the coaches have been encouraging and supportive so far.

“The coaches were great, they definitely want me to succeed and they’ve helped me a lot,” Lara Saslow said. “The whole way through, they’ve treated me the same as everyone else.”

“I don’t believe she’s doing it on behalf of female rights or for a social cause. That’s a great side benefit, but my sense is she’s just an independent kid and she’s not afraid of challenges.”

So far, Lara Saslow hasn’t kicked in a game.

When asked if she will soon, Fung explained that it’s up to her consistency in practice, and whether she can be relied upon to make a field goal in a game.

Lara Saslow may have to wait another year or two to play under the Friday night lights with the varsity squad — she hopes to play all four years of high school — but until then, she is content with working hard to earn her spot on the JV team.

But according to her father, Lara Saslow isn’t deterred by the difficulties of being a female player in a predominantly male sport.

“I don’t believe she’s doing it on behalf of female rights or for a social cause,” Scott Saslow said. “That’s a great side benefit, but my sense is she’s just an independent kid and she’s not afraid of challenges.” 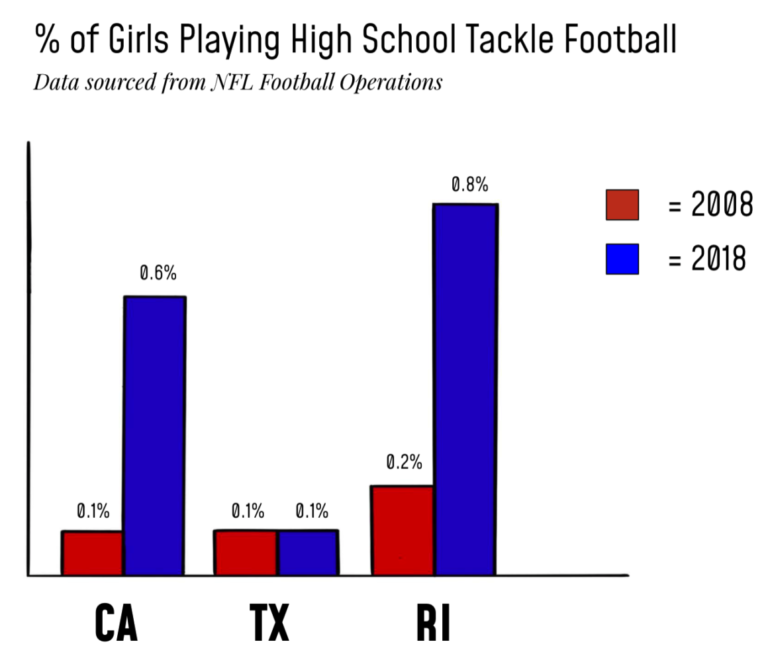