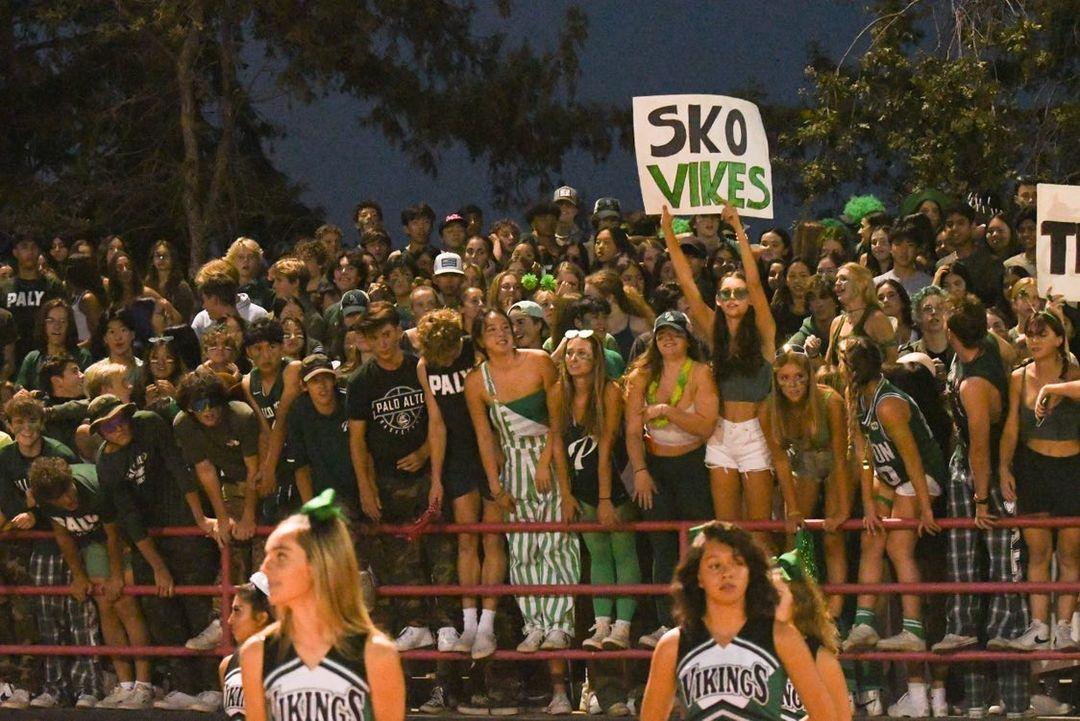 While I am an editor-in-chief of Verde Magazine, my opinion does not necessarily reflect the opinions of the staff.

On Friday, Palo Alto High School played against its rival, Henry M. Gunn High School, in their first football matchup in 12 years. As expected from any rivalry game, large numbers of both Paly and Gunn students, including myself, showed up dressed in green and red, respectively, to watch.

In the fourth quarter, with around 12 minutes of playing time remaining, Paly students flooded into the Gunn student section. Paly students gathered in one section of the stands to start the classic “sko Vikes” chant, and promptly left the Gunn section.

The game was canceled with five minutes to go for “sportsmanship and safety concerns,” according to The Campanile.

Why? Because Paly students did nothing wrong.

Paly students should not be punished for events that could have unfolded, but didn’t.

But, the reality is, we did not strike our friends. Even though we belong to different schools, Paly and Gunn students have grown up in the same neighborhoods, attended the same elementary/middle schools and shared family dinners for all of our lives. A large-scale fight between Paly and Gunn would not happen simply because our friendships supersede our rivalry.

I also ask administrators why they want to punish students for something that could have happened, but didn’t? Do we live in the “Minority Report” dystopia where people are punished before they commit a crime or punished simply because of the possibility of committing a crime? No. Paly students should not be punished for events that could have unfolded, but didn’t. Any one-on-one and isolated fights between individual students should be punished accordingly; however, the actions of a few individuals should not lead to the punishment of an entire student body.

While there was no physical violence, some may argue that going to the Gunn section was “unsportsmanlike.”

But, what is the definition of sportsmanship?

The definition proves to be nebulous and subjective. In reality, it is a construct that is defined by culture, experience and tradition. What one generation thinks is unsportsmanlike is different from how another generation feels; in other words, it is arbitrary. Some claim that going over to the opposing side during the game and chanting was taunting because Paly was winning 41-0. However, I would counter by saying that this act was not taunting, but was rather a display of intense school spirit.

Because the definition of “sportsmanship” is subjective, as two people in the same setting can have vastly differing interpretations of an event, and nothing dangerous or violent occurred, claiming Paly students were “unsportsmanlike” alone is not justification enough for punishment.

To punish us is to lose the moral power to teach us.

Finally, it was at no point made clear to students that crossing the field was prohibited, so unless administration institutes a rule against it after the event took place, there is nothing to make students guilty and deserving of punishment. What rule forbids Paly students from moving to the other side of the stadium? Is this rule clearly defined? I didn’t see any sign on the football field prohibiting this, and I have never heard an announcement about it. If students were not physically harming anyone, being unsportsmanlike or knowingly breaking clear rules, how are they guilty of anything?

This is what lawyers and legal scholars call an “ex post facto” law: a law that is created after an act was committed to punish supposed offenders.

“Ex post facto” laws are prohibited in a variety of legal documents ranging from the Magna Carta to Article 1 of the United States Constitution, and their prohibition is one of the pillars of liberal democracy.

Now, it may be true that a school is not a democracy, and legally, administrators can do what they want within the legal sphere of actions, to punish students, however, one of the most important duties of education in the U.S. is to teach us, the students, how to become responsible citizens who will understand and defend the U.S. Constitution. How can school administrators teach us to be responsible American citizens if they themselves violate one of the bedrock principles of the U.S. Constitution? To punish us is to lose the moral power to teach us.

With this information, I hope that the Paly administration will not discipline Paly students for their actions at the Paly vs. Gunn football game. Paly students did nothing wrong, nothing dangerous, nothing unsportsmanlike and nothing outside of the rules.