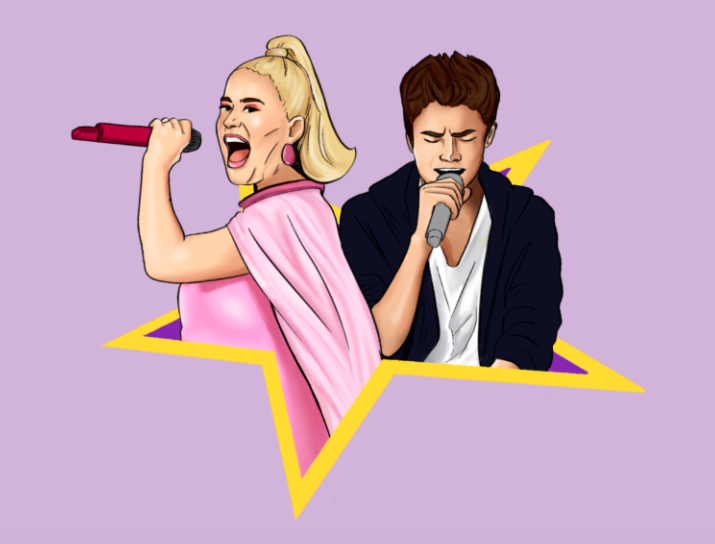 The end of an era: How pop music is evolving with the times

It’s 2012, “Want U Back” by Cher Lloyd is playing on the radio. Life is good. These times are a distant memory, and the world has changed a lot since then. This year especially, we have seen cultural shifts in almost every aspect of the world around us, from the way we interact with technology to the increase in the popularity of sweatpants.

One of the more gradual changes has been pop music. While it is characterized by what is “popular” and has been evolving since the Jazz Age, to our generation, the epitome of pop might be Katy Perry, Meghan Trainor, and Justin Bieber — with the hair swoop. But the 2010s “pop” sound has been transitioning away from the vibrant and upbeat style we know and love.

For me, pop music started losing its magic when I was in middle school. I was spending less time in the car so I wasn’t listening to the radio, and everything on the top charts started to sound the same — this was when I went through my anti-pop phase where I listened to a little too much emo music. It was the first time I ventured away from mainstream music and found my own songs.

The emergence of streaming services like Spotify and Apple Music reshaped the way I consumed music. Not only did it affect my music taste, but the transition from downloading songs from YouTube and listening to the radio to having almost any song at my fingertips revolutionized the music industry as a whole. By drastically expanding the different songs, artists, and genres available, these streaming services have exposed me to explore countless styles and also allowed me to discover smaller artists.

Another game-changer in the music industry has been social media. Along with streaming services, social media platforms have made it much easier for smaller artists to “blow up” without the help of a big record label. TikTok has a major influence on the top charts, and artists like Lil Nas X, Doja Cat, and BENEE gained a lot of their early success through the platform. This new wave of artists has brought fresh influences to the music industry.

So, what is the “new sound” we are transitioning towards? I am looking forward to a more diversified music industry, and I doubt that there is going to be another period where everything sounds the same — at least for me. Though I would never voluntarily listen to “Yummy” by Justin Bieber, I recently found myself circling back to pop music through the “indie-pop” genre.

“Indie” music just means that the songs are made by independent artists who aren’t signed to a label, which makes it super stylistically broad, but there is still a certain sound associated with it. What I think makes indie music as a genre is its creative and experimental essence, which challenges the 2010s pop’s formulaic success.

One of my first encounters with indie-pop was with Conan Gray; I fell in love with the whimsical layering from his vocals and remember how excited I was to see him grow, especially with his recent song “Maniac.” Now, artists can have a lot more connection with their audiences since we can watch them grow their platforms from little YouTube videos or releasing music on SoundCloud to the Billboard Top 50.

Despite indie music priding itself for being niche and underground, it is undoubtedly making its way into the mainstream. It’s no longer a “little secret,” and we have seen many beloved pop artists embrace new styles.

One example is Taylor Swift — she seamlessly evolves with the times. From“You Belong With Me” to her most recent songs, including “illicit affairs,” she has held a special place in my heart since the first concert I attended, on her 1989 tour. Several other artists such as Harry Styles and Tyler, the Creator, have brought an experimental spirit to pop music and propelled this sense of creativity and individuality into more mainstream spaces.

Pop music, as we know it, is not necessarily dying, but changing and evolving. I’m not sure what the next few years are gonna look like, but we can look back nostalgically on the bubbly dance music of the 2010s while still embracing the new era to come.