Ross Road is about as far away as you can get from Sub-Saharan Africa. The oak-covered, two mile stretch of suburban Palo Alto is frequented by the likes of crows and squirrels, while Central Africa is home to the very legends of the animal kingdom, and diverse enough to attract millions of tourists for wildlife viewing and safaris.

Black mamba on the loose

Despite the apparent absurdity of the situation, the caller was credible and stayed on the line. He maintained anonymity, claiming that he had a legal collector’s permit, only valid in Arizona.

“He bought one legally, and brought it into California not realizing that they are illegal in California,” Midtown resident Robin Jeffries says. “Reporters, maybe it was the police, researched this, and it turned out that it was true. You can legally buy them [black mambas] in snake shops.”

Palo Alto is often frequented by rattlesnakes, as well as the occasional mountain lion. On Aug. 31, a mountain lion and cub was spotted near Palo Alto, but little talk resulted. While these animals present danger, rattlesnakes are not unusual, and mountain lion sightings are always recurring news.

“I’ve had them [mountain lions] in my yard,” Palo Alto historian Steve Staiger says. “I went out one morning and half a deer was in my backyard, the front half I believe. Two days later there was a little bit of fur and one bone left.”

However, the absurdity of a black mamba in Palo Alto made the report more sensational, and the scare hit the news at the national level.

“It was like the abominable snowman of Palo Alto.”

Palo Alto Police knocked on each door in the Ross Road area alerting residents of the dangerous snake.

“I am not a huge snake fan, so I was not really happy about this whole idea at all,” says Sue Pelosi, a former Menlo Park resident.

The Black Mamba is the fastest snake indigenous to Africa, capable of moving at almost 10 miles per hour, and can climb trees.

“I remember people saying black mambas were these snakes that were known for climbing up on trees, and dropping down on their victims,” Pelosi says. “It made me pretty nervous just walking around.” 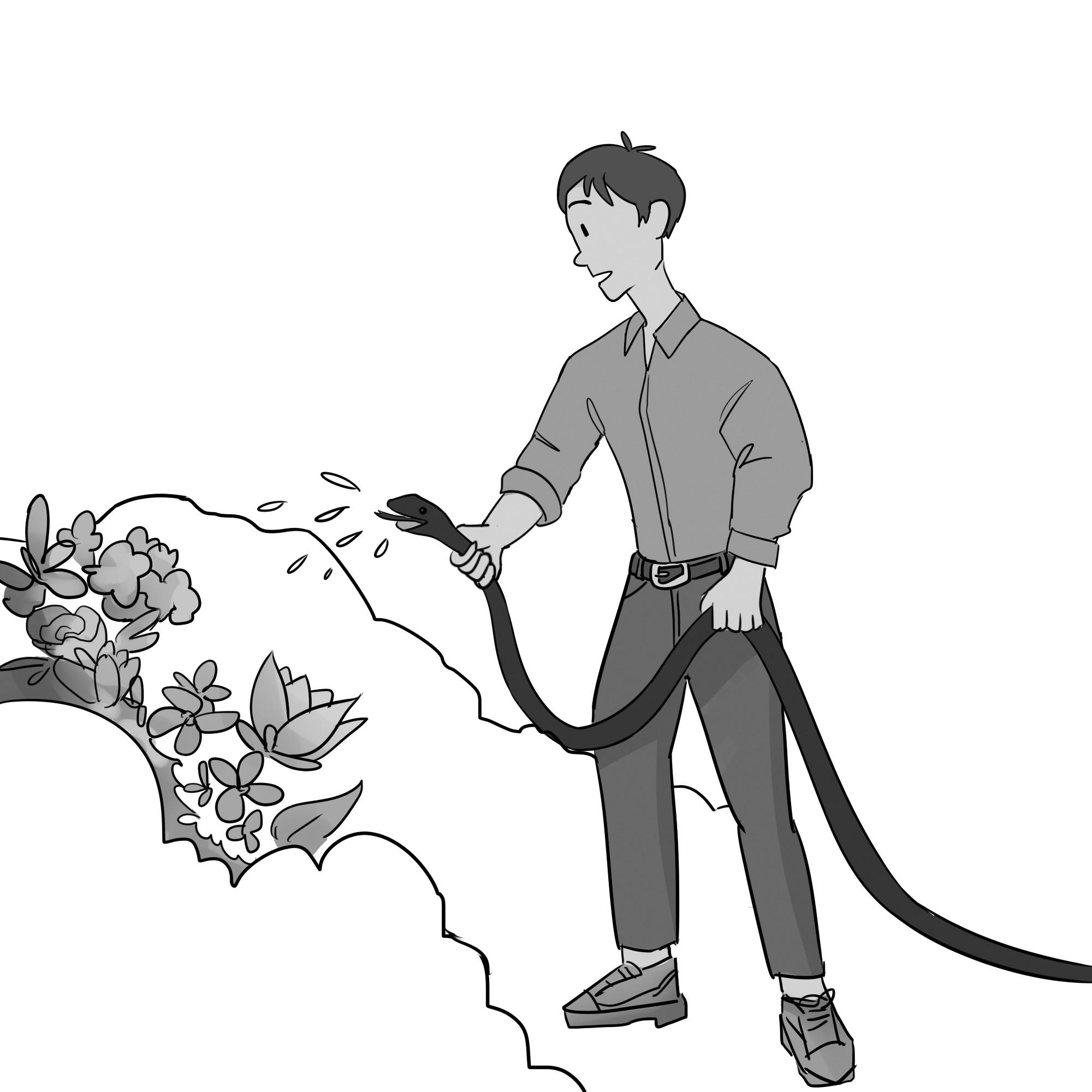 Upon hearing of the reports, Mayor Jean McCown interrupted a city council meeting to alert the community via a televised statement. Following McCown’s address, the panic spread like poison.

Phone lines were flooded with mamba sightings, as hoses and sprinklers were falsely reported as snakes. According to the Palo Alto Weekly, close to 50 people offered their services as snake hunters, or to treat any mamba bites.

In total, the police received over 1,000 calls, including a caller claiming to be the original owner. This was later found to be false, as there were many inconsistencies with the original report.

Despite a lack of concrete leads, the police patrolled Ross Road with special snake ammunition, looking for Arizona license plates, while antivenom was flown in.

Bay Area employees left work early to make sure that their pets were safe at home.

“I was so worried about our cats that I actually drove home and locked them in the house.” Pelosi says, “Better safe than sorry.”

Other residents heard about the report through schools, even though schools like Ohlone Elementary were out of session immediately after the reports.

“Each school called all of the parents” Jeffries says. “We thought really?’ A tropical snake in Palo Alto?’” With no school, parents near Ross Road restricted their kid’s outdoor access. Kids stayed away from bushes and trees, from which the mamba could strike.

“My younger one [child] was so upset about these rules,” Jeffries says. “He was 10, so he didn’t understand that these things could put him in the hospital.”

“They were allowed to go outdoors, but they were to stay away from anything like tall grass or trees,” Jeffries says.

Shortly after the initial report, the “mambaphobia” had scaled down significantly.

“A week later it sort of became a joke,” Staiger says. “It was like the abominable snowman of Palo Alto.” Buzz continued throughout the year, creating an urban legend. One youth soccer team was even named “The Black Mambas,” and the reptile served as the inspiration for a local book.

Today, decades later, most memories of the incident are accompanied with a smile.

“A former student who was in Advanced Placement Music Theory decided to title her final composition ‘Black Mamba Scare,’” Lim says. “I kept her sheet music just for kicks.”

The mamba was also immortalized in clothing.

“I saw somebody wearing a t-shirt saying, ‘I survived the quake, I’ll survive the snake,’” Pelosi says.

A year after the reports, most people had labeled the incident as a hoax. The unlikely possibility of a black mamba arriving in Palo Alto, then surviving outside its natural habitat without any sightings deflated conspiracies.

“It was a hoax, a great hoax, an outstandingly good hoax,” then mayor Liz Kniss said to the Santa Cruz Sentinel in 1994. 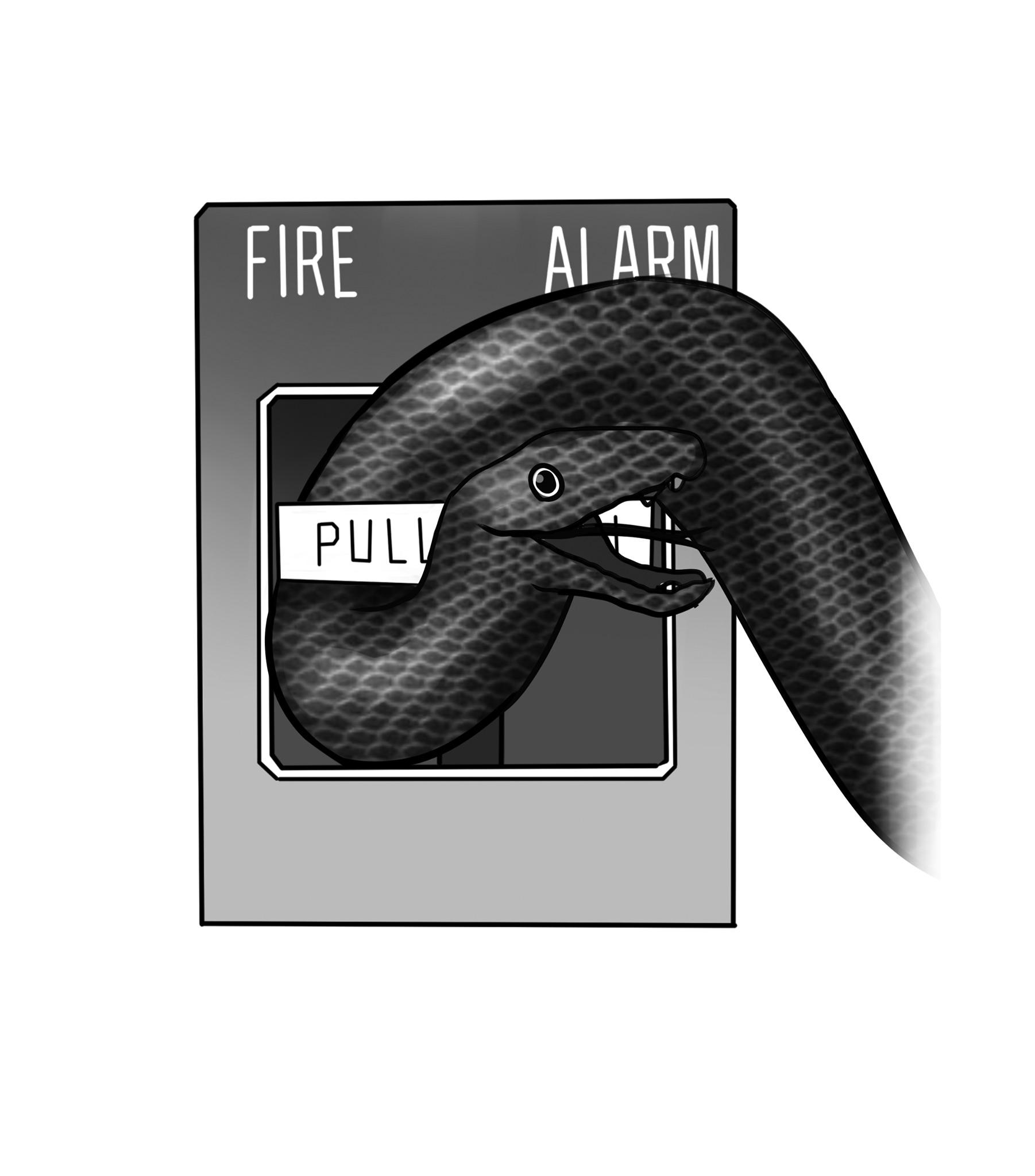 Despite the overall consensus of a hoax, many residents were not so sure.

“I personally do not believe it was a hoax,” Animal Services Department Chief Greg Betts says to the Santa Cruz Sentinel.

Both Betts and dispatcher Diane Wheeler experienced the reports firsthand, and argue that the caller was too knowledgeable to make up the story.

Could the mamba actually survive in Palo Alto? Mild winters, coupled with a readily available supply of squirrels could sustain a snake for many years. The lifespan of a black mamba is undetermined, the longest living known snake reached the age of 11 years old, but experts hypothesize that mambas in the wild could live for far longer. Palo Alto police never came to a conclusion about the black mamba scare. The story was eventually written off as just another elaborate prank created by local school kids with extra free time.

“This could’ve been a prank done by some high school students. It’s plausible,” Staiger says. “Would you choose a black mamba snake?”

To this day, a black mamba could be slithering through the suburbs of Palo Alto.

“There’s no way this could be a prank, it’s too outlandish to be a prank,”Jeffries says.