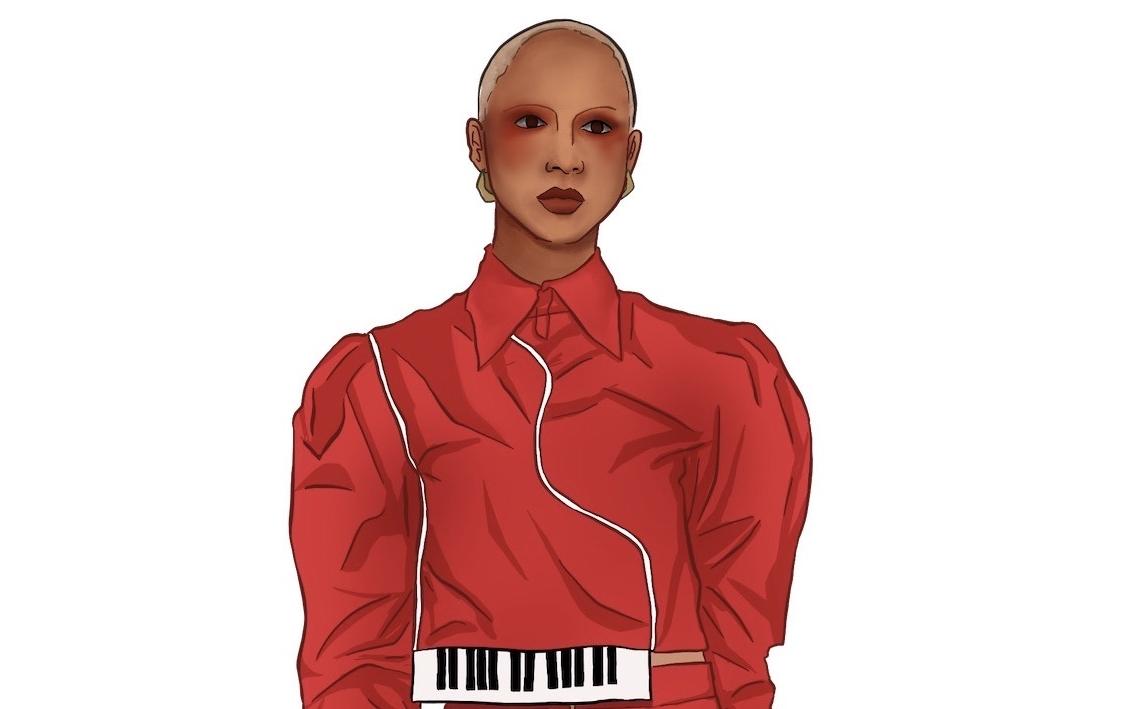 The black savior of fashion: Pyer Moss is rocking the fashion world and beyond

These are 13 unarmed black men killed by police brutality, each of their names listed on the “They Have Names” piece by Brooklyn-based clothing label Pyer Moss. According to an article published by Complex, Kerby Jean-Raymond, founder and creative director of Pyer Moss, created the shirts with the intention of conveying his opinion on the matter.

Pyer Moss has made its mark in the fashion community as the brand that is reclaiming black history and its impact on American culture.

In a community of activism and expression, Pyer Moss offers itself as an example for young artists. Palo Alto High School  junior Amanda McVey is an example of their impact, having found Pyer Moss through online subscriptions and social media. McVey soon became intrigued and started researching Jean-Raymond’s work with Pyer Moss.

In this past New York Fashion Week, Pyer Moss revealed its final collection, “Sister.” The show tells the story of Sister Rosetta Tharpe, a queer black woman who invented the legendary music genre of rock and roll. Through Tharpe, Jean-Raymond strove to portray the importance of black women to American culture.

“What I aim to do is to make disenfranchised people, black people, and minorities and women, know and understand how important they are to this thing called America right now,” Jean-Raymond said in an interview with the Associated Press.

Jean-Raymond worked with artist Richard Phillips, an exonerated black man who spent 45 years in prison due to a wrongful conviction. In the prison cell, Phillips made photorealistic landscapes and portraits that are now featured in the “Sister” collection.

Outlines bearing the semblance of a guitar, black and white tabs depicting piano keys and allusions to Phillips’ artwork were only a few of the motifs seen throughout the show.

Pyer Moss uses the runway as a performance that draws the viewer past just simple fabrics and brings them into the story. The “Sister” collection began with an ensemble of band members accompanied by singer and record producer Brent Faiyaz. The musical number was followed by author and speaker Casey Gerarld who spoke about the 400th anniversary of the first slaves arriving in North America. The runway concluded with a tribute to both Tharpe and guitar legend Jimi Hendrix.

“It’s the creative process of any level of fashion that makes it art.”

According to Jean-Raymond, this form of multi-dimensional show is rare within the fashion community.

“I look at this as an art project, and I think the success of it is bringing people closer to me than trying to assimilate into whatever else people are doing,” Jean-Raymond told AP.

Pyer Moss has not only made a statement among popular fashion brands, but it has also given a new inspiration to anyone piecing together an outfit.

“He [Kerby Jean-Raymond] inspires me to work hard and be the best version of myself so I can make a better world through my art,” McVey says.

For many Paly students, fashion can offer an alternative form of self-expression. As high school coincides with the formative years of adolescence, teens yearn for a way to stand out and express themselves. For junior Marina Buendia, clothing serves as a connection to her inner self.

“I’ve gone through many stages of fashion and throughout all those stages clothing has been a very personal thing for me,” Buendia says.

Though many consider the runways filled with haute-couture and frivolous, undecipherable clothes to be the only example of fashion as an art, others would disagree. McVey has designed clothes ranging from runway pieces to simple school outfits. For her, fashion is an art no matter how and when one wears it.

“It’s the creative process of any level of fashion that makes it art,” McVey says.

Michaela Seah, Paly junior and editor at Anthro, the school’s social activism magazine, finds that clothing has long been used as form of activism, whether purposeful or not.

“All art, including fashion, can help spread awareness,” Seah says. “I also think that fashion can be used to break certain gender roles and stereotypes, especially for the LGBT community.”

Using his own clothing as a form of activism on one of the most widely-watched fashion events of the year, Pyer Moss communicates to the LGBT community the importance of activism on the red carpet.

According to Seah, this unapologetic outward expression of both activism and identity can inspire curious teens.

“It [fashion] can allow you to experiment with what you’re comfortable with the public seeing,” Seah says. “You can try out these new identities, try out these different types of aesthetics and see if they really fit you as a person and if you’re okay with people seeing that.”

Stanford University Professor of Art Nancy Troy, says that clothing has been the patchwork of identity throughout history. Even prior to the creation of the fashion industry, clothing was a symbol of status. Who wore what clothes and the way they wore them was a signifier of class.

According to Troy, this concept of clothes as a form of representation is both modern and universal among all cultures and dimensions of identity.

“I think the clothes have a lot to do with the creation of gendered identities, ethnic identities, but many other kinds as well,” Troy says. “We think about fashion there and I think those maybe are used to accentuate those aspects of clothing the performance of identity.”

“Feminist” fashion: Put your money where your clothes are

How ironic: Self expression through vintage fashion trends

From fabric to fashion