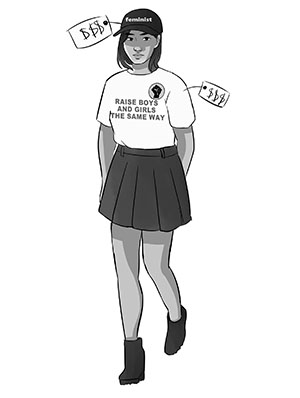 “Feminist” Fashion: Put your money where your clothes are

When Donald Trump called Hillary Clinton a “nasty woman” during the final 2016 presidential debate, it was as if vendors around America had won the lottery. Within hours, mugs, T-shirts, pins and hats were on sale, demanding the money of any person ready to feel “empowered.”

While some of the brands promoting this type of merchandise were donating the proceeds to actual women’s rights organizations, others were just trying to make money off of the latest political trend of the day. It’s nothing new for the fashion business to capitalize on every trend they see, but when it comes to social issues, it undermines the cause and disempowers marginalized communities.

“Fashion has the ability to play a major role in social issues,” says Palo Alto High School junior Darrow Hornik, who is deeply interested in fashion. “I think that businesses and designers that do make and sell these pieces should donate the profits to an organization that supports the issues for which they are speaking up. Especially in today’s political and social climate, it is gravely important that the organizations … are receiving donations.”

Treating  feminism, LGBTQ+ rights and anti-racism as mainly fashion trends will ultimately only hurt us. There needs to be tangible solutions and progress towards equality, instead of the commercialization of important social issues. However, I still see my peers at Paly wearing shirts that say “Raise boys and girls the same way” and “This is What a Feminist Looks Like,” looking informed but not contributing anything to the movements.

Many popular teen brands like Forever 21 and Brandy Melville make outfits about trending social issues, and make money off of it. To combat this, we need to make concious decisions about where we shop and what brands we associate with.

One of the most recent examples of protest was seen just before the Los Angeles Pride Parade. When the organizers of the event announced they would be rebranding the event to be more like a music festival than a parade, there was backlash accusing LA pride of commercializing the event instead of appreciating LGBTQ+ community. #NotOurPride trended on social media, and finally the organizers reversed their stances and made the parade similar to the years before. This shows the power of the people, and is an example of how consumers can stay morally aware, which I think everyone should do.

If these social clothing brands want to actually help, they should be donating their profits to organizations such as Planned Parenthood, ACLU or The Black Lives Matter charity, which all work to help the marginalized communities that are supposedly supported by the phrases on the merchandise.

“I personally love that the [fashion] industry is recognizing current issues, and is willing to take a public stance on it … but honestly, I feel like they could do a lot more,” says Paly sophomore Alicia Kao, who has been interested in fashion since  shestarted high school. “Actions would better impact society and would directly affect the lives of more people, instead of fashion designers remaining in their ‘privileged bubble.’”

If we commercialize crucial social issues, we risk only talking about those issues when they surface on mainstream media instead of making plans to move forward with greater momentum.

With the way the world is going right now, it seems that feminism and other social issues are just words for whoever has the most feminist merchandise — someone who has the money to spend on social trends.

In the book “We Were Once Feminists”, author Andi Zeisler, a creative director of the feminist non-profit company, Bitch Media, discusses the same issue of commercializing serious social issues. “Consumer or celebrity feminism is a label that can be put on and taken of when it’s convenient,” Zeisler explains in her book.

Many brands have already started to see the issue in commercialization, and I commend them for taking a stand. Recently, Dior launched it’s “We Should All Be Feminists” t-shirt on the runway, up for $750. After receiving slight backlash for making feminism seem like a fashion trend, Dior announced it would be donating all the proceeds from this T-shirt to Rihanna’s charity. Other smaller brands, like stores on Etsy and Feminist Collective donate either all or a significant amount of their money to Planned Parenthood and other charities.

Especially with the new Trump administration everyone should try to stay away from brands that promote social issues just to make extra money. Consumer inactivism is just as dangerous as commercial inactivism. Make sure your money is going towards helping the cause that you actually care about.