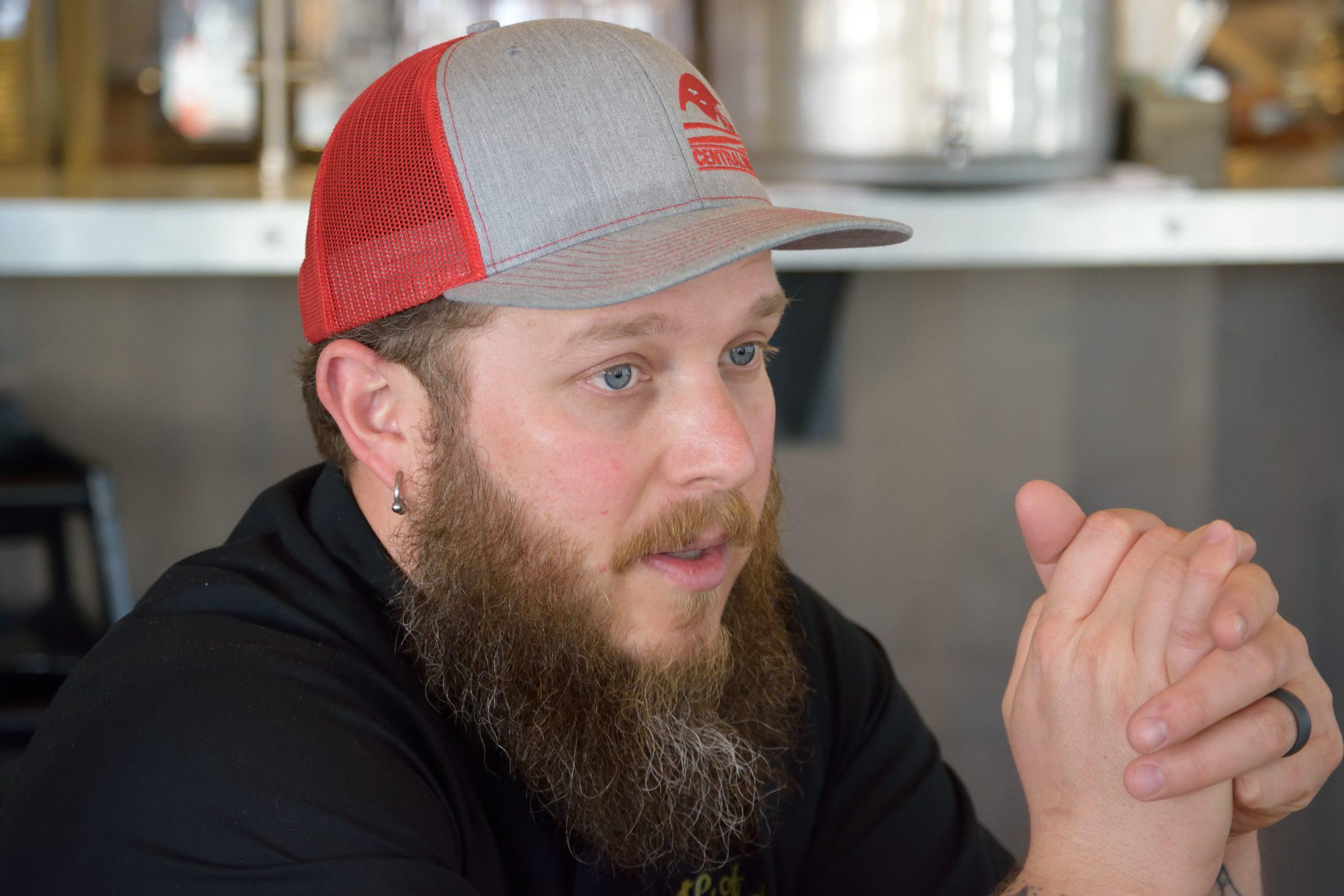 Lars Smith (Paly class of 2002) is the co-owner of State of Mind Public House and Pizzeria. He started the restaurant as a place for people to relax and interact with others in the community. “We’re really passionate about the communal seating and the counter service” Smith said. “But moving forward we’re probably going to have to reevaluate that.” Photo by Sasha Poor

State of Mind: Local restaurant’s persistence through a pandemic

As we drove up to State of Mind Public House and Pizzeria in Los Altos on a Friday night in February, the restaurant’s bright lights were visible even from the parking lot. Chatter filled the air as children weaved between the long communal dining tables.

Now, with shelter-in-place orders in effect, the restaurant looks drastically different. The vibrant, lively feeling has disappeared, with no patrons inside and food delivered to customers’ cars in the parking lot.

One of many restaurants trying to navigate the COVID-19 pandemic, State of Mind is fighting to stay open and maintain its unique atmosphere — a difficult feat in the midst of multiple shelter-in-place orders. To do so, it has had to change its approach to serving customers as well as the food itself. Rather than having counter service and communal tables, servers deliver take-out orders to patrons’ cars with minimal interaction.

“It’s all kind of touchless and contactless, which is a really weird thing because that’s not why we get in the restaurant business,” said Lars Smith, co-owner and a Palo Alto High School graduate (Class of 2002).

Smith has also had to lay off about half of the restaurant’s staff simply because there is no work for them to do. The business has lost around 30% of its patronage due to the shelter-in-place order.

“It’s all kind of touchless and contactless, which is a really weird thing because that’s not why we get in the restaurant business.”

The restaurant’s reality has changed from how Smith initially envisioned it. He has had to alter his menu because of ingredients that have become unavailable due to an issue in the supply chain, or expensive ingredients that may not necessarily sell.

State of Mind’s concerns are minimal compared to those of other restaurants. Smith said some of his friends who own restaurants will be unable to reopen them after the pandemic. Luckily, with strong savings and early preparation for the impacts of COVID-19, State of Mind plans to stay open.

“We watch a lot of news and pay attention to what’s going on around us so we … had two to three meetings as owners before the shelter-in-place went in effect to create a plan,” Smith said. “We’ve been working on our takeout online ordering capabilities for about six to eight months before this ever happened just as a way to increase our revenue. So that really positioned us to be in a pretty good place to weather this storm.”

Smith had also planned to open a new location in Downtown Palo Alto this summer, but is now uncertain due to the COVID-19 pandemic.

According to Smith, the city office issuing building permits has been closed due to the shelter-in-place order. He may not be able to submit his renovations plans to get permits, so the restaurant may end up behind schedule.

If Smith does indeed get to open his new pizzeria, Palo Altans are in for a treat. Early in March, before the school closures, Verde visited the Los Altos location and was able to experience State of Mind’s signature food, activities and ambience.

It was a far cry from what we expected — a pub-like sports bar with dark furniture and low lighting. This was not a restaurant designed as a teenage hangout. Rather, every table was filled with parents enjoying their beers and pizza, while their kids explored the arcade in the back of the restaurant.

This family-oriented marketing strategy fuels State of Mind’s success. No matter where you live or what day of the week it is, there will always be parents looking to catch a break and eat out at a place where their children aren’t seen as a disruption.

The arcade in the back was our favorite part of the restaurant. The dimly lit area is made bright with neon-flashing games packed cabinet to cabinet, mimicking a retro arcade. It’s an attraction that will entertain children long enough for their parents to enjoy a few drinks and catch a few innings of a Giants’ game.

Smith says he is most proud of the arcade, and after buying a few machines for his last restaurant, decided it would be viable to create a 90s-style gaming area for State of Mind.

“My brother and I played a lot of arcade games and pinball growing up, and … growing up in the 90s, Nintendo and Sega were huge for us,” Smith said. “We always liked video games a lot and for years I’ve joked around about having our own arcades.”

Like his restaurant decor and activities, Smith’s innovative food is usually exciting and unconventional. Smith came up with the menu with local food and unique combinations in mind.

“I love to eat, drink and read about food so I don’t buy into the philosophy that pizza … or food has to be one thing,” Smith said. “It is a blank canvas and it’s only right or wrong if you think it’s right or wrong, so we’re using what might be unconventional and weird and seem wild, but we definitely are using flavor combinations that make sense together.”

Though the premise is appealing, the food is hit-or-miss, as some combinations don’t always meld as well.

“I love to eat, drink and read about food so I don’t buy into the philosophy that pizza … or food has to be one thing.”

Although teens do not seem to be the restaurant’s main clientele, it provided a fun place for students to relax and get a quick bite to eat. The arcade allows for a return to childlike fun and the food can be good — as long as you know what to order. The pizzas are a great choice for take-out during the shelter-in-place order or for dining after the order is lifted.

We ordered two of their many pizzas: The Ultimate ($23.50) and the Heirloom Goat ($22.50). Both pizzas were satisfactory, and arrived in record time. Though the prices were relatively high, the pizzas were large and the flavors were worth the extra cost.

The Heirloom Goat, with chevre, mozzarella, cherry tomatoes and basil, was like bruschetta turned into a pizza. State of Mind’s gourmet style worked in its favor, bringing a fancy element to an otherwise traditional pizza. This was easily the best item we ordered. 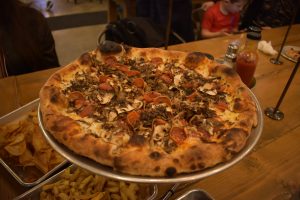 The Ultimate was piled high with mushrooms, tomatoes, pepperoni and mozzarella. While some of the components that made the Heirloom Goat Pizza so tasty were still present, it was slightly overpowered by the amount of mushrooms on the pizza. Despite this, it was a solid order. 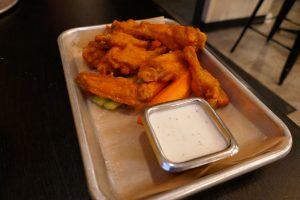 The Traditional Buffalo Wings ($8.50 for six pieces) fit with the distinctive energy of State of Mind. It was cooked well and slightly spicy — which should be expected. However, the carrots and celery that were served under the wings became slightly warm and soggy. 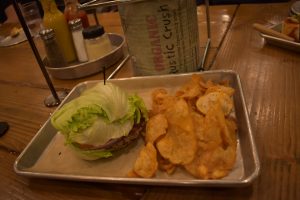 The Impossible™ Burger ($15.50) was one of the few vegan options available, and came in a fresh lettuce wrap, as their traditional buns are not vegan. It was rather bland because the signature State of Mind sauce that adds seasoning is not vegan either, which was disappointing. However, the patty itself was flavorful and cooked well, so the Impossible Burger would likely be a good choice for vegetarians (not vegans) who want to partake in the burgers and fries.

State of Mind’s Jalapeño Balls ($8) are touted as “Almost World Famous” on their menu, and certainly live up to their reputation. They are fried to perfection, with a crispy outer crust and gooey cheese, avocado and chunks of jalapeño on the inside. The smoked cheese is visually satisfying when pulled apart and adds a rich flavor, complementing the spicy bite of the jalapeño. For five relatively large pieces, they are definitely worth the price.

The P(etite) B(reakfast) & Jelly ($11) is one of the most intriguing items on the menu. The dish is served as a chunk of cheese slathered in red pepper jelly, with sourdough bread and almonds on the side. The cheese and bread pair perfectly, but the jelly felt out of place. It is very sweet, and the red pepper does not have enough spice to balance it out, leading to a strange combination of flavors. It is a bold choice if you are feeling adventurous, although we would not order it a second time — especially given the high price point. 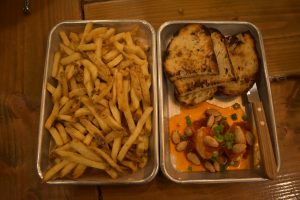 The hand-cut fries ($5.50) were your average fried potato: they were a little soft, and got worse as they cooled. They were a touch too salty, but the addition of ketchup balanced out the flavors. The flavor of the potato itself was a bit bland, overpowered by the salt, so we would recommend going with a flavored version like the cheese or dirty (cheese sauce, bacon, fresno and green onion) fries. 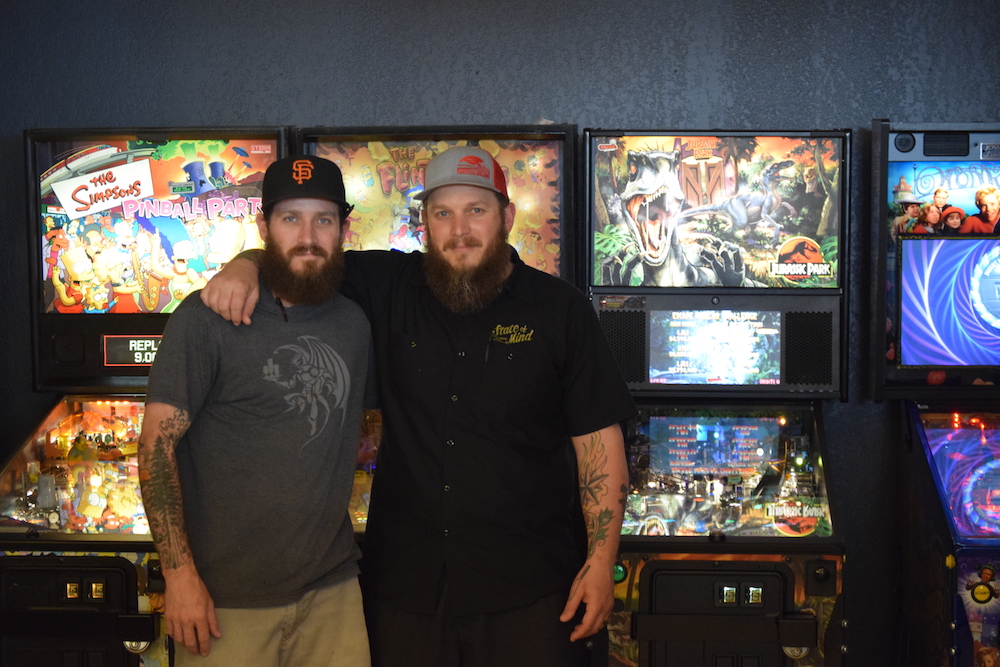 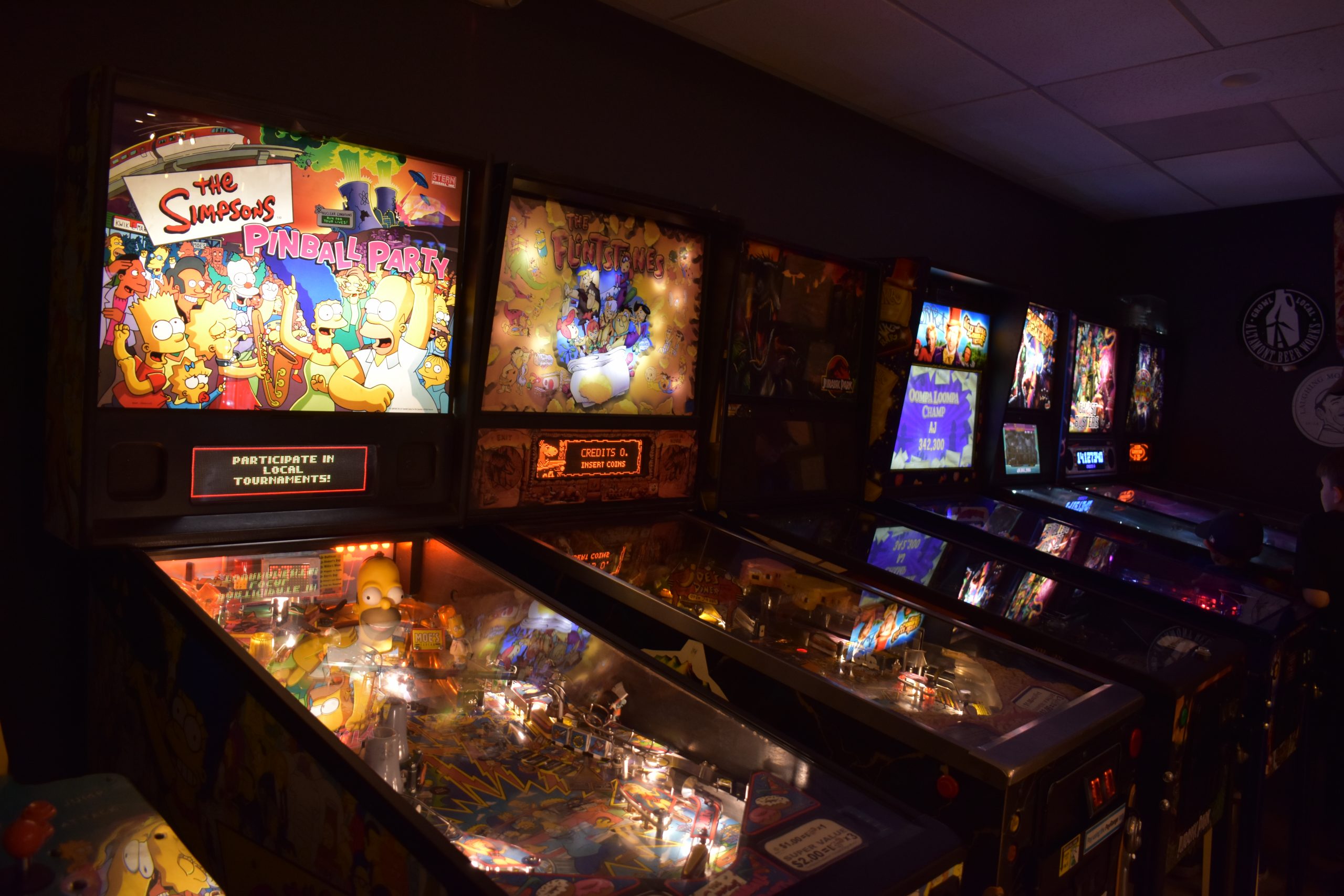 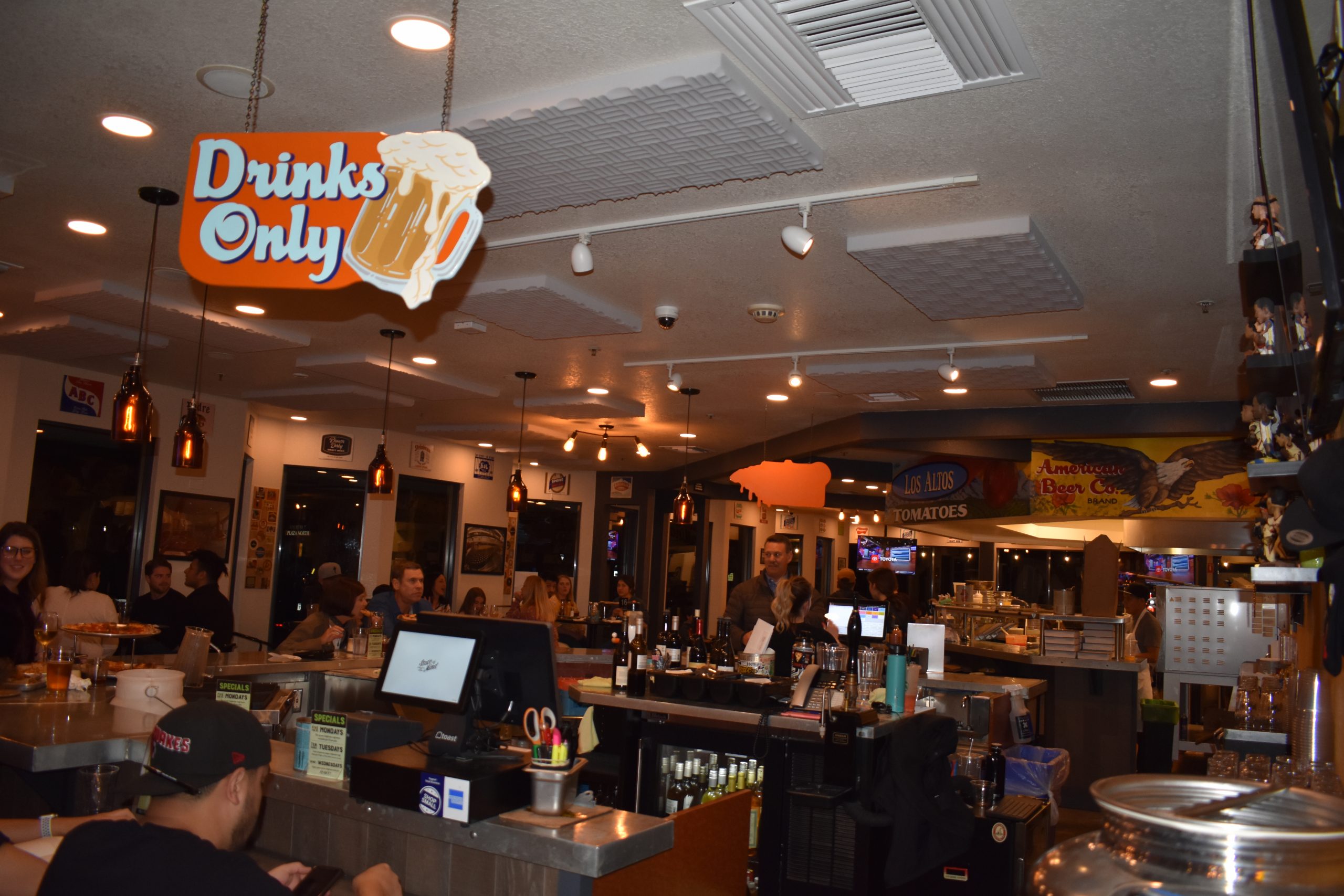 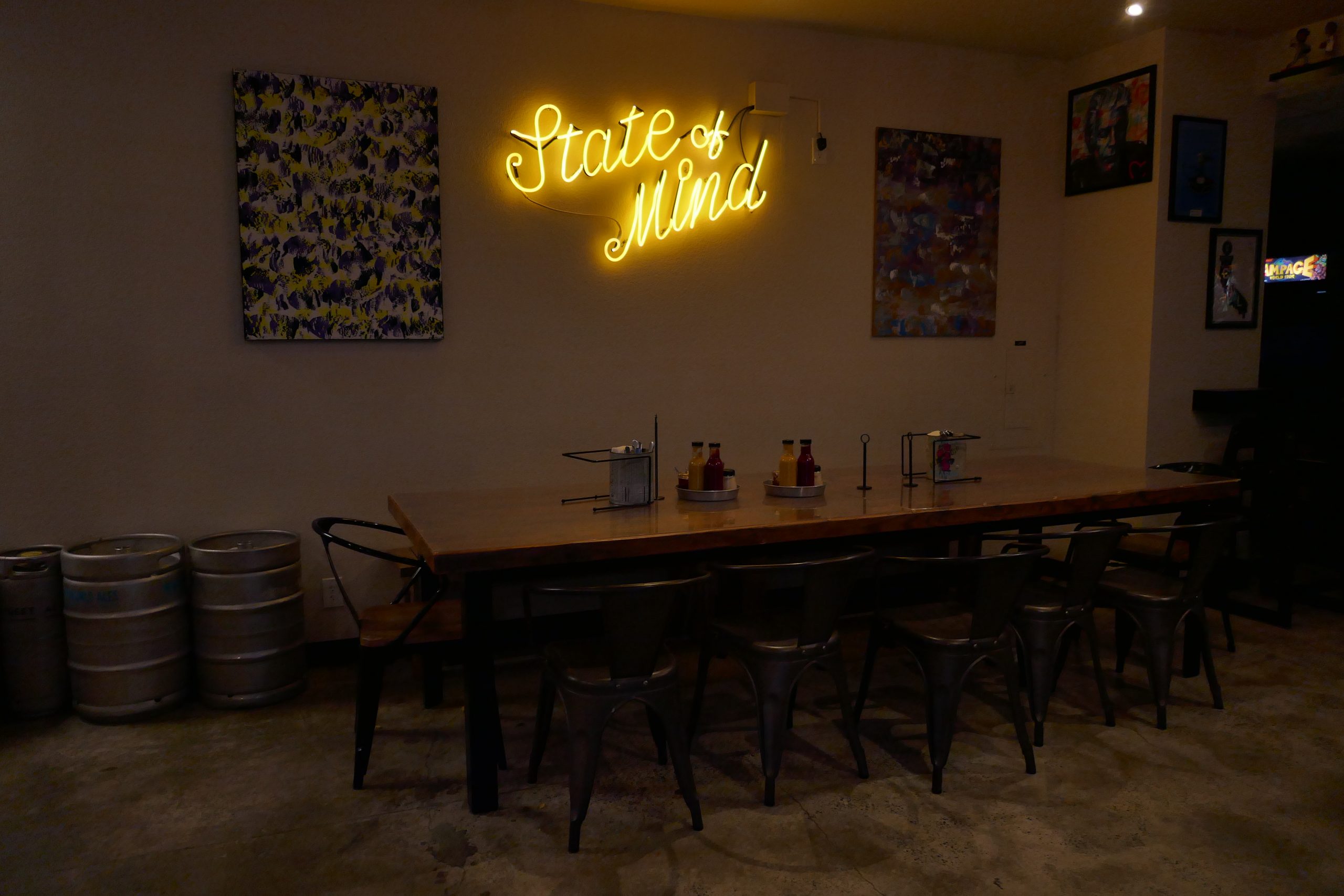 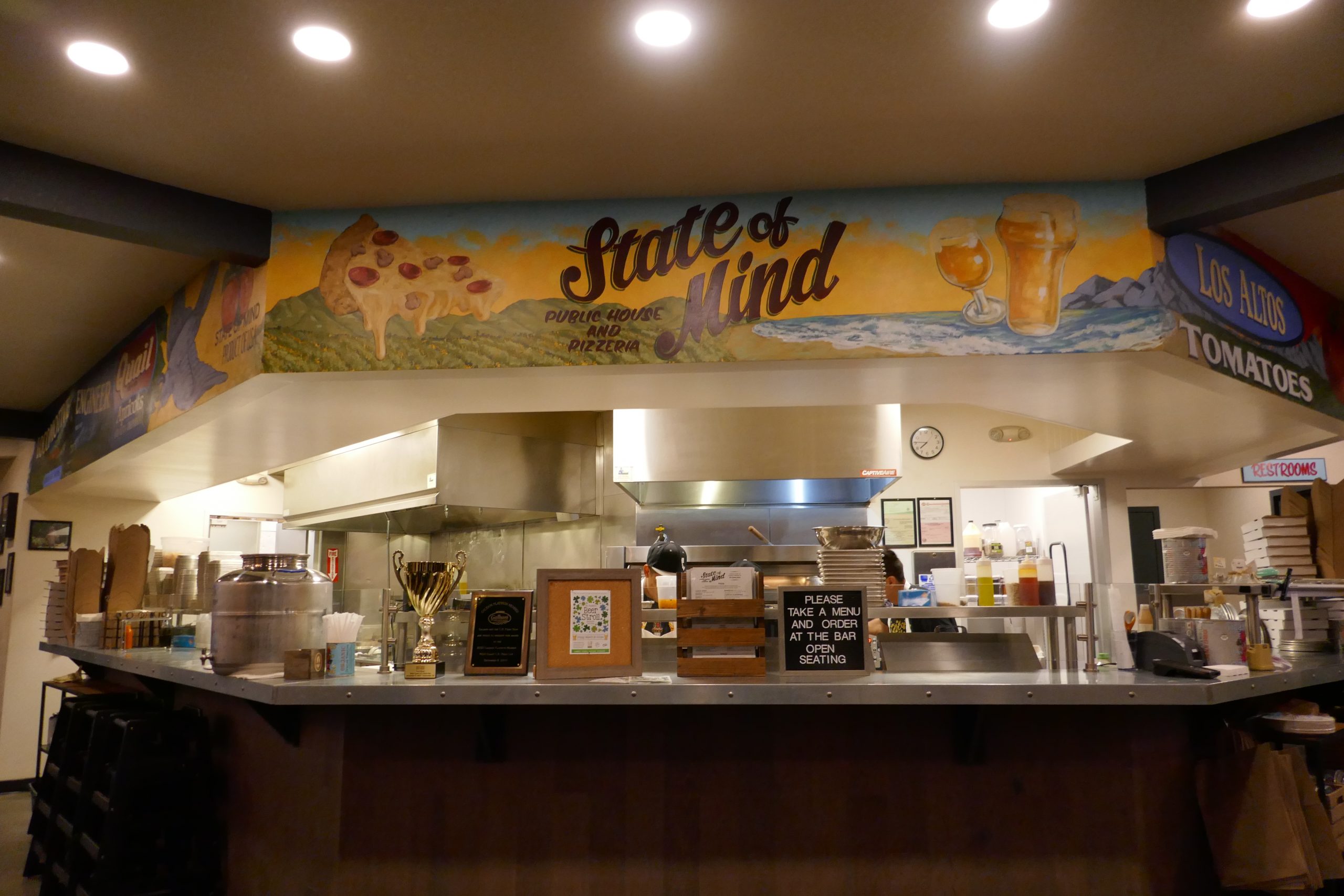 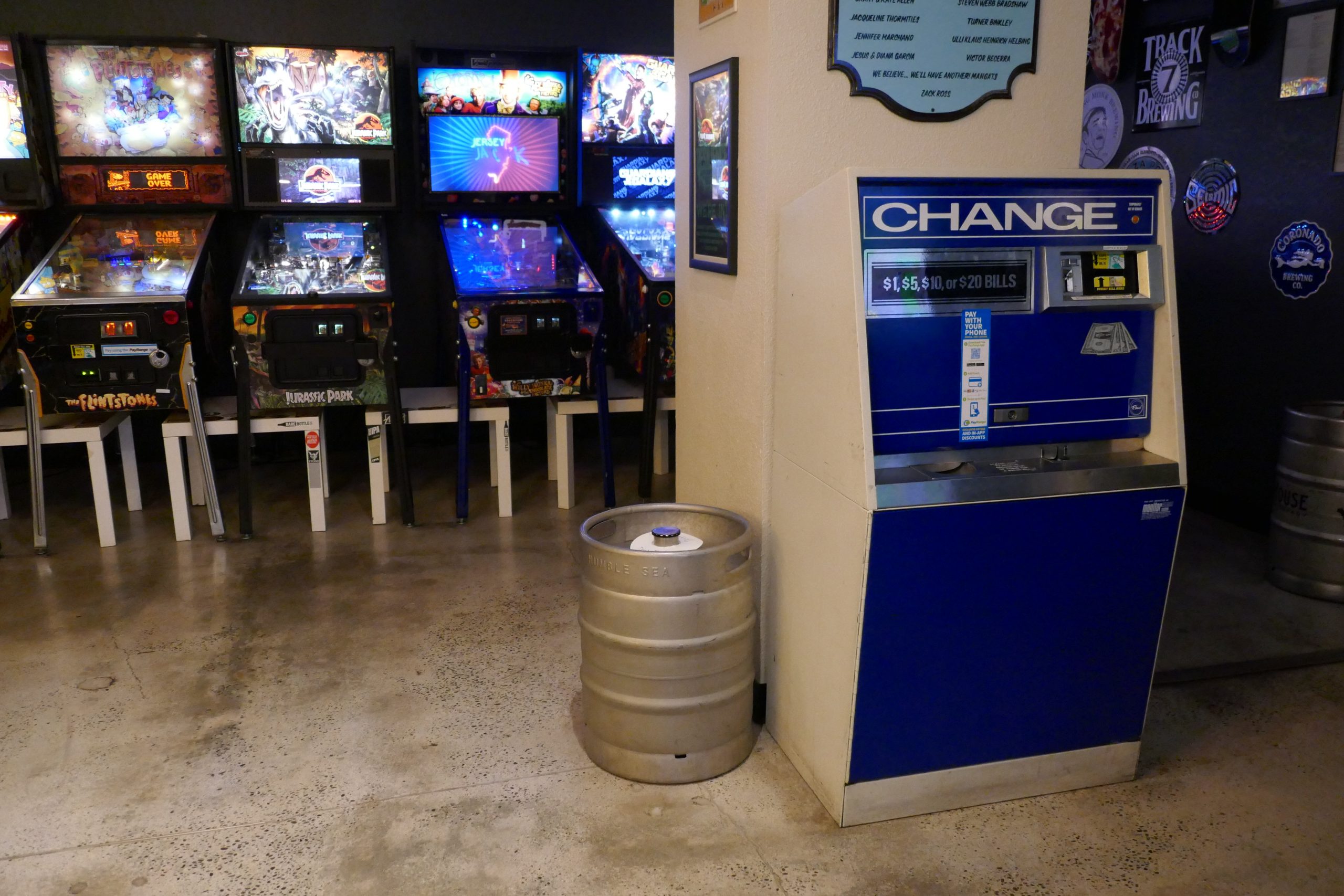 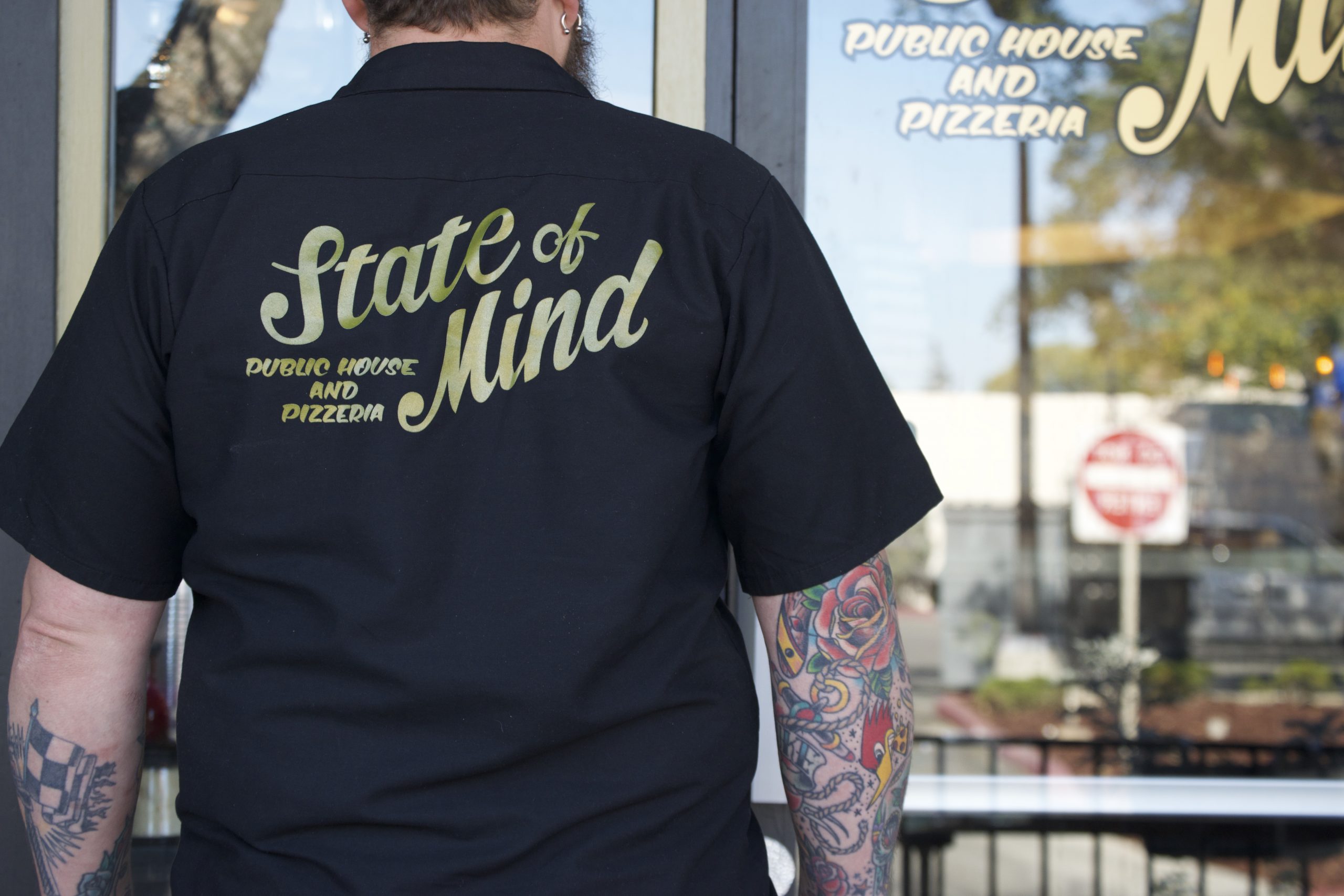