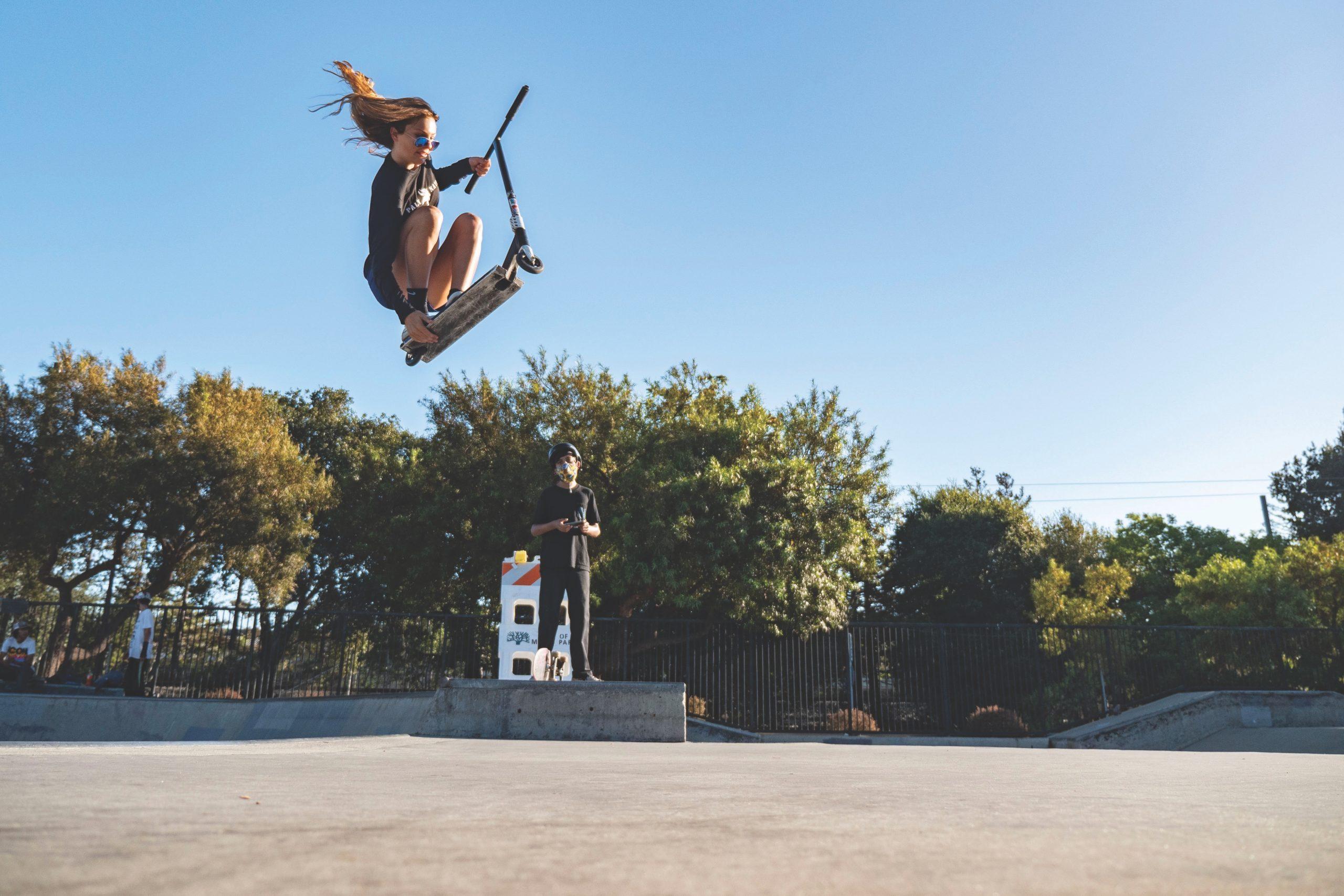 SCOOTERING STAR — Sophomore Delaney Ball flies through the air, riding her scooter as if it were a a magic carpet, hair whipping behind her. “I like how there are no rules, you can be as creative as you would like to and you can always progress,” Ball said. Photo: Sam Kaplinsky

The grating sound of a scooter scraping against a railing comes to a halt as sophomore Delaney Ball lifts her feet off the deck of her scooter, briefly revealing flashes of its bright yellow color. The deck rotates rapidly around before Ball plants her feet firmly on it once again and descends to the ground. She crouches as the wheels connect with the concrete, then immediately springs back up to cruise around nonchalantly. In the few short seconds of the video, it becomes clear why Ball has gained a reputation for her talent and accomplishments in scootering.

After only four years of scootering and only having competed at a scootering tournament once before, Ball was chosen to represent Team USA in the Scooter World Cup.

“It was a big accomplishment for me to be able to join Team USA because only ten members from each country got selected to represent the country,” Ball said. “It was a huge deal.”

While COVID-19 restrictions prevented Ball from having a regular Scooter World Cup experience, she remained enthusiastic about her achievement even with the change to a virtual format.

“Instead of going to Barcelona we had to submit an online video, so it was a lot different, but it was still a huge accomplishment and I was really excited to be a part of that,” Ball said.

Despite the challenges of a virtual format, Ball and her team ended up placing first in the tournament.

“I get a lot of DMs from girls that, I wouldn’t say look up to me, but they watch my videos and say ‘I hope I can do that one day,’” Ball said. “I definitely like to be an example for younger girls.”

Social media has played a significant role throughout Ball’s scootering career. She first took an interest in the sport after watching a YouTube video about it in 7th grade and continued to use YouTube to catalog her progress.

“I became friends with a freshman and an eighth-grader and we started a crew called The Casual Krew,” Ball said. “We filmed a bunch of YouTube videos, and it started getting to a point where I realized I could actually do something out of this.”

Early on in her scootering career, Ball created an Instagram account dedicated to her scootering videos. Soon enough, her posts caught the attention of one of the most prominent scootering companies, Tilt.

“I was super interested in being sponsored by Tilt, so I tagged them in a lot of my posts, and in about two years into me scootering, I got a DM [direct message] from the CEO and the founder and they were interested in having me join their team,” Ball said.

More recently, Ball has started posting clips of her scootering to TikTok, where she has over 75,000 followers and her most popular video has garnered a total of 2.4 million views.

“I’ll film things and I’ll be motivated to land tricks so that I can post them on social media,” Ball said. “I see the positive comments and it just motivates me to keep riding.”

“For now I’m just scootering for fun to hang out with friends.”

Inspiring the next generation

As a result of her large online presence, Ball often receives messages from other girls who see her as a role model.

“I get a lot of DMs from girls that, I wouldn’t say look up to me, but they watch my videos and say ‘I hope I can do that one day,’” Ball said. “I definitely like to be an example for younger girls.”

Though she remains modest about her accomplishments, Ball is paving the way for other girls interested in scootering, a male-dominated sport. At her first scootering tournament, Ball was recognized as the only girl competing out of almost 140 boys.

“At the skatepark, I’m usually one of the only females there, so sometimes you get strange looks or people, when you do a trick, they’ll be super impressed,” she said. “It’s cool but I also wish there were more females in the sport.”

On top of her evident success in the field, Ball is interested in simply enjoying the activity she’s so passionate about.

“Obviously the main goal is just progressing and getting better,” Ball said. “But for now I’m just scootering for fun to hang out with friends.”