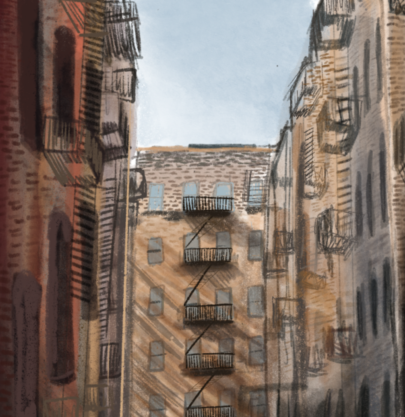 Salvaging the story?: Attempting to amend ‘West Side Story’s’ appropriation

Clotheslines carrying multitudes of colorful fluttering fabrics hang above a narrow alley. Worn-down bricks and rusted metal fire escapes adorn the sides of the compact buildings along with barred windows and graffiti.

As this colorful scene fades out, two young “Puerto Rican” women are seen playfully arguing with each other. Yet, although both of the characters are introduced as Latinx, only one of them is played by an actual Puerto Rican woman. The other? A white woman with a face darkened by makeup.

“West Side Story,” a 1961 Academy Award-winning musical romance film directed by Robert Wise and Jerome Robbins, is a widely praised classic “Romeo and Juliet” spin-off featuring star-crossed lovers living in New York City who find themselves caught in a conflict between two local gangs, one Puerto Rican and the other white.

Yet despite its ubiquity, the film is plagued by controversies surrounding the issues of racial and gender stereotyping, misrepresentation of Latinx people and criticism towards a white author writing about Latino culture.

“I think it’s very important for each of us to tell our story from our unique perspective and lived experience.”

“I do also think the white authorship inevitably limits our perspectives of the Sharks’ [Puerto Ricans’] lives and stories,” Film Composition and Literature teacher Alanna Williamson said. “What was more troubling to me about the original was the white casting and whitewashing of Puerto Rican roles.”

Portraying the Puerto Rican characters in the film, white actors used heavily faked accents and had painted faces while stereotyping Latinos as rowdy and promiscuous. In an attempt to amend these issues from the first film, a new adaptation of “West Side Story” was filmed and released in December of 2021 by Oscar-winning director Steven Spielberg.

Although the overall plot and song lyrics from the 1961 film were left practically untouched, this new version of the classic musical emphasizes the more significant themes of bigotry and race instead of romance and drama by adjusting various characters and settings. Legitimate Latino actors were also chosen to play the characters in the film, this time with no more “brown facing.” Yet, regardless of all these careful changes and resolved issues for cultural authenticity, for some, this increase in representation was not significant enough.

“I think that it would have been great to have a little more diversity,” Palo Alto High School senior Emma Joing said. “I know they really tried, but I think that they could have gone a little bit further.”

Some critics view West Side Story as unsalvageable regardless of the changes since the fundamental problem still isn’t addressed: a white author writing about Latino culture.

“I think it’s very important for each of us to tell our story from our unique perspective and lived experience,” English teacher Kindel Launer said. “ I don’t know if, as a white woman, I could tell a story of a black woman or an Asian woman … But it’s not that I disagree, and it’s not that someone writing to a specific lived experience isn’t telling a universal story.”

In addition, some argue that the stereotypes from the first film, depicting Puerto Rican women as sexual and men as violent, have already shaped how Americans see the Puerto Rican community.

So does “West Side Story ‘21” save its predecessor, or is it all just a useless endeavor? Is this classic Romeo and Juliet story destined to be flawed with cultural controversies?

As one of the first films to integrate Latino characters and culture in America, this negative influence that the film has had on Latino cultural representation may be already too ingrained within society to be erased.

“Media sets expectations and patterns in our heads for how we group people, so having diverse stories about diverse people is hugely important,” Williamson said. “If you’re never represented you also might not feel like you matter.” 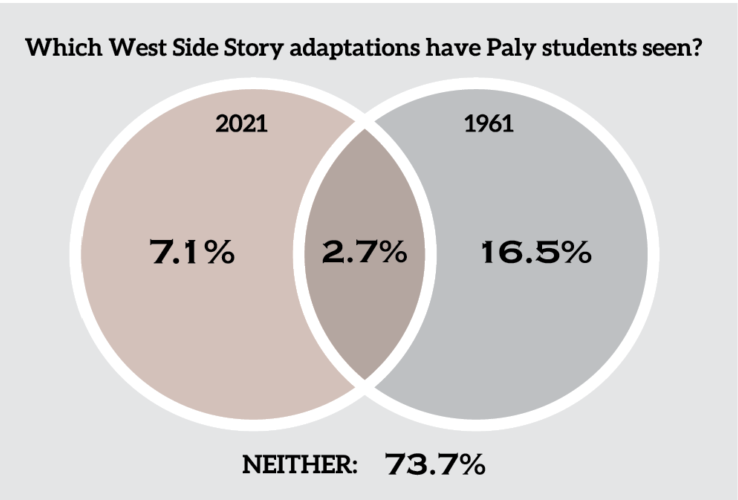 Data presented above is from an opt-in survey by Verde Magazine of 237 Palo Alto High School students and was collected from January 26 to January 31, 2022 through a digital form published on Schoology pages and Verde social media. Responses were anonymous and all questions were optional.