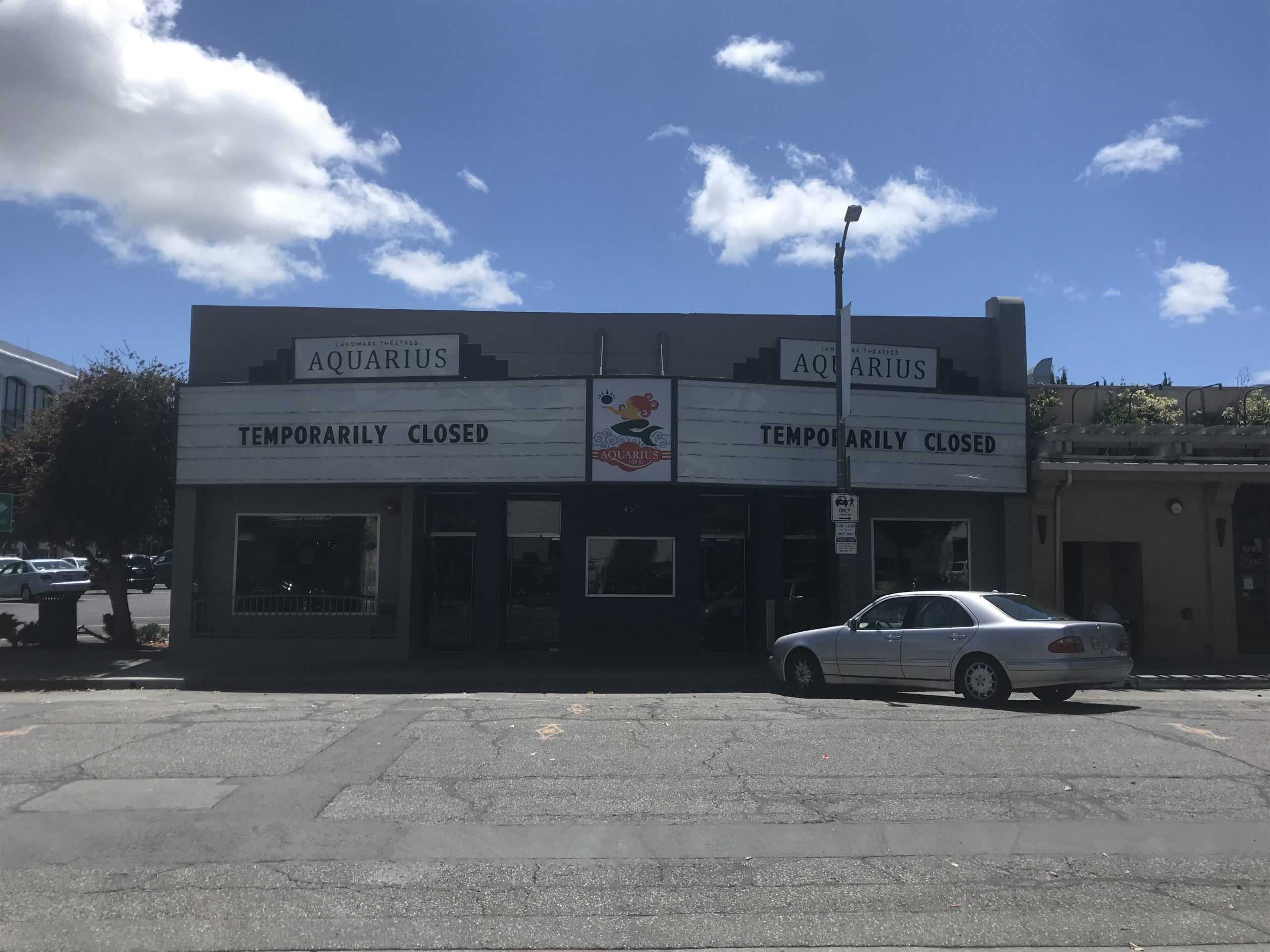 TEMPORARILY CLOSED — From outside its padlocked doors, Downtown Palo Alto's Aquarius Theatre is a somber sight. With only one auditorium, the cozy theater is best known for showing independent and foreign flicks. Photos by Tim Hung

The whiff of stale popcorn and $6 Coca-Colas, the sensation of spine-kicking and immersive surround chatter — uncherished experiences turned fond memories of a lost era. In our current uncertain commercial crossroads, one historic business looks poised to go under: your local movie theater.

Due to the coronavirus outbreak, cinemas across the U.S. have been forced to shut their doors. In an attempt to stay afloat, many theaters have turned to selling curbside popcorn to-go, mirroring the struggles of shuttered restaurants across the nation.

So while it may seem like six-feet social distancing is responsible for threatening a fatal blow to an otherwise healthy industry, in reality, the industry has been on a downward trend for decades.

“Why pay so much to go to the theater when the newest, best films can be seen on-demand, right in our homes?”

“There are fewer and fewer reasons to go to the theater nowadays, regardless of the whole corona situation,” Palo Alto High School senior Adam Hashmi said. “Coronavirus might just be an unexpected catalyst.”

To start, even though a few blockbusters are killing it at the theaters, fewer people are going to the movies overall. According to Statista.com, the number of tickets sold in North America has been in steady decline. An average 18 million fewer tickets have been sold each year since 2002 — a marked decline of nearly 2% per year. And the two lowest-selling years of the last two decades? 2017 and 2019. 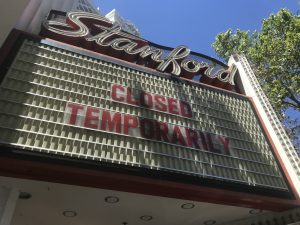 For the year 2019, specifically, the culprit is clear: Netflix.

While the National Association of Theater Owners has insisted the rise of streaming only stimulates more theatrical moviegoing, 2019 was a year without precedent in regards to the caliber of digital features. Netflix received the most Oscar nominations of any company (24) for films like directorial legend Martin Scorsese’s “The Irishman” and emerging talent Noah Baumbach’s “Marriage Story.”

“Why pay so much to go to the theater when the newest, best films can be seen on-demand, right in our homes?” Hashmi said.

Along with taking away crucial talent from the traditional movie industry, through which theaters earn their cut of the distribution, streaming services can provide much cheaper options — $6 per month for thousands of films as opposed to $10 for one viewing. But that’s not to say movie tickets were always this expensive. 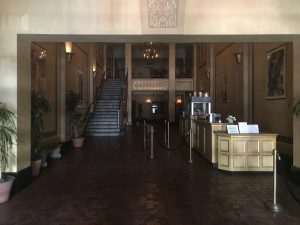 AN EMPTY PALACE — Designed and built in the 1920s as a movie palace styled in neoclassical Persian and Moorish architecture, Downtown Palo Alto’s Stanford Theater is an iconic Palo Alto landmark. It is best known for showing silent films and black-and-white classics from the Golden Age of Hollywood.

According to The Numbers, ticket prices today are 109% higher than they were in 1995 — far outpacing inflation. Furthermore, the theatrical window — the period of time between a movie’s release in theaters and when it is made available for home viewing or streaming —  has decreased from five to six months in 1980 to three months as of 2019.

The skyrocketing price of tickets coupled with the shrinking theatrical window has made audiences more hesitant towards paying a premium for the big screen and more patient to wait to watch their films at home.

“I waited a few months to see ‘Little Women’ on Amazon,” Hashmi said. “It cost just a fraction of a movie ticket and I even popped my own one-dollar popcorn.”

With self-quarantine upon us, Verde decided to offer some movie suggestions — streamable ones, for obvious reasons — that are available on Netflix.

To start, a classic: Sergio Leone’s 1966 spaghetti western, “The Good, the Bad, and the Ugly.” This fable stars Clint Eastwood as ‘The Good,’ Lee Van Cleef as ‘The Bad’ and Eli Wallach as ‘The Ugly.’ It’s easy to chalk up each character to their on-screen monikers, but, as human morality often is, the truth is much more complex.

Next, we suggest Martin Scorsese’s “Taxi Driver.” This 1976 neo-noir psychological thriller presents the viewer with the rare opportunity to experience life through the eyes of a lonely, hubristic man who has yet to find any meaning in his life. Travis Bickle, brilliantly played by Robert De Niro, serves as our existentialist vessel in exploring the gritty, grimy streets of New York City.

“There Will Be Blood” is a 2007 historical drama directed by Paul Thomas Anderson. In one of his best performances to date, Daniel Day-Lewis plays Daniel Plainview, a ruthless and ambitious oil prospector. Set during the 20th-century oil boom, the film follows Plainview as his lust for success drives him towards self-destruction, culminating in one of the deepest gut-punch endings in cinematic history.

“Her” is a 2013 science-fiction romantic drama directed by Spike Jonze. Left heartbroken after his marriage ends, Theodore, played by Joaquin Phoenix, becomes fascinated with a new operating system which reportedly develops a personality. At its core, “Her” is a love story — one that depicts the blossom and decay of a relationship not between two people, but between a person and a program.

The highly stylized 2017 slice-of-life drama, “The Florida Project,” directed by Sean Baker, stars William Dafoe and an astonishing child cast fronted by the then 7-year-old Brooklyn Prince. This tender and authentic tale of American children living in poverty glistens with youthful joy, as the camera never strays far from the children’s cherubic point of view. But like the vast majority of moving and enduring stories, “The Florida Project” slowly and painfully reveals itself to be a tragedy — a tragedy coated with the pastel-pink veneer of Disney World magic.