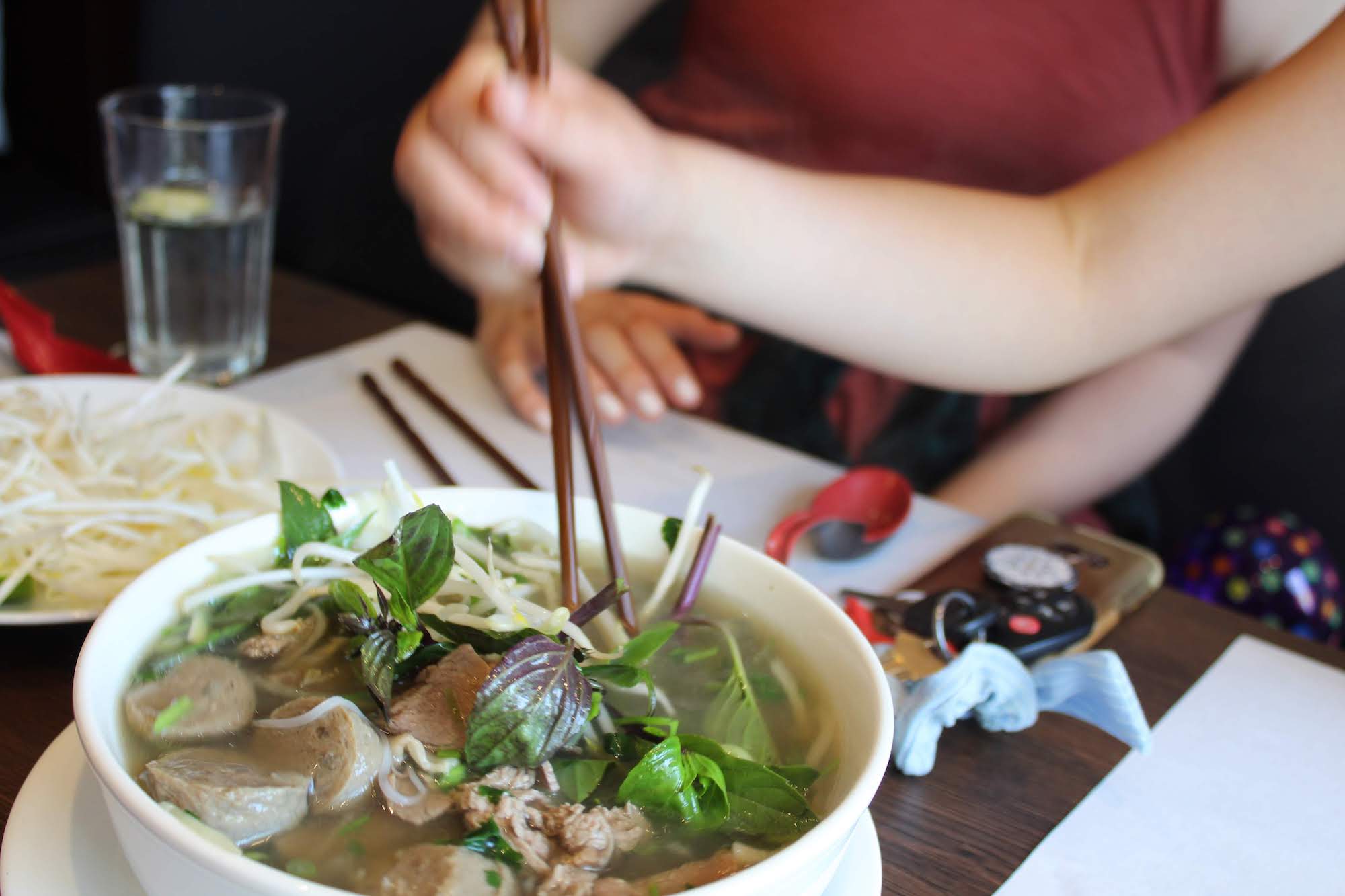 “When I was little, I didn’t have money to eat pho and banh mi, it was so expensive,” restaurant owner Jade Luong says. “I had the dream to become a person who could sell pho and banh mi for all.”

“I had the dream to become a person who could sell pho and banh mi for all.”

Amid the modern decor, elements from Luong’s past make subtle yet sentimental cameos — bowls of ginger and auspicious tangerines populate empty nooks, and a model bicycle with stray wheels is mounted to the wall.

“This bike reminds me to work hard,” Luong says. “The symbol for the wheel is [that it’s] turning like a clock — turning slowly and starting slowly to become successful.” 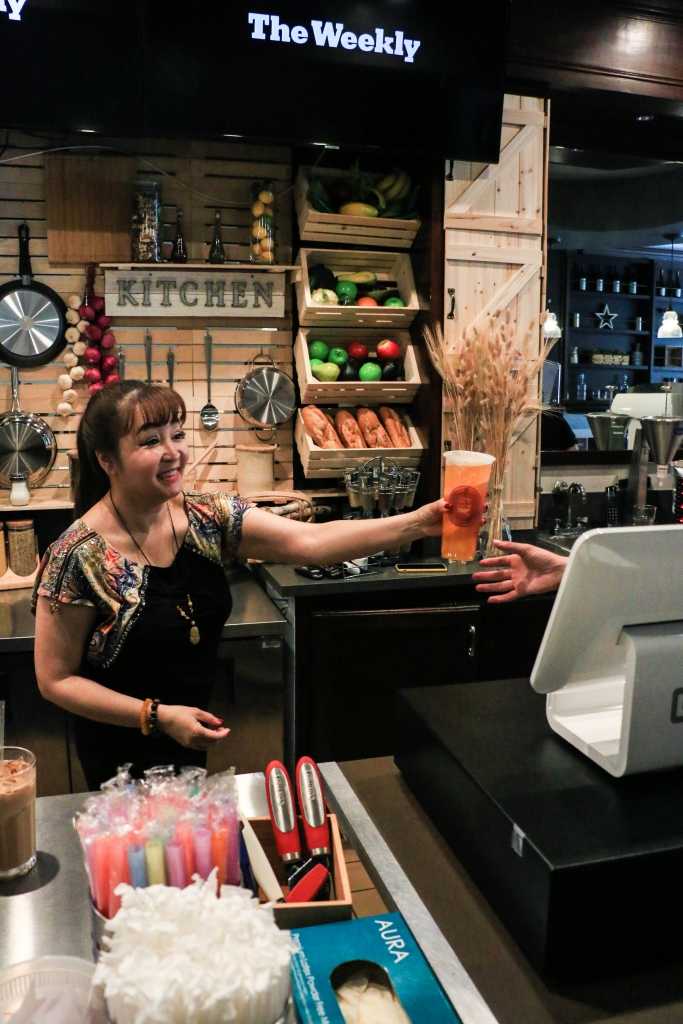 Luong’s day begins before dawn: at 4 a.m. each morning, she arrives at Pho Banh Mi to start cooking the day’s batch of broth. Six to eight hours later, the fragrant smell of chicken and beef stock greets customers arriving for the lunch rush.

After the restaurant opens for the day, Luong travels to Green Bakery & Cafe in Los Altos, another Vietnamese-inspired venture she opened two years ago, and checks in with the staff. On some days, Luong says, she will make more than one trip between the restaurants to ensure that everything is running smoothly.

“She had a vision about family cooking here,” Pho Banh Mi co-owner Son Vo says. “She doesn’t cook overnight. She prepares the soup and everything in the morning so it’s fresh when it comes out of the kitchen.”

The menu is a reflection of Luong’s roots — featuring comforting Vietnamese classics, every meal is something she would cook for herself at home, and the collection of recipes is passed from the previous generation of Luong’s family.

“She doesn’t cook overnight. She prepares the soup and everything in the morning so it’s fresh when it comes out of the kitchen,”

In many ways, Pho Banh Mi itself is an extension of this homey mentality. Luong describes it as an untraditional family-run business. Though the small staff is unrelated, their 10-plus hours a day working together contribute to a tight-knit community.

“We look a family, we work like a family,” Luong says as she gestures with a smile to the servers and cooks in the bustling kitchen.

It is this ethos of warm camaraderie and earnest striving that’s gained the restaurant regulars just weeks since its opening. However, Luong notes that the duo is still incorporating feedback from customers to perfect their dishes before the restaurant’s hard opening.

“I want to bring food and pho to the people here,” Luong says. “But more importantly I want people to come here and tell me what kind of food they like to eat.”

Below are Verde’s takes on some of their trademark offerings.

Namesake aside, it’s no wonder pho is the signature offering of Pho Banh Mi. Between satisfying spoonfuls of aromatic broth, slurps of infinitesimally thin rice noodles and bites of tender beef, the Pho Special exemplifies what a noodle soup should be. Simmered together for eight hours, the subtle flavors of the broth complement the smoky sweetness of the filet mignon, brisket and steak slices. Perfectly sized beef balls are a savory and chewy addition to this heartily sized bowl of steaming pho.

STEAM A spicy, sizzling bowl of pho brims with seafood and spices. Photo by Zoë Wong-VanHaren

For culinary mavericks, the Pho Seafood offers a tangier alternative to its classic counterpart. Chewy bites of squid, boiled shrimp, shucked mussels and fish fillet swim in a fragrant broth seasoned with scallions, lime and a hint of spice. The ample helping of thin rice noodles absorb the piquant flavoring of the soup despite their delicate structure, providing sweetness with a fragrant kick.

With tufts of lettuce and colorful herbs poking out from around thin slices of beef, bundles of vermicelli noodles and apple slices, the Lemongrass Beef Rolls offer a refreshing accompaniment to the savory bowls of pho. Despite the smorgasbord of ingredients in each rice noodle-wrapped bundle, the rolls are relatively bland unless dipped in the accompanying fish sauce vinaigrette. The uneven distribution of lemongrass in the rolls also contributes to their overall grassy flavor. 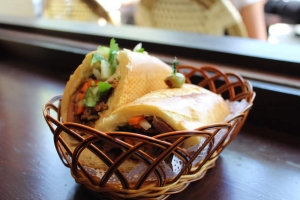 A staple of Vietnamese street food, the Grilled Pork Banh Mi fuses cultural and culinary influences alike in a tempting convergence of flavors and textures. Pillowy slices of french baguette envelop finely sliced slivers of pickled carrot, daikon, cucumber and jalapeno in this elevated sandwich. Succulent morsels of juicy pork complement each crisp bite of the fresh vegetables. Smeared across each of the banh mi’s crunchy bookends is the restaurant’s signature house mayo, which incorporates a unifying element of creaminess.